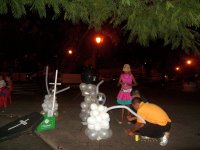 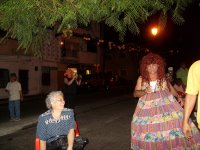 Xiomara decided to have an American style Halloween Party for all the neighbors in the park. Well, it didn’t work out as planned

She made all these balloon decorations and put them in the park and Colmado Arca.

People said they would get dressed up, but, oh well, only a few did. Cesar dressed as a fat woman and he was the star of the party. Others just wore a hat of some glasses and that was their costume. 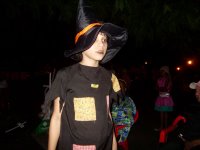 I went as a Cedula (Dominican Republic identification card). Not many people got the joke that my blood was acid and I was from Mars (which I really am from Mars, PA.). But we had a good time anyhow. I couldn’t stay out late as I had to get home and sleep because my trip to USA was the next day and I still had to pack my stuff.