This morning on our walkabout with Buenagente and Inteliperra we walked down to the Dirección General de Dragas, Presas y Balizamiento de la Armada de República Dominicana at Puerto San Souci to look at Rio Ozama. We never thought we would be rescuing a baby Grey Kingbird, also known as a Pitirre. I usually call them Tyrannosaurus Attack Birds. 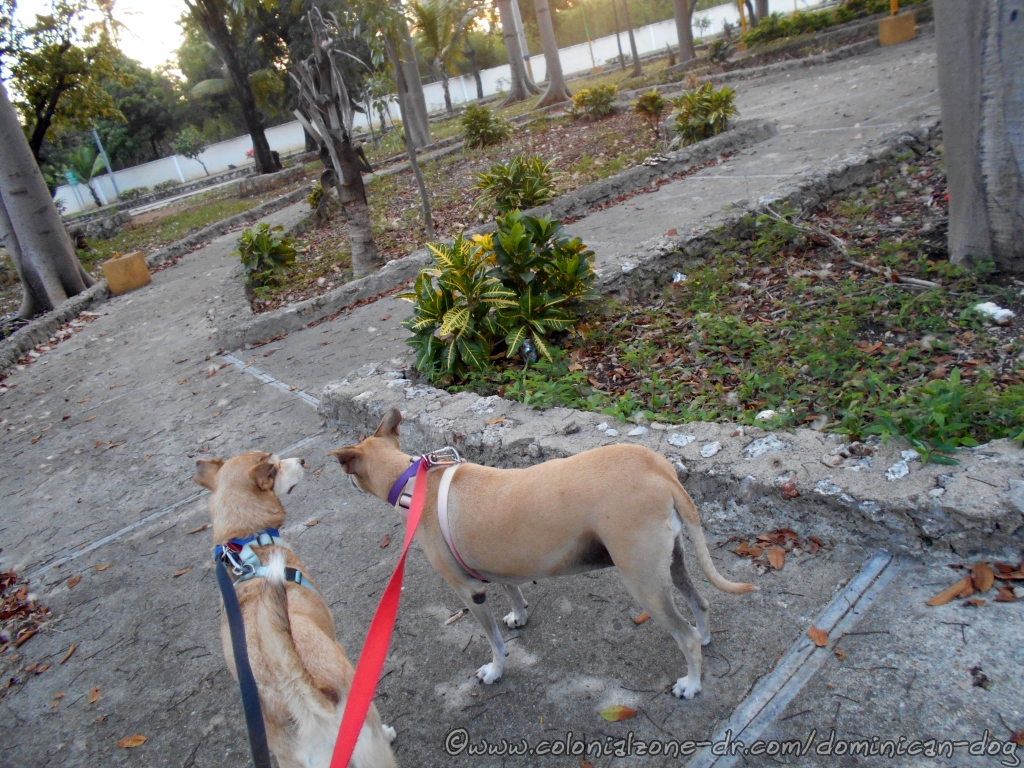 The Dirección General de Dragas, Presas y Balizamiento de la Armada de República Dominicana / Directorate General of Dredges, Dams and Beacons of the Navy of the Dominican Republic is part of a Military Base that is a few blocks from my apartment next to the Port San Souci on Rio Ozama.

The dogs and I went past the guards table and headed down to look at Rio Ozama. There, on the dock was a little bird. It was in a crack next to the water. I bent over to try and get it out of that bad spot and it fluttered off into the river.

It landed on some of the Jacinto de Agua / Water Hyacinth that had broken off and floated downriver during the Hurricane Elsa that passed a few days earlier.

I tried to reach the little baby as its parents were screaming and divebombing the dogs and me.

Let me stop the story here for a second and explain about these birds. Their official name is Tyrannus Dominicensis (tirano dominicano) translated to mean Dominican Tyrant. They are also known as Grey Kingbirds, Sirirí Gris and here in Dominican Republic people call them Pitirre. I call them Tyrannosaurus Attack Birds before I knew their real name and it suits them perfectly. They are perfectly suited to their names. They can be very tyrannical, aggressive and loud. More information and to hear the loud call of the Pitirre – Birds of Columbia. 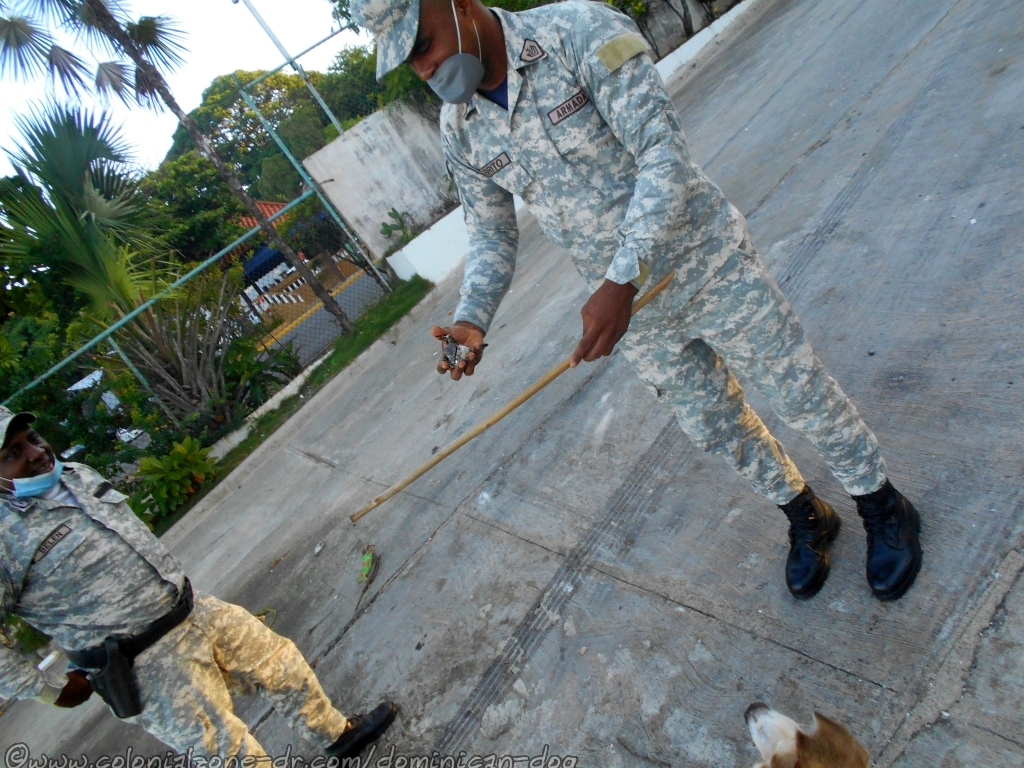 I went over to the guards from the Armada and asked them if they had a net or long stick to save the little bird. They didn’t have anything so I told them that I would just have to go into the river to save a bird. They looked at me like I was crazy. 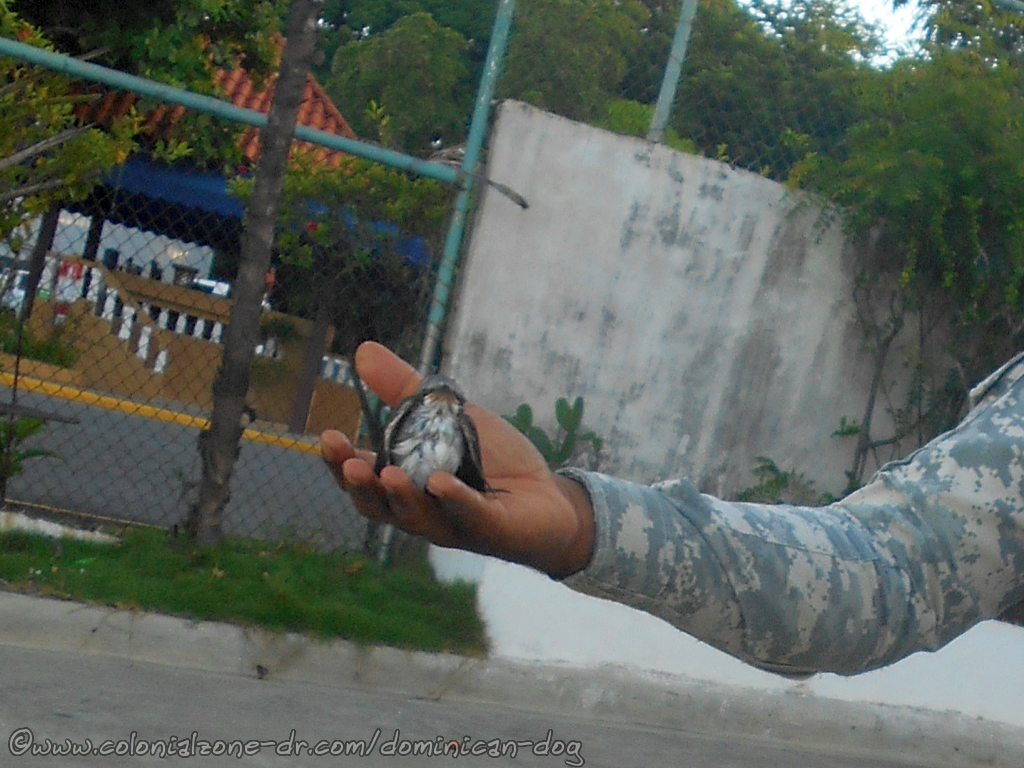 A close up of the rescued Tyrannus Dominicensis / Pitirre baby.

I went back and was looking for a place to connect the dogs’ leashes while I went into the nasty waters of Rio Ozama. the 2 guards came over to see what I was doing. They got a stick which was too short so I gave the man my stick and he went as close as he could get to the water to drag the little bird close. 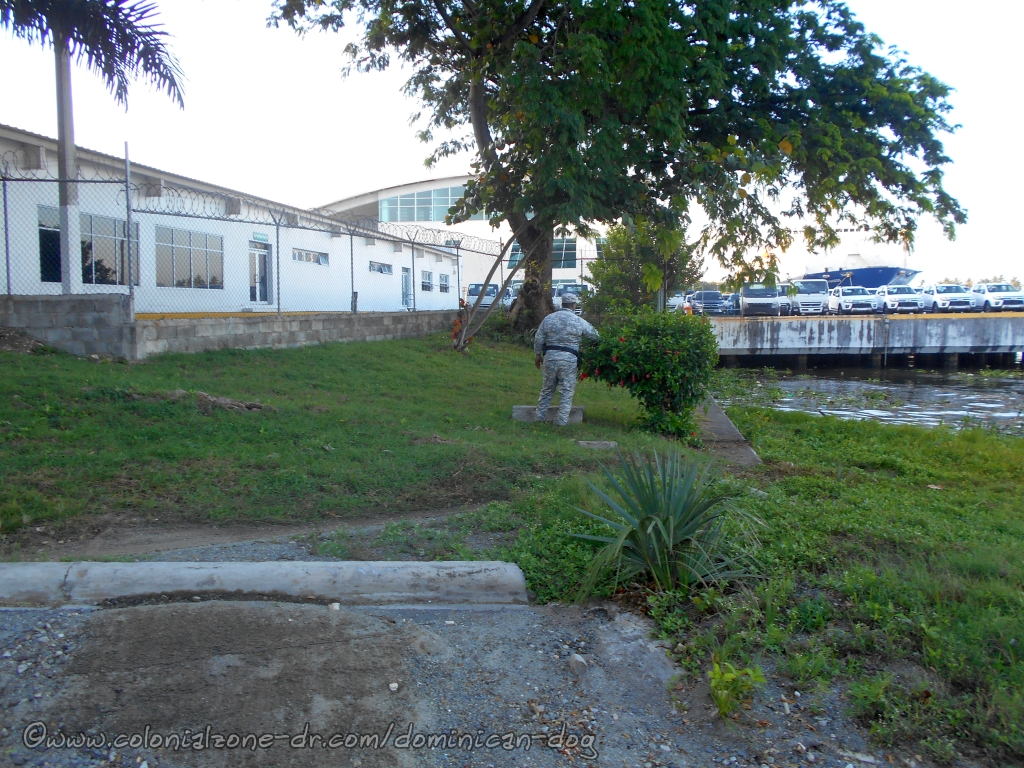 The Guard from the Armada putting the rescued Tyrannus Dominicensis / Pitirre baby in a tree. 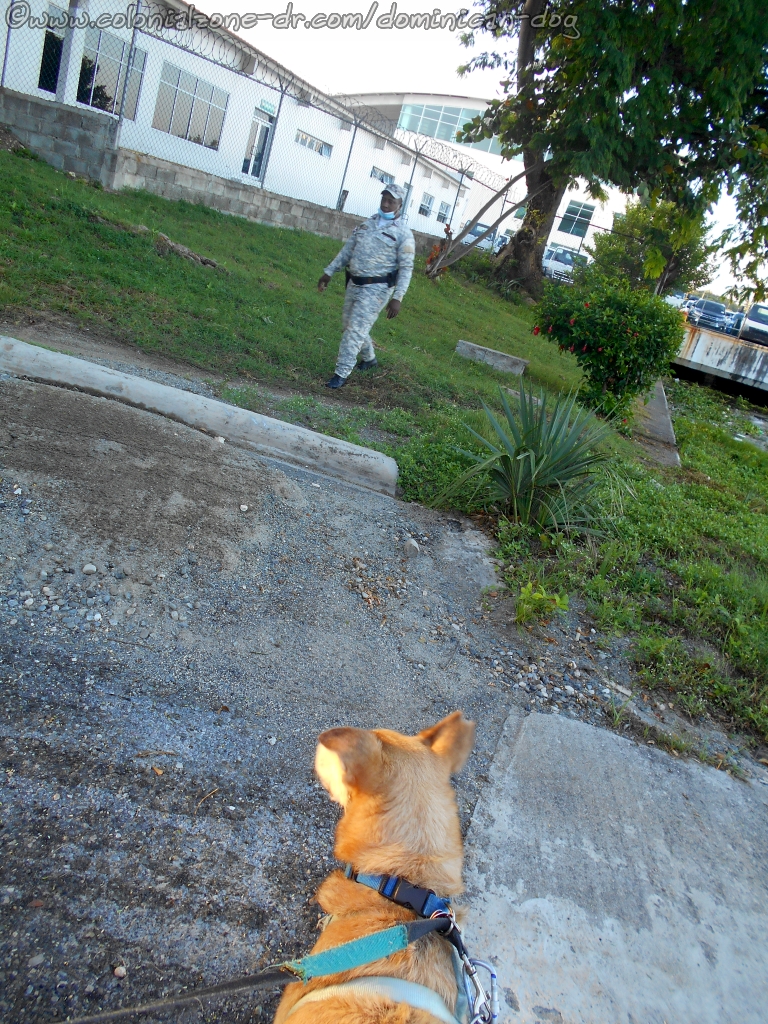 He got the little Pitiree! He handed me the baby and I was looking for a place to put it. The guard took the baby and put the little bird in a small tree. All was good and the dogs and I headed back up the hill. But, the mom and pop birds were still following me and screaming at me from the treetops. They must not have seen where their baby went. The parents were not happy. 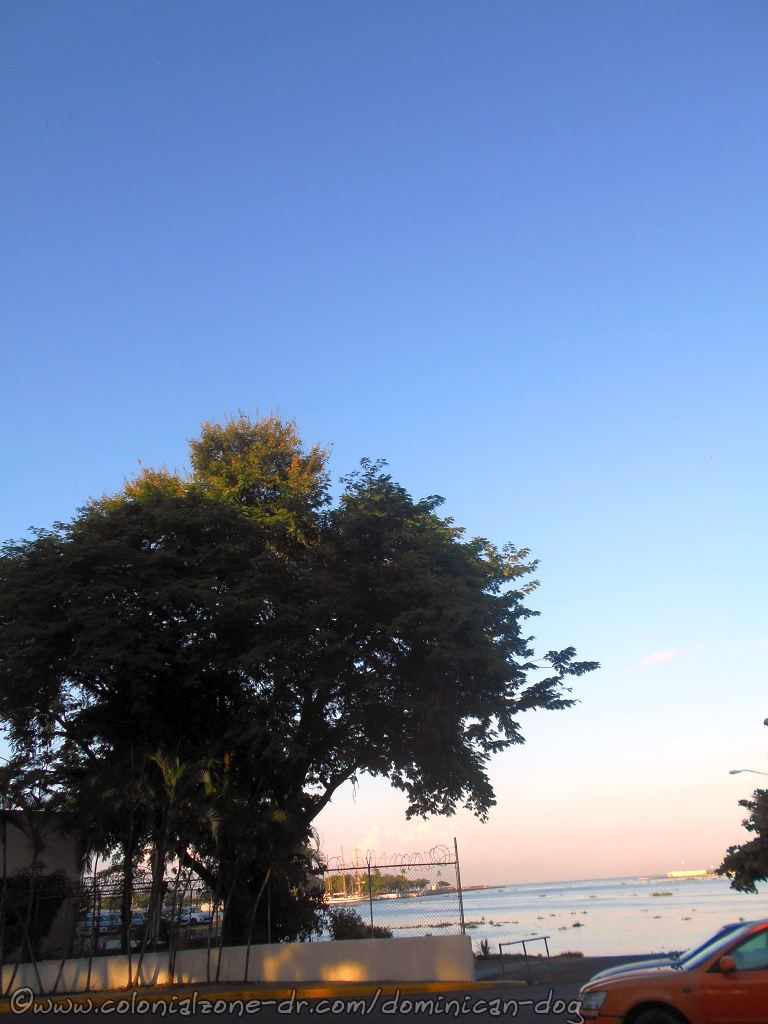 The parents were watching and screaming during the rescue of the baby Pitirre at the Puerto San Souci on Rio Ozama. 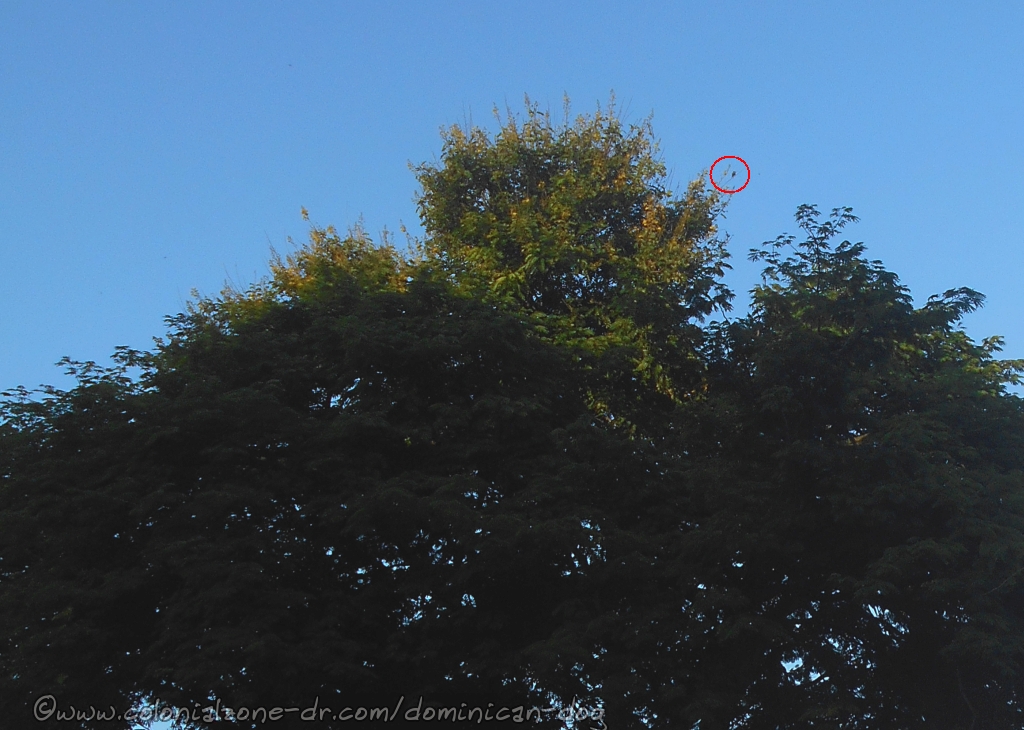 One of the watchful parents on the top of the tree screaming at me and the dogs during the rescue of the baby Pitirre.

The guard guys came out and were watching the bird parents flying at me. One of the men went and got the baby out of the tree and held it up for the parents to see. Thank goodness they saw their baby. He set the baby on the top of a wall and left it there. The parents were flying around the baby and screaming. They had their baby back and hopefully, the flying lesson could continue until the baby could return to the nest.

It was a good morning and a great start of the day. 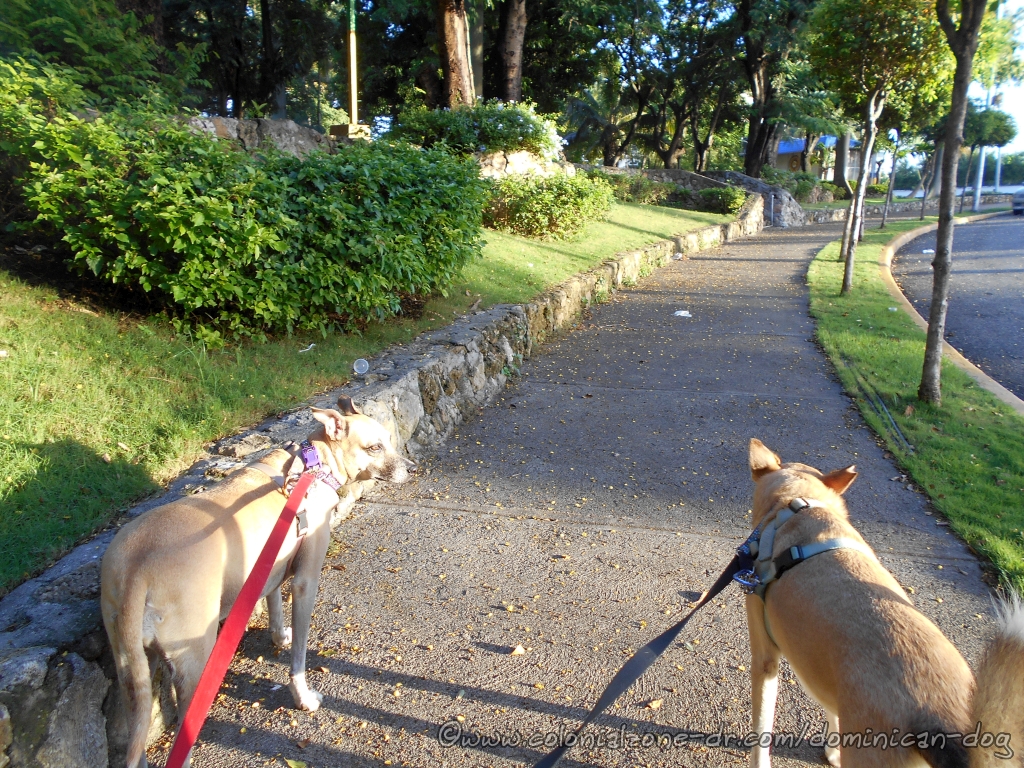 Inteliperra and Buenagente on the sidewalk of Parque San Souci after the big Pitirre Baby Rescue. It was a good day.

Here is a story by Inteliperra on the Dominican Dog Blog Attacked Twice In One Day about the Pitirre attacking her and other animals.