There was a lone man walking down Arzobispo Meriño this morning. He kept stopping, dropping his arms to his side looking around in awe.

The man looked up the streets and down the streets. He looked up to the tops of buildings and back down. Admiring and enjoying the sights around him. Saying “WOW!” every place he stopped.

I watched him walk up the street towards me. He stopped often looking around. As he got closer I heard him stop and say “WOW!”. The dogs and I stood and watched him as he passed us.

The man stopped at an intersection. He looked towards Plaza España and said “WOW!” I got behind him thinking there was something amazing happening.

The only thing I saw was the beautiful view of the sky getting brighter, the street and Plaza España with the Faro a Colón in the distance. 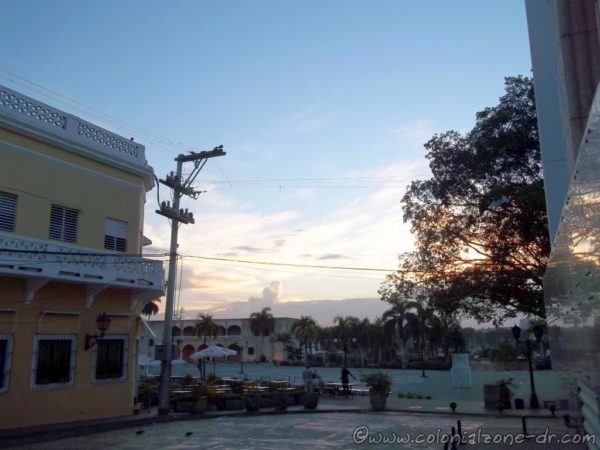 The view of Plaza España from the street.

The man then looked in the other direction. I heard another “WOW!”.

He then stopped at the next building. I heard another “WOW!” as he stopped to appreciate the old building. He kept stopping, looking and saying “WOW!” until I lost sight of him.

The WOW was a soft, sort of drawn out. It gently slid out of his mouth like an exhale of air. He was in complete amazement with the world around him.

Mr. WOW made me stop and think. I needed to re-appreciate all the things is see daily in life that I take for granted. I need to see my environment through fresh eyes.

Try and follow the example of Mr. WOW. Take your time and have a “WOW!” moment. Stop to appreciate the little things in the world around you. Enjoy all the gifts, large and small, that the world has to offer.

Mr. WOW (circled) as he wows his way down the street.