It was time again to renew my Dominican Republic Permanent Residency (Residency Definitivo). I am a legal immigrant. I like to say I am a legal alien since I am from a small town called Mars in USA. The alien joke always makes me chuckle.

Every 4 years I need to renew residency so I can be in the country legally. This renewal seemed like it would be very fast and easy. Keyword..SEEMED. I was so badly mistaken.

I was ready to renew my permanent residency at the beginning of October but I had to wait for some money to be returned that I lent to a friend. In the meantime I went online to the Dirección General de Migración web site and set up an account. All nice and easy except it would have been easier if I could have changed the language to English.

I then walked to BancoReservas and paid (RD$600) for my good conduct report. I put the information in the web site and right away it came back approved. I had to print it out.

I got a friend to take me on his motorbike to get my little pictures (RD$150). All good and I sent them to migration.

All the things that Migration wanted were deposited via their website on Oct. 20, 2018. I then had to wait for a notification for the date of my appointment.

I waited and waited. Almost a month had passed and still nothing. I called a lawyer friend and asked him about it. I don’t know what he did but he sent me the document that I needed and told me to go to Migration. Everything was ready.

I went and made the copies they asked for, 3 of everything, and headed to the migration office via motoconcho on Nov. 19, 2018. All went smooth. I paid the fees. RD$16500 for Migration and RD$4500 for the medical exam. The motoconcho waited for me and he then took me the hospital Migration uses and I got my chest xrays and blood taken. I was told all would be ready and to go to Migracion after 10 working days.

All good or so I thought. 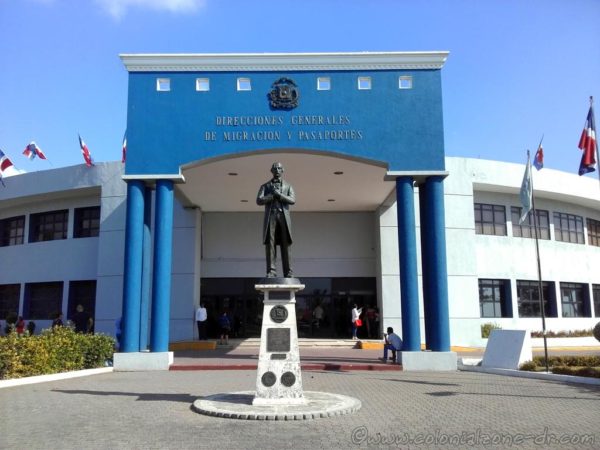 The Migration Office – Direcciónes Generales De Migración y Pasportes and the statue of Juan Pablo Duarte at the front entrance.

After about 6 days I got a call from the medical department telling me that I needed to go to another place and give more blood. Just like the last time I renewed. So I called my motoconcho friend. We finally found the place and on Dec. 3, 2018 I gave more blood.

I was told to call the Migration Medical Control Department in 5 days. I called and they said to call back Dec. 11, 2018. I did. No answer. I called and called for at least a week and never got an answer. Called my motoconcho driver and we went to Migration again on Dec. 19, 2018.

Migration told me I had to go to Control Medico Migración in Malecon Center. So my motoconcho took me there. I knew they found my Hepatitis C. I was so depressed. I thought they wouldn’t renew my residency. I was afraid. But the lady told me not to worry (yeah right, easy for her to say). She gave me a note with a list of things I needed to get done and return to her after I had all the information she asked for.

The motoconcho drove me around to all different places to try and find places inexpensive to get all the labs and tests that Migracion wanted. We ended up at Hospítal Docente Dr. Francisco E. Moscoso Puello at their Gastroenterología Department. They said they could do the sonogram (free) and write the letter that migration wanted (free) but I had to go someplace else for the blood work and viral load report and that it was expensive.

The bad thing was the places that do all the tests at low cost or free were all closed for Christmas which ended January after 3 Kings Day. I had to wait until after the holidays feeling nervous and worried the entire time. I had nightmares that I had to leave the country and abandon my dogs Inteliperra and Buenagente (which I would never abandon my dogs). I woke crying a few times because of this.

The place ended up being a little further than a few blocks away and it was not as easy to find as I was told. Finally a lady I asked said she was walking near there and she would walk with me. It was Amadita Laboratorio Clínico. I had to pay cash for the tests. RD$7405. Thank goodness I saved my Christmas present money. Got the tests done (the lady had a hard time hitting my vein, wiggling the needle around in my arm trying to hit it, I had a nasty bruise) and they were ready later that day.

I did not have enough money with me for a taxi home so I asked a man in front of the lab the best way to get home. He took me to a bus stop and told a man there to help me to get on the right bus. The man was going to the same area I was headed to. I got on the bus and ended up at the street in front of my apartment for RD$50.

I went to pick up the blood work on Jan. 14, 2019. Then I headed back to Hospital Moscoso Puello, all via motoconcho, for the abdominal sonograph. I had to wait a few hours (I couldn’t eat or drink before the sonography so waiting was not the easiest thing) but got it done and had the results. I went upstairs to the Gastroenterología Department where they told me they could do the letter that I needed to take to Migration Medical Control Department and waited my turn. I was last in line. They copied the tests and told me they would call me when they had the letter ready.

As usual, I didn’t have enough money with me for a taxi or motoconcho home so I had to ask around and found a carrito (public car).

The driver was a nice guy and spoke English (deported from USA). He took me as far as he could but realized that it was nowhere near where I needed to be. He and a few police found a guagua (large van with seats). The carrito driver even paid my RD$25 fee. I ended up at some other place where I had no idea where I was. Finally, a carrito passed by and the other drivers waved him down and he was really nice too. He changed his route a little and dropped me off on the street in front of my apartment. Instead of paying RD$300 for a taxi it cost mt RD$50 and lots of laughing and confusion.

The doctor at the Hospital Moscoso Puello called and said that the letter I needed was ready. I got a motoconcho there and back and on Jan. 28, 2019. I got the letter that I needed to take to the Migration Health Department.

Remember, all this moving around costs money. I had to wait until I had more cash for transportation. But, I finally returned to Migration Medical Control Department with my tests and letter on Feb. 14, 2019 via motoconcho (RD$300 there and back home). The motoconcho driver waited for me because I thought I could head to Migration after. But NOOO! They said all was good and to return in 4 days for the letter to take to migration.

I finally gave my documents to Migration (I didn’t have to pay late fees thank goodness), sat there and waited to be called to get my picture taken. I got into an interesting conversation with a man and his wife from Wisconsin. They are Mormon Missionaries here. He was raised in DR because his parents were missionaries. Now he is returning with his wife and 2 children. We had a very nice conversation that made the waiting easier.

I was called in for the picture for my ID card. I waited for the card and after 3 hours I was off to get my cedula. 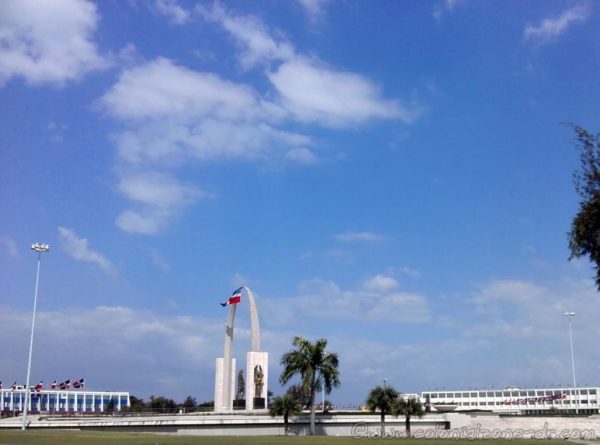 The Plaza de la Bandera near the Junto Central Electorial where I got my cedula.

The cedula cost RD$4000. The taxi to the Junto Central Electorial was RD$300. It took maybe 1/2 hour to get my cedula Very fast and efficient. I then realized I didn’t have enough money to get a taxi or even a motoconcho home. I asked around and found there was a bus that would take me to Ave. Mexico near Barrio Chino (Chinatown) and it only cost RD$25. I was off in a guagua again.

I had a fun ride talking and joking with other riders. They dropped me off right where I wanted to be. The cobrador (money collector) tried to get me for an extra RD$25. He said Americans always give a propina (tip). I told him there was no way, I was Aplatanado and I don’t tip and I needed that $25 to get the rest of the way home. He was not too happy. I got a carrito where the guagua dropped me that passed on the street in front of my apartment. Another RD$25 and I was home.

*What it cost me with transportation, all the medical stuff and the regular Migration fee RD$37005 (about US$740).

It was a costly renewal this time. But it is good for 4 years starting from Feb. 18, 2019. I was so stressed out for those 4 months. I did have some new experiences. Using a motoconcho, riding in a guagua and carritos and having no clue where I was going. I learned where some things were and how more things here worked. I found a new liver doctor and maybe now I can get the meds I need to get well. I didn’t get many pictures. Taking pics was the furthest thing from my mind during most to this adventure.