I have written before how much Dominicans love their roosters. They are sometimes as much a part of the family as their children. Here in DR Cock Fighting is still a widely accepted sport.

There was an animal protection law passed last year and the only way they could get it passed was to make an exception to permit rooster fighting. We cannot hurt a dog or any other animal but it is legal to fight chickens to the death. I do not agree with this but it is part of the culture here and in many other countries. Well, back to my story.

As usual my live is mainly occupied with the dogs in the Colonial Zone area. Teli and Buenagente are the main kids who I lovingly call “The Guardians of the Zone”. They have their own blog, The Dominican Dog Blog, and their own facebook page with the same name, Dominican Dog Blog.

The other dogs that most frequently join in our pack are Zippy, Beza, Julio. Here is a picture of them playing together in a sand pile a few days ago. 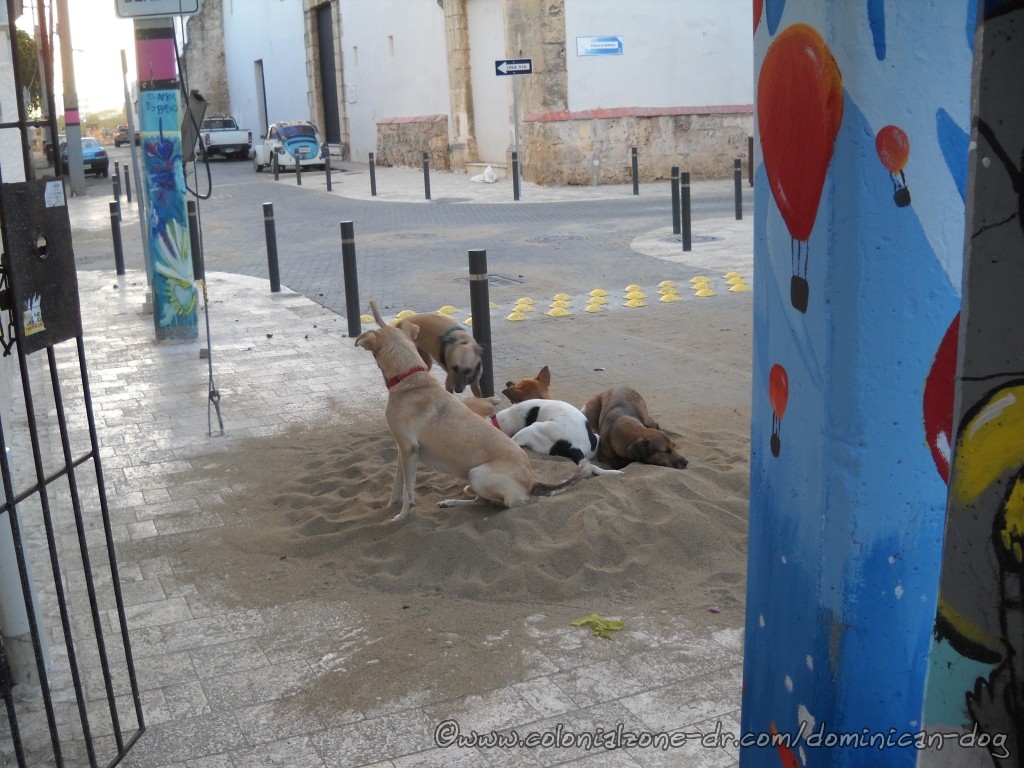 I keep getting away from my story..back to the rooster..

This early morning the kids and I were walking down Calle Isabel la Católica where they are still doing the remodeling of the Colonial Zone. Passing the parking lot of the Hodelpa Hotel the metal bar road block was down. There is a sign that reads “Parqueo exclusivo para clientes” / “Parking exclusively for clients” on the gate. There, parked in the lot, was a rooster. He was just hanging out not bothering anyone. He had a string attached to his leg with a small stone tied to the end or the string to keep the bird from taking flight, a normal sight here in DR.

I thought it was too funny that the rooster was parked in the lot for clients only as if he was a client. I had to take a picture.

As I got the camera out the dogs saw the rooster too. Beza, a Fox Terrier Mix, a breed known for killing small animals and rodents, went for the rooster that still had the rock dangling from its skinny little chicken leg. 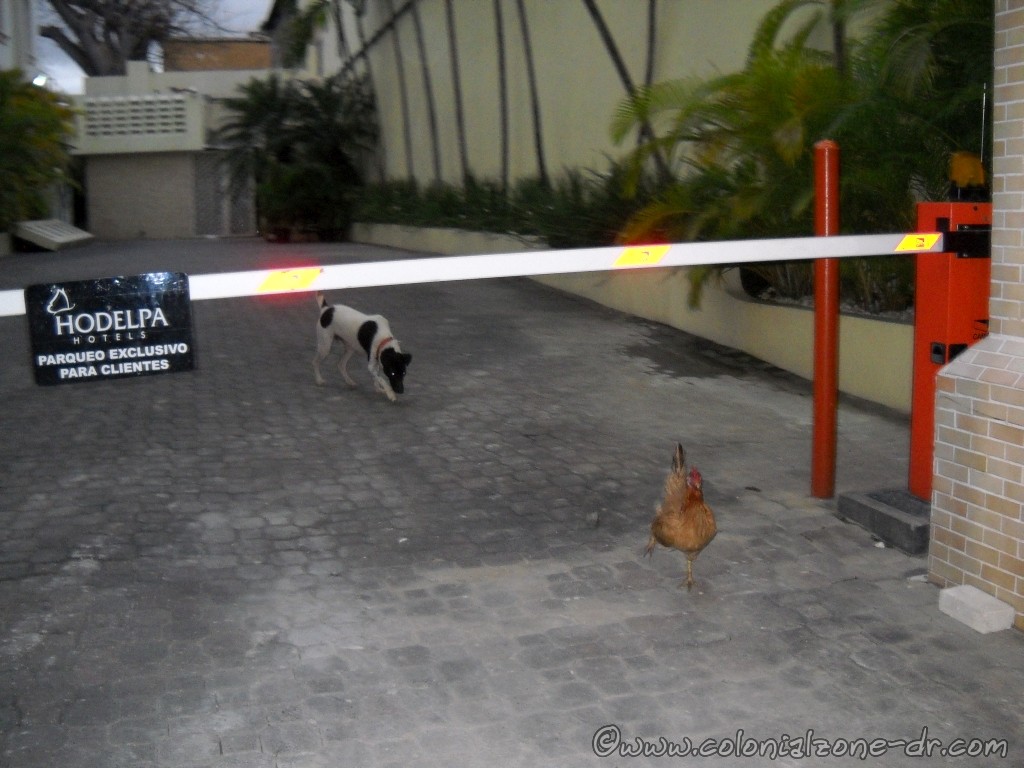 Rooster in the hotel parking lot.

The rooster Jumped and squawked in fright, baagggaahhhkkk. He ran. Beza ran. Teli and Buenagente came running. I ran. We all ran. Me chasing after all of them.

The dogs were trying to attack the rooster and I was trying to save the poor thing before it got caught or had a heart attack.

I would bend down to get the frightened rooster then a dog would get there right as I bent down, then the rooster would run, then I had to run to the next spot where the bird stopped and stoop (I am not a fast stooper because of my very unhappy back) to get it while the dogs were in hot pursuit. The rooster clucking, me stooping every few steps. The bird fluttering his feathers in my face. Dogs running and barking acting all brave until the rooster jumps and tries to take flight then they back up all the while barking crazily (chicken dogs..lol).

I am sure we looked very comical to my friend Miguel and his wife as they came out of their balcony to see what all the ruckus was. The rooster was clucking loudly with wings flapping, dogs barking and running and me running behind stooped over with my arms out in front ready to scoop up the frightened rooster yelling “NO” to the dogs while laughing at the situation.

I finally caught the rooster. I got him nestled in my arm against my body while the dogs gathered around me trying to figure out how to access the poor bird.

Now what was I going to do with him?

I could not let him loose again with the dogs and cats in the street all waiting to get some fresh meat. I could not take him home. What would I do with a rooster in my little apartment with all the dogs too? Oh yes, I was in a pickle (I would have preferred a pickle, much easier to manage and just as tasty). 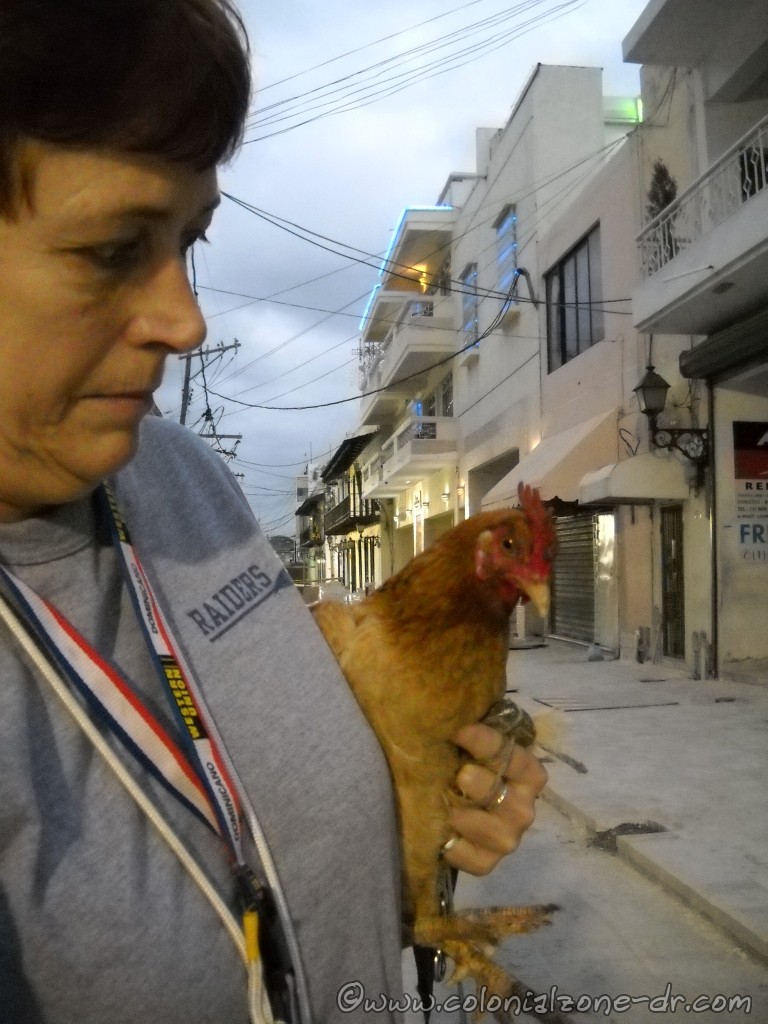 Me and the trouble causing rooster

Thank goodness Miguel’s wife came to the rescue. The rooster belongs to a boy about 15 years old. He went to school around 6AM and his rooster must have got out and he did not know it.

We put the rooster in the stairs of the building where she lives and closed him inside until the boys family woke or until he came home.

Sheww..and all this happened before 6:30AM. I wonder what the rest of the day has in store for me.