Yes we do have power outages here. Yes we do have transformers blowing up from time to time. Welcome to the DR. It is just part of life here. Accept it. Getting upset does not help so you learn to just try and relax as best as you can.

The beginning of this week around 8PM. Out went the lights!

I called EDEESTE (the electric company) to report the outage.

I was just shutting down the puter to go to bed so it was no big deal other than not having a fan. I figured that in a few hours the electricity would be fixed and all would be good. I even left the fan on so I would have relief as soon as the electric was restored.

I was wrong. Sweating. Tossing. Turning. All night. The electricity did not come back.

I took Teli out to play with her friends around 5:30AM hoping that when we returned there would be electricity. I tried not to think about it as the kids were running and having fun at the Fortaleza Ozama. 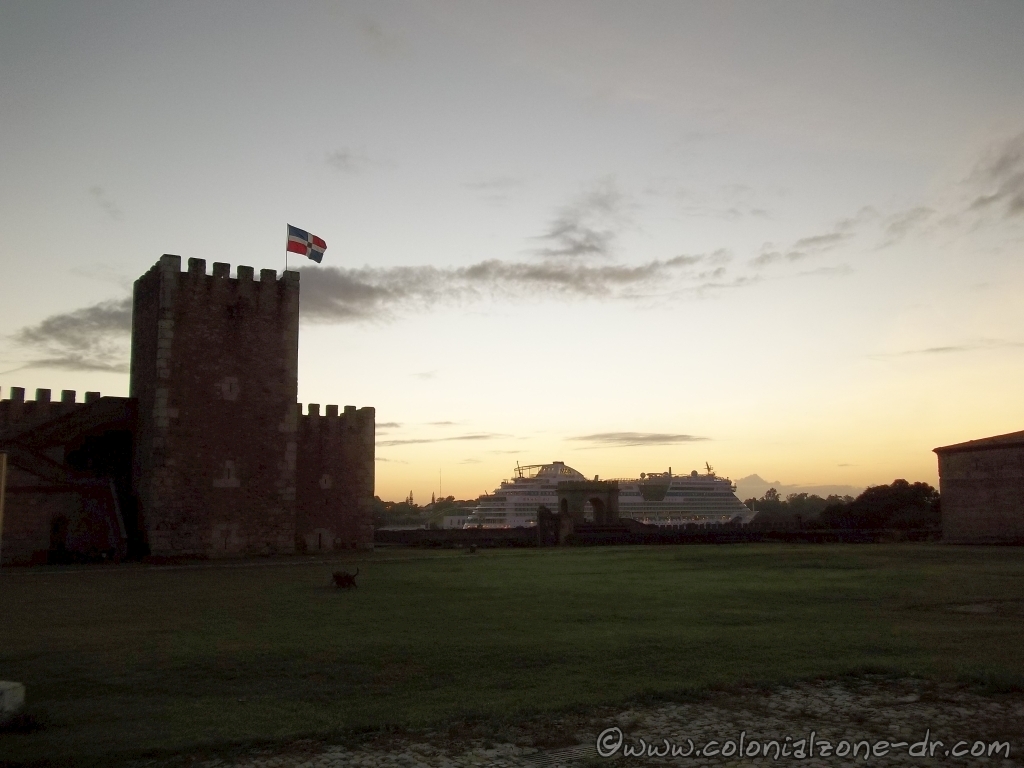 Teli and friends playing at the Fortlaeza Ozama with the AIDA cruise ship in port in the background. 5:30AM 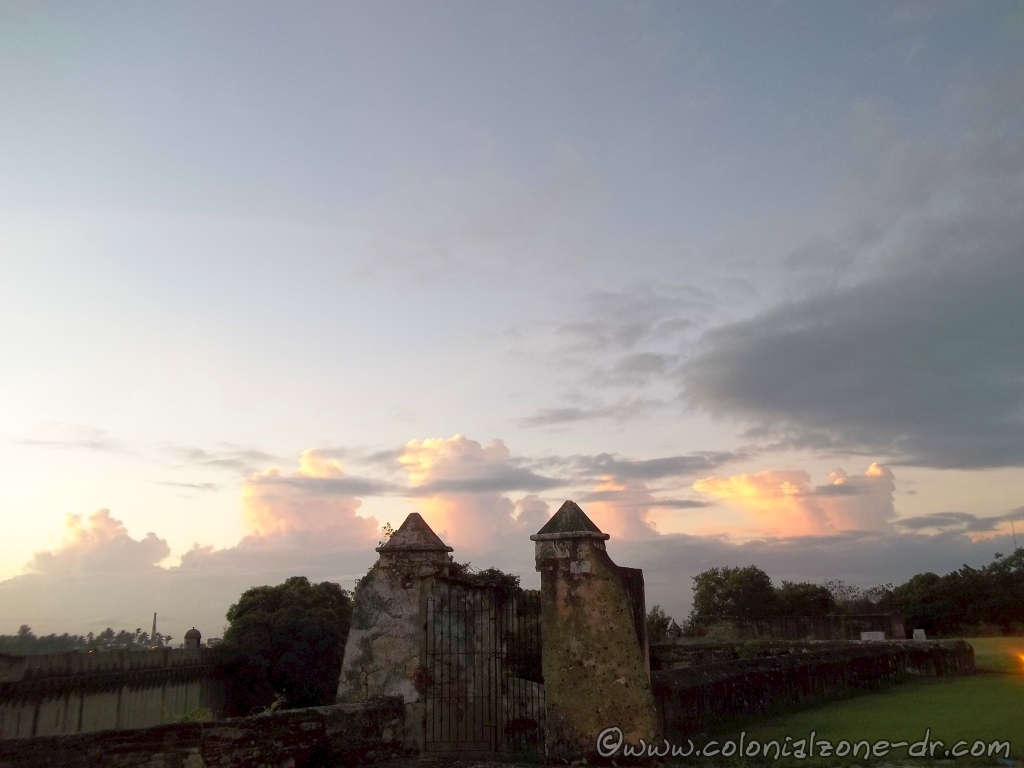 Of course, I had a discussion with the neighbors about the situation before going back home. They said that something happened to a transformer in front of the CODIA building.

One neighbor was screaming and yelling and “getting her bowels in an uproar” (as my Maw used to say) as she passed by in the street.

We all made calls to EDEESTE. I called again. They told me they had men on the way to work on the problem.

Teli and I came home.

I wanted to eat breakfast but did not want to open the door of the fridge. So I made coffee, had some fruit and peanut butter crackers.

I cleaned up a bit. Then I went to read for a while.

Finally around 9AM I called the Colmado for a bag of ice to put inside the freezer to try and preserve my food.

Around noon I was just so tired of reading and playing games on the Kindle. I decided to shower and go outside to see what was going on in the world.

When there is no electricity the pump cannot run to get the water up to the 3rd floor or the 6th floor water tanks on the roof. It was bucket shower time.

Teli and I headed to sit in Parque Duarte picking up a few of Telis dog friends on the way. Lola and Zippy joined us.

There was still electricity in Parque Duarte as they are on a different circuit.

Just as we got to the park it started to rain. We all headed for cover inside this tiny Colmado. The 3 dogs had to go inside too.

We all just talked. Discussed the dogs, the rain, the electricity being out and whatever else came up while watching the rain come down. After about 15 minutes the rain stopped. 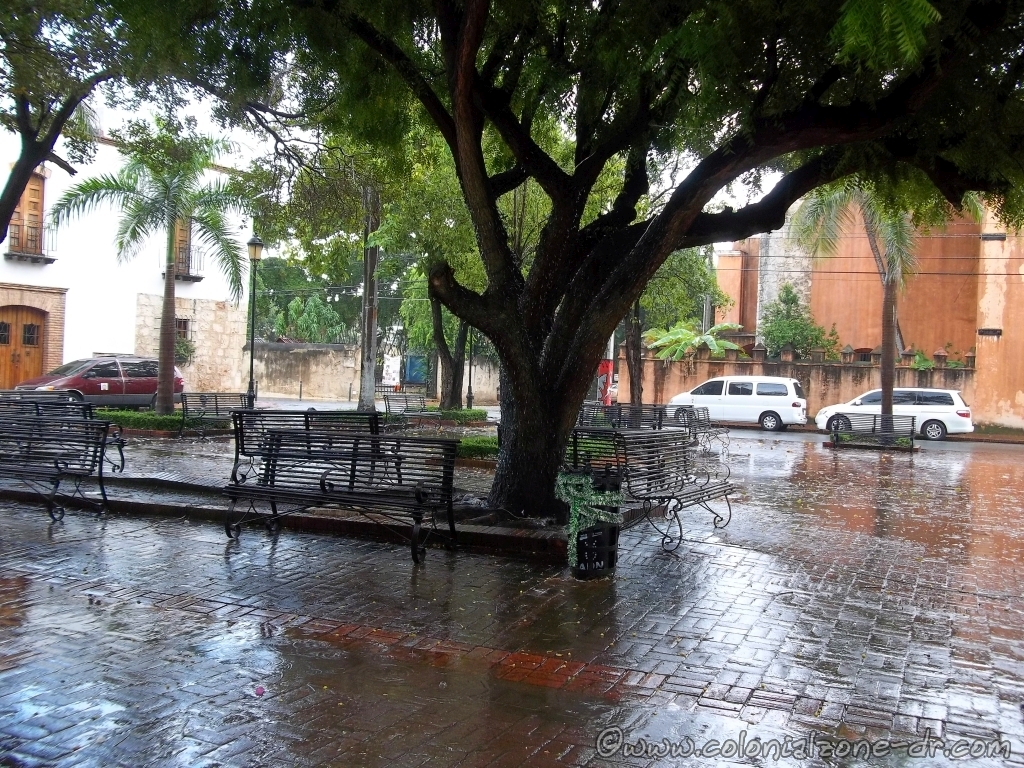 Parque Duarte in the rain

As we were exiting the Colmado there was a big boom! and their lights went out. 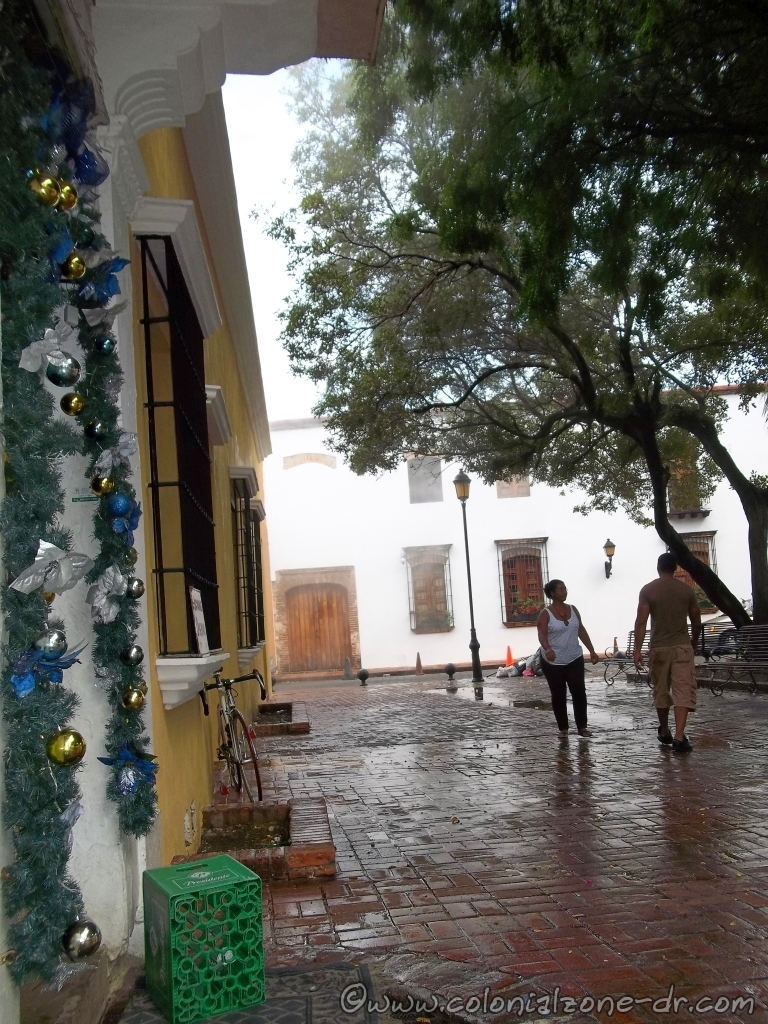 A neighbor came running around the corner. Her friend put his hand on her shoulder and she jumped and screamed. We both started laughing. She was a little jumpy after that first explosion.

We both had to go and see what was happening as a billow of smoke poured down Calle Hostos. 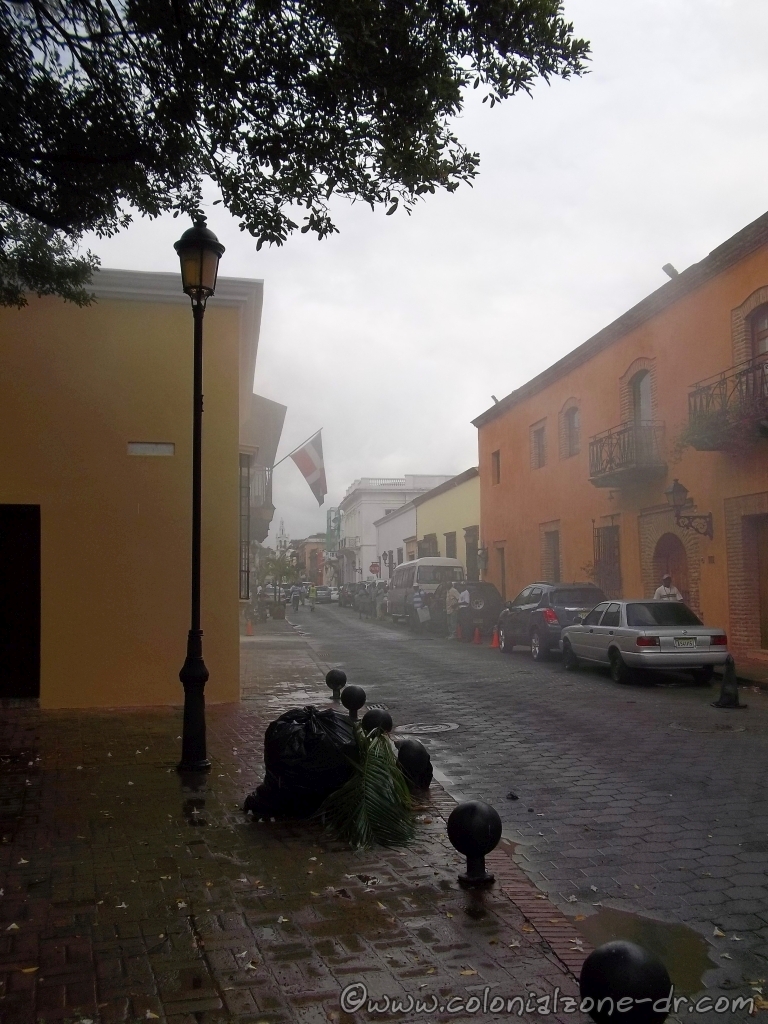 Just then there was another loud boom and some of the people that were getting close to check the first explosion went running. The electric man came running to check because they were just working around the corner on my street trying to fix the electricity there. 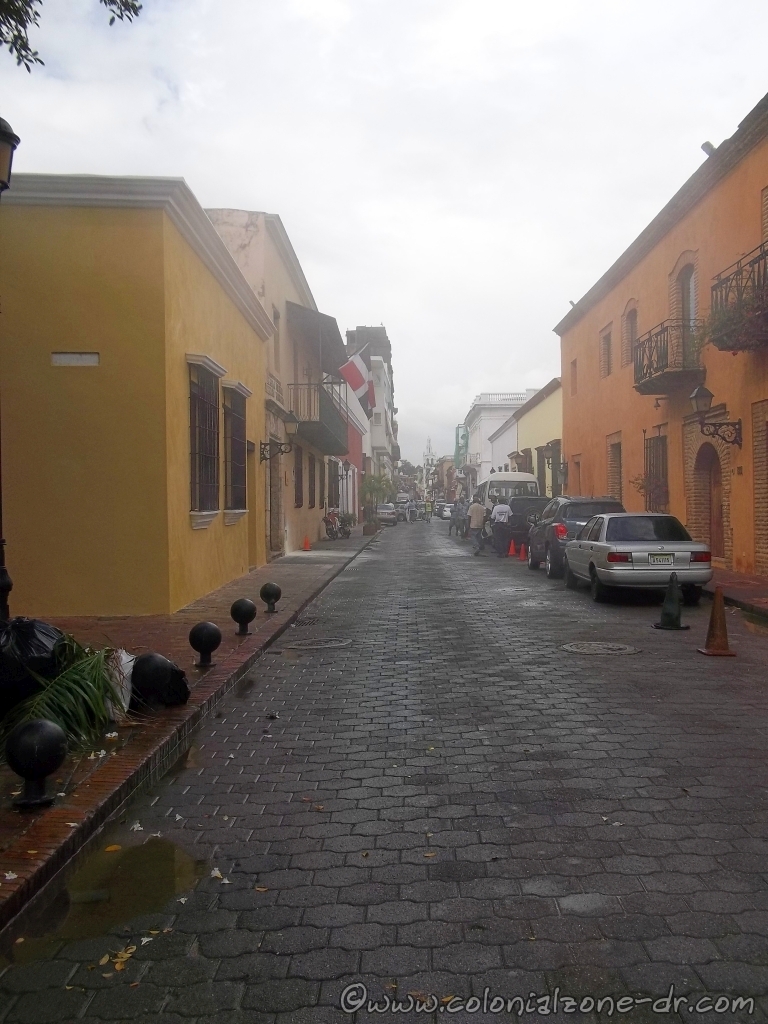 Within 15 minutes all the electricity was restored.

The electric man, Alex, said that when the line blew at the Patrimonio Office they found where the problem was and were able to finally repair the electric.

All went back to normal.

The men returned to their positions at the benches in the park.

The pigeons enjoyed a bath is a fresh water puddle. 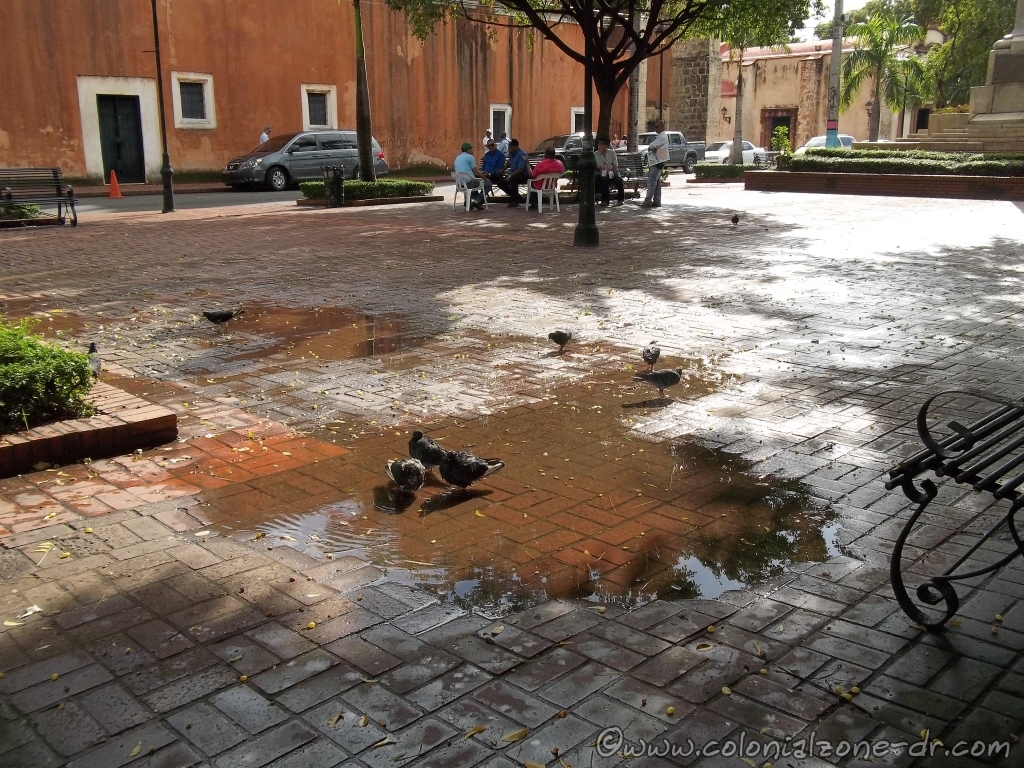 Parque Duarte after the rain

Teli and I returned home to check on the situation there.

Around 2AM the electricity went off again. There was a light shining from around the corner of my building so I knew that they were working. Just then there was a big explosion.

Within about 5 minutes the electricity came back on. We went to bed and had a good rest of the night sleep.