Teli and I took a Walk-About on Sunday. It has not rained for weeks but this day the skies decided to finally let loose and there was rain. We did not let that stop us. Anyhow, we were already out walking and there was no shelter as we crossed the floating bridge so what could we do? We got wet.

My big plan was to go to the other side of the Rio Ozama and go to the yellow and black lighthouse on the point. We never made it there. The plan changed.

Teli hates to go where she does not know and she hates to go up on Calle las Damas. She loves the part where the nuns’ houses are. We go there almost everyday. If we have head the opposite direction and go toward Plaza España she jumps and tries to tell me not to go this way. This day she did not get her way. She had her way the day before; this day was my turn to choose the route. I got my way and we went on our walk to parts unknown.

We went down the stairs at the end of Calle el Conde and to the main road that heads into the city, Avenida George Washington, better known at The Malecon. 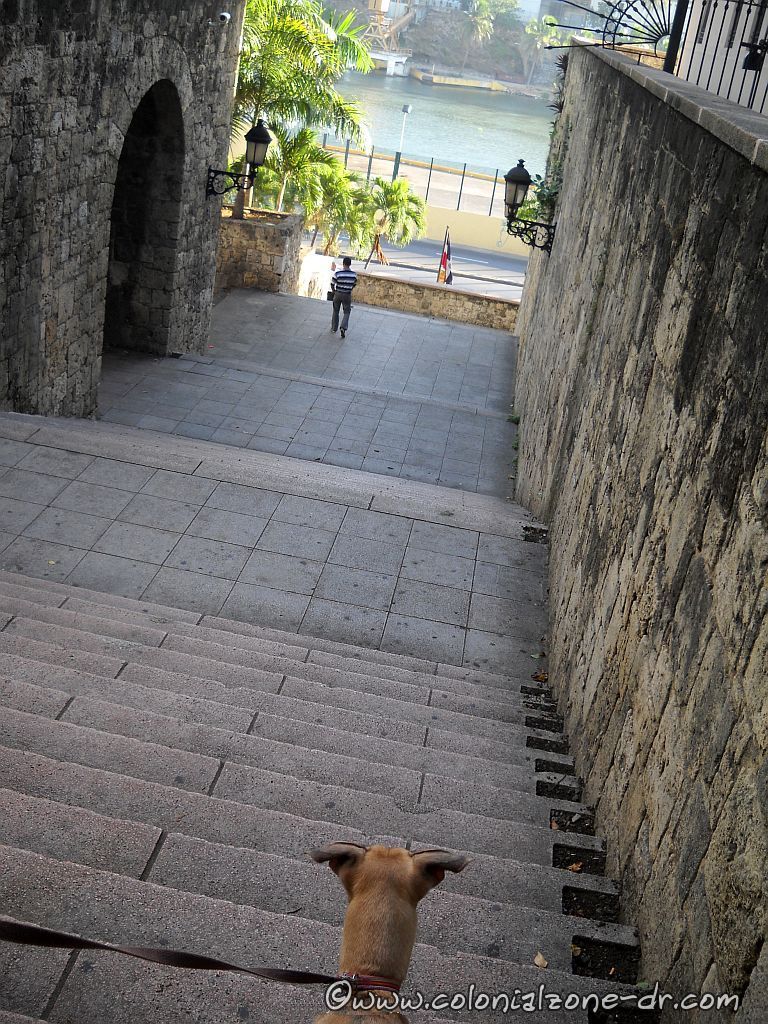 Stairs at the end of Calle El Conde

Since is was Sunday there was very little traffic so it was fairly easy crossing the normally congested street to the Don Diego Terminal. 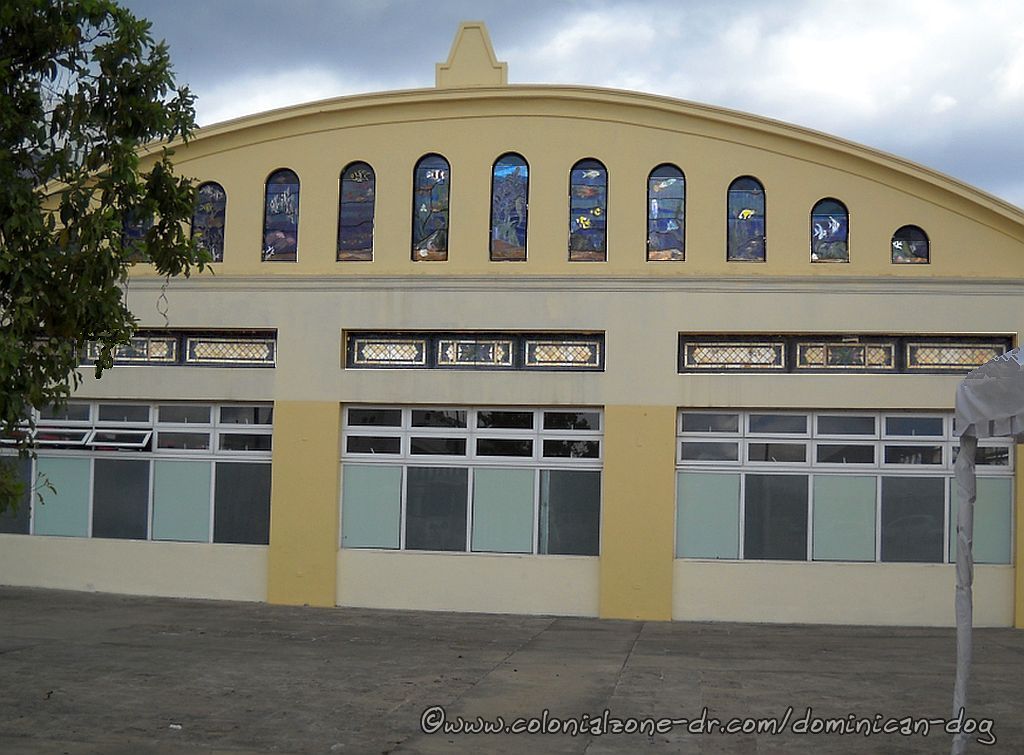 The guards at the terminal there were all smiles when they saw Teli. They were asking if she was a Galgo (Greyhound). People always want to give her a breed or race as they cannot understand why I walk around with a Viralata (which is the slang name of the mixed breed dogs here in Dominican Republic because they “live out of the can”) also known as a Khaki (because of the color). I love to tell people that she was a dog from the street but now she is a dog from my bed. That always shocks ‘em knowing that a DOG sleeps in MY bed with ME. After the initial shock it always brings a good laugh. 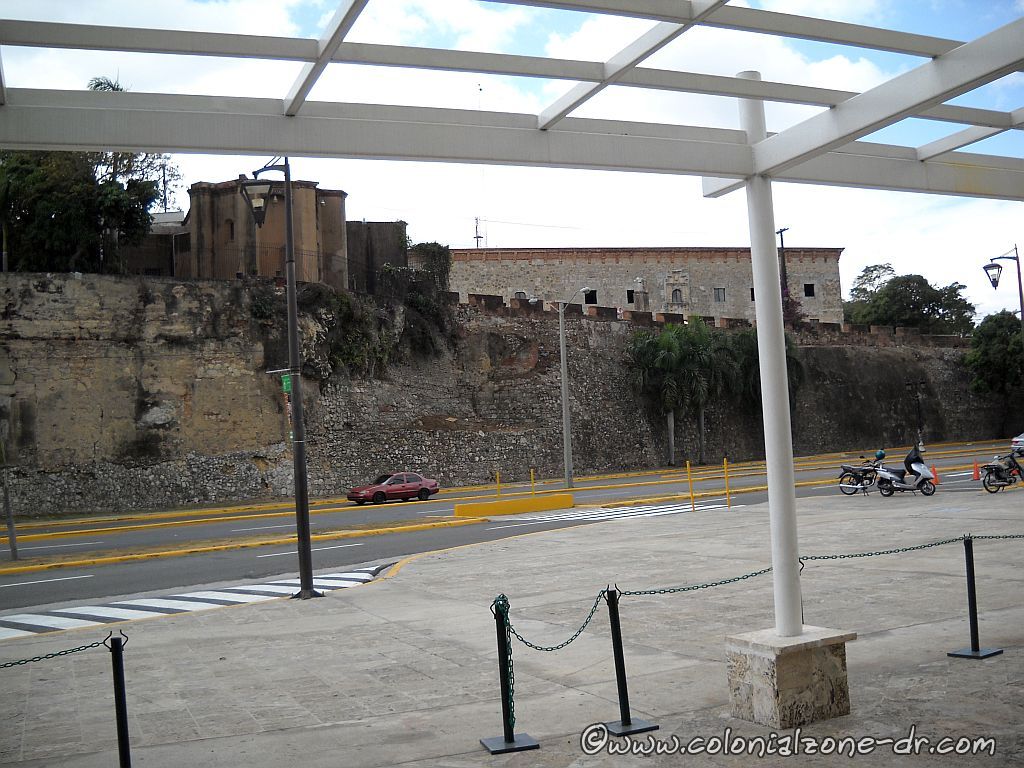 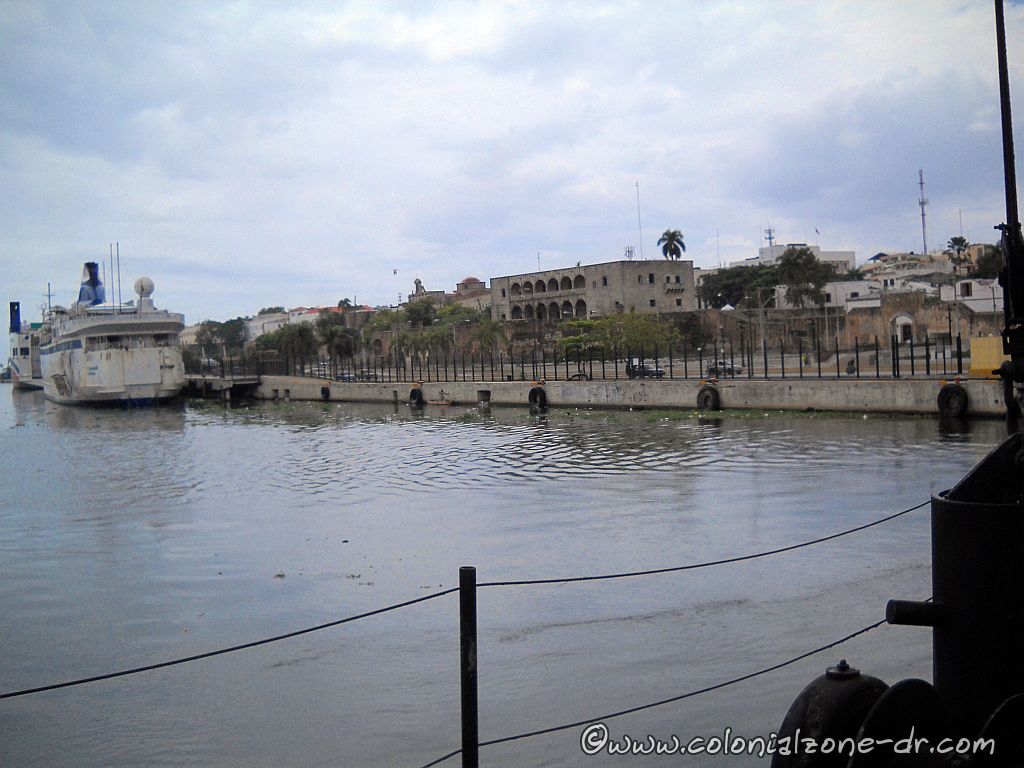 Back to the Walk-About… We walked to the Puente Flotante (Floating Bridge) and Teli went across it, no problem. I was so proud of her. She even was looking over the edge at the water. 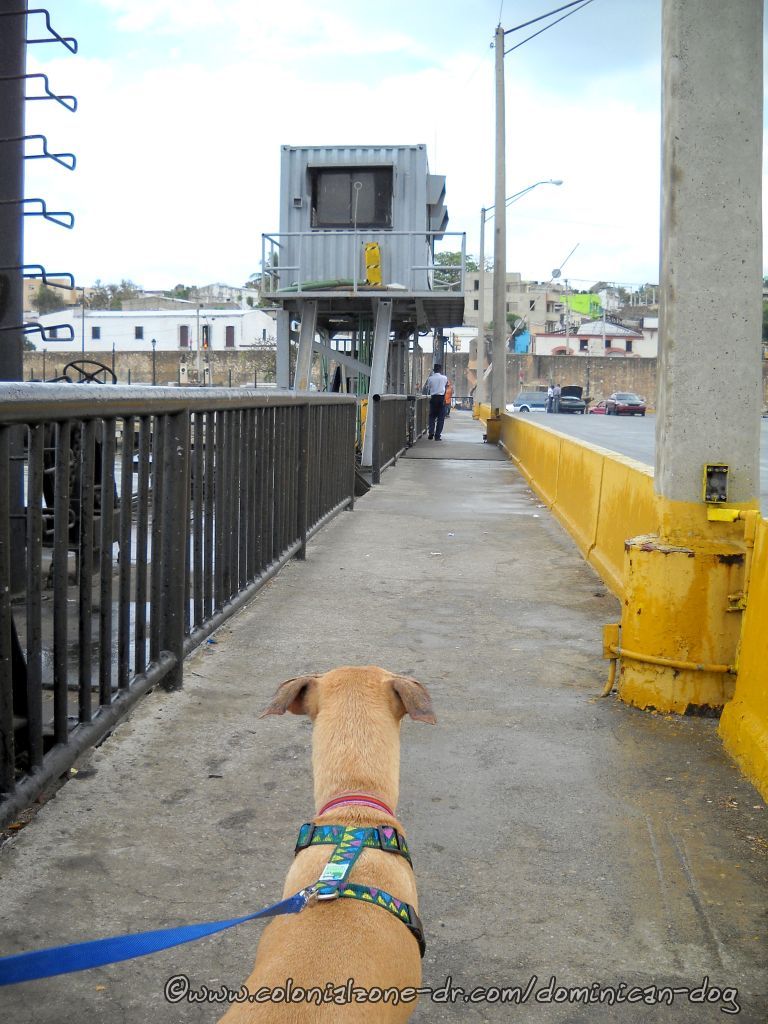 Teli on the floating bridge 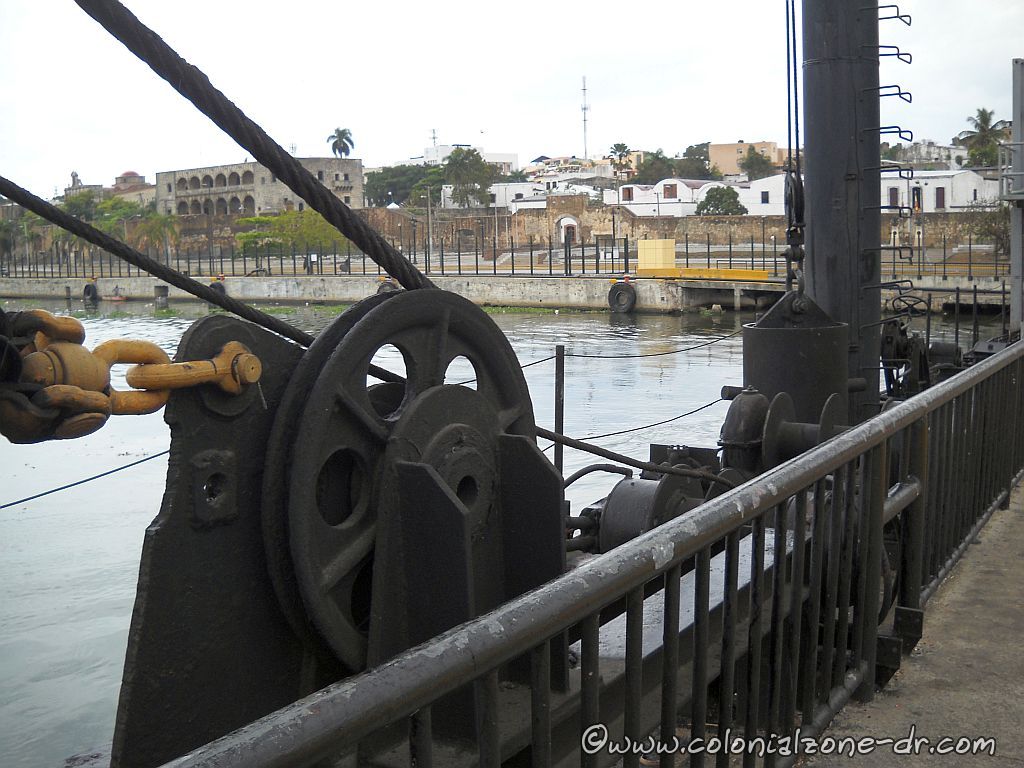 On the other side of the bridge there are men selling the fresh catches they just made. They held up the fish they caught from Rio Ozama for me to take a picture. 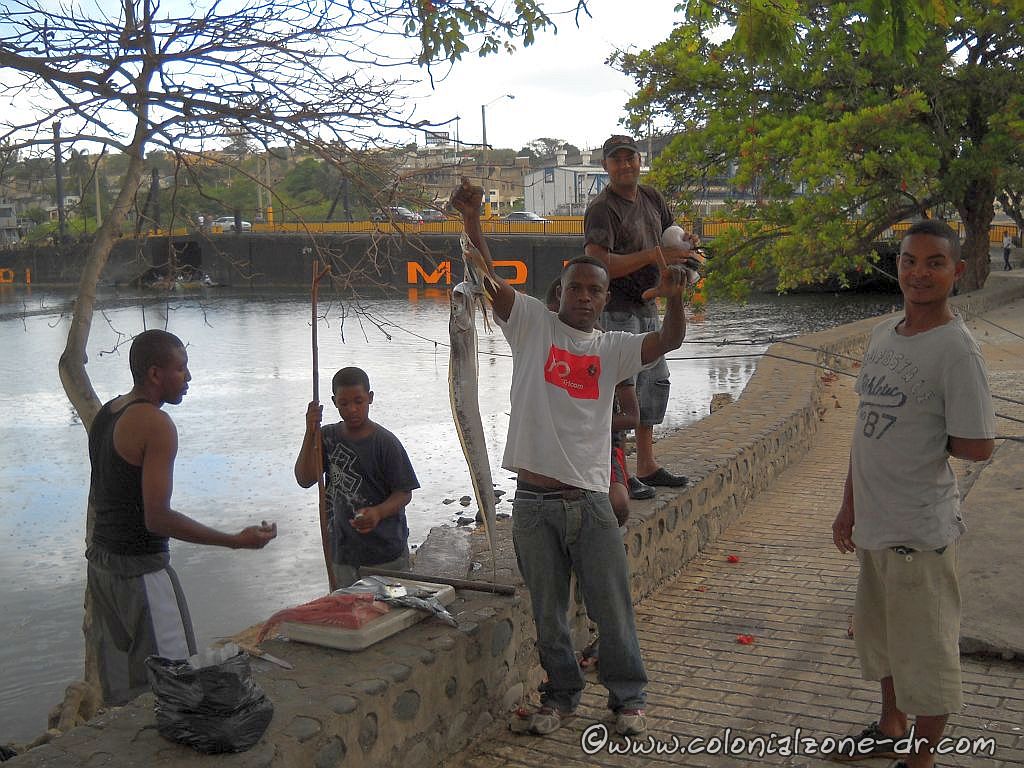 Then two boys followed us talking about Teli. They, of course, wanted some money. I gave them a few pesos and they continued walking with us talking until the Gas Station.

I wasn’t really sure where to go as I haven’t walked that way for so many years so I just kept going until I saw the sign for the San Souci Port.

There was a small shaded park in front of the road to enter the port. The park could have been really nice and inviting but, sorry to say, was in really bad shape. This is not a good representation of the country considering this is where people who come to visit us via the sea see when they leave the confines of the terminal. My opinion, this park should be nice and clean as it is the first park many visitors catch a glimpse of. It should be inviting for people just wanting to walk or sit for a bit in the shade. I tried to make the pictures I took look good but really the park needs some serious attention. 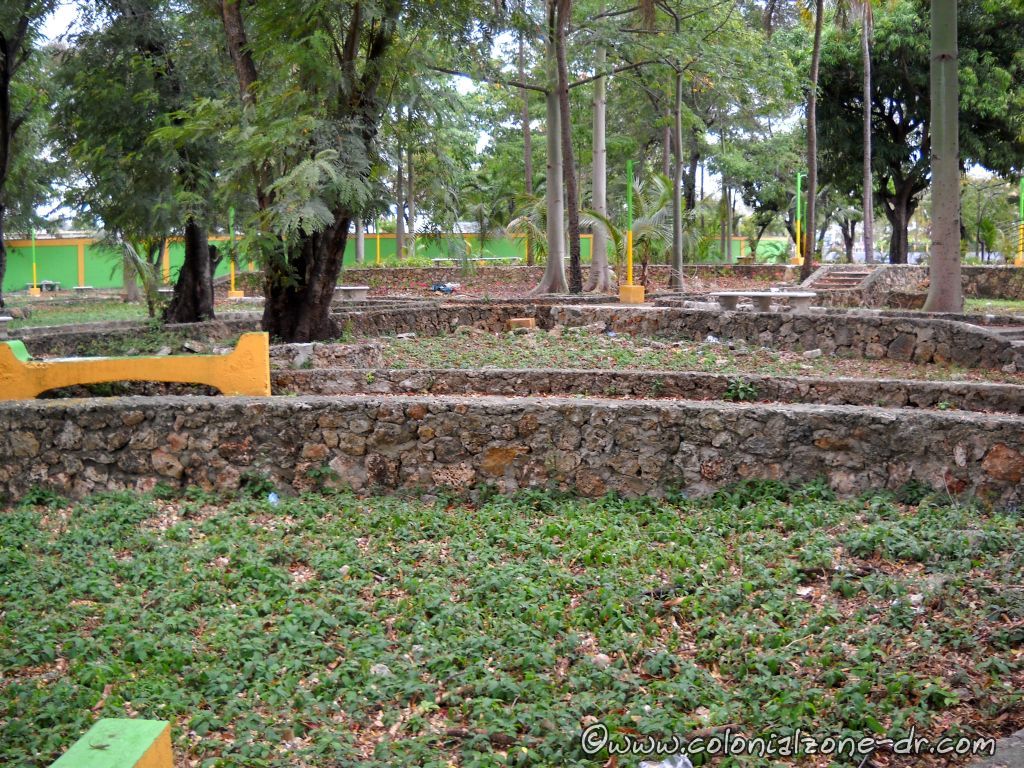 Park at the entrance to Port San Souci 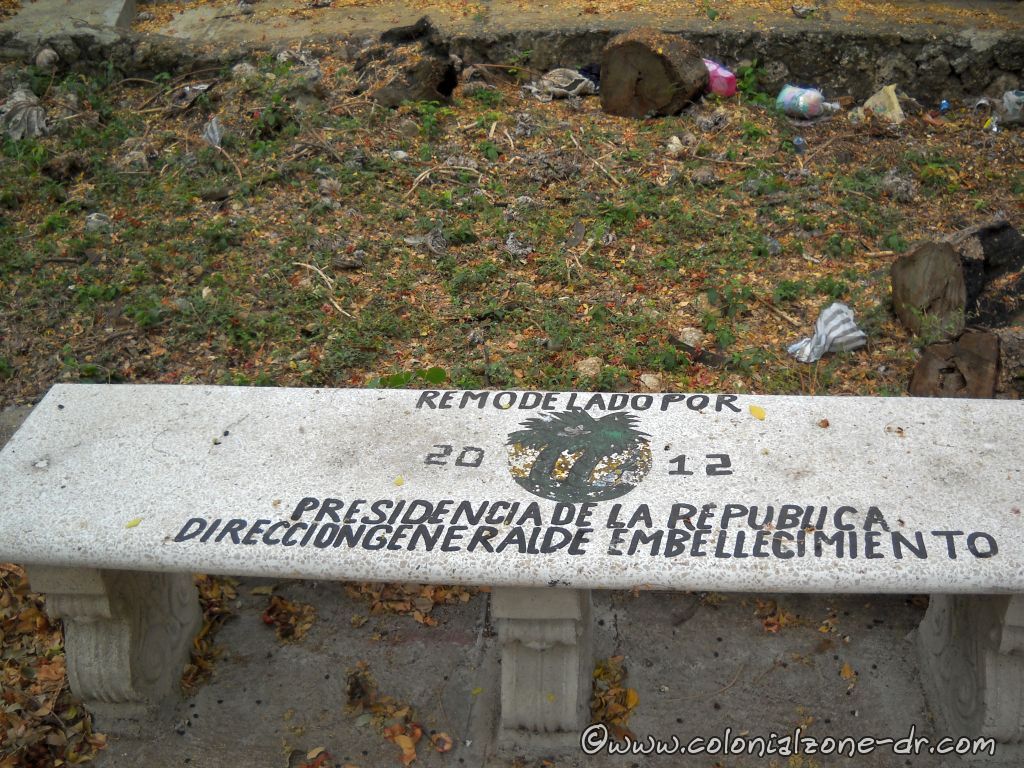 Bench in park as entrance to Port San Souci

We walked down to the Port San Souci then turned around and headed back toward home. 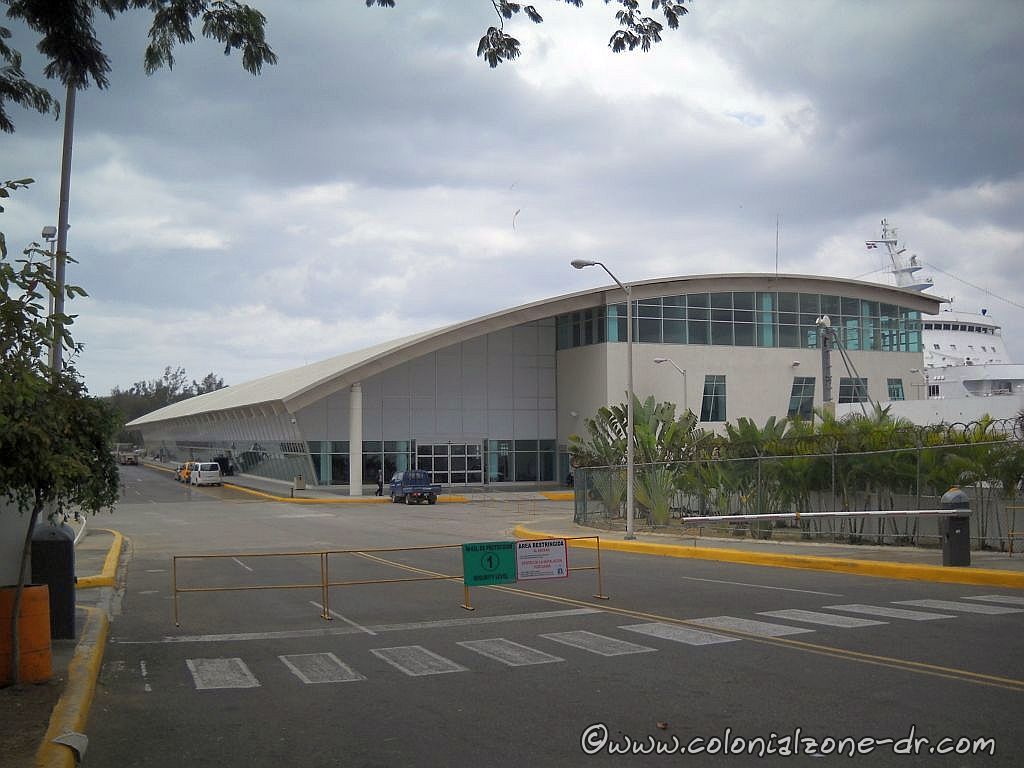 We were wet and my shoes were a little sloshy. I wanted to cross the highway to the other side of the road but there were too many cars for Teli and I to cross safely so we just headed back the way we came.

When we passed the Marina Bartolome Colon I wanted to enter to take a few pictures but the security stopped us so I just took a few pictures from the entrance. 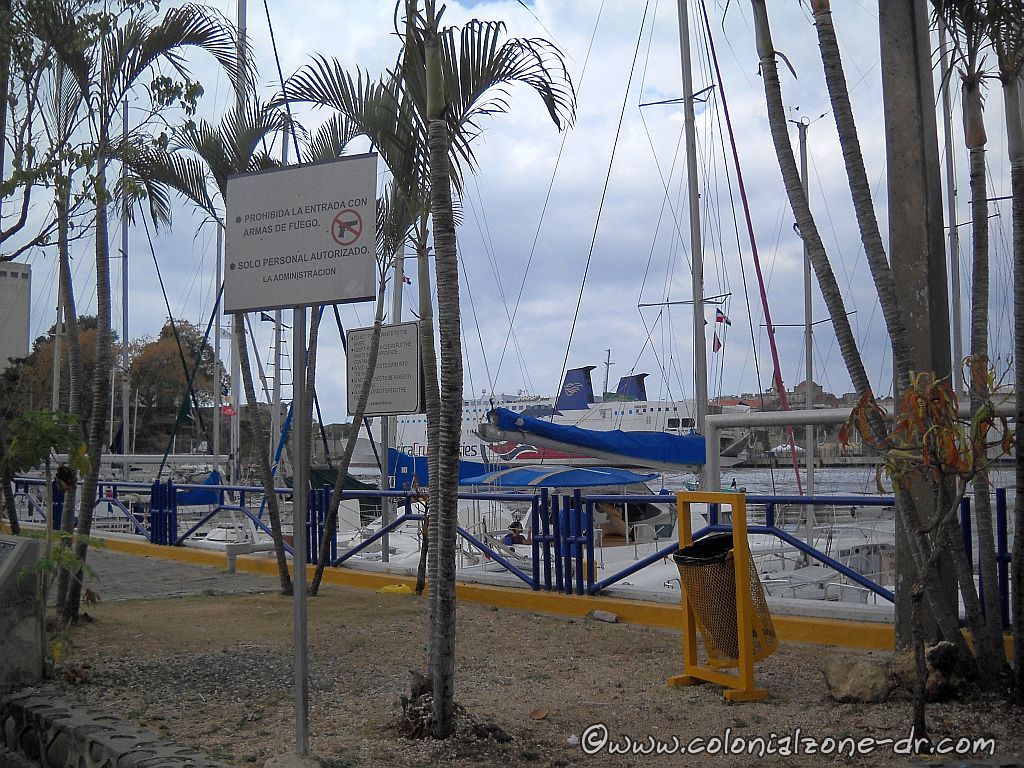 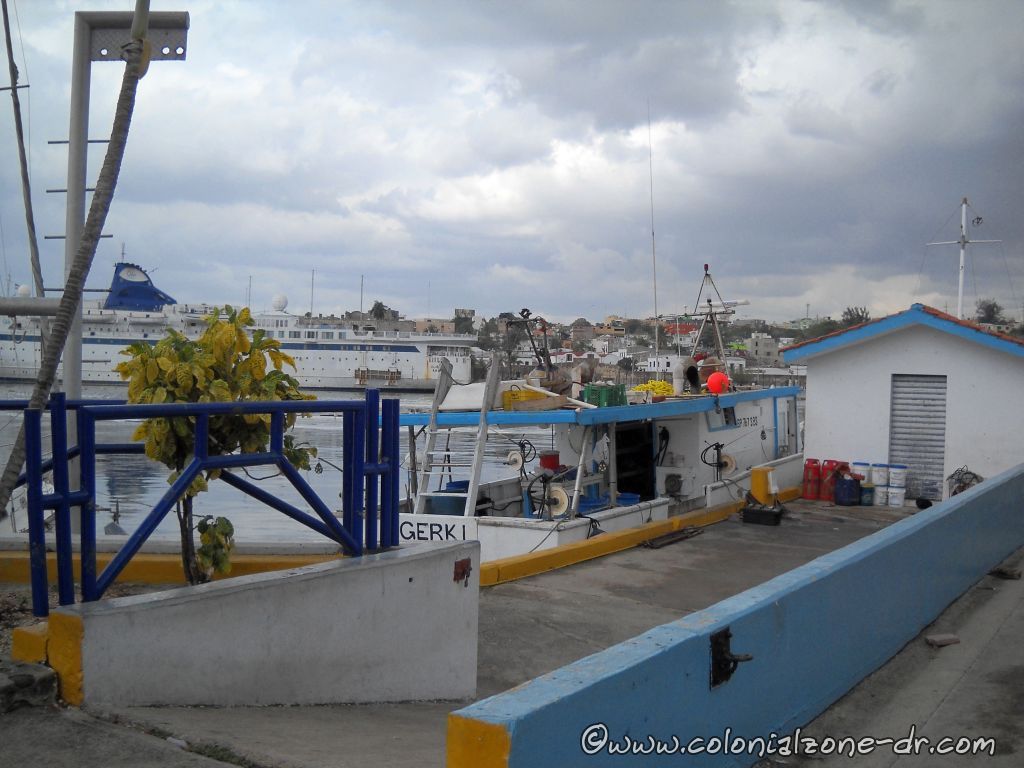 After we talked a little bit they said we could go in and take pictures but it was starting to drizzle again and I just wanted to head toward home.

As we were walking a Taxi I know passed the opposite direction. Did he yell hi to me? Noooo. He yelled out the window to Teli. Same with another car that passed. The people inside did not yell out to say hi to me. They yelled Telis’ name. The famous Dominican Dog lol.

We crossed the floating bridge again. We were back on the Colonial Zone side of the road finally. We entered at the Puerta de las Atrazanas into the old ship yards and headed to the shelter of the Navel Museum (which is still closed for remodeling). 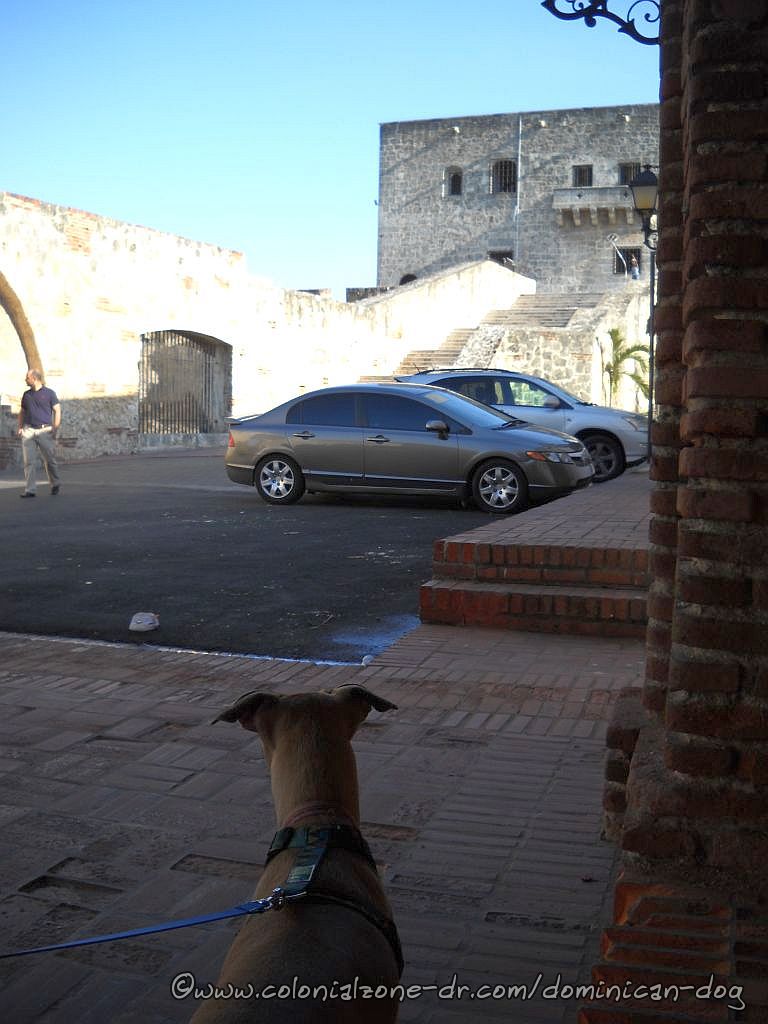 Shelter at the Naval Museum

I talked to a friend there for a few minutes while the rain stopped and we headed on our way. Completely wet by this time. 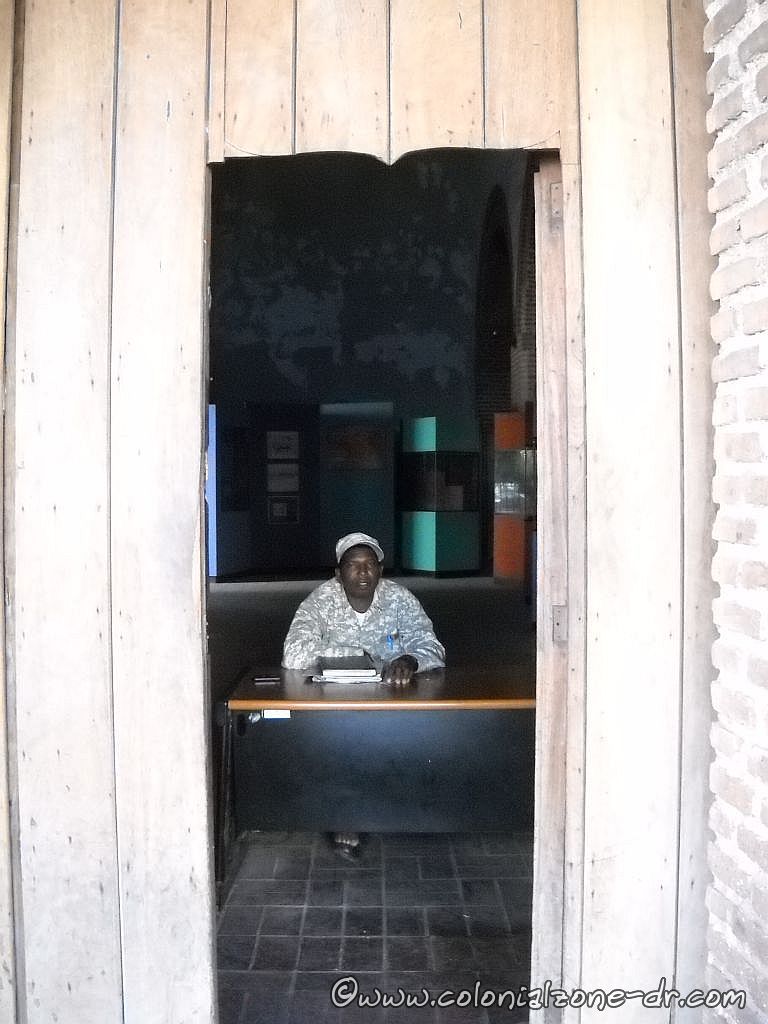 Entrance to the Naval Museum

As we made it around the corner onto Calle General Cabral it started drizzling again. 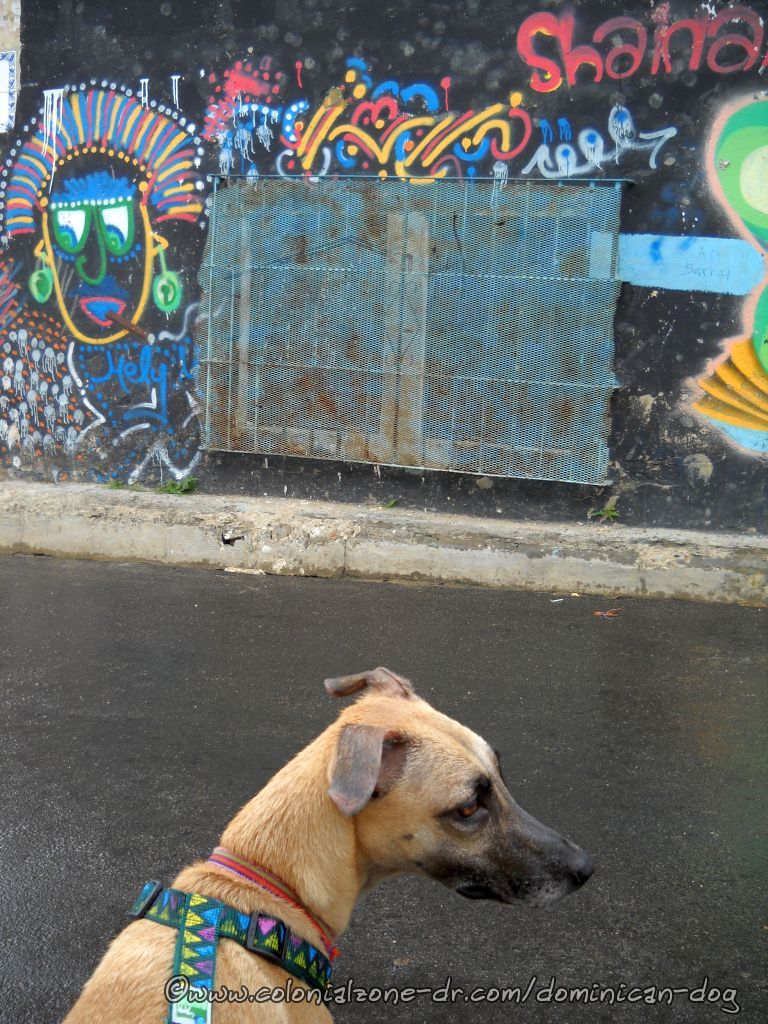 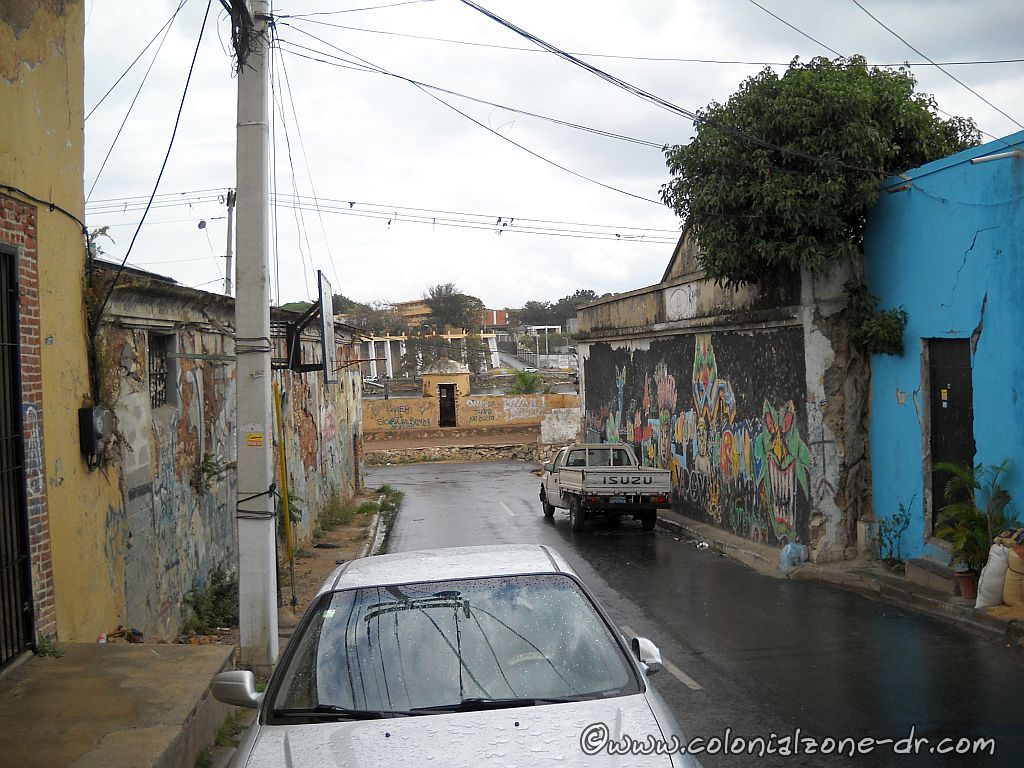 We headed to the nearest Colmado to have a drink, talk to my good friend Chino and wait for the rain to stop.

After the rain stopped and we were finished talking to Chino Teli and I headed down Calle Isabel la Catolica. There was a group of College students with cameras making a film in front of the Juan Pablo Duarte Museum. I had to stop and see what was going on. The students were making a film about Duarte, one of the founding fathers of Dominican Republic, answering the question “What if Duarte was returned to his country today?”. 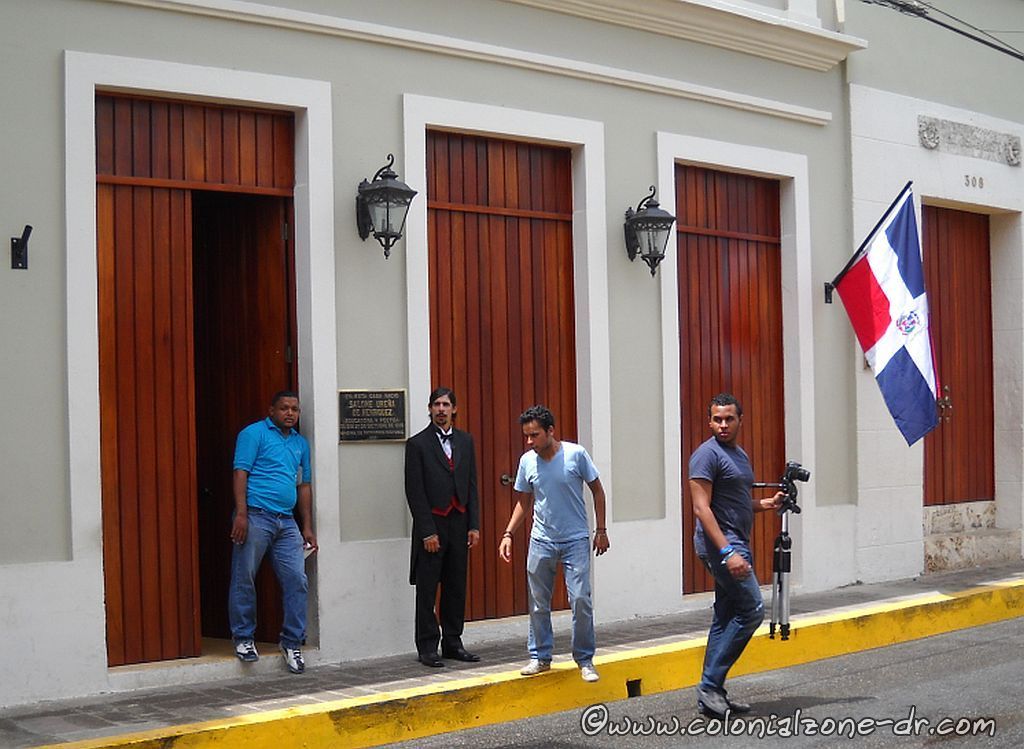 Filming at the Duarte Museum

Teli was determined to head towards home even when we saw a giant kitty cat in front of the Centro Dominico-Aleman at the Anime Japon Festival. The girl wanted a picture with Teli and Teli just wanted to keep walking. 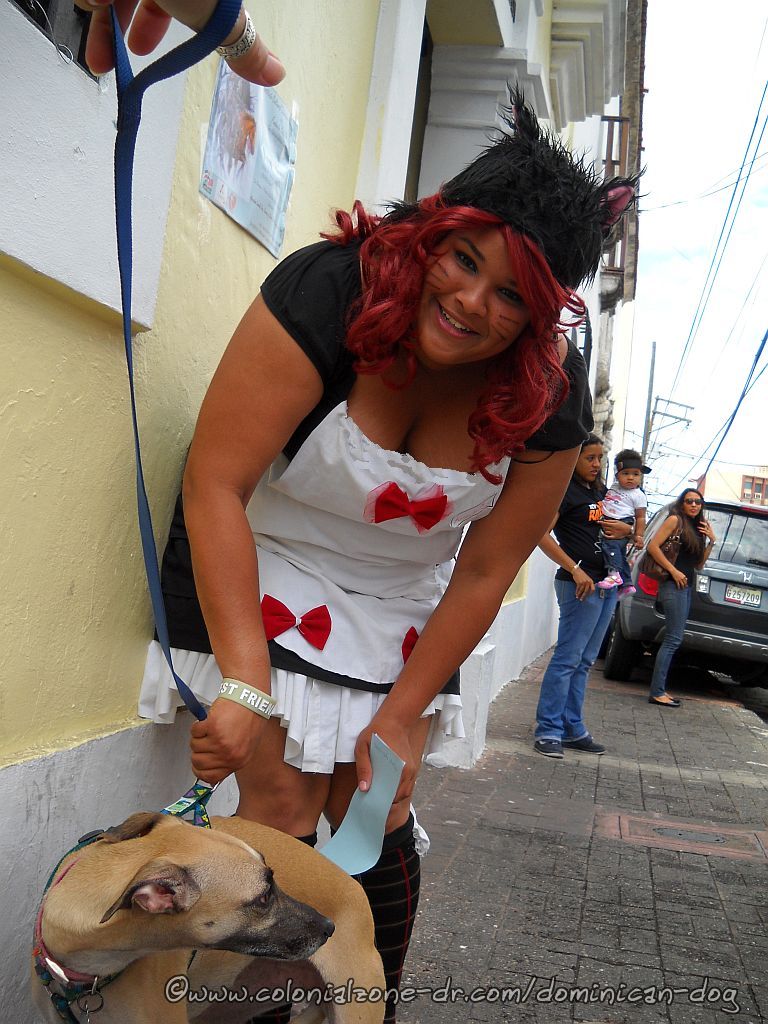 Teli and the Anime Cat at the German Dominican Center

The interesting thing was, when we got to the corner where we live Teli kept walking. She went directly past our apartment. She headed to “HER” Colmado, Colmado Omar I. There she went directly to HER corner and she was home. She was content. She was safe. 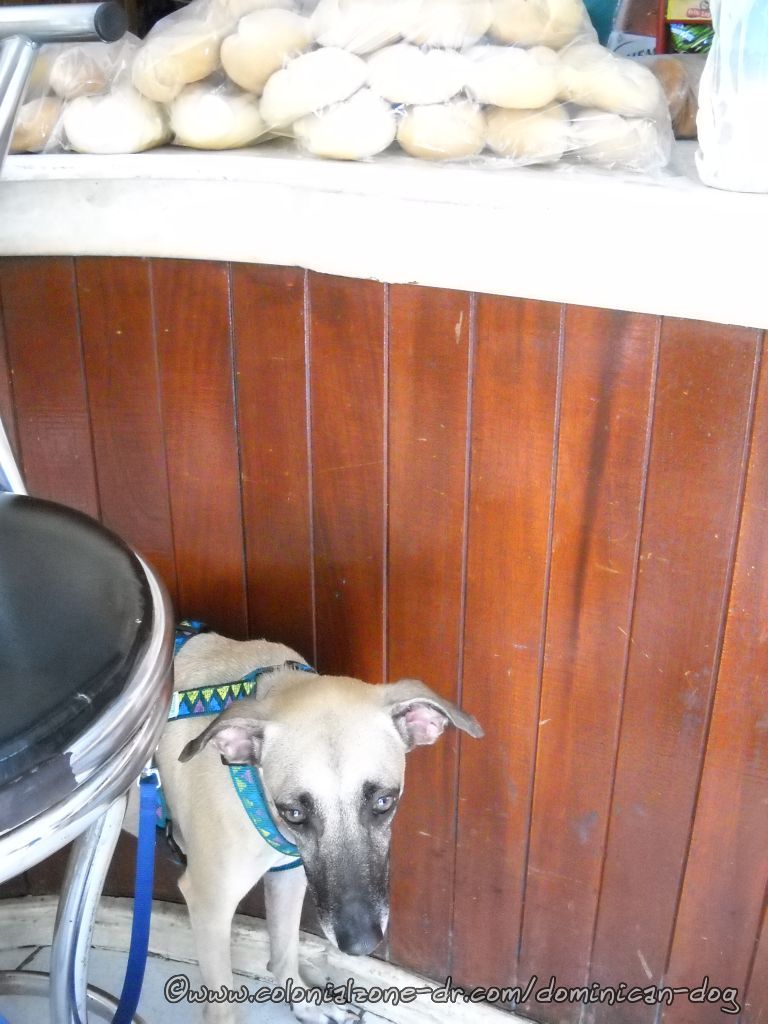 Teli in her corner Colmado

At the Colmado Teli got some water, I got some beer. Someone bought Teli a little bit of salami. After this she was fine to head home where we could dry off and relax. 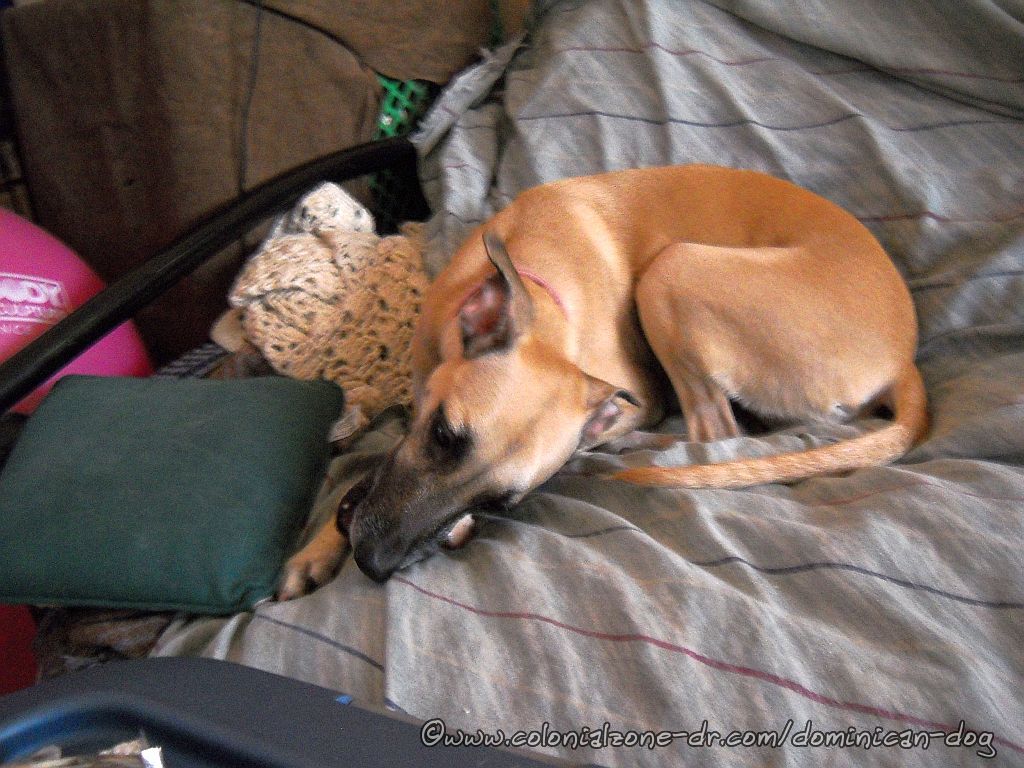 Teli home with her bone on the sofa

Here is a little map of our walk-about. 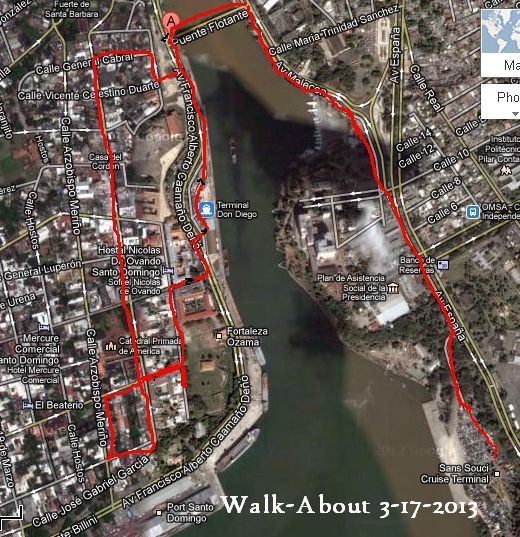