Aug. 24, 2012 We all got ready for the Tropical Storm Isaac. Got supplies, candles and batteries. Made sure the water storage stuff was filled and the plastic and tarps were ready. All was ready to go for a big one.

Thank goodness the big one did not happen. We were spared again here in Dominican Republic. We got some rain in Santo Domingo. We got some wind. Nothing out of the ordinary. It will still be bad for many people because of rain, wind, mud slides and the angry sea.

Yes, the sea is rough my friend here on the Malecon in the Colonial Zone area. I might walk down later a little closer to the Malecon to get some better pics all depends on how much I feel like fighting the wind.

Teli, my dog, did not really enjoy her morning outing. She was jumping at every little thing banging and there were lots of little things banging around.

I went to the roof and took some pics and a video. So here they are. Some pics are from yesterday and now today. You can see the difference in the sky and the angry sea. 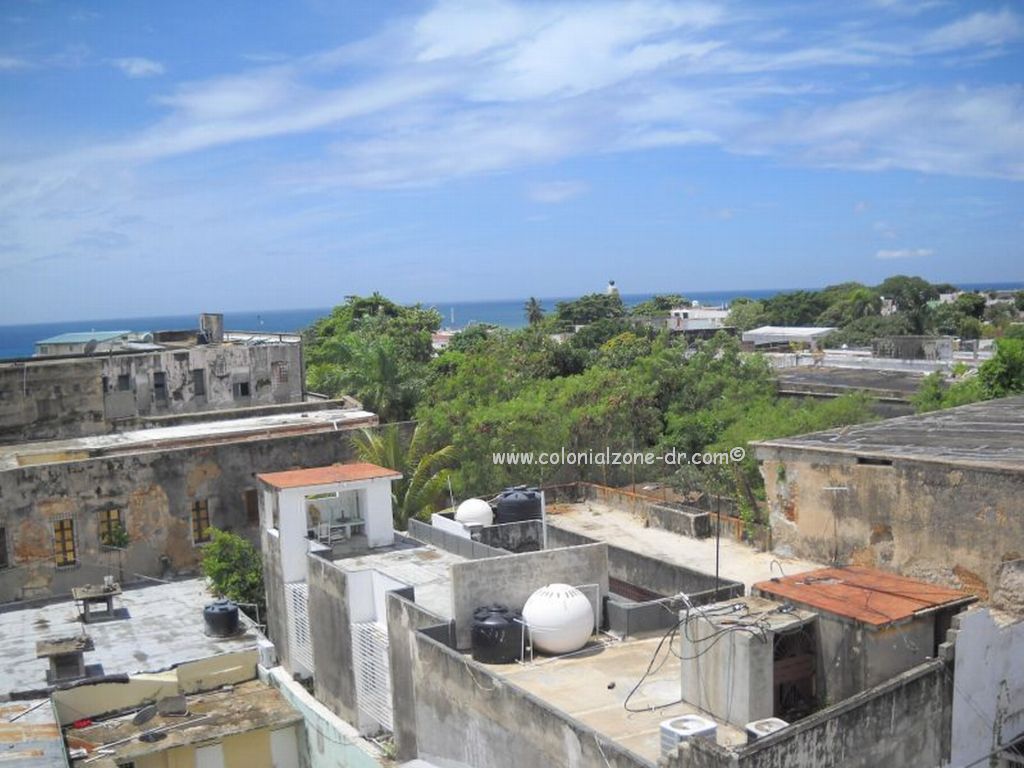 The picture above and below are almost the same views. You can see the difference 1 day makes. 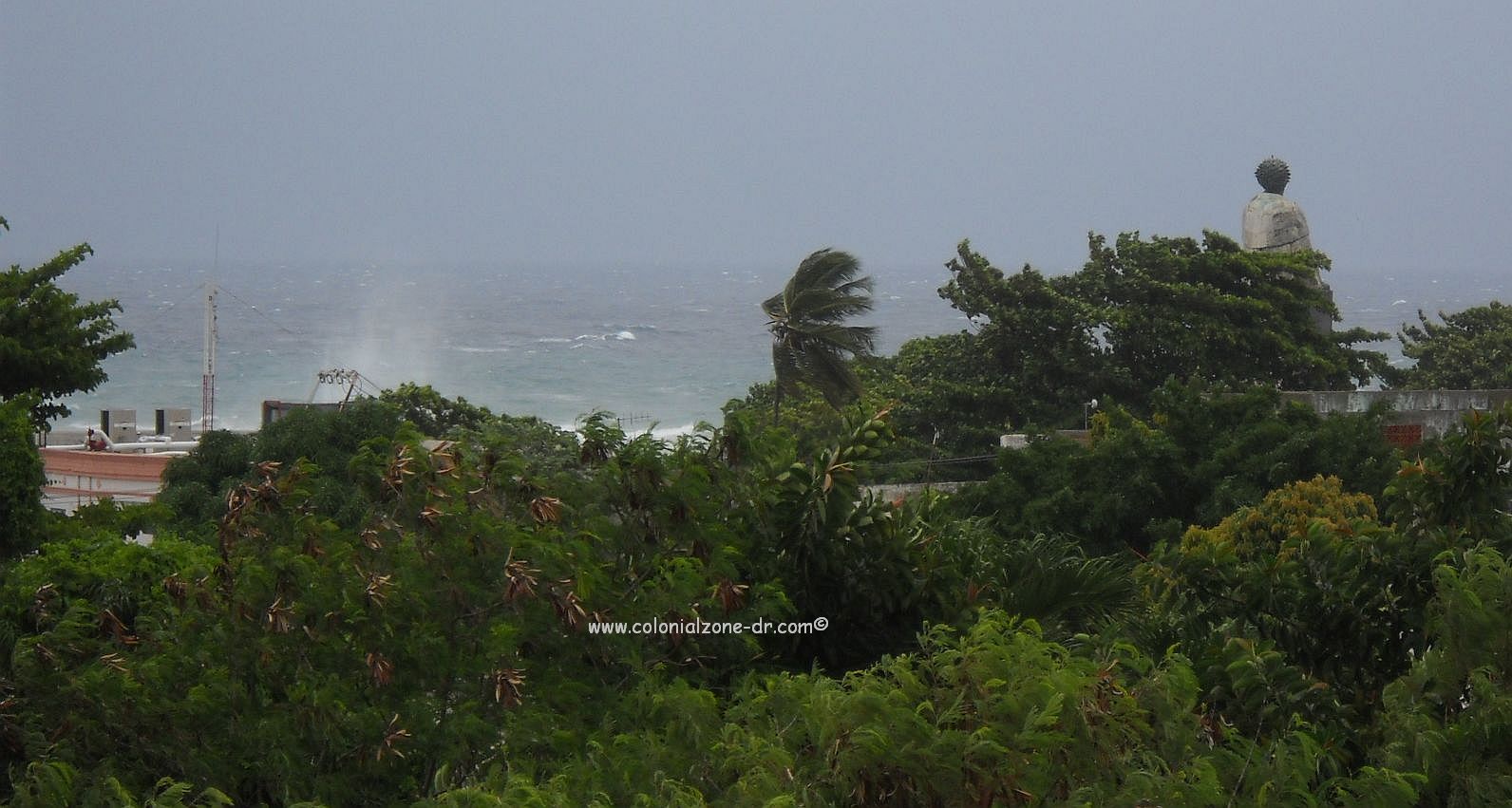 Aug. 25, 2012 We passed the night here in the Colonial Zone area with out many problems. The electricity was on and off, mostly off. The night was hot and sticky without a fan and could not open the windows. I’m hoping that maybe I sweated off a few pounds. Yea, right.

My poor baby Teli was not really pleased with the entire thing. Shes still afraid of lots of things and wind and rain are some of the many on the list. She pretty much was at my side at all times. That was fine with me.

Something exploded in Parque Colon, probably a transformer which happens often in this country. A tree branch went down on the road at the corner of Isabel la Catolica and Jose Gabriel Garcia but the neighbors cleared it off the road as soon as it happened. It is laying at the park entrance.

I had my computer covered with plastic and the front balcony area also covered with a tarp. I did not want anything getting to my dear old puter. 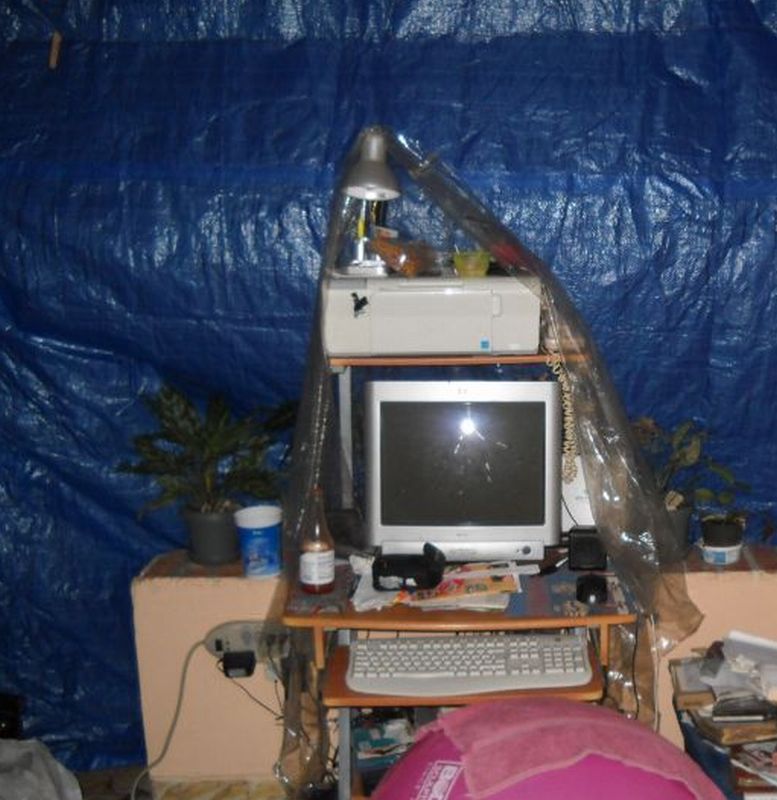 My computer is covered and safe

Here are a few pictures a taxi driver friend, Juan Carlos of JC Taxi Services, sent me this morning. He took these on the Malecon in Santo Domingo. I will try and get some more pictures throughout the day and post them here so keep checking back for updates. 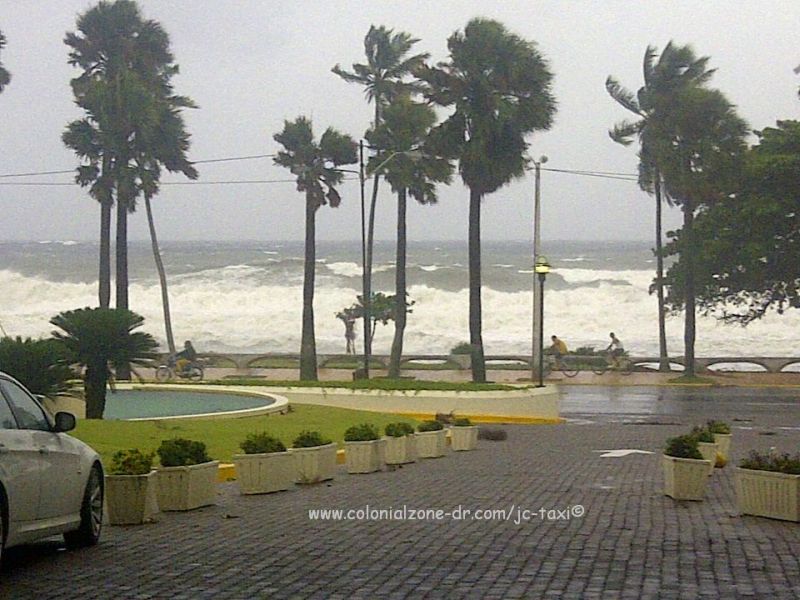 The waves from Hurricane Isaac as seen from Hotel Jaragua, Santo Domingo 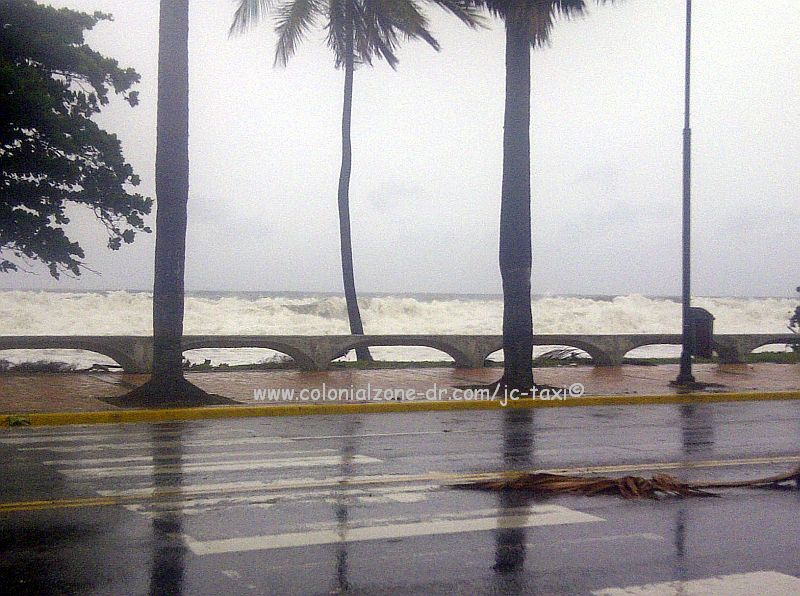 The waves from Hurricane Isaac on the Malecon is Santo Domingo

Many areas of the country have problems. Houses gone, people cannot return to their homes because of high water, trees down, roads damaged. I will keep you posted.

Aug. 26, 2012 Teli, the Dominican Dog, and I went out for a walk-about to see what we could see after waiting and waiting for the rain to stop we finally decided we would just get wet. I was checking out the window and one of the guys in the street had a new type of umbrella. He has a piece of foam stuck on the top..interesting.. 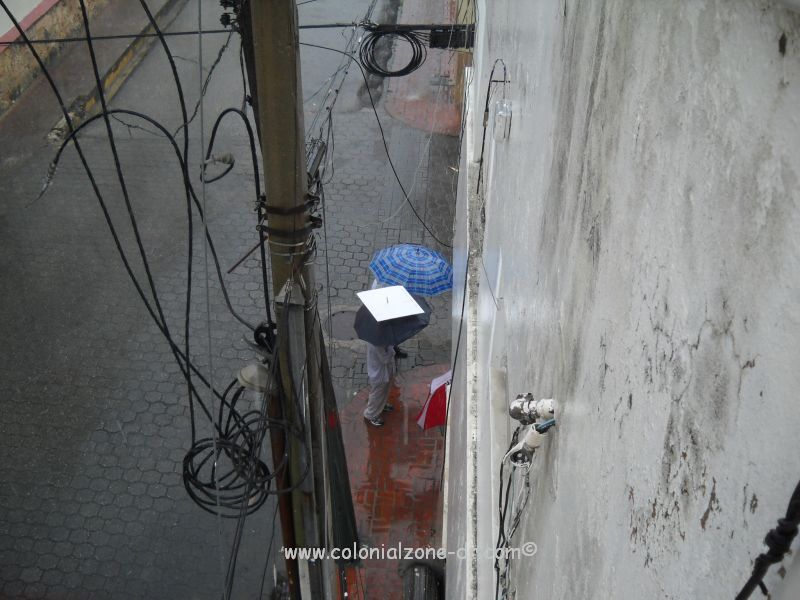 The electricity was good early in the AM. I got to write yesterdays update but soon after the electric went out again. It went out about 10ish, not sure exactly. I got my trusty Kindle out and laid in bed with the flashlight and read with Teli at my side. I had to use the flashlight because I had to have all the windows closed because of the rain. Since the windows are the slat metal type not glass there was no light coming in at all.

By around 2:30PM I figured we might as well just go out. The rain was not going to stop and I was tired of laying and reading with no electric.

I got a cold shower (no hot water when the lights are out and no sun to make it warm either) and Teli and I were off. Here are some pictures we took. Remember here in Colonial Zone it is much different than other parts of Santo Domingo and the entire country. Here we do not have as much flooding and wind damage.

Teli is checking out her park. Some branches down and puddles that she has to walk around but all good so far. 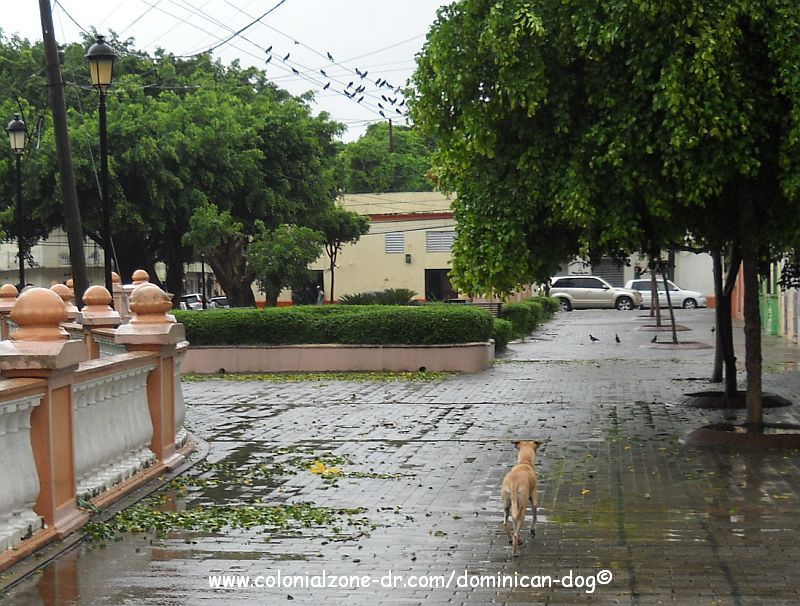 There is a part of the Parque Rosado where water does not drain into the dirt. There must be lots of coral below. So this pool appeared in Telis park. 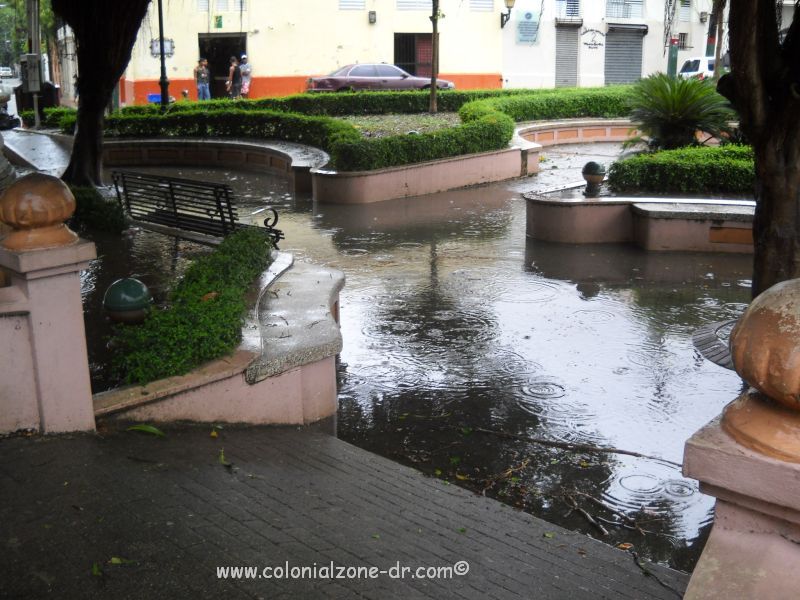 The stairs were covered with branches and puddles looking down toward the Malecon. 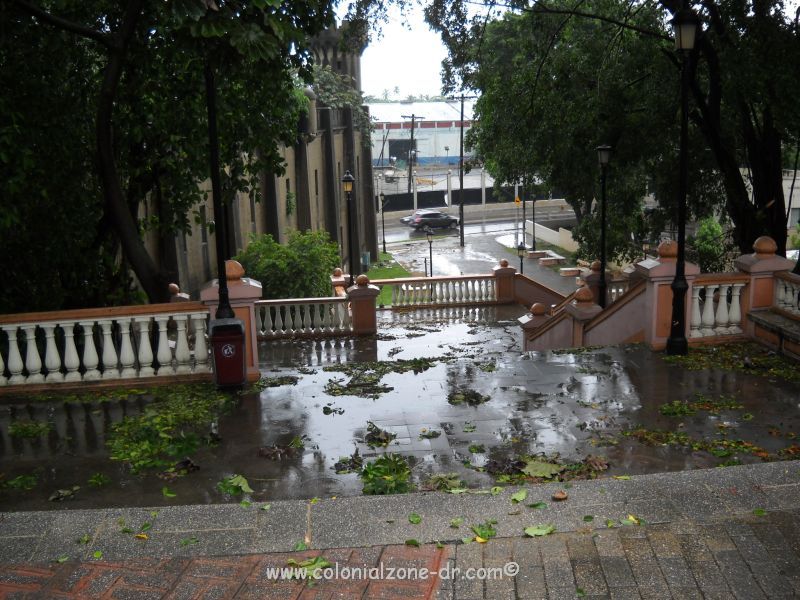 The stairs at the end of Calle las Damas.

This poor tree lost its hold on Mother Earth and went down. I hope it can be saved. I love this tree. 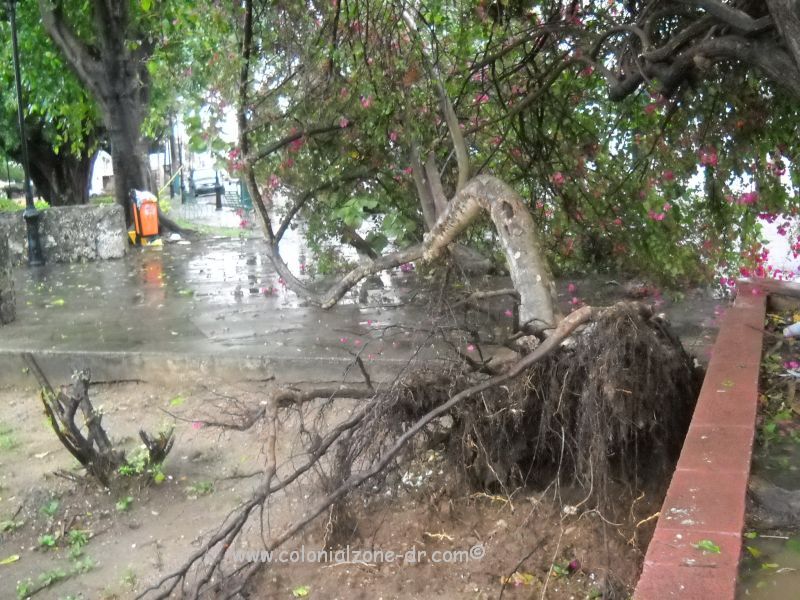 Tree down in Parque San Jose

Someone seemed to have lost their shoe in the Park San Jose. Poor lost shoe. It looks so lonely. 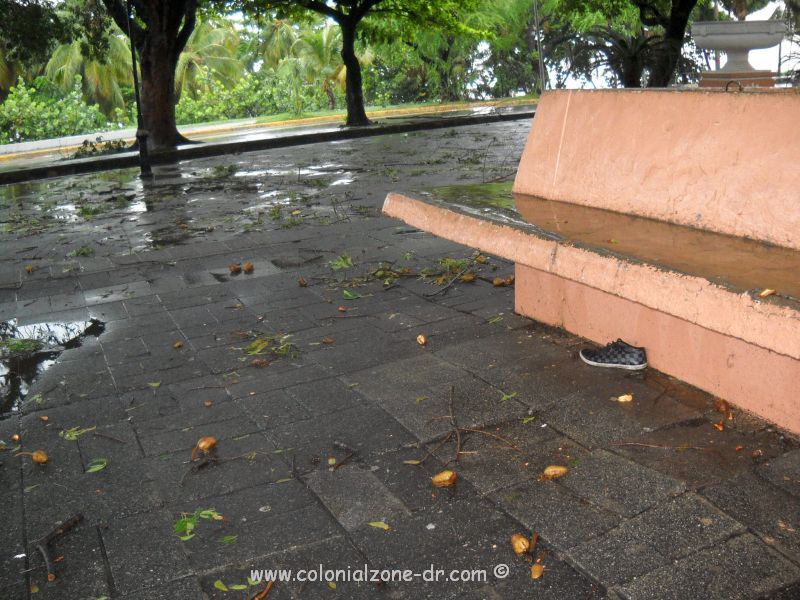 A lonely shoe in the park

The sea was not as rough as the day before. But thus lone 3-legged chair had a good view of the sea at the Parque San Jose and the Malecon at Calle 19 de Marzo. 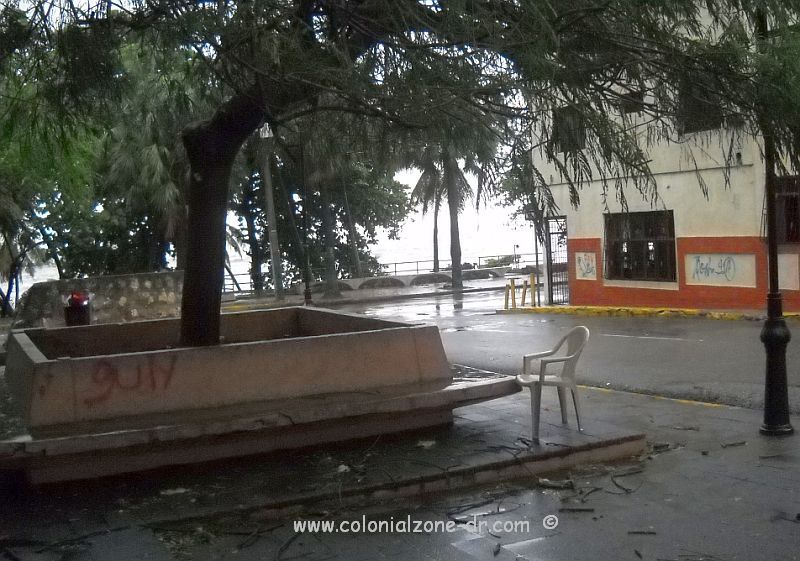 These 2 pictures made me laugh. This man is all alone watching the waves in the Caribbean Sea deep in thought it seems. Until a group of ladies pass by. He must stop to contemplate on them also. 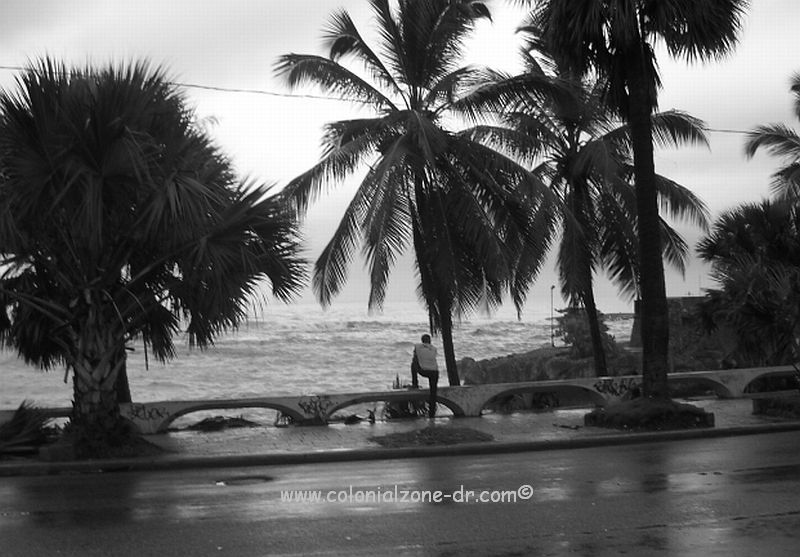 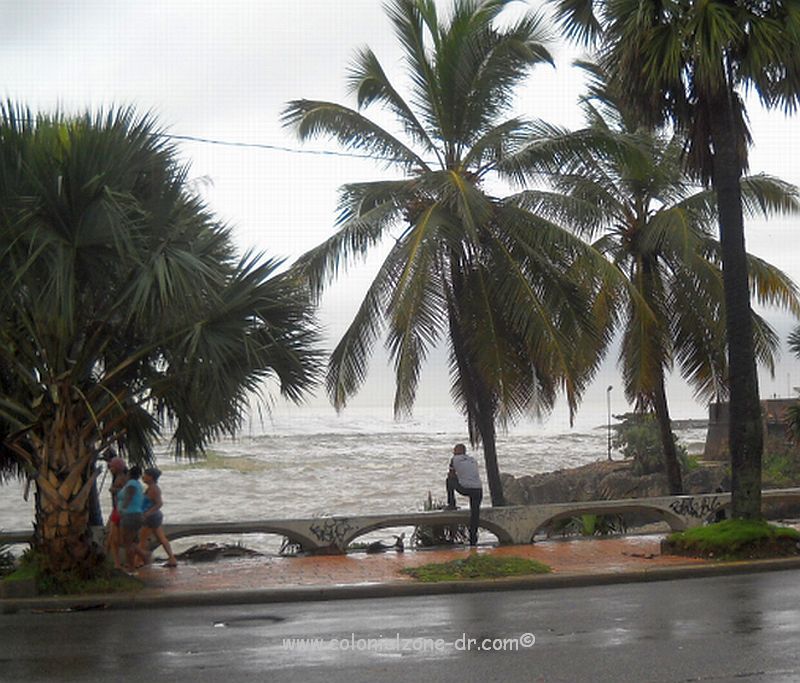 The view up and down the Malecon which is the road that runs along the Caribbean Sea here in Santo Domingo. 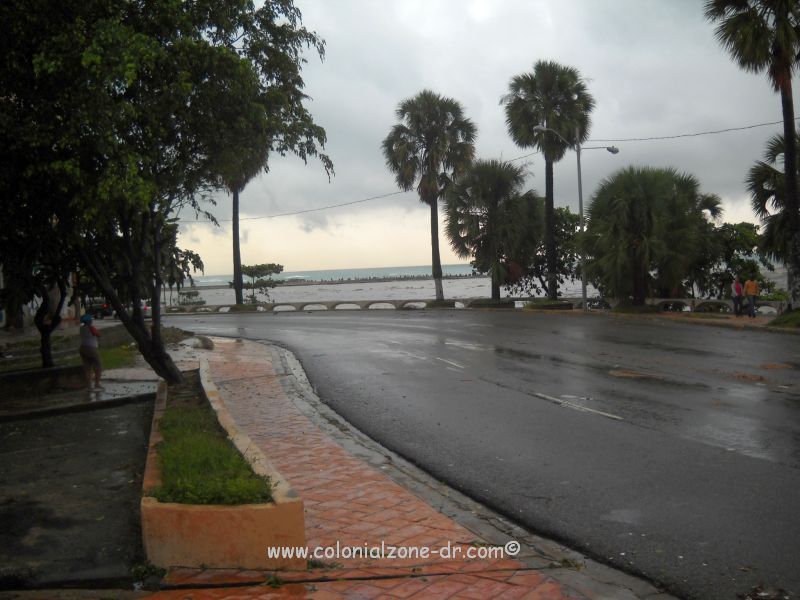 The Malecon and Caribbean Sea in Santo Domingo 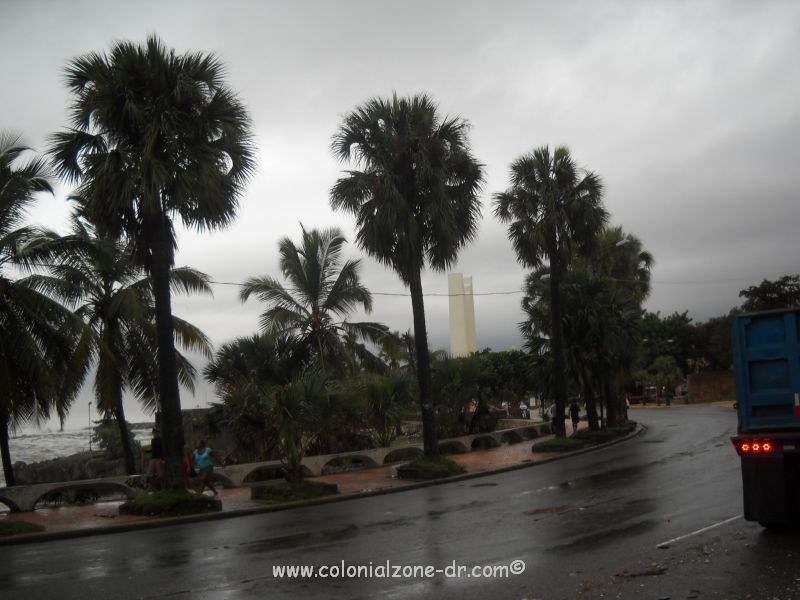 Calle Arz. Nouel being cleansed by the hard rains of Hurricane Isaac. 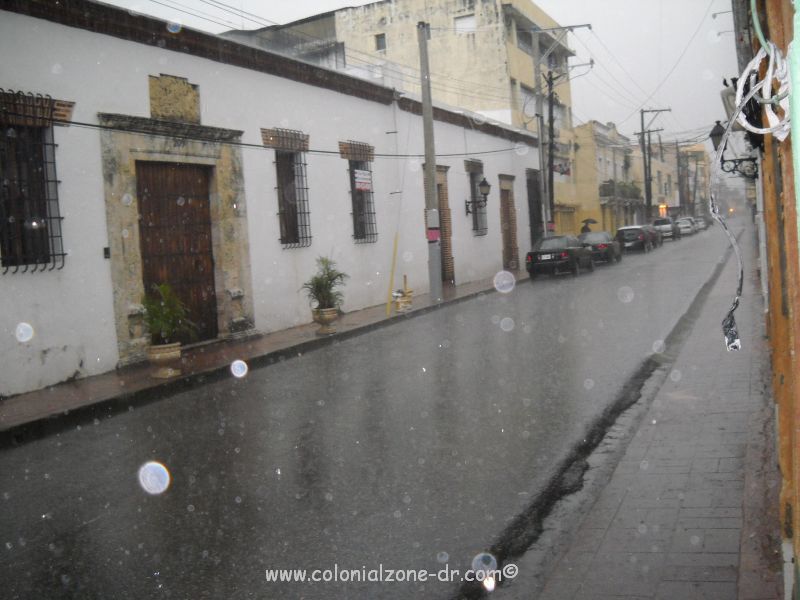 Calle Nouel in Colonial Zone drenched it the rain 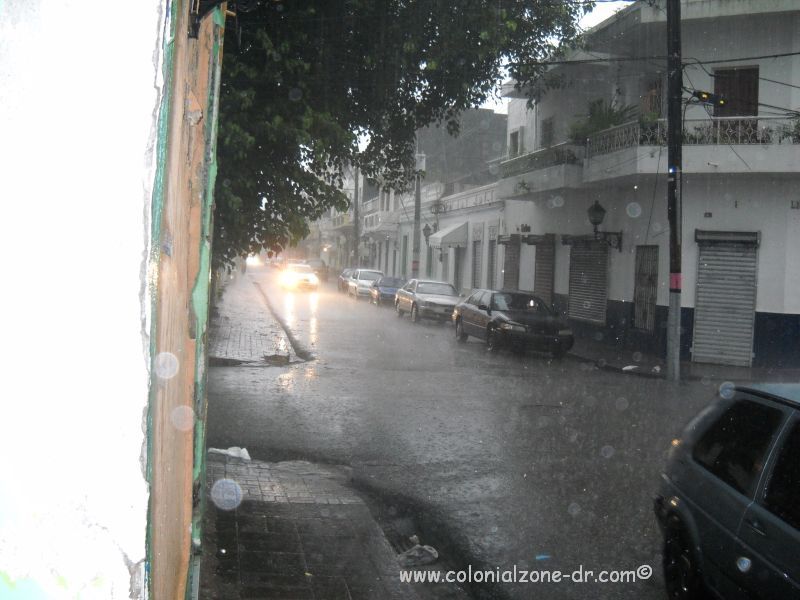 When it rains hard you mush watch for water streaming out of peoples roof pipes. The water comes down hard and fast. I have been caught off guard many times and got soaked in a second not paying attention to this water. 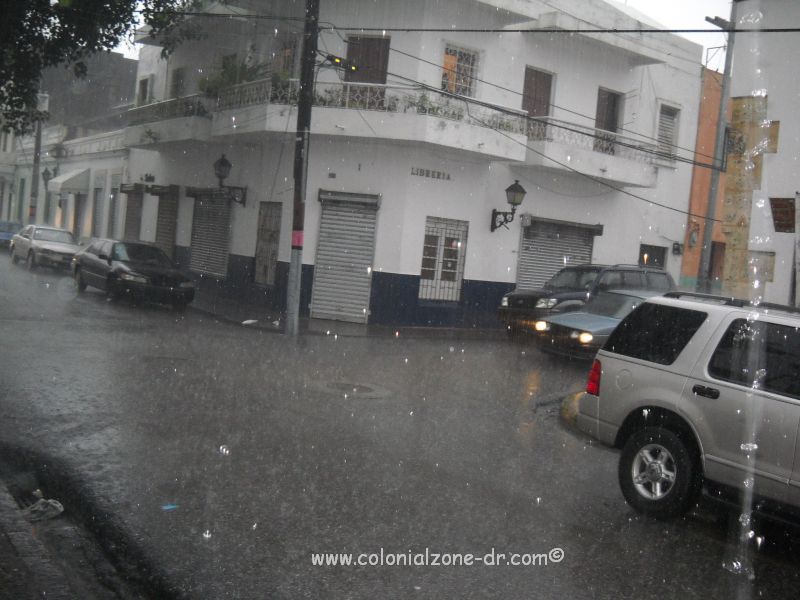 Calle Arz. Portes at Isabel la Catolica always has a drainage problem. A little rain and it fills up fast. We who live in the area always know never to walk that section of street when it rains unless you want to get your little toes wet. 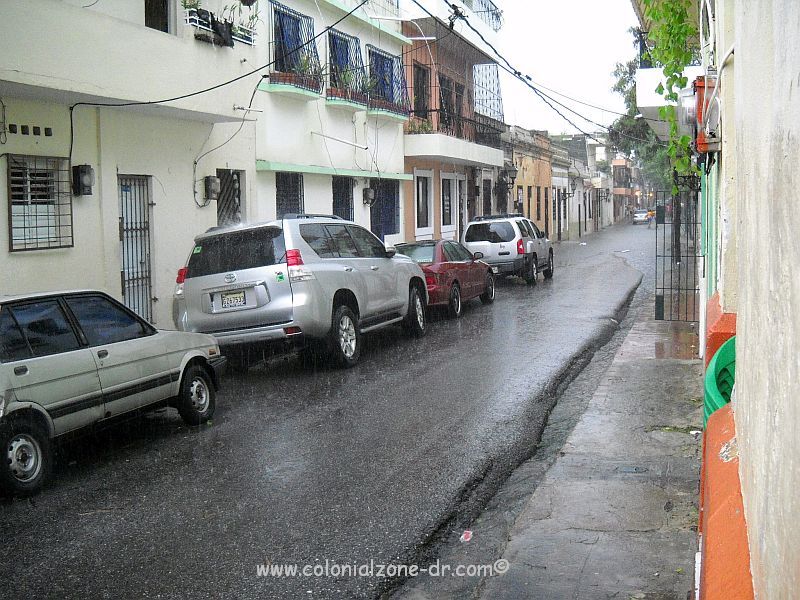 So this is my report for this day. Tomorrow is another and it is still raining off and on. There are roads and bridges collapsed in other parts of the country. People displaced and homes lost. Thank goodness this was not a strong storm.