I have heard of cajuil and knew that they were a funny looking fruit. I saw pictures and tasted the sweet cooked fruit and, of course, I have eaten the so called cashew nuts (really they are seeds) my whole life. I never knew or thought much about where they came from. I just figured that they were like a walnut or chestnut. We would go pick black walnuts and put them in the driveway for the truck to drive over to get rid of the black outer coating. The nuts I knew and grew up with we would put in a bowl with a nutcracker or hammer close by. I did wonder why cashews were never included in the unshelled nut bags. Now I know. (check out the Grown In DR – Cajuil-Cashew page for more information about cajuil) 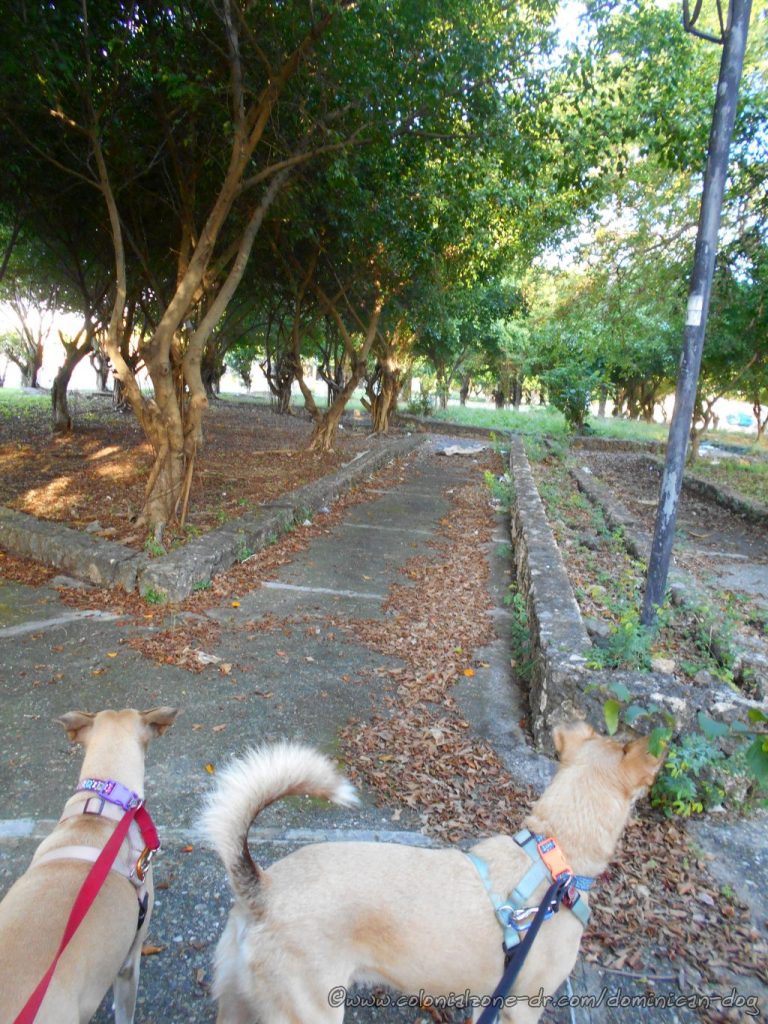 I was walking the dogs, Buenagente and Inteliperra, in the morning like usual. We were heading home from the Faro a Colón. This older man what always says hi to me and the dogs (he calls the dogs “my babies”) was throwing coconut shells into the branches of a tall tree. My nebby inquisitive self had to stop and watch and see what he was doing. 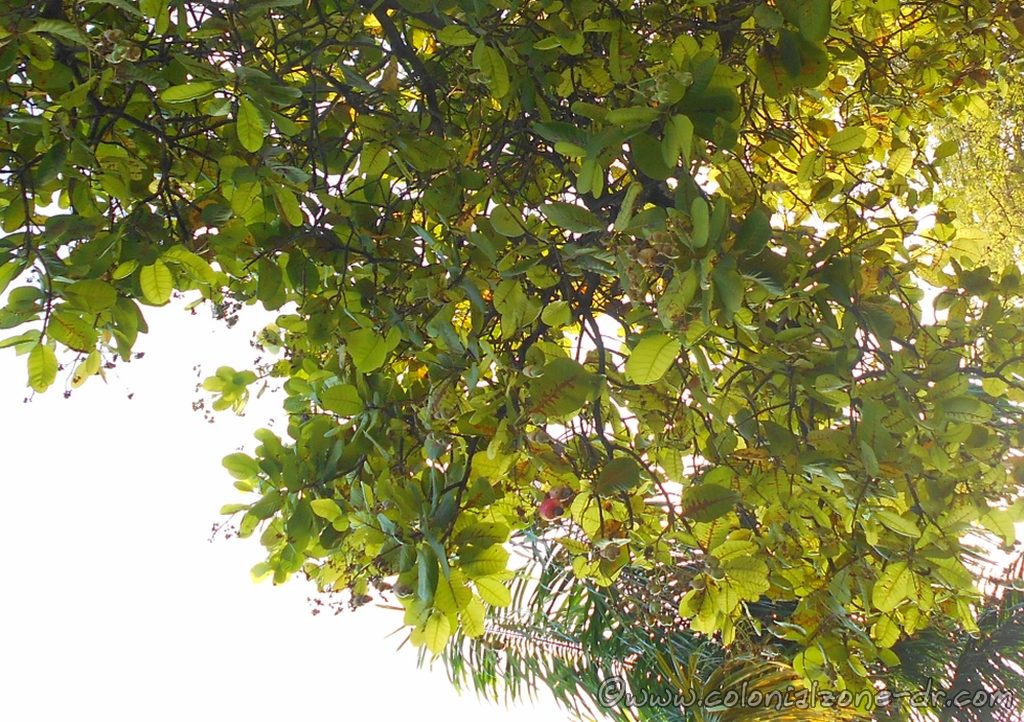 It ended up that he was picking cajuil. I saw pictures of a cajuil but never saw or touched one. So today I got to touch, look and experience this fruit first hand. Later I was wishing that I just kept walking and kept my urge to investigate in check and mind my own business.

The man had a bag full of these fruits along with the veggie trash that he collects daily for feeding his chickens. He wasn’t going to feed these to his chickens but he started telling me about all the good things that cajuil is used for. Another lady walking down the street stopped and chimed in. Good for upset stomachs, diarrhea, fungus (not sure exactly what funguses), removes calluses, makes a yummy sweet and some other things I didn’t understand. 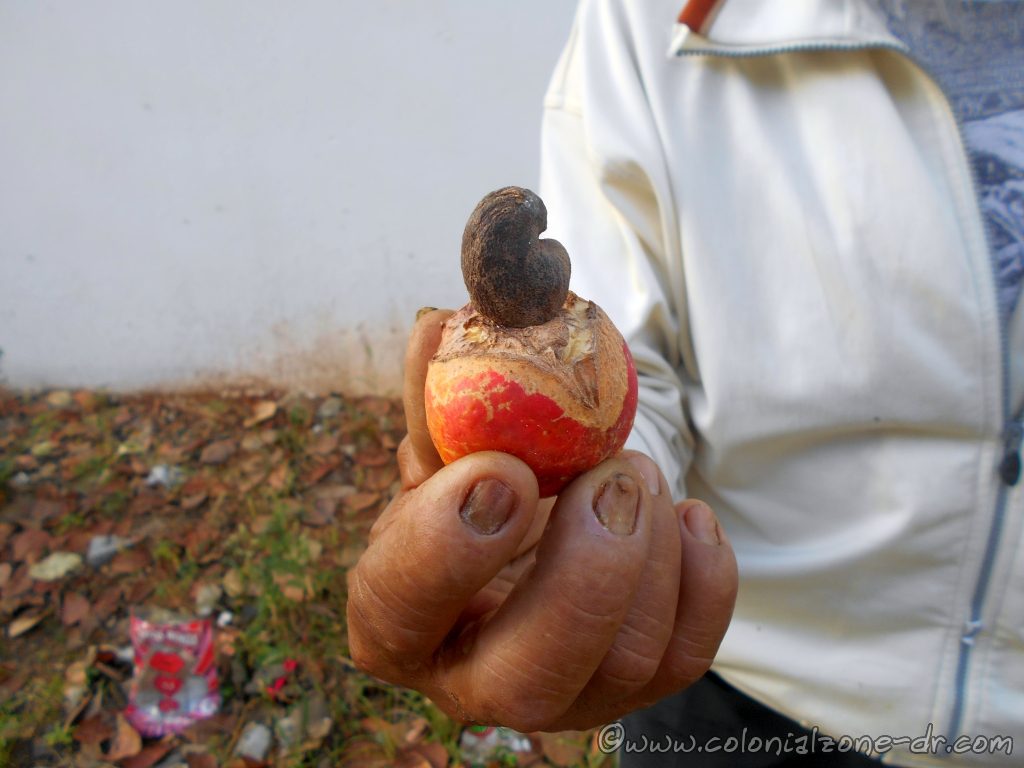 The man gave me one, only one, of his precious fruits after I asked 3 times. I wanted to open the seed shell to see a cashew “in the raw”.

When I got home and got Teli and Buena their bones and Bugger (the neighbor cat who comes to my window) his food and my coffee I went into the discovery mode. I rinsed off the fruit and removed the seed. I tried to squeeze the seed and found it to have a little bit of a rubbery feel. I decided to use my teeth to bite the leathery covering open. I bit, I gnawed, I twisted and gnashed at it until it started tearing open. Then, to my surprise I got a burning sticky tar-like feel in my mouth. I decided that I would have to use a knife to finish exposing the shells innards. 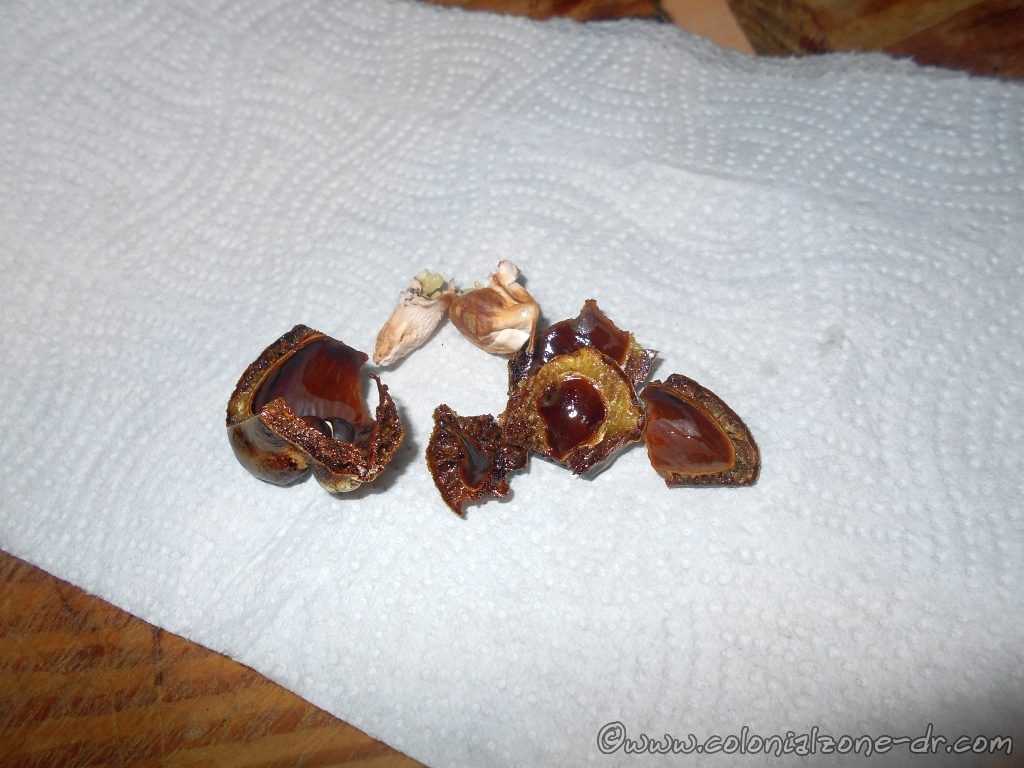 After sawing and slicing I finally, with much disappointment, exposed the teeny tiny milky white seed inside. It was a let down. I thought I would see a big seed like the cashew nuts I love that are in the store. This thing was all little, wrinkley and shriveled looking. I bit into it and it was sour and chewy and very unappealing. Then the unimaginable happened. I started burning.

My mouth, lips and side of my chin where I viciously tore at that vile seed started burning. My mouth area and fingers were covered with a sticky substance that was burning. I tried washing it off with soap and the stickiness wasn’t coming off. So I went to the computer and got on the trusty knowledgeable Google and did a search. What I found made me want to smack myself upside the head. How could I have been so DUMB-STUPID-DUMB!?!

I learned that the seed covering is filled with a sticky substance called urushiol. The same stuff in poison ivy, oak and sumac. Who woulda thunk that a little seed could be so evil. And I, before researching, just bit into the thing like so many others that I read about on the internet. The most helpful info I found is this article, You’ve Got To Be Nuts To Eat A Cashew Nut Shell. Where I found that many people did the same thing as I did, biting then researching instead of researching THEN NOT BITING.

In USA when I was exposed to poison ivy as soon as I got home I would shower with Fels Naptha soap and wash my clothes. I didn’t have any Fels Naptha so I first used jarbon de guava washing my face, mouth and hands and also the knife and computer mouse that I touched with my sticky hands. I got rubbing alcohol and re-wiped everything. I used laundry soap, witch hazel, more jarbon de guava and more alcohol all the while telling myself how incredibly stupid I was and wondering why the man didn’t warn me, which maybe he did and I didn’t understand his Spanish.

I disposed of the cajuil, seed, shell and fruit. I wanted no part of any of that thing. My fingers and face were burning. A small blister started growing on my lip and my tongue was a little white. The web site said that sometimes it took a few days for all the bad stuff to show itself and bad stuff could last for weeks. Swollen eyes, burns, peeling skin. I just had to wait. 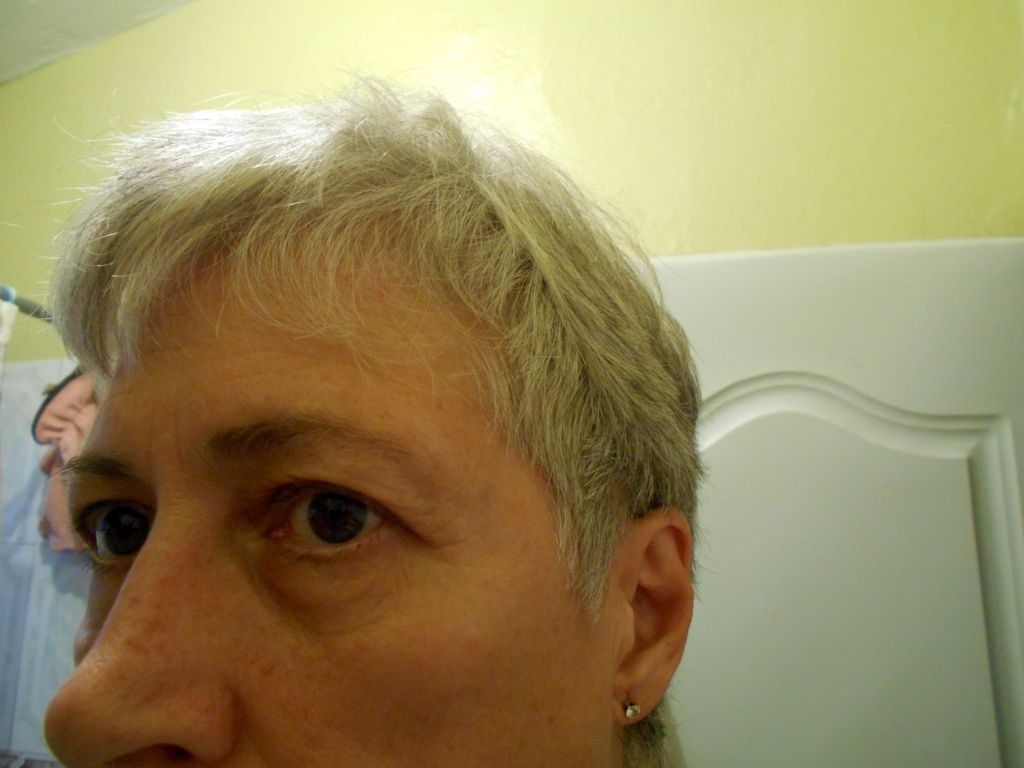 My eye got a little swollen from the stupid cajuil.

I did get a little scab on my lip and one, looking like a little drip in the center of my chin. My fingers tingled for a few days. My eye got a tiny bit swollen. That was it. Thank goodness. Maybe all the scrubbing and washing I had done did the job of washing away most of the oils. Who knows but, thank God, I was spared the nastiness of the cajuil seed.

I went back to that tree 4 days later. I wanted to make the dulse de cajuil I read about. I thought that after the hard rain there would be some fruits on the ground. I was wrong. I thought I would use the same technique the man used and throw stuff at the tree. I picked up a piece of cement block and as it flew into the air I rethought that action. It didn’t hit the tree and came falling back down near me. I am not a good aim and throwing a heavy stone is not the smartest idea. So there was a broken rubber shoe laying nearby. I threw that and came nowhere near to the tree. I was holding the 2 dogs and laughing out loud at my inability to throw and hit a big tree when a man across the street walking his little dog saw – heard me and came over. 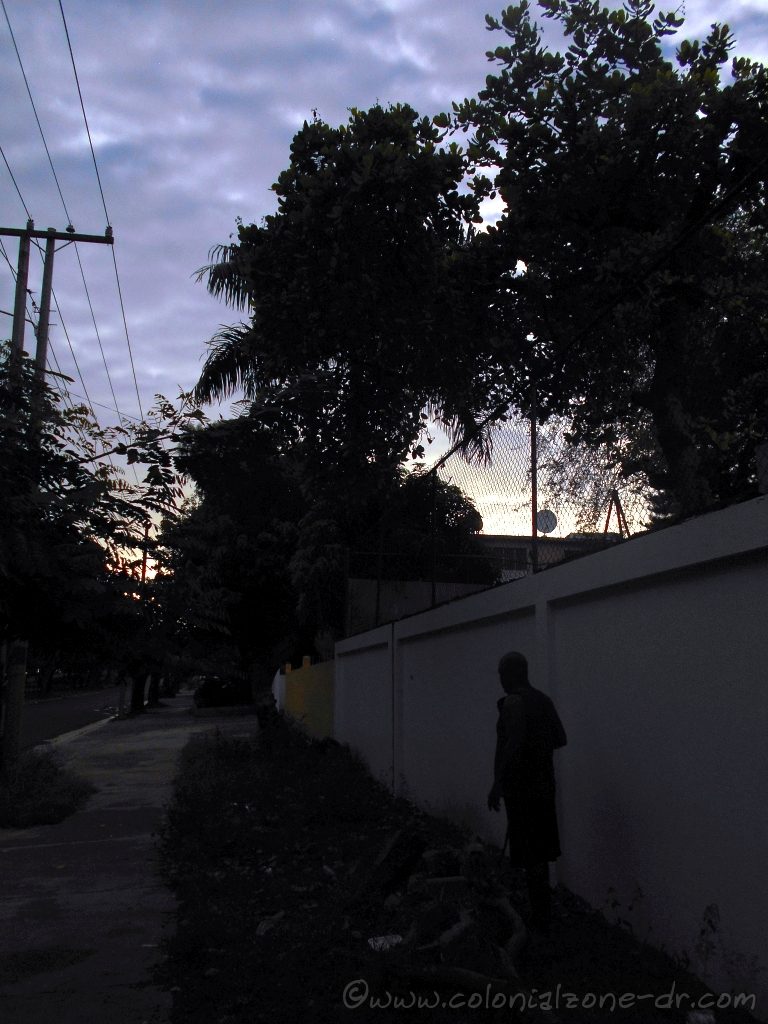 The man helping me get cajuil fruit from the tree.

He said he would help me and he got me 4 fruits. I told him that was good enough. I was telling him about my stupidness biting into the seed. He laughed. I laughed and I was off with my bag of mangos I picked up during my walk and my 4 cajuil fruits. 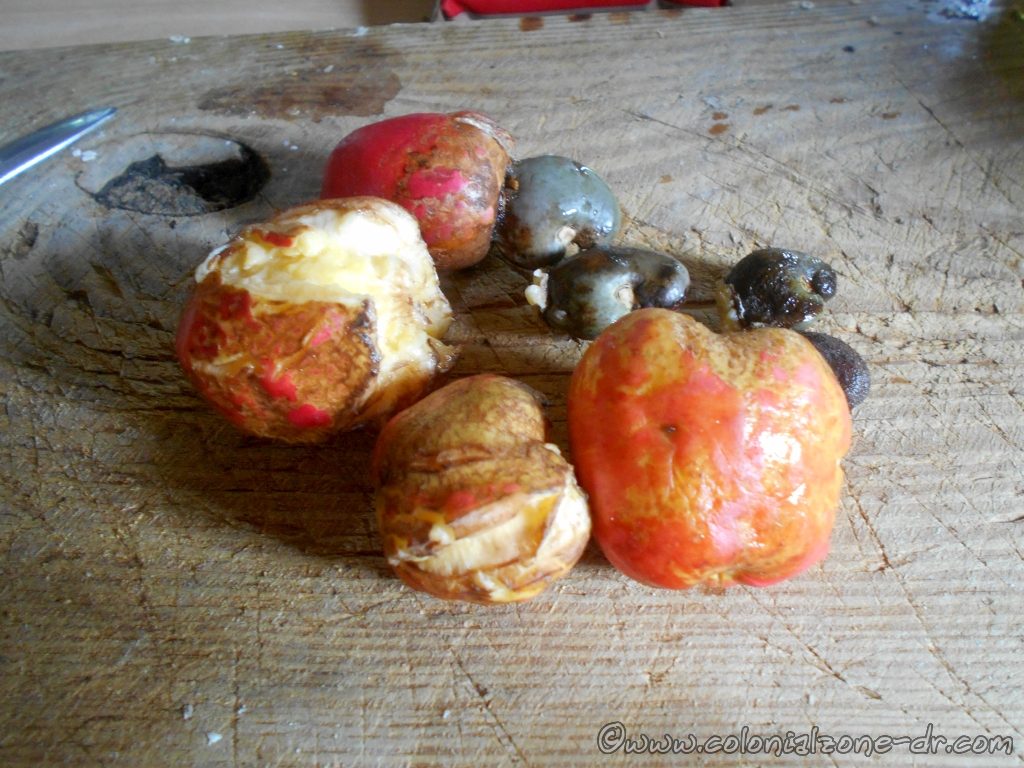 I separated the apple from the seed. I used a plastic bag so the seed never touched my flesh.

I got home and did the morning stuff. It was Sunday so I had to get the fridge defrosting, dogs boned..lol..and cat and dogs fed and me coffeed and juiced. Then, I went to work making Dulce de Cajuil. 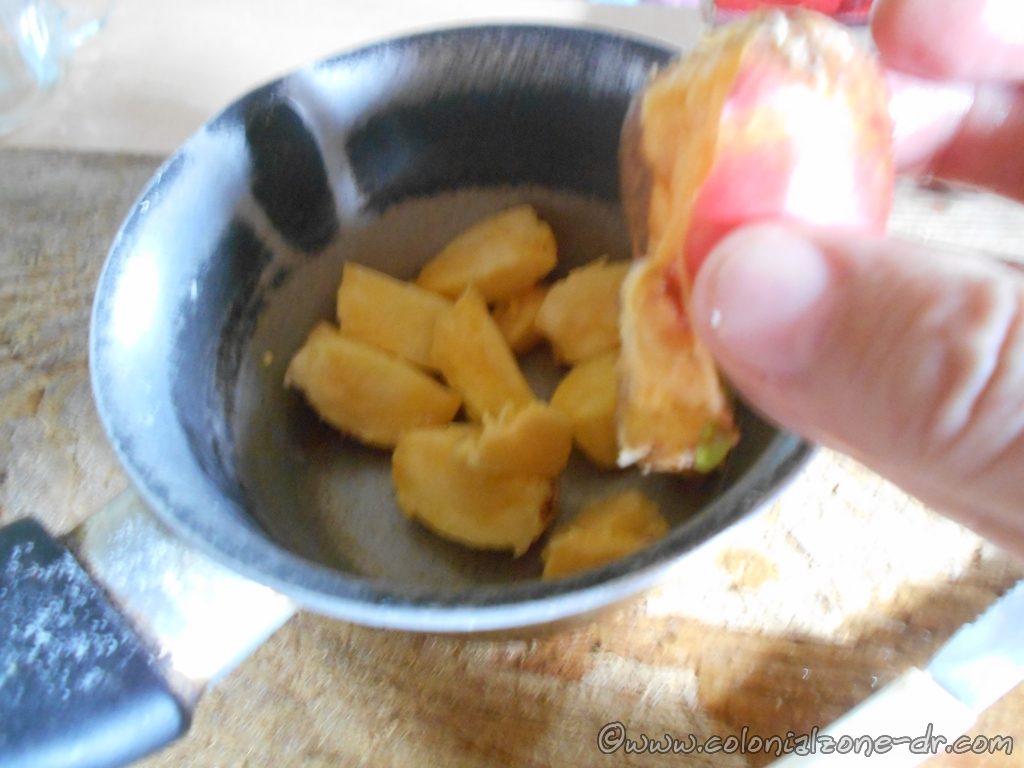 I peeled, boiled and cooked the inside of the fruit. I threw the nasty bad bad cashew seeds in the trash where they belonged. I half way followed Clara’s Recipe Dulce De Cajuil on the Dominican Cooking site. I didn’t have the amount of fruits that she had and didn’t have prunes so I just winged it. 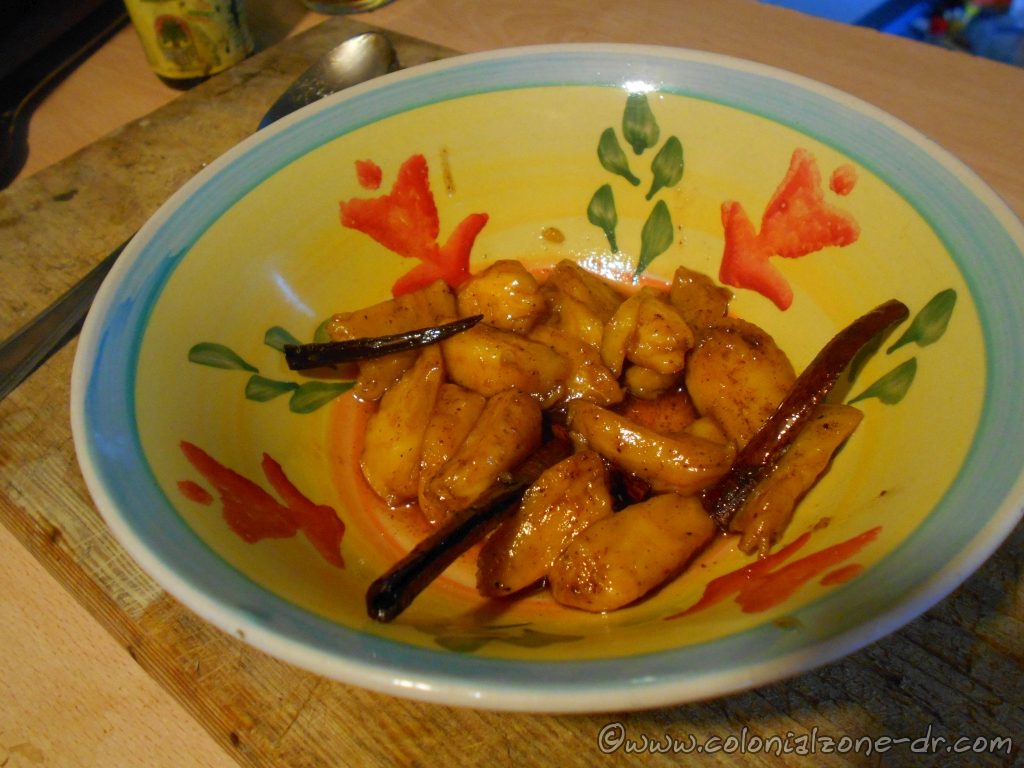 I call my type of cooking Ala Janette when I half way follow a recipe and make it my own. I used the basic ingredients and instructions and this is what I came out with. Dulce De Cajuil Ala Janette. It was good but I doubt I will make it again. I’ll just buy it. It’s much easier and safer.

One thought on “My Cajuil Experience”