I know that Saturday is not Sunday but a few Saturdays ago my brain thought it was Sunday. It took me a while to realize I had the wrong day. Definitely a full brain fail on my part when all I wanted was some chili peppers. That’s all, I just wanted to buy a few pounds of chilies at the Mercado Barrio Chino / China Town Market in Santo Domingo.

I woke early on Saturday (I thought it was Sunday) so I could get to the Mercado Barrio Chino / Market at China Town. I like to go early before there are too many humans because people get weird about the dogs. The main reason was to get some chili peppers. I was almost out and I was out of salsa picante / hot sauce. I got Inteliperra and Buanagente dressed (that’s what I call putting on their harnesses and leashes) and we headed out before the sun rose. 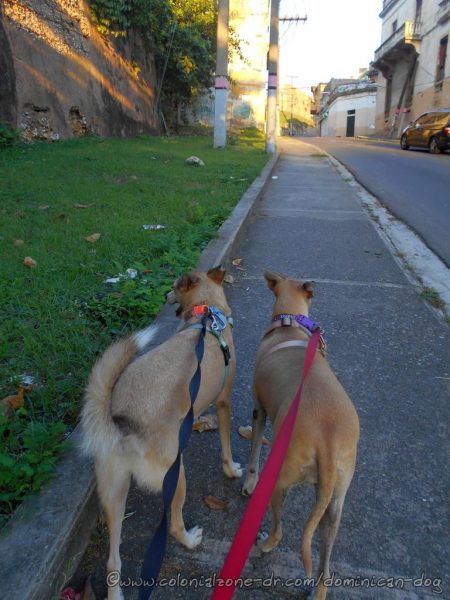 I was all ready for the crowds and to control the dogs. We came around the corner and there was nothing. No humans. No ducks and chickens making a ruckus. No fish smells. Nothing. Noone. 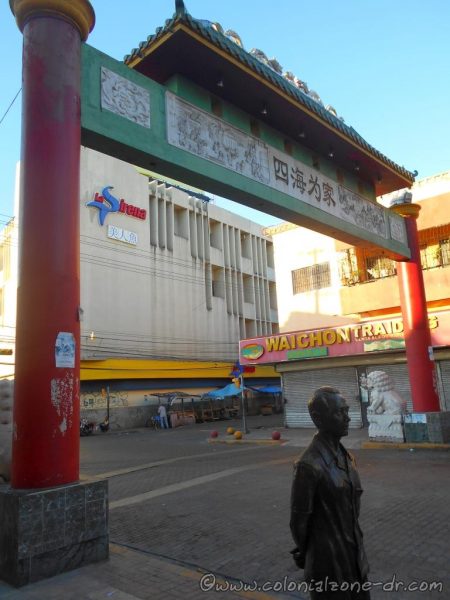 Entrance to Barrio China at the Sirena, Ave La Mella.

I saw a person walking and asked him what happened to the market. He said that the market is on Sundays. I gave the man a duhhh look. I’m sure that my jaw even dropped a little. All of a sudden the light came on. Like a light bulb lit above my confused head, as my brain slowly realized the truth. It was Saturday and not Sunday!

Now stupid did I feel you might ask? Well, let me tell you, I felt really stupid. I really wanted my chilies so I decided to head to Mercado Modelo and see what we could see since we were halfway there already.

On the walk Buenagente saw an old friend that he had to greet then bark at. 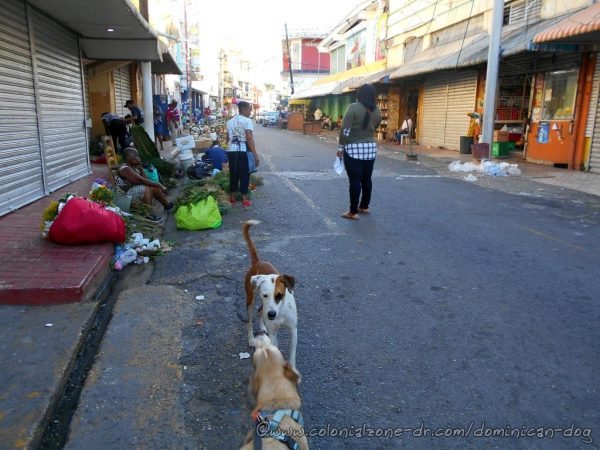 Buenagente sees an old friend on the way to Mercado Modelo.

We finally made it to Mercado Modelo. 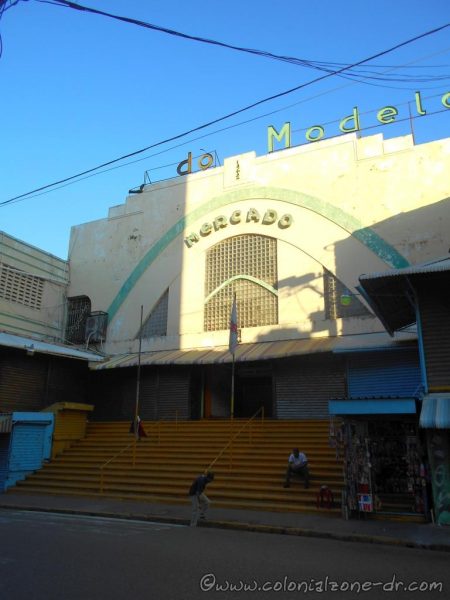 A few of the vendors had chilies but they are so much more expensive there. I didn’t buy any. There was no way I was going to pay RD$25 for 6 peppers when I could get an entire pound for that same amount.

We walked around a bit and visited the street where they sell flowers. 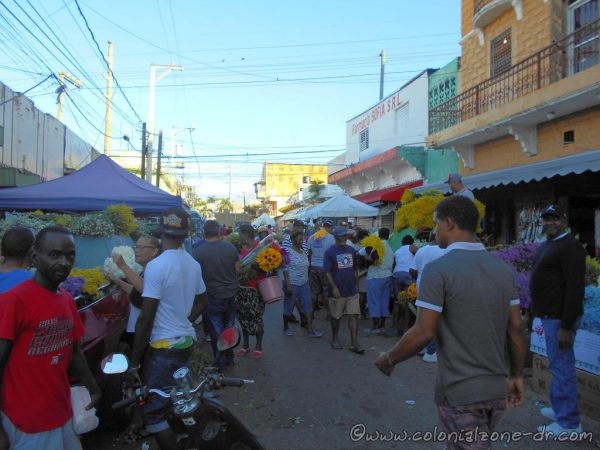 Buenagente loved all the humans around but Inteliperra was getting nervous so we just watched the commotion from a distance. 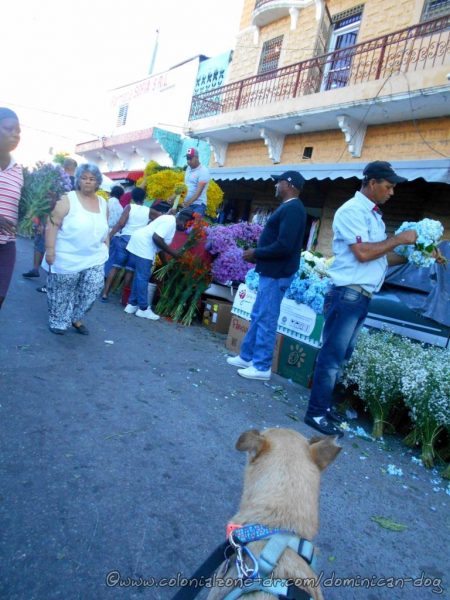 Buenagente was checking out all the humans at the flower market at Mercado Modelo.

It was starting to get warm out. I was ready to head home.

We headed back to Barrio China down a different street. We walked to the Confucius statue at Plaza del Zodíaco. I got a bottle of water and a ham and cheese empanada to share with the dogs and we sat in the Plaza and had a drink and snack.

We headed back home with happy tummies but no chili peppers. 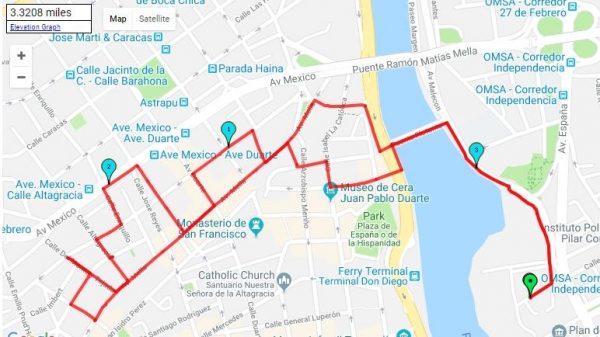 The Walk-About route on a Saturday that I thought was Sunday.

The story is not over.

Two weeks later on SUNDAY, I made sure it was Sunday and the dogs and I headed out again for my beloved chilies. 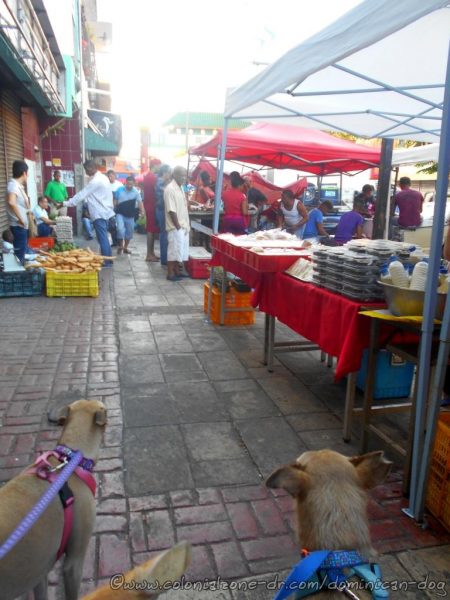 There were humans there. There were chickens and ducks making noise, there were fish odors, there was hustle and bustle already early in the morning. Best of all, I got my chilies. 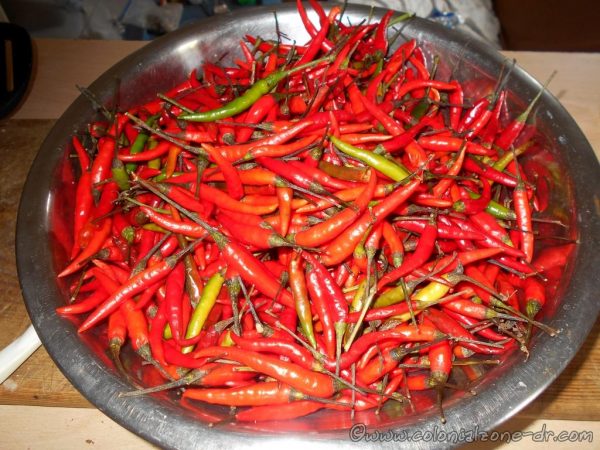 My chili peppers I bought at Mercado Barrio China.

I got 2 pounds for RD$50 pesos. Good deal. I am content. I made some hot sauce. I have some in the freezer and some are drying in the sun. I also handed out a little to some of the neighbors.

I will say it again, I was and am one content human.