I decided I best get to the Zone to get some pictures in the daylight so I got Buenagente all dressed up in his Christmas finest. His grandmaw, Mammy, mailed both of the dogs Christmas collars and I sewed up a hat for both dogs. So, at 12:30pm we were off to see what and who we could see. It also happened to be Noche Larga de Museos and I knew there would be lots of humans mulling around.

Just a little heads up. Many of the pictures are not great. Many are blurry but I have to use them anyhow. Buena wasn’t into stopping every 5 minutes to take a picture so I had to take them on the move.

Since I moved to the “Otro Lado”, the other side of the Rio Ozama we don’t get to walk the Zone every day. It is only about a 10-minute walk away but there is no shade and crossing the floating bridge can get really hot. But we braved it out.

We started by walking down El Conde. 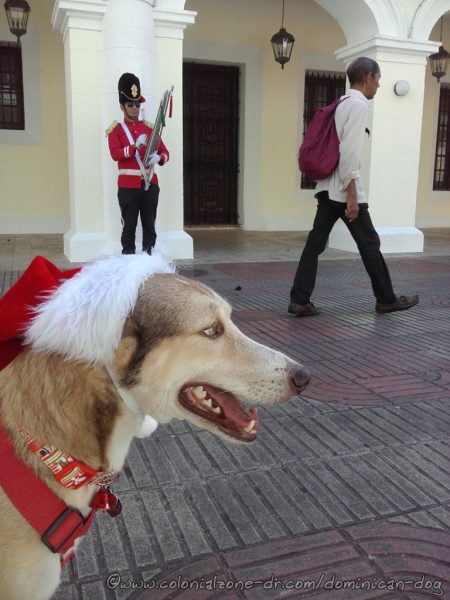 People were loving Buena in his Christmas hat. So many people were taking pictures of him and many had to kneel down and get a selfie with Buena. A lady even interviewed me about how I adopted Buena.

Finally we got to Duarte and Buena wanted to make his excape from the Conde and all the humans. He knew exactly where he wanted to turn so he could go to Parque Duarte. 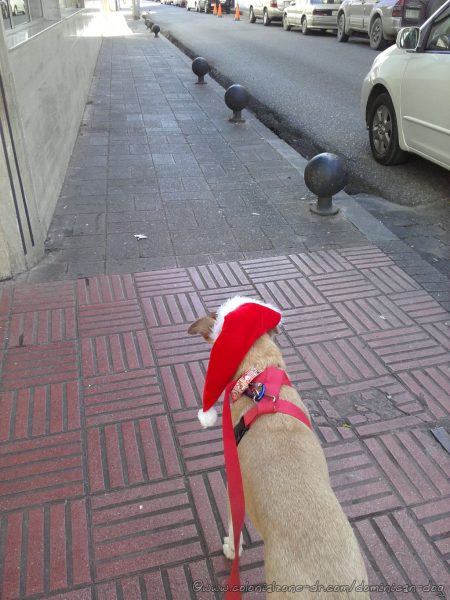 Buenagente heading to Parque Duarte. He knows the way.

We ran into our friend Zippy so she joined yo in our walk for a while. 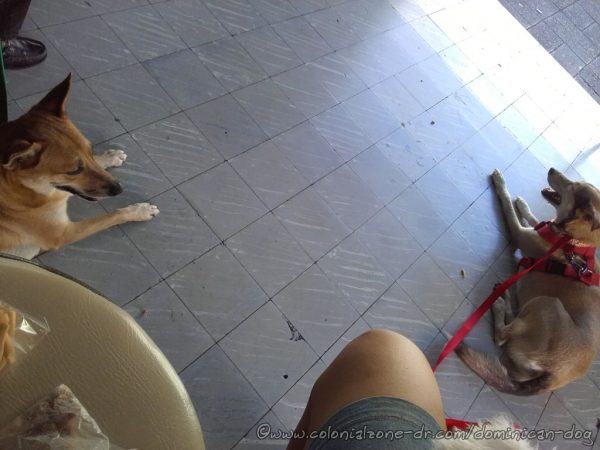 Zippy hung out with us for a bit.

Then we ran into our one-eyed friend O-Ee. She must have heard Buena barking at his friends on our old street corned because she came running from wherever she was sleeping and greeted us. She wqas so happy to see us both. 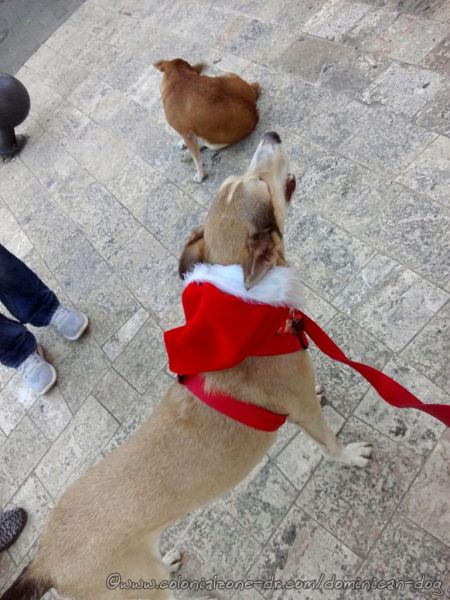 We met up with O-ye.

We had to visit the Christmas Tree at CODIA and Buena wanted to visit his friends there for a minute. 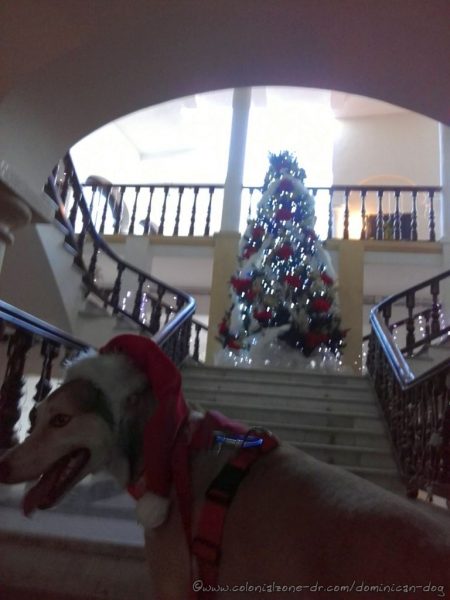 We decided it was getting time to head home and we strolled down Calle Las Damas. When we got to Casa de Bastidas they were having a private party. Santa Clause was there! It was a really good looking Santa too. When he saw Buena standing at the doorway (they would not let us in) he pointed, laughed and waved at Buena. 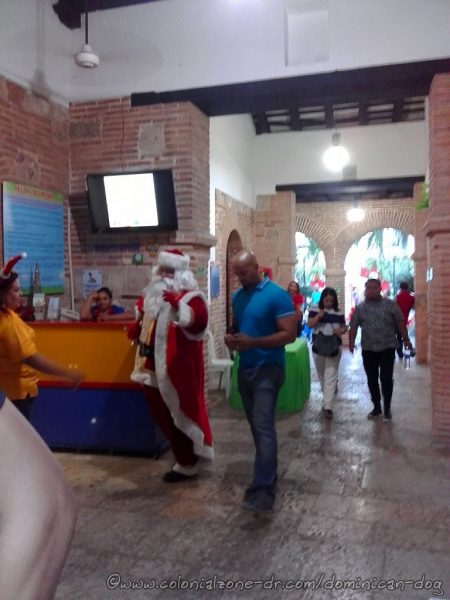 We made it to Casa Reales and there were some costumed characters so we got a pic and so did many other people aroujnd. 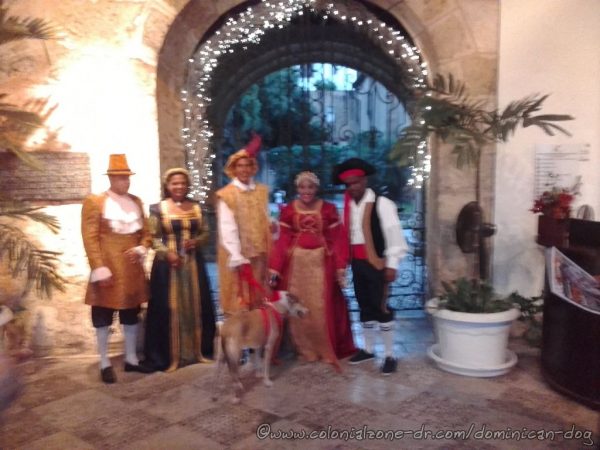 We were trying to get home before it got dark. I didn’t want to cross the Puente Flotanto when it was night on a weekend and we both were getting tired. 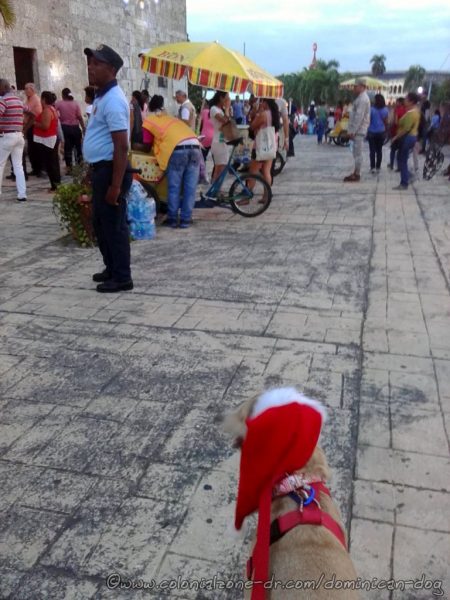 Heading into the crowd at Casa Reales

We didn’t get far and there was another picture taaker. There were many more as we made our get-way. 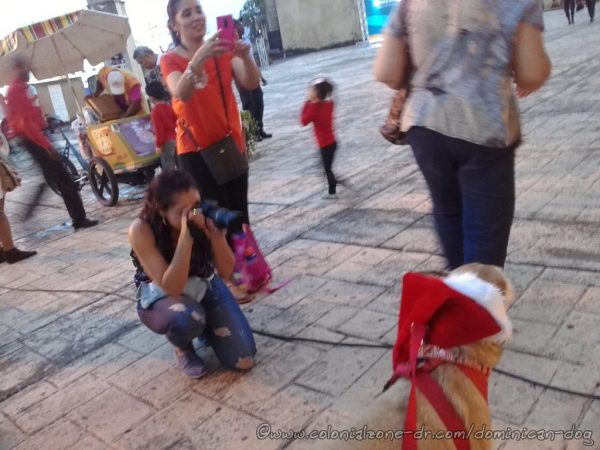 We finally got home as the street lights came on around 6:30PM. It was a long day. It was nice seeing all the old neighbors. Buena was enjoying getting all the attention. I got a big blister on my toe.

Teli was waiting on the balcony for our return. She prefers to stay in the house than to be around crowds.

Buena went straight to the bed and I followed him there after my shower. It was a good day. I just wish the pictures turned out better.

One thought on “Buenagente Visits The Zone in Christmas Finest”