How can humans be so cruel!? It just amazes and disgusts me. A puppy, innocent and sweet enduring such cruel treatment.

This morning walking on one of the paths at the Faro a Colón (Columbus Lighthouse) the dogs were looking down a steep wall into the grass. There was a dog down there. I threw a treat and noticed that he couldn’t reach it.

I walked up further and let Buena and Teli loose to run and went back to the dog.

The poor puppy was tied to a tree and dropped into a deep area. It could not even touch the ground with its front feet! It was standing on its hind legs so it did not choke! 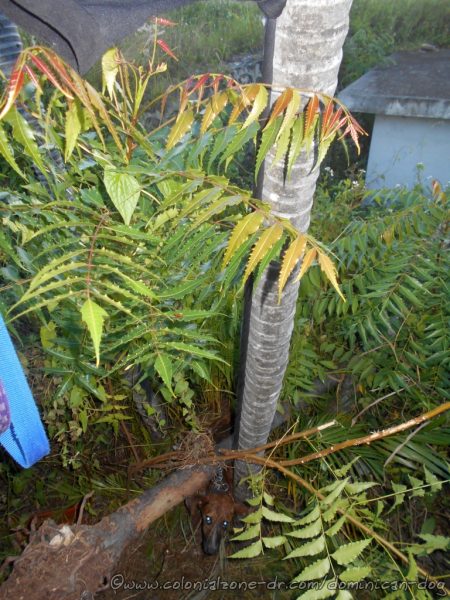 Dog is the hole hanging from the tree

The poor puppy was not even barking or crying. It was just standing there dangling. I had to untie about 4 big knots in the cord that was tied to the top of the tree. Then I climbed down into the hold and tried to untie the line from the collar. I couldn’t untie it. Whom ever tied that dog did not want it to escape.

I got the collar off and the puppy just stood there. Probably traumatized. I patted it then gave it a few pieces of liver that I carry with me. I lifted it out of the hole and set it on the walk.

The puppy was so thin. But it jumped up and licked my hand and ran off back towards the houses across the street. Probably returning to who ever tied it there in the first place.

I cried. I cannot imagine how someone could be so cruel. At least tie the puppy where there are people so maybe someone might take it and give it a chance. I keep thinking what if I didn’t go back. That dog would have been dead by tomorrow. Hanging in that tree.

2 thoughts on “Abused Dog In The Tree”