Sleeping soundly at 3 am with visions of jelly beans in my head (I don’t have any jelly beans but a can at least dream of them). I hear yelling outside. I ignore it. Then more yelling. So I rise from my bed to see what was the matter. I peek out the window.

*Important note. The beautiful pictures (lol) are by a very talented artist (sic). These are reenactions of the incident since I did not take pictures during all the action. I had to draw these fine images to represent the incident. Also note that the incident happened at 3am so it was dark out.

A man in an orange t-shirt (from now on he is called T-Shirt) and the guachiman / watchman from the gas station across the street (from now on he will be known as Guachiman) are yelling. The man Orange has a box speaker in his hand. Guachiman says lay down. T-shirt says he’s from the neighborhood and runs to the downstairs neighbor banging on the door. Guachiman keeps yelling at T-shirt to lay down. 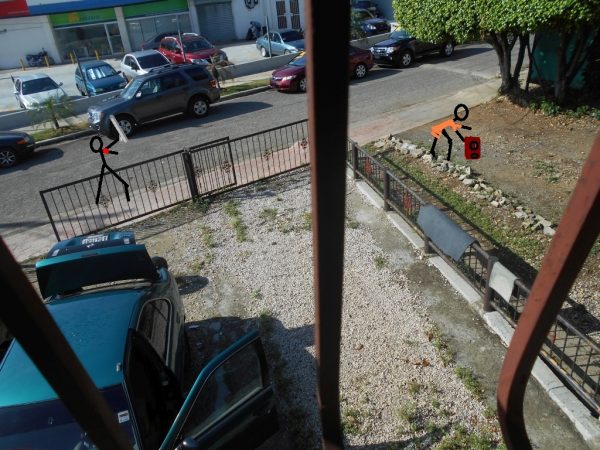 Guachiman shoots his sawed-off shotgun looking rifle into the air. It makes a huge bang. Buenagente and Inteliperra were barking on the balcony but ran for cover when the gun was fired. My brave guachi-perros..lol.

T-shirt ran to the edge or our building and went up the wall and was gone running on the rooftops. 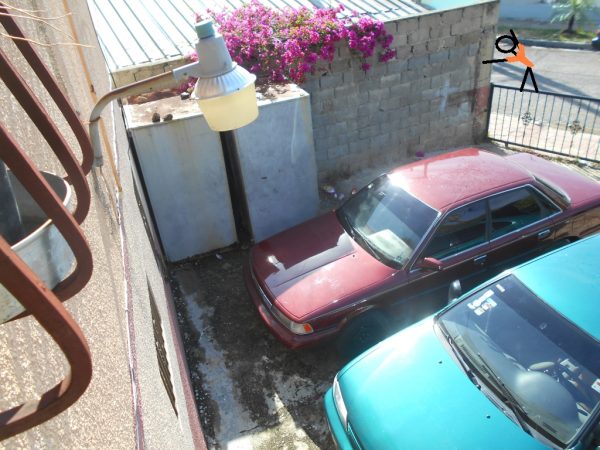 My building has 4 apartments, 2 on the first floor and 2 on the second. 2 of these apartments are occupied with military men that have guns. Everyone was outside. The ladies of the apartments, the military neighbors holding guns, Guachiman with his rifle and the 5 policemen who showed up on 3 motorbikes. All are out to get Orange T-shirt guy.

While all were gathering in the front of the building discussing the situation I stayed inside and went to the back window with my lights off to watch to see if T-shirt was on the rooftops. After about 5 minutes he rose up from his laying down hiding spot and was on the rooftop patio across from me. 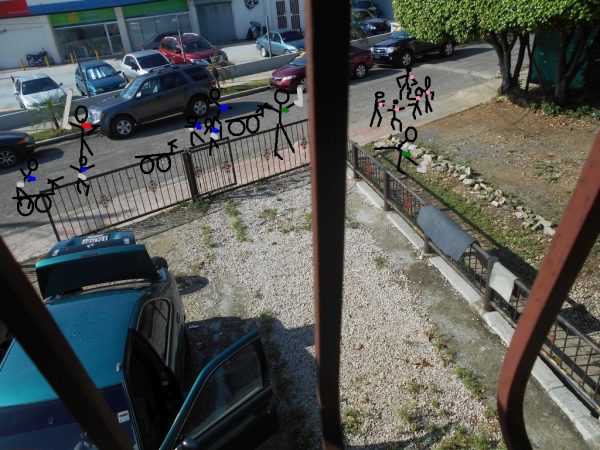 All discussing the incident.

I went to the balcony and informed the crowd out front. The military neighbor with gun came in to look out my window. T-shirt guy was climbing down from the roof top patio to the next street.

All this time my brave dogs were hiding in the bedroom. Teli did come out to bark at the neighbor in my apartment with gun. Buena stayed in hiding. Teli is very protective of the house.

Police went to hide on the corner of the next street waiting for T-shirt to come down from the roof. About 5 minutes later the 2 policemen come back to the front of the building with T-shirt where 5 women, 2 men with handguns, 1 Guachiman with shotgun and 3 police on 3 motorcycles were all waiting. I was watching from the balcony with Teli while Buena was still hiding in the bedroom.

T-shirt was trying to say he’s from the neighborhood. The ladies were saying that he’s not from here. The police kept lifting T-shirt up by his belt and turning him around as T-shirt was flailing about. Military neighbors and Guachiman were holding their guns down to their sides. I stayed on my balcony watching from the shadowy safety of my apartment. 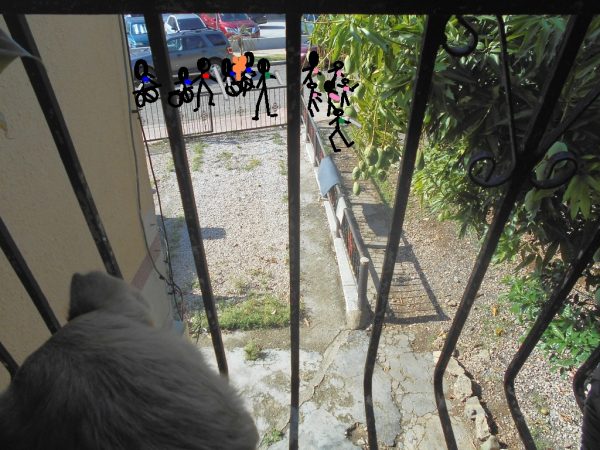 Lots of talking later T-shirt was loaded on the motorbike, sandwiched between 2 police heading to the police station. The neighbors stood around about 5 more minutes, maybe longer, discussing it all. I watched for another minute from the balcony then went back to bed.

Teli is sleeping beside me. Buena still hiding beside the bed sleeping. Me…wide awake. Cannot get back to sleep.

I hope the Easter Bunny wasn’t frightened away by all the commotion.

*Note Easter Bunny was not frightened. He brought my kids their eggs, some bones, some salami and a can of sardines. 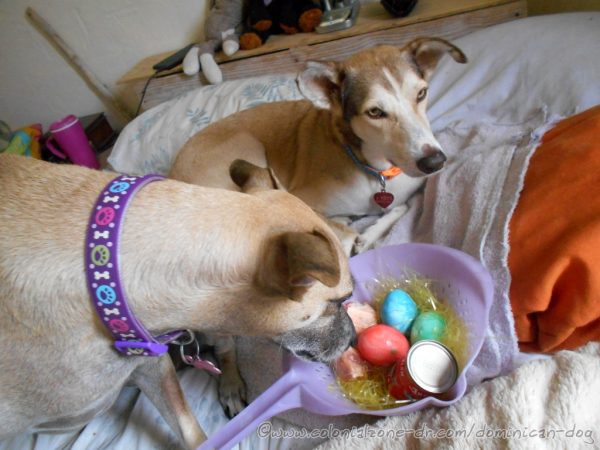 Teli and Buena with their Easter basket 2017

Happy Easter to all.