It was time to renew my residency. I so hate dealing with all the bureaucracy but it must be done.

I helped a friend about 6 months ago renew his. It was so difficult. So much has changed in just a few short months. Thank goodness.

My taxi -friend, drove me to the Migración office. It is right on the Malecon, the road that runs beside the Caribbean Sea. 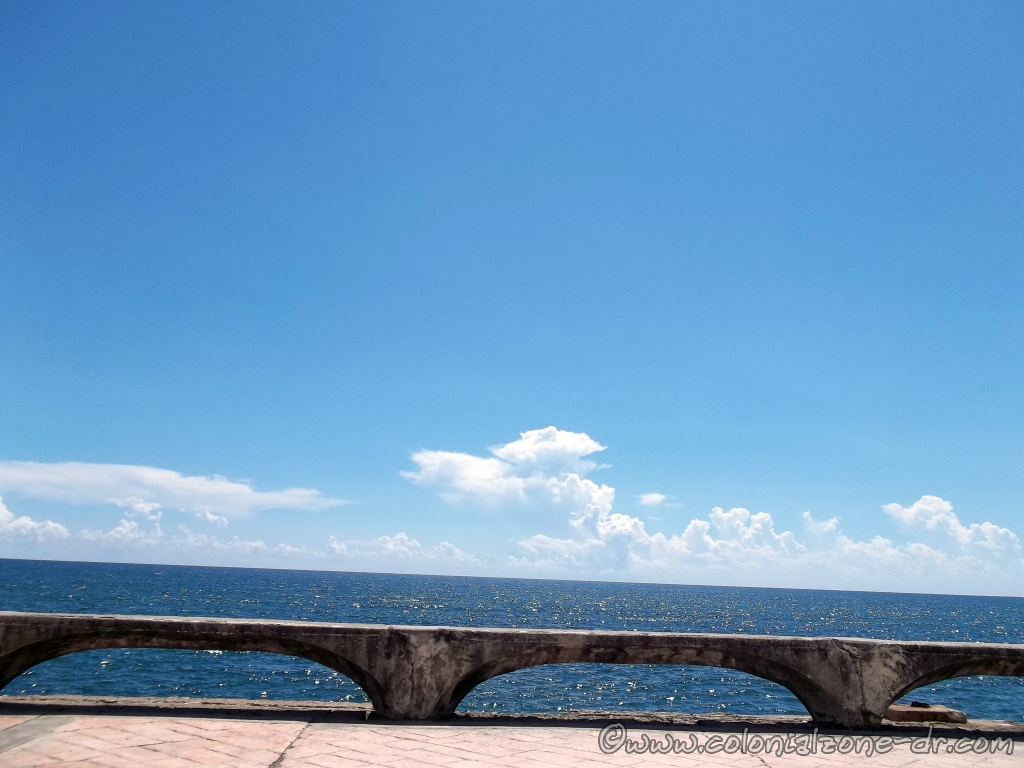 The Caribbean Sea view from the Malecon in Santo Domingo.

I hurried and got into the line to pay for my medical stuff. I waited and when I got to the window they told me I had to go to a little computer desk and get a number. What? I was just there not too long ago and this was all new.

The man giving out the numbers remembered me from being there with my friend so he gave me my number and we chatted a bit as I watched one of the 2 monitors for my number to be called.

About 5 minutes later I was called. I went to the window and gave them my information then had to go and wait more until they found my previous renewal and documents. Then they called me to a different window to pay for the form ($100 pesos). About 10 minutes later my number showed. I went to the caja (Caja is translated to box in Spanish) and I paid for the medical stuff $4500 pesos. Then I had to take a taxi to the medical offices in Gazcue where they did the urine analysis, blood work, chest x-rays and medical background.

The man asking the questions also remembered the ole Gringa from going there with my friend. Then I went in to pee in a bottle while the lady watched. I filled the entire bottle to the top and when she saw it she took the bottle, with her plastic gloved hands, and said they did not need that much and she dumped the pee into the sink where I was washing my hands! A hospital did this when there was a working toilet right next to the sink!

NASTY! I was appalled but I said nothing. I did not want anything to go wrong because the lady did not like me.

Then she proceeded to sit me down to take my blood. She did not change the gloves. She used the same gloves on her hands that she handled the pee bottle with to take my blood! I kept my mouth shut but felt sick inside.

Then after I had to walk around to the side door of the hospital, making twists and turns, finally going down the stairs to the chest x-ray place. This went off without a hitch. I got my receipt which needs to be saved when you return to Migración in 10 working days. 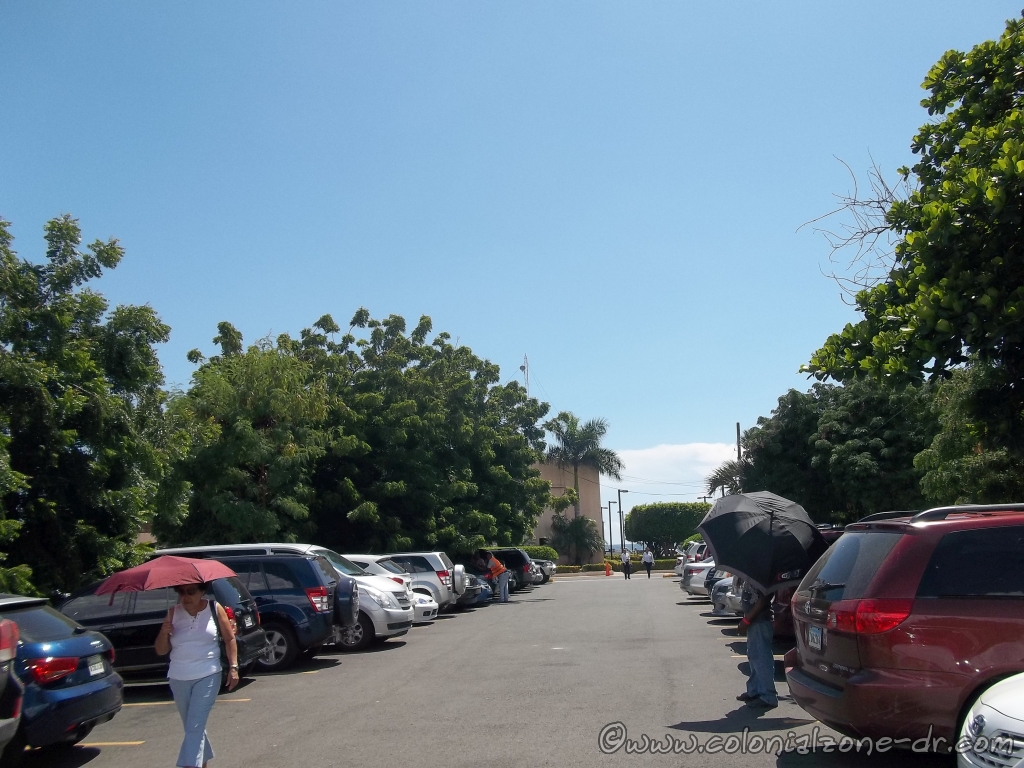 Parking lot of the Migración Office looking towards the front entrance of the building. 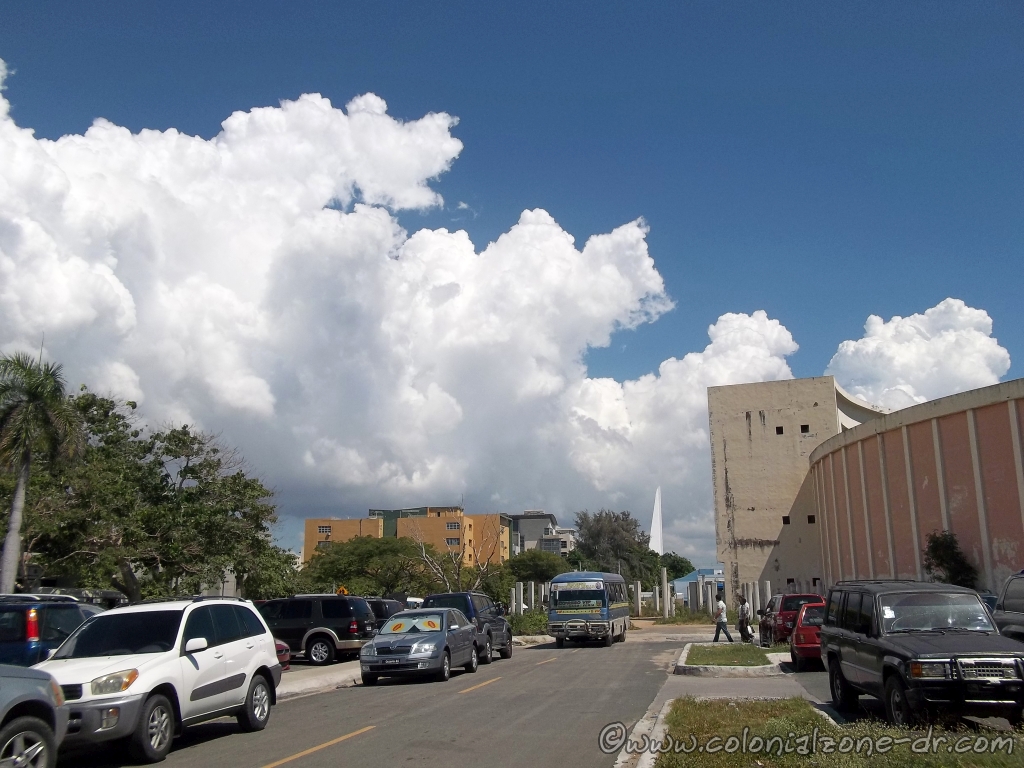 The view while I was waiting for the taxi. Wasting a beautiful day.

I went home and waited my 10 working days while gathering my Buena Conducta ($330 pesos for the taxes for this), made all my copies, collected all the cash I needed, making sure all was in order.

I was prepared. I returned to Migración. I was looking for the picture taking guys and some man is telling me “co9mmon, common” (which by the way I hate when people try to hurry me along for no reason). They moved the picture taking place to a little trailer in the back of the building which I thought was much better than sitting in the street like before.

I spent about 15 minutes getting my pictures then went inside the big building and got my number. They called me to the window to get finger printed. They took all my paper work. I waited, standing against the wall talking to some people I knew. Then a woman came from the back and asked my name. She left.

About 5 minutes later another woman came over and gave me a paper with her name, phone and instructions, telling me I had to go and do the blood work again! I asked why and she said she did not have that information. I was a little upset thinking first that I had come communicable disease. Then I thought about the way the lady took my blood before and that maybe she compromised the sample with her dirty, pee-bottle hands.

I took a taxi to the same blood place but it was not there. Someone told me it moved all together to the x-ray place so I went there. I handed the girl (the man I knew from the other years did not work there any more) my paper and she told me I needed to go to another place. I told her no, this is where they said to go so I had her call the number the lady gave me in migration.

They finally got it straightened out and I gave my blood. Again! Then I walked home because I needed to get some fresh air and relax.

I had to wait another 10 days and then call the lady at migración. I was so stressed for these 10 days thinking I might get deported. I might have some disease and they would not renew my residency. In the back of my head I figured they just lost the blood or messed up some how but I was still worried.

When I called the lady exactly 10 days later said all was good and to come and finish. I went right away.

They came out and took me special and when I went to the window to pay $8000 pesos for 4 more years I was feeling relieved. I figured I would not pay the $1000 pesos VIP and just return another time they scheduled to finish but then they told me I needed to pay a LATE FEE of $400 pesos!

I was so upset. It was not my fault I was late. They are the ones that screwed up my blood work. they made me late but this did not matter. I had to pay. I decided then to just pat the VIP as well because I just did not want to deal with all the crap again. I paid my money and waited for my number to show in the monitor while discussing all with a neighbor of mine from Brazil there to get her first residency.

My number came up. I went and got my picture and waited again for the card.

They called me about 10 minutes later to the window to sign the book and take my residency card. I did not even look at the picture I did not care. I just wanted to get out of there. But the police man at the window told me to please check the card.

It said I was from Puerto Rico. All my papers said USA. My previous documents from the past 13 years said USA. My passport says USA yet they put PR on the card. I had to give my passport to the guy and he disappeared for another 15 minutes.

He finally called me giving me my passport and the repaired Residency Card. I was good for another 4 years. YEAH!

After all this Teli and I went to the beach for a few days.

Next step was to renew my cedula which is the identity card everyone has. Mine says “No Vota” (no voting) on the back.

A friend, Walter who owns Aparthotel Condo Parque, Venus Bar and Cafeteria, and I went together to do this. When I took a friend 6 months ago the new biometric card cost about $100us dollars plus any late fees. When I called a man I know that works there to make sure how much money I needed to bring he said the renewal was free. Wow! I was one happy human!

We went and all went smoothly. I was very impressed. The ride to the Junta Central Electoral, there and back, and the entire process took a little less than 2 hours. We drove a man back to the Zone with us from France so he could save on a taxi.

So my permanent residency, which is really only temporary, is good for another 4 years along with the cedula. I sure hope the next time I can do my citizenship and be done with it forever.

These are the documents of the requirements to renew residency permanent in Dominican Republic as of October 2014. Remember, these requirements could change any time. 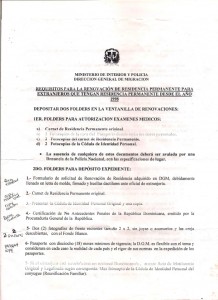 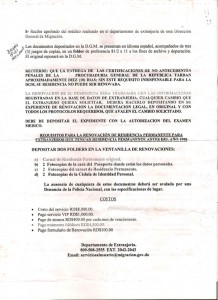