I so love waking early in the morning and taking Teli for her morning walk. It is still dark outside and the streets are empty of humans for the most part. Its just Teli, her friends and me enjoying the start of the new day.

I also love seeing the morning sky and the sun coming up.

Today is a holiday, Día de las Mercedes / Our Lady of Mercedes Day, so the Malecon had very little traffic. 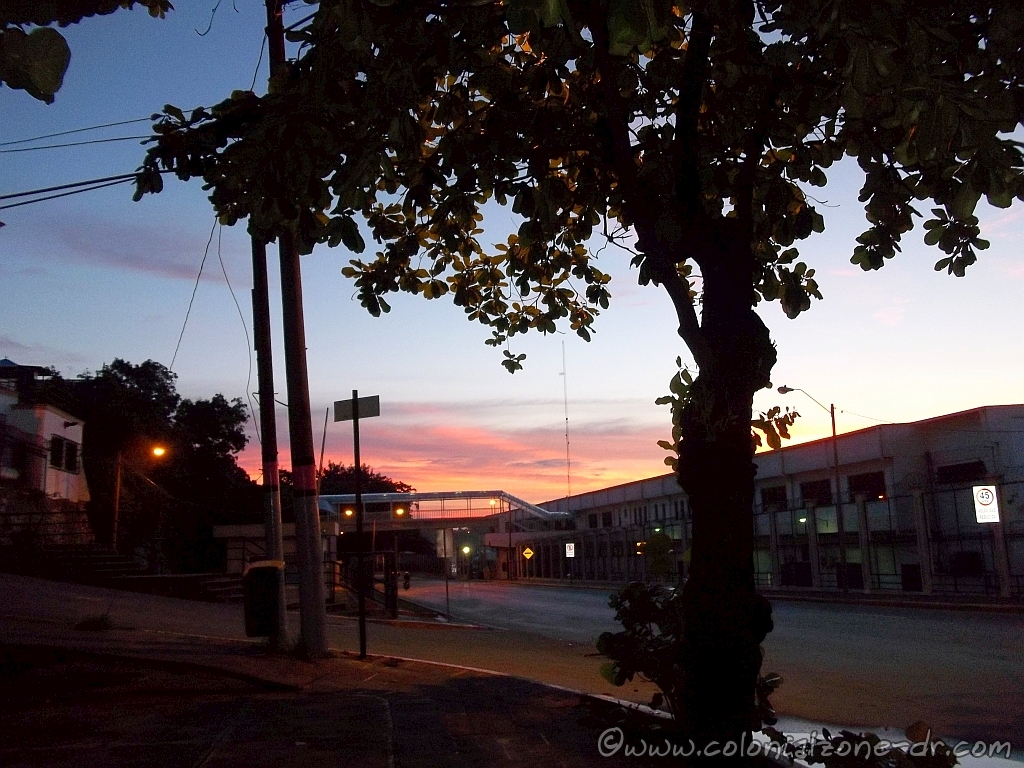 Dawn on the Malecon.

When we got to the beach it was still dark and there were big dogs barking in the darkness. I could not see who it was. I just yelled “hey” to them and we kept going not knowing if we were going to get attacked. Teli and Zippy (Zippy, the street dog freind, joined us today) did not seem to be too nervous. The camera caught the glowing eyes of 3 dogs laying in wait and barking. 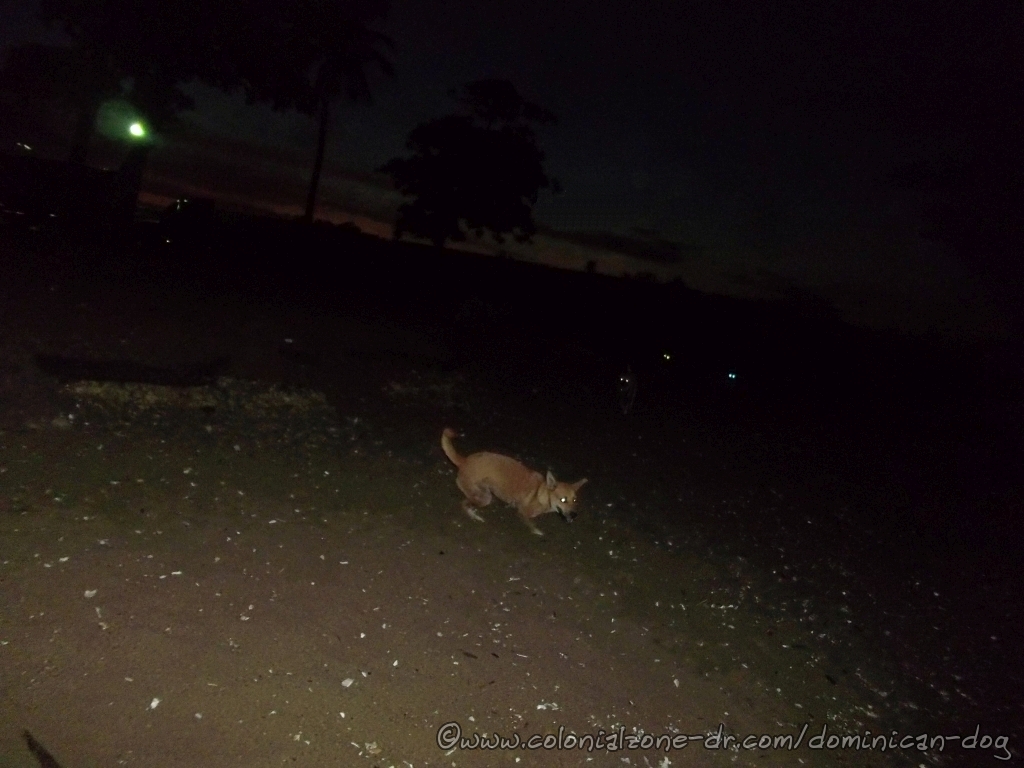 The biggest dog came out of the dark running. It was our buddy Bruiser and his harem, Mia and Lady. They came down from the Ruinas San Francisco where they live and were taking an early morning romp on the Playita Montecinos. Bruiser was happy and jumping up on me when he saw me.

Teli, Zippy, Bruiser and his girls all had a good time. Teli and Zippy love to run. They would run along the water then they would go and jump on Bruisers gang and all play around a bit. Then Teli would run again and get her toes wet in the surf. Teli so loves to run. Zippy went swimming. She is not afraid of the water at all. 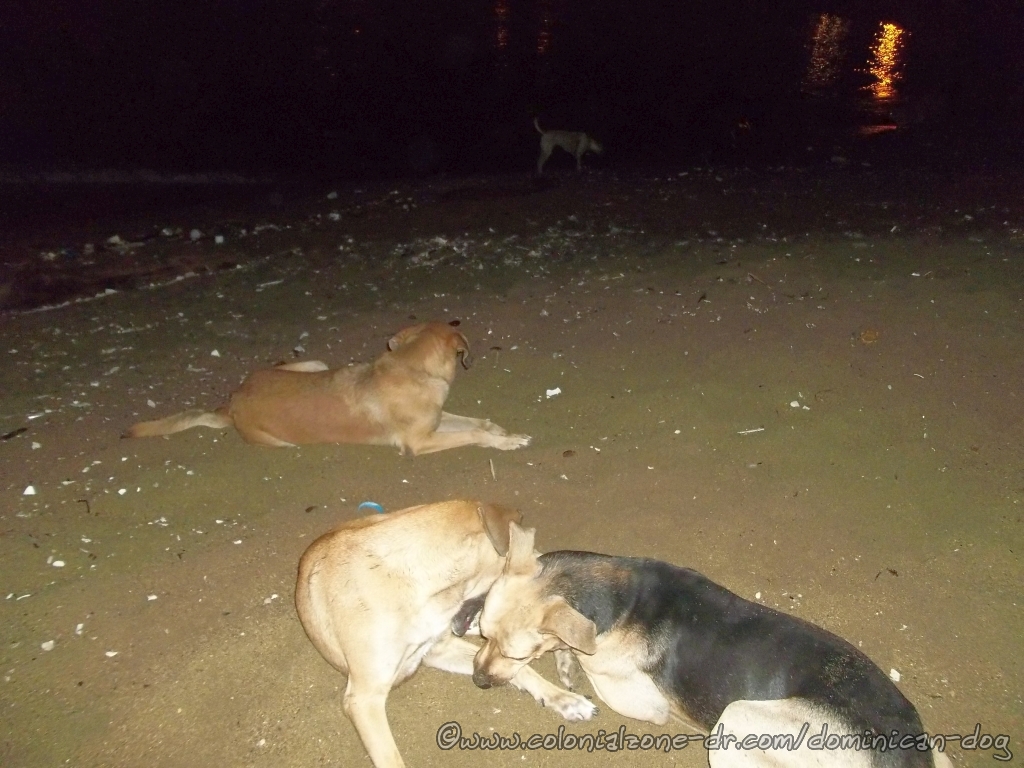 The sky started getting brighter and it was time to get the kids back across the Malecon. This makes me nervous because of all the cars on this busy road. I usually do not go if there are other dogs walking with me because of crossing the road but since today was a holiday and there was no traffic I was ok. There is a pedestrian bridge at the ADUANAS building and Teli and Buenagente do not have a problem crossing but Zippy and Bruiser are afraid of the bridge.

We made it back to our area. Bruiser and his girls went on their way. Buenagente was on the corner of Calle Meriño waiting for us with a few other dogs. They joined Teli and Zippy for the next part of the morning play time.

The dogs love the renovation work that has been happening in the Colonial Zone. There are no cars in the streets and they have their way without worries. They really love the sand piles and have a great time playing King of the Hill. Taking turns being on the top of the pile then fighting to be the next dog on top. (this picture was taken yesterday but they played this way today also) 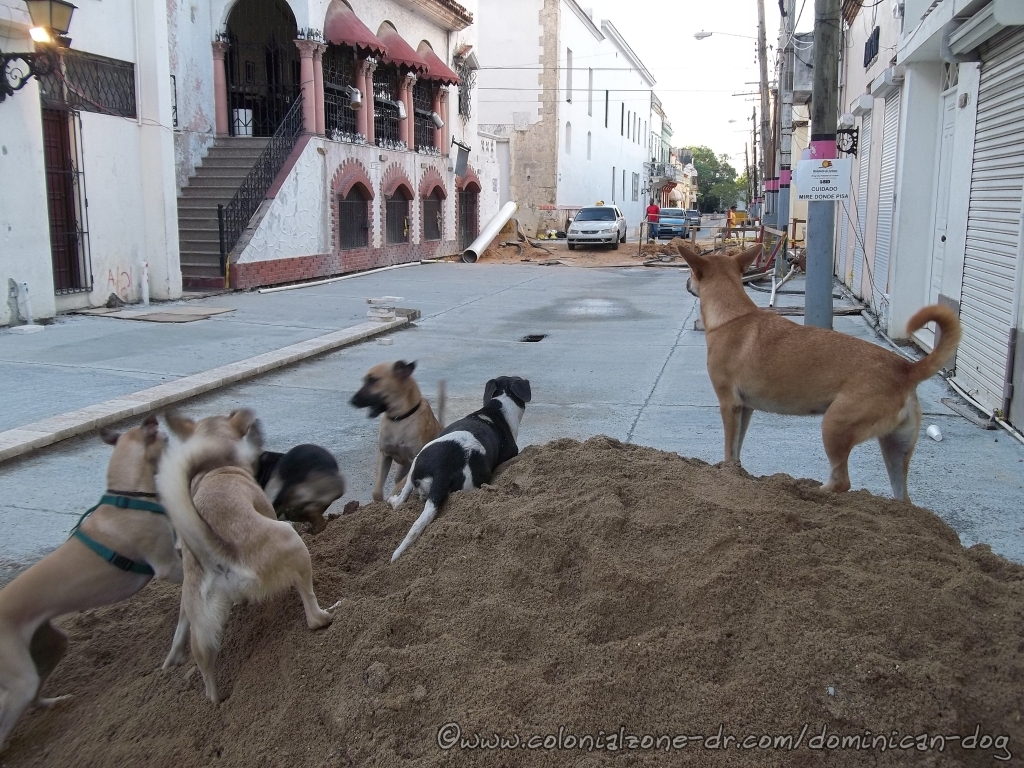 Zippy is King of the Hill for now

I so love watching “the kids” playing. They have a great time running and play fighting. This is one of the best parts of my day. Seeing the dogs, especially Teli, happy and enjoying life. This is why I wake up around 4 or 5 in the morning to take Teli out. It is so worth it to see her having fun.

It rained last night so the street is a mess. They did make us a little bridge and walkway so we did not have to walk through the mud. This white dirt has something in it that makes it really sticky and it is a disaster trying to walk through it when it is wet. It gets stuck to Teli’s toes and my shoes. Its like cement and not easy to get off, especially after its dried.

The walkways are a blessing but Zippy was having a hard time as she will not cross a bridge, even this little one, so she would not come inside for her breakfast. 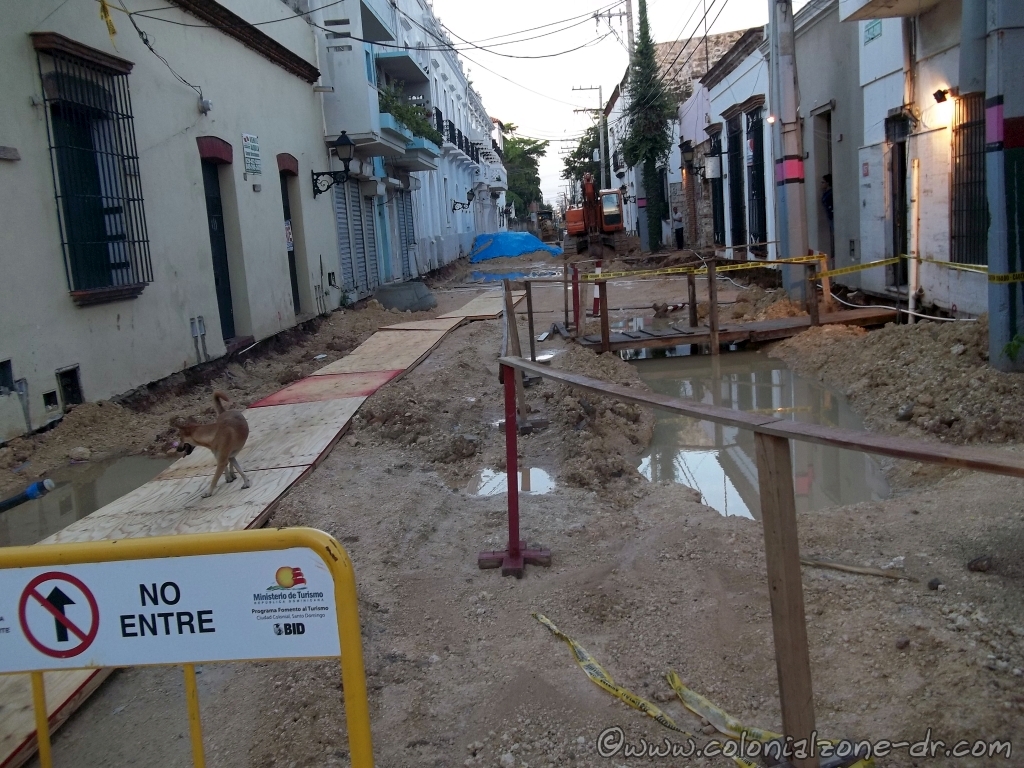 The hole under the bridge to the door of the building where I live was filled with water from the rain. Probably about 3 feet deep is my guess. Teli was way too curious about this water under “her” bridge. She laid on the bridge and hung her paw over the edge to touch the water. 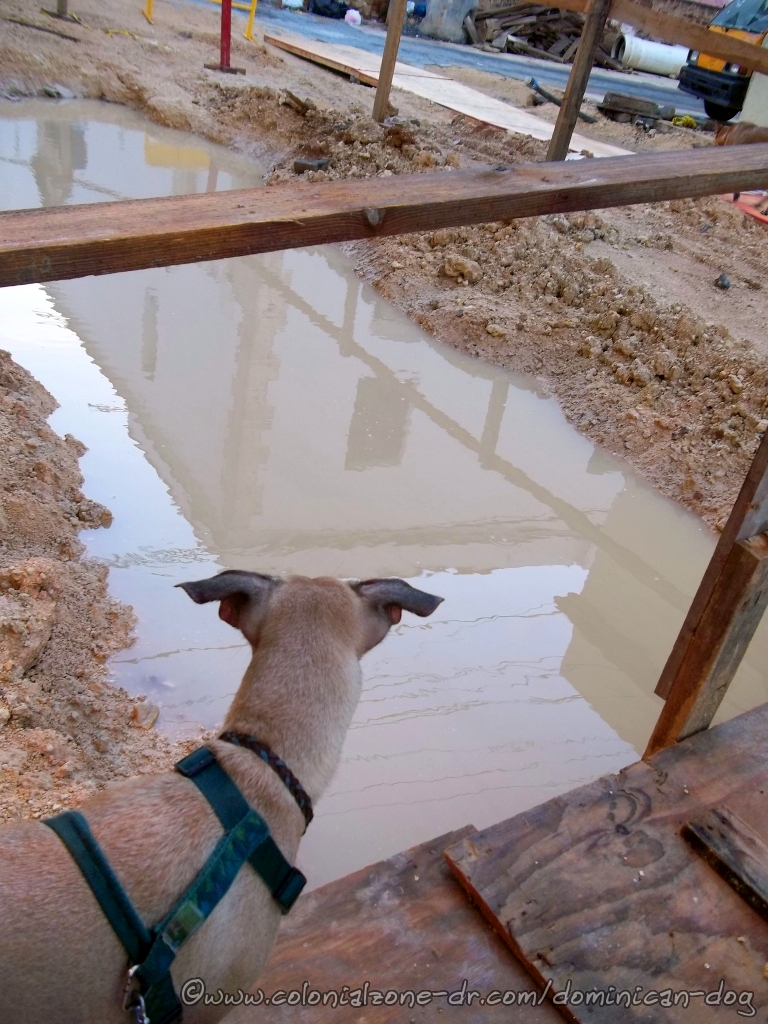 Teli checking the water under the bridge at Calle Padre Billini.

Finally she just jumped in! This is so unlike her to take a swim. I never saw her enter water on her own to swim. She will walk in the sea but never take the plunge. I can carry her into water and she will swim right back to shore. So her jumping in this water was something new. She just jumped in! I am still shocked that she did it even after I watched her do it.

Teli swam to the edge, climbed out, shook herself off and came back to the bridge. She just acted like it was nothing and that was that. 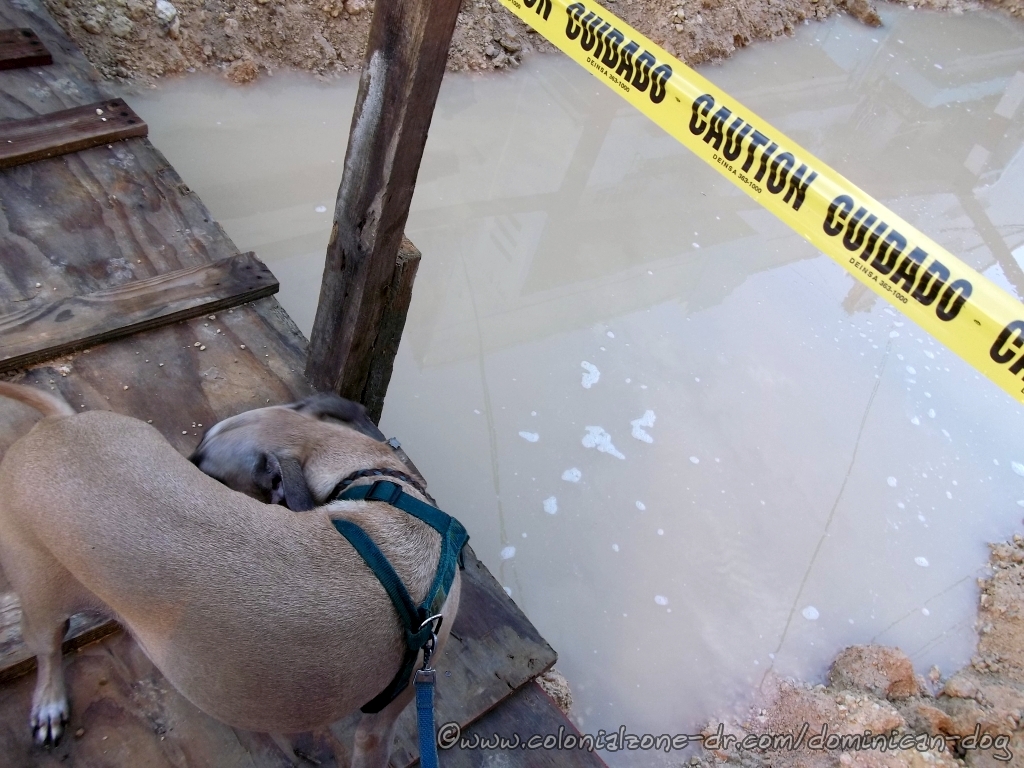 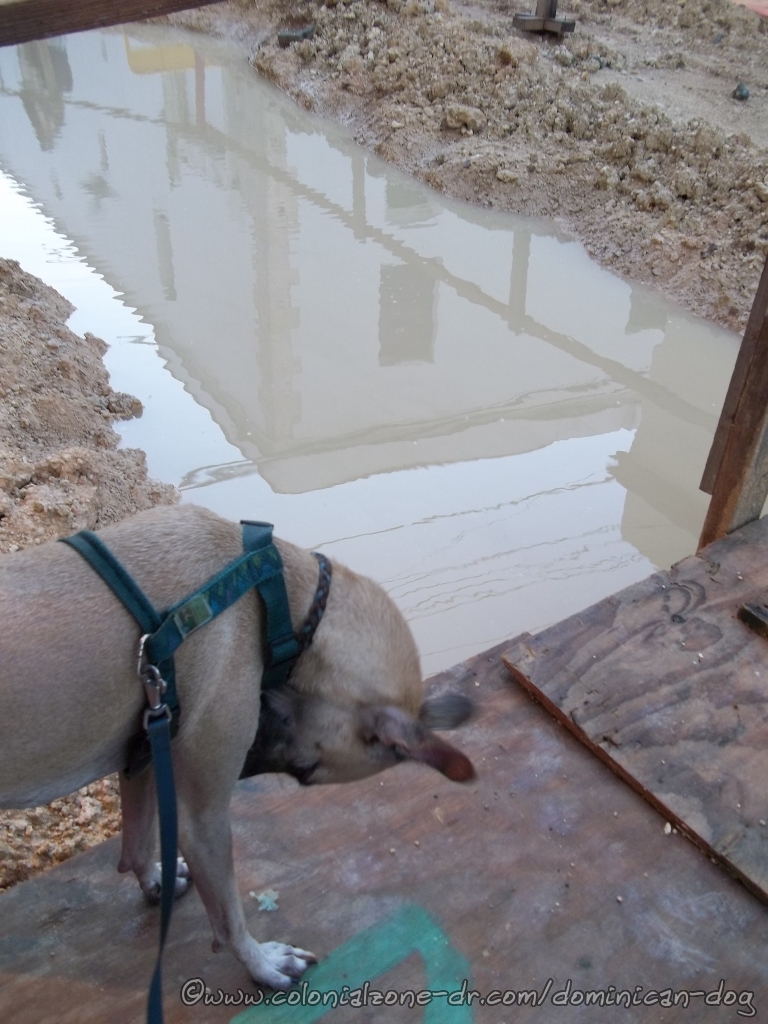 Cleaning up after the swim.

While Teli was cleaning up after her dive Zippy had to jump in also but from the side, not from the mean frightening bridge. Zippy swam to the far end of the water and got out.

Teli had enough of the morning walk and we went inside for breakfast and Teli’s bath.

The start of this holiday, so far, has been great!