I decided to take a long-time-no-have Walk-About on Sunday. It has been a while since I did a real walkabout. I spent the week before being sick with the gripe and 2 entire days in bed. Saturday I had a short tour and it made me want to get out for a walk. I was feeling better Sunday so I decided I needed to get out and see the world a bit.

I was not sure where to go so I got Teli and Buenagente and we headed out. Buenagente, a dog that lives in the streets, has been staying with me for a while, sort of a foster dog. He needs a forever home as I just cannot have 2 dogs in my small studio apartment. No space. No money. But, Buengente is so sweet and loving its so easy to fall in love with him. If I had the space and cash I would keep him. But he needs a larger place to live as he is not a small dog.

I have even been working with him to train him so when he does find his forever home he will make a wonderful addition to some loving family. I just hope he gets a home in the Colonial Zone where he can come and visit. He loves the Zone and he is a great tour guide too..lol. (more information about adopting Buenagente on The Dominican Dog Blog – Adopt Me – My name is Buenagente)

We first headed up Isabel la Catolica, which is always a fight with Teli. She always likes to go the same direction, to the same places. So after a little battle we were off.

We walked up and down some streets and ended up at Plaza Maria Sanchez. 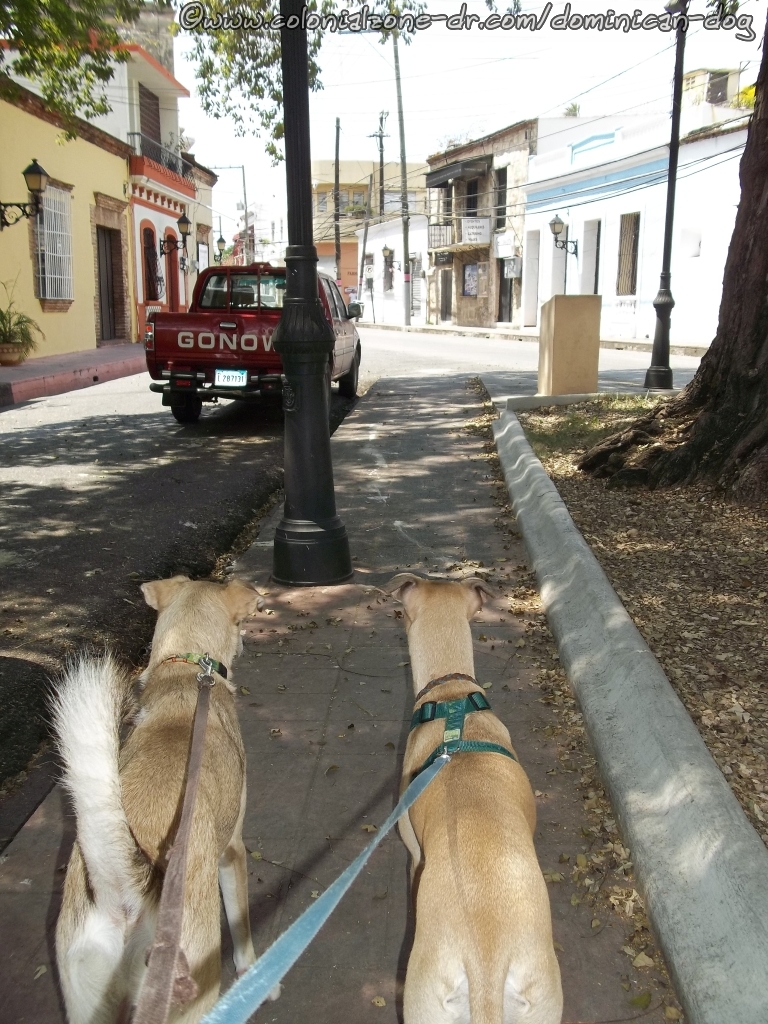 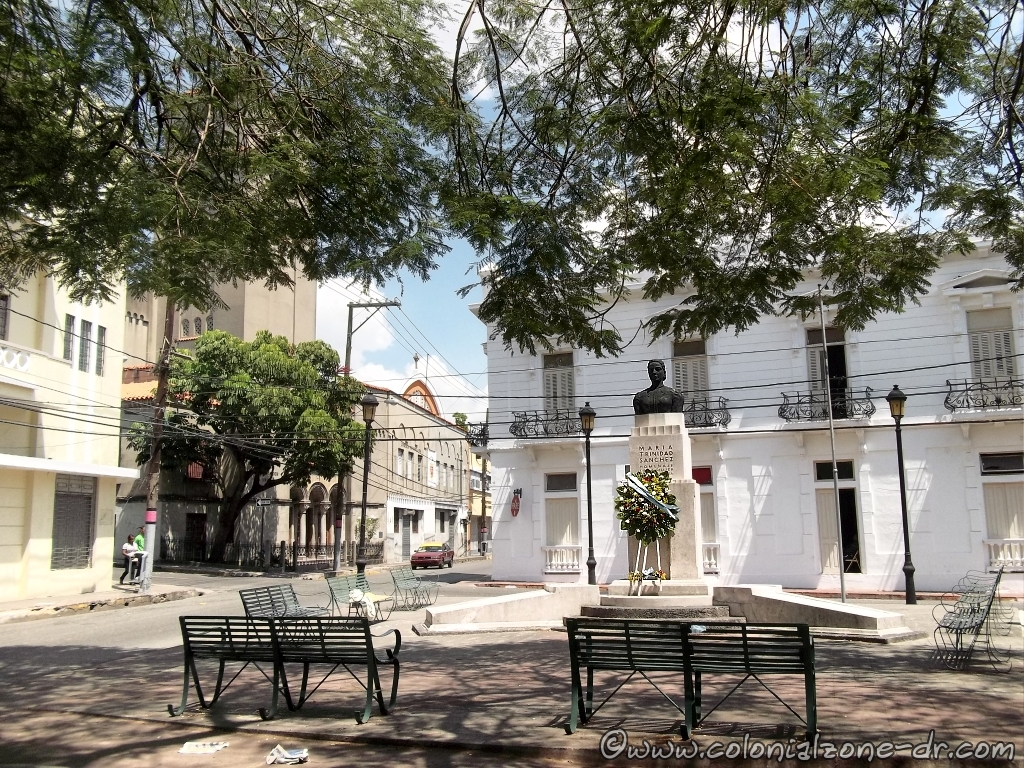 We continued down Calle Mercedes. I never went on a Walk-About with the 2 dogs before. People would walk way around us like the dogs were vicious evil creatures. But then I probably would have swerved to get out of the way if I saw the 2 big dogs on leashes walking down the street.

I wanted to head up to San Carlos but Teli would not hear of it. She made a quick enter to a little sweet shop and sat her butt right down in the doorway. She would not move. The people in the store were laughing at her while Buenagente decided he might as well take advantage and he laid in the entrance as well. 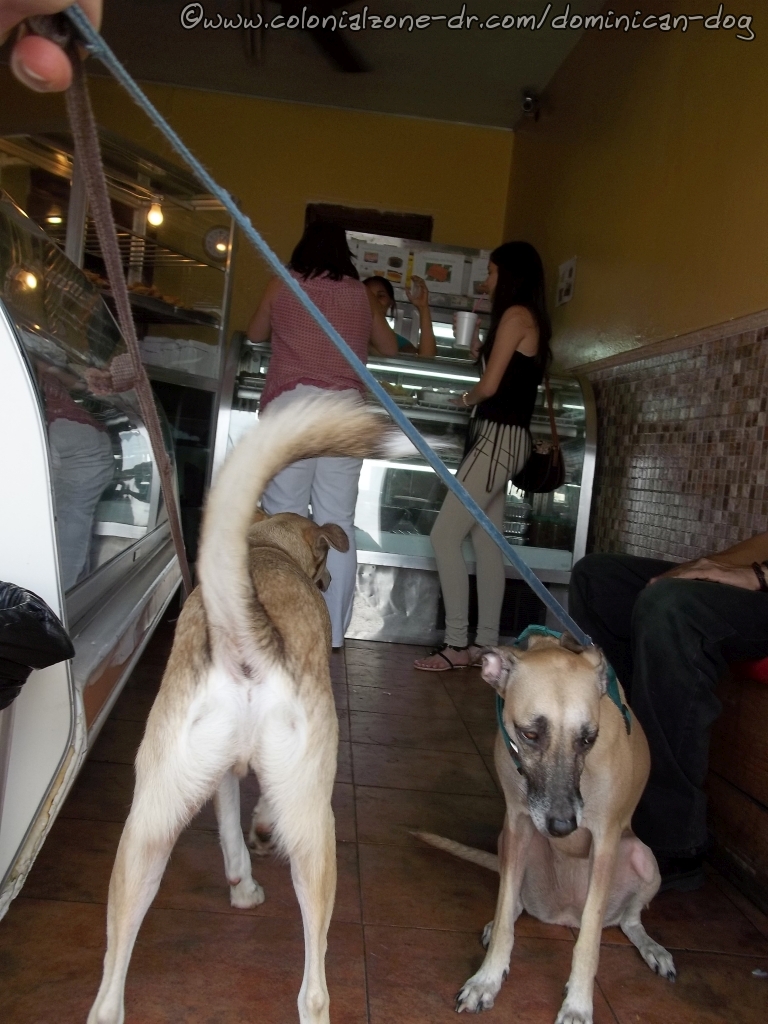 Teli and Buenagente take a break at a pastry shop.

I finally got Teli moving again and continued down Mercedes as it was just to difficult to get Teli to go up the hill towards San Carlos.

We stopped to get some shade at the Iglesia and Convento de las Mercedes/ Church and Convent of Our Lady of Mercy. The kids were checking things out there as the people sitting around were watching intently making sure the dogs did not eat them. 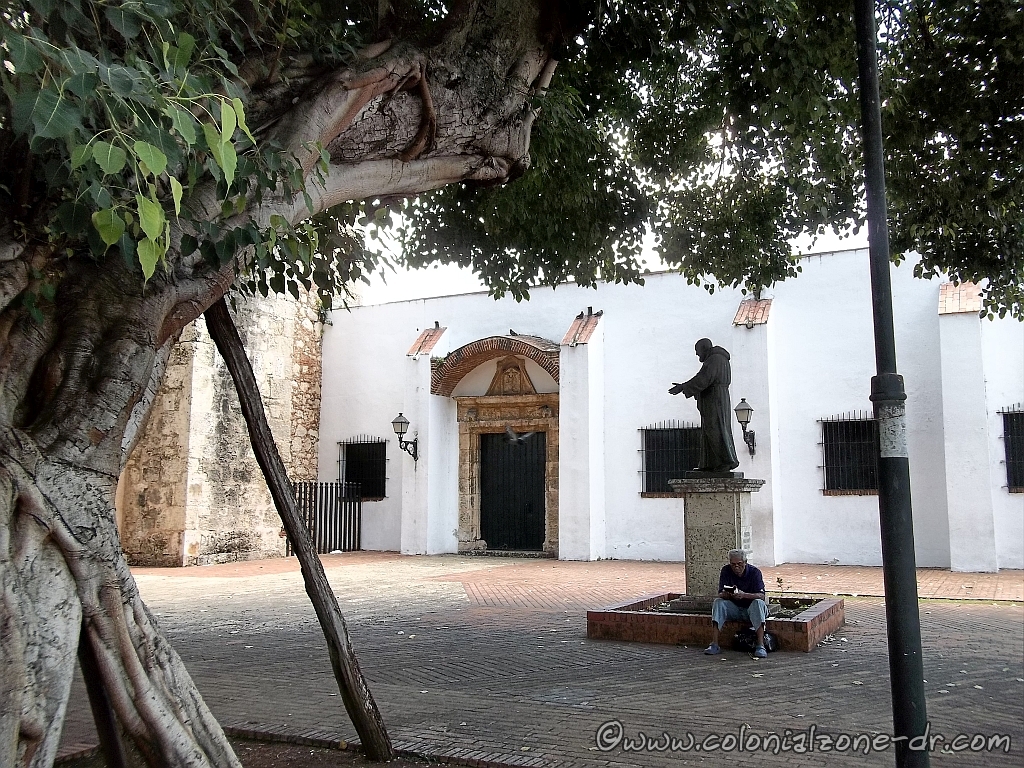 Man reading bible looking over his glasses watching us under the shade tree. 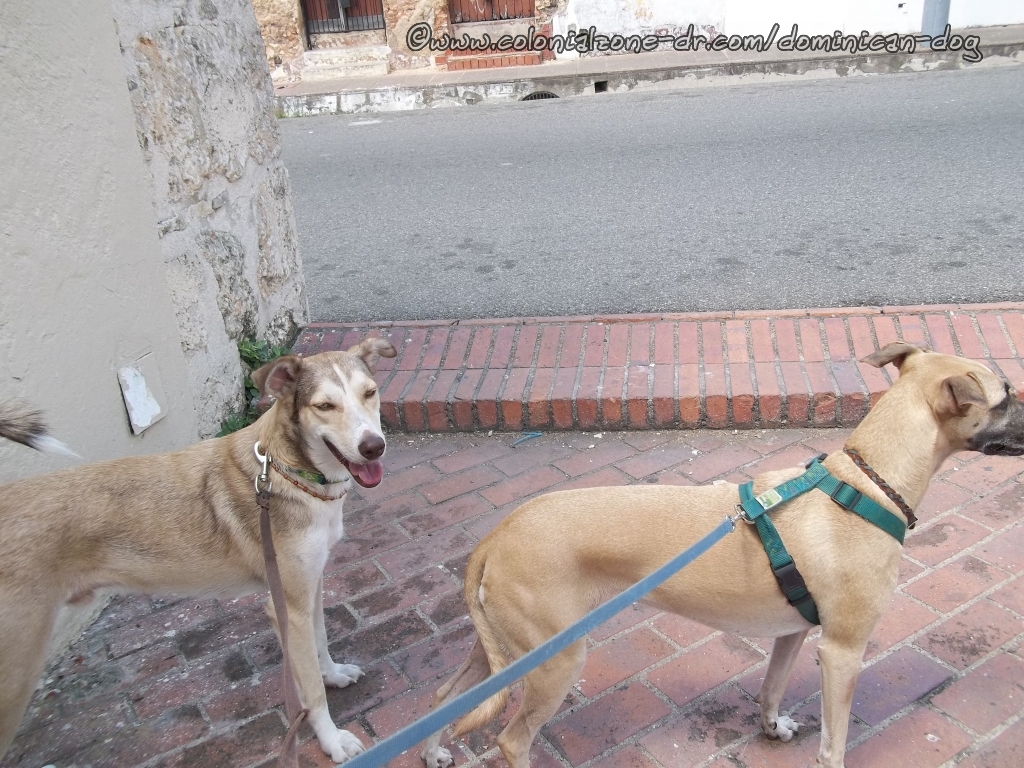 Teli and Buenagente taking a breather.

Buenagente walked so good on the leash. Teli had to pull on every corner, putting up a fight not to walk further away from home. But I was not giving in even thought at this point I was really ready to head home because it was hotter than I thought. So we headed back towards more familiar territory for Teli.

We were thirsty so decided to stop for a water break at a Colmado. 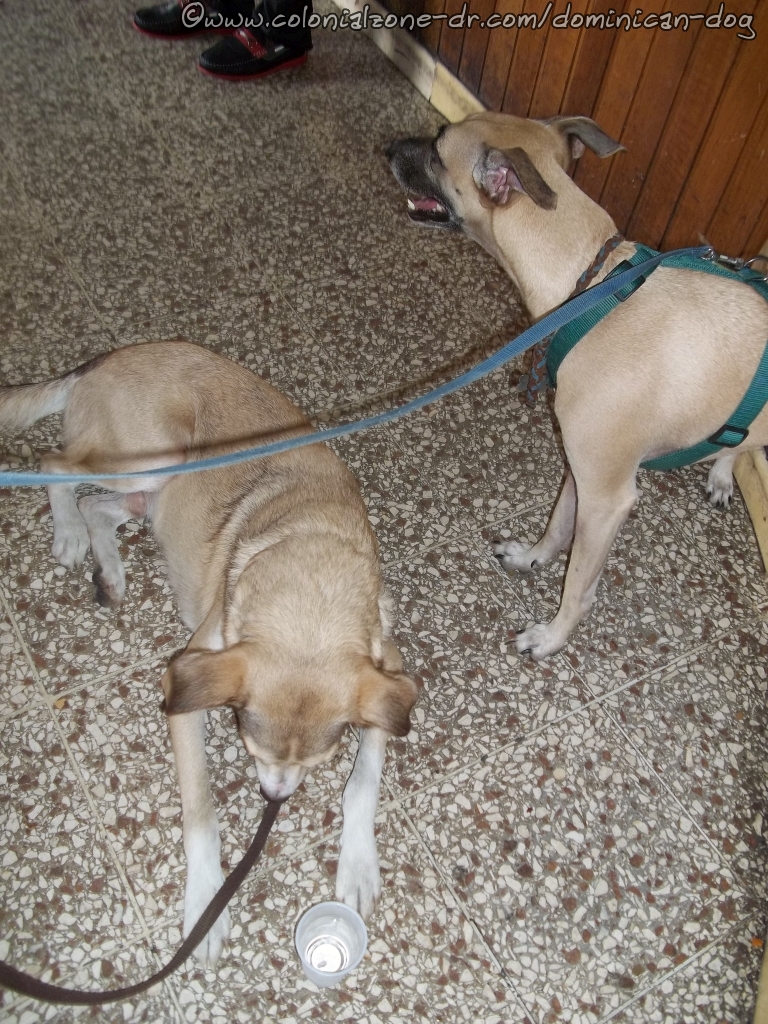 Taking a water break at the Colmado

It just amazes me the way people stare at the dogs even doing a simple thing like taking a drink of water out of a plastic cup. It makes me laugh the fuss people make. Many people did get their nerve up and come to pet the dogs. Teli is not really friendly. She is not mean, she just does not care about paying attention to other humans. But, Buenagente is just the opposite. He loves the attention. He likes to put his paws on people. Usually he reaches to their shoulders then he tries to give them a kiss. He loves everyone, especially when he is on the leash and I tell him that the person is OK.

After the water break we continued on our way. I got the idea to go to the newly remodeled park, Parque Eugenio María de Hostos in Ciudad Nueva, and check it out.

On the way a few dogs tried attacking us but they decided better after Buenagente barked. But it was a good walk with Teli trying to enter every Colmado we passed and even one home that had the front door open.

We did stop and got another water just before the Plaza and off we headed.

Thank goodness the kids are not big into getting wet because the reflecting pool in the center of the park did look inviting. I bet if I was a dog I sure would have tried taking a dip. I was almost ready to do it being a human but I contained myself. I had to set an example for the kids. 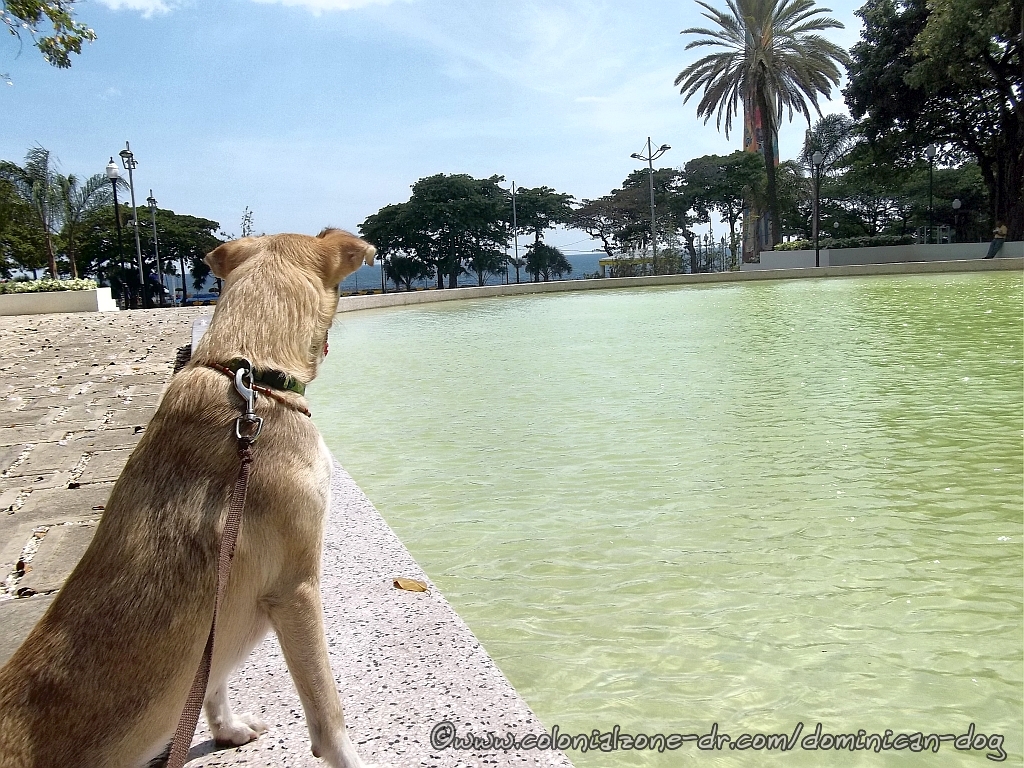 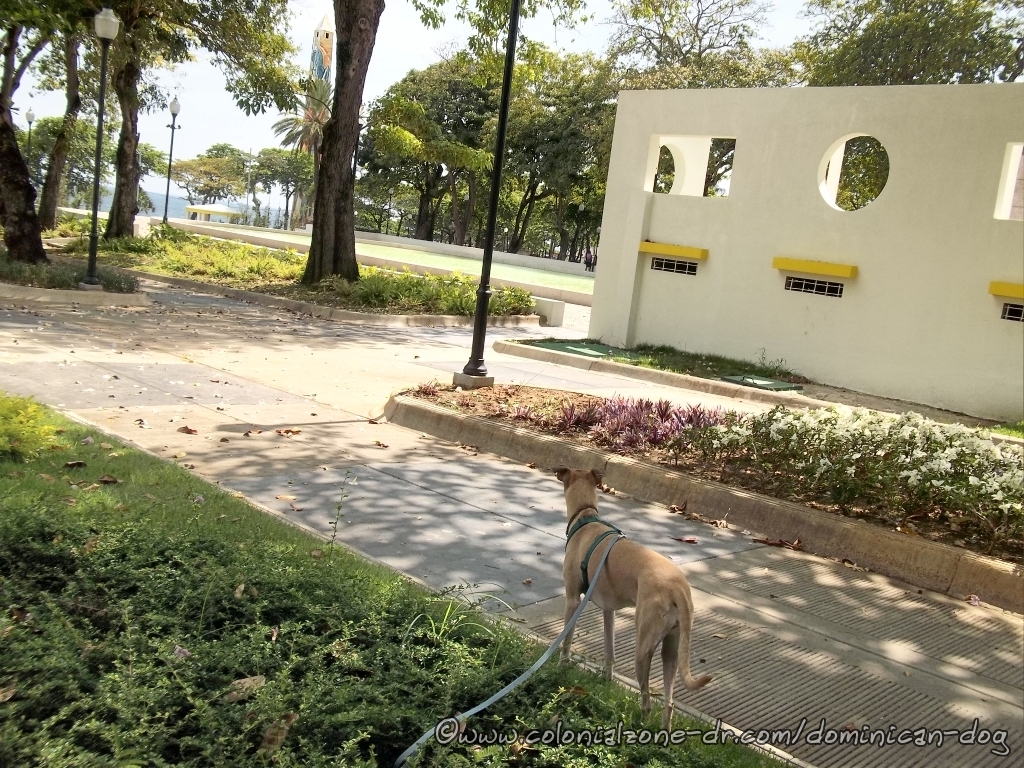 Teli was doing her reflecting in the shade. 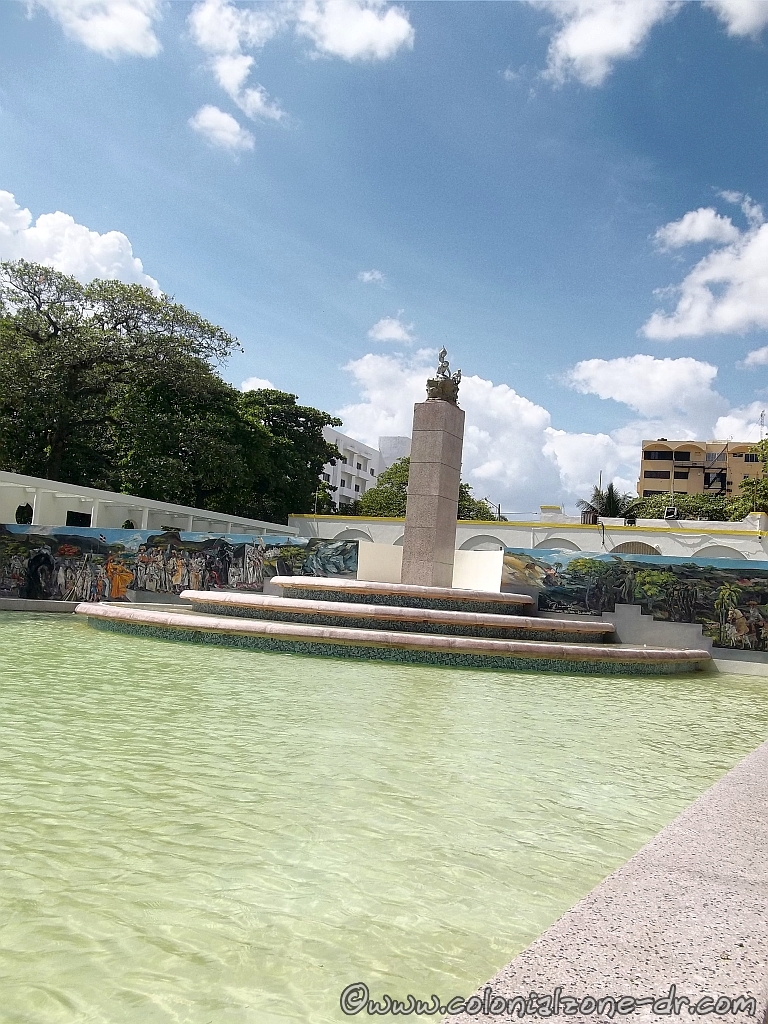 I sat by the pool for a few minutes but it was just too hot and I was feeling the gripe weakness a bit so I decided to go and lay down in the grassy area for a bit and do a bit of reflecting with the dogs by my side and my eyes closed. Living in the city being able to lay on grass just does not happen often. 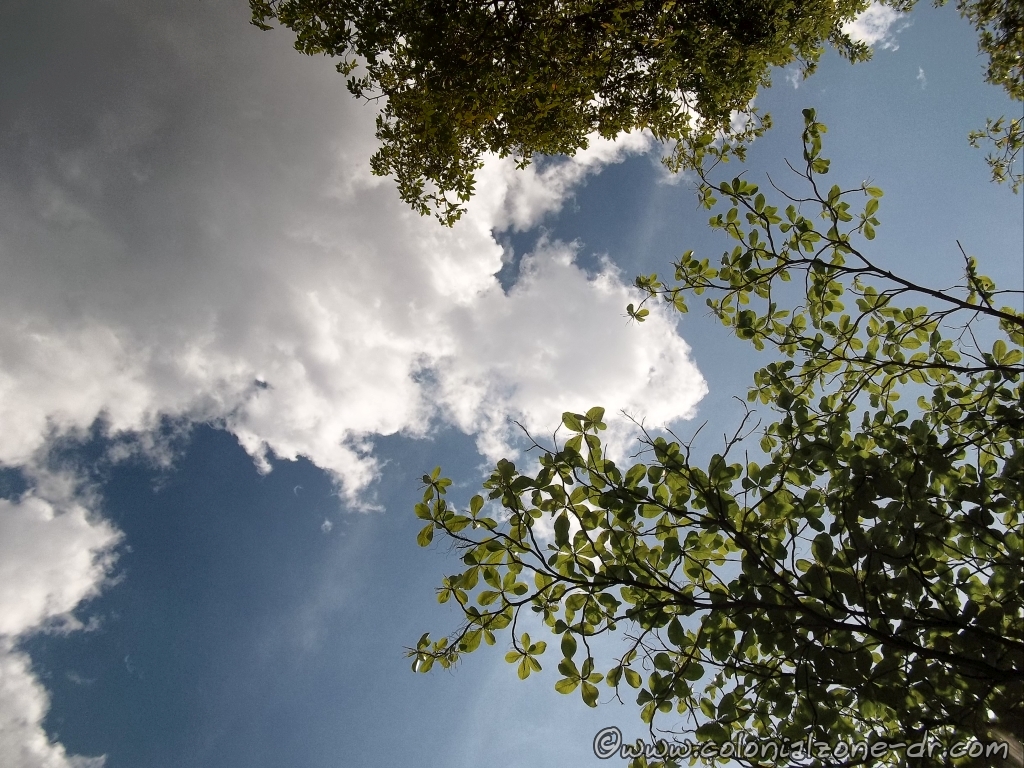 Looking at the sky

Teli only laid down beside me for a minute or two. She mostly stood over me watching, sitting for a little bit, then standing again. 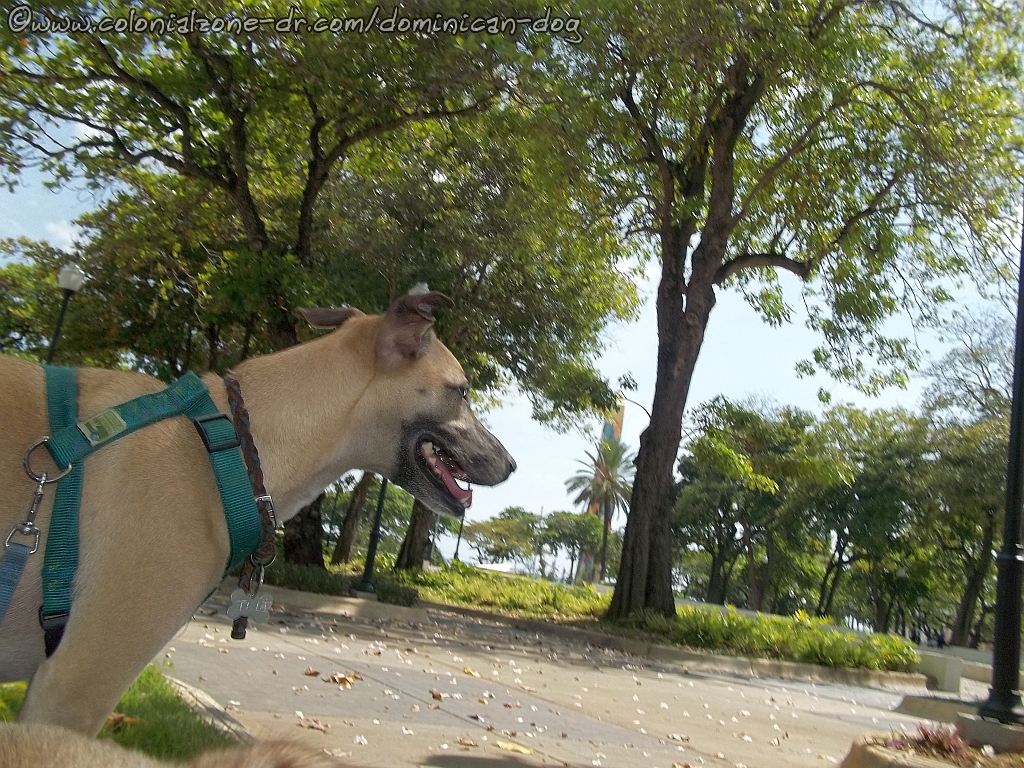 Buenagente is much more relaxed and he plopped down beside me taking advantage or our little resting time. 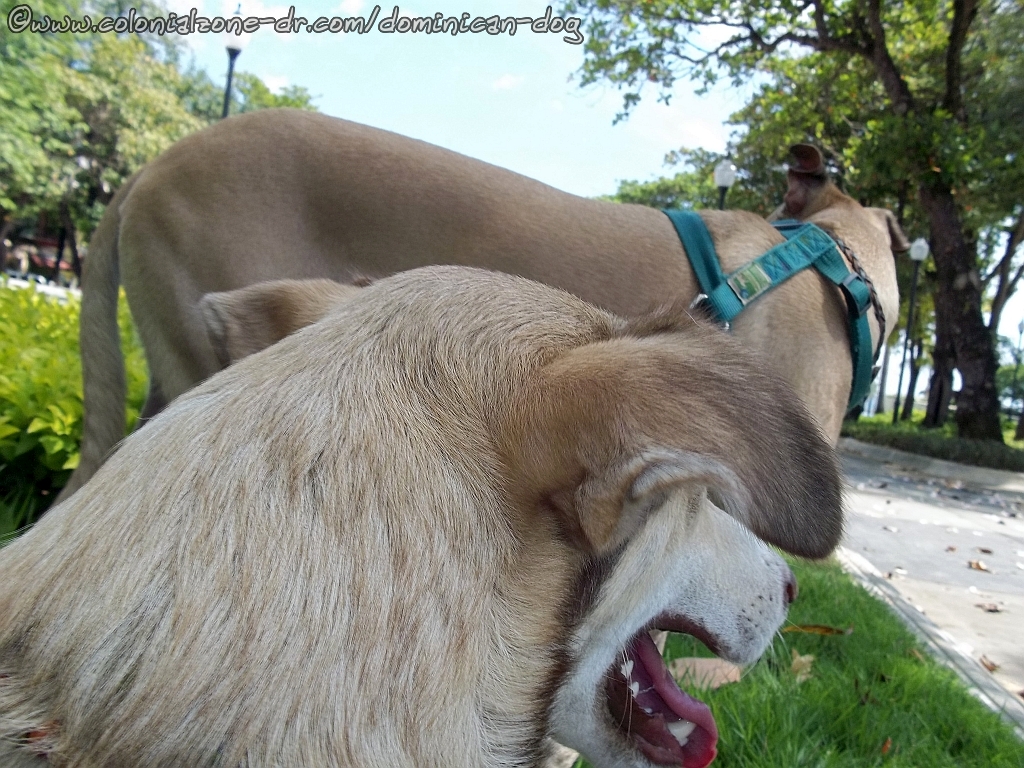 The kids watching while I rested

Sometimes I just do not know what Buenagente is thinking. I mostly know how to read Teli and her thoughts. Buenagente gave me this over-the-shoulder look and then proceeded to roll right over on my head just after I took this picture. 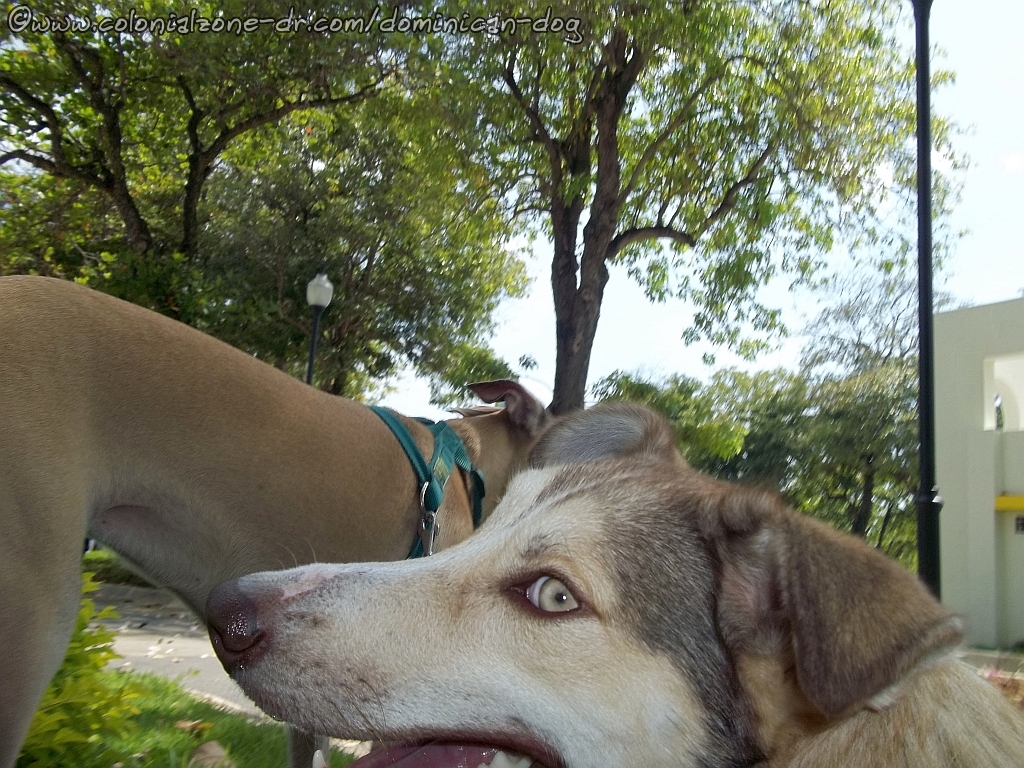 Buena thought he was being funny after I was laughing. 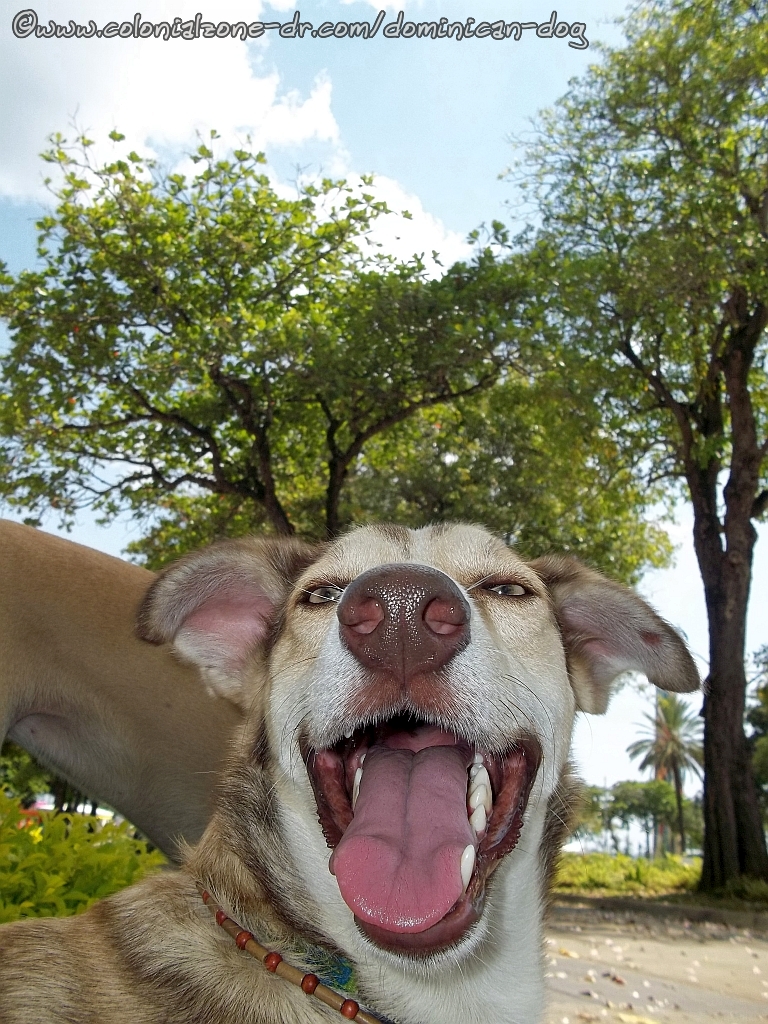 Teli paid all no mind and just kept checking out the area. 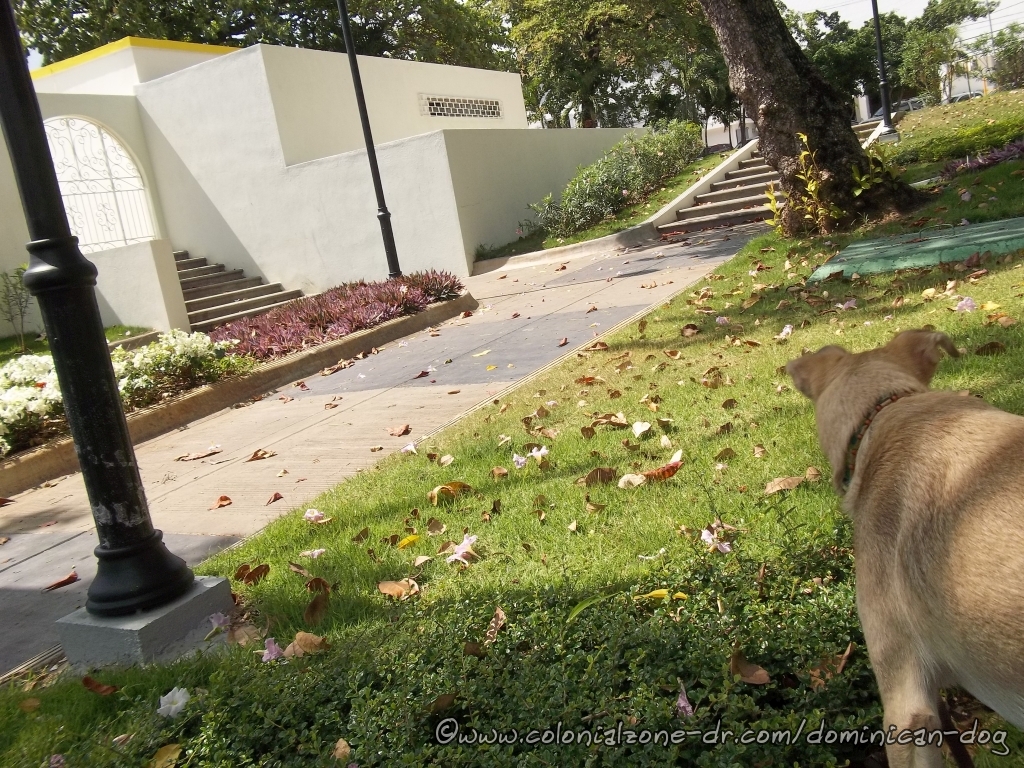 She will always be a nervous girl. She is more relaxed than when I first got her, she does not shake anymore, but she just never seems to relax completely unless she is at home on the sofa, the bed or in her special hiding spot under the bedside table. While Buenagente can sleep anywhere, Teli always keeps an eye open.

After about 1/2 hour we headed back to the Colonial Zone, passing under the Puerta Misericordia, and back towards home. 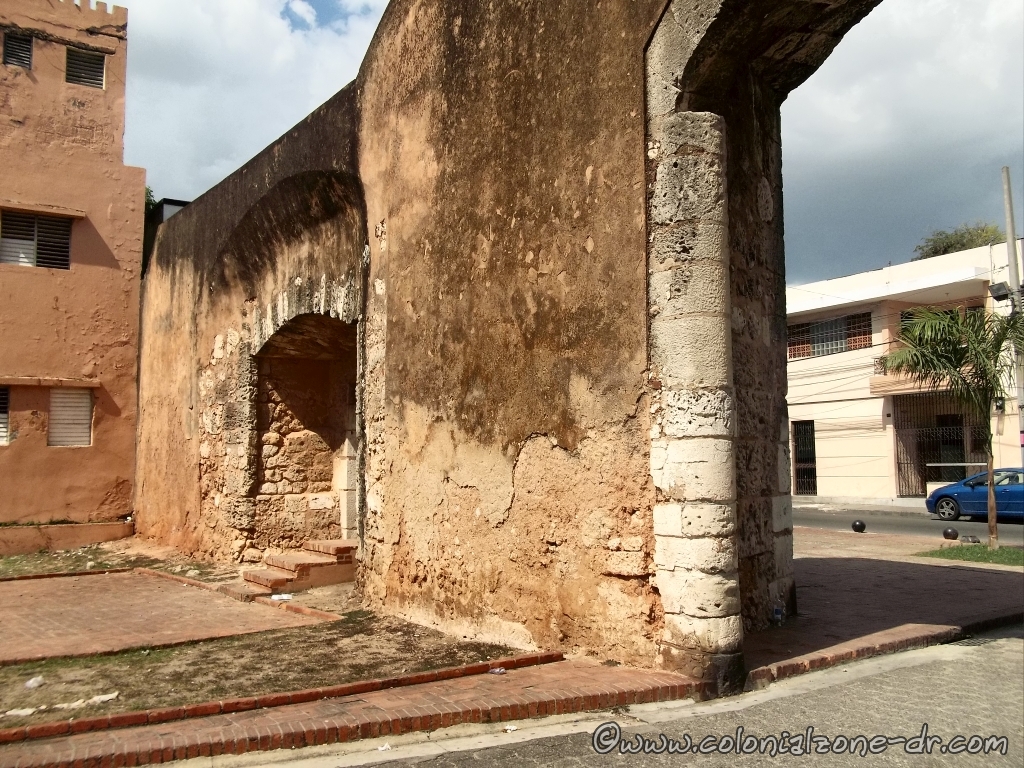 Our 3 1/2 hour Walk-About was good. The kids were on the bed before I could even get in the door of the apartment. As soon as I got me a refreshing cool shower I was right there joining them to rest my ole bod.