Teli and I went out to the Mercado Modelo outdoor market early this Sunday morning to get our veggies and other goodies. I so much have wanted all these years to buy a fresh chicken to roast. I just never had the guts after seeing the living chickens right next to the dead carcasses. Well, today I finally did it. I got a whole chicken to bring home to roast with some rosemary, potatoes and carrots.

Walking up to the market I did not even need to look around for the section that sells meat. All you have to do is look for the herd of street dogs laying in wait for a meaty, bony, fleshy morsel to get close enough for them to do a grab and run. They were a bit aggressive when Teli came walking into their territory but she pays them no mind and they just bark a bit and strut around then ignore her.

I found the chicken man. I told him I wanted a smaller chicken. He asked me if I wanted it chopped up and I said no that I wanted it whole. 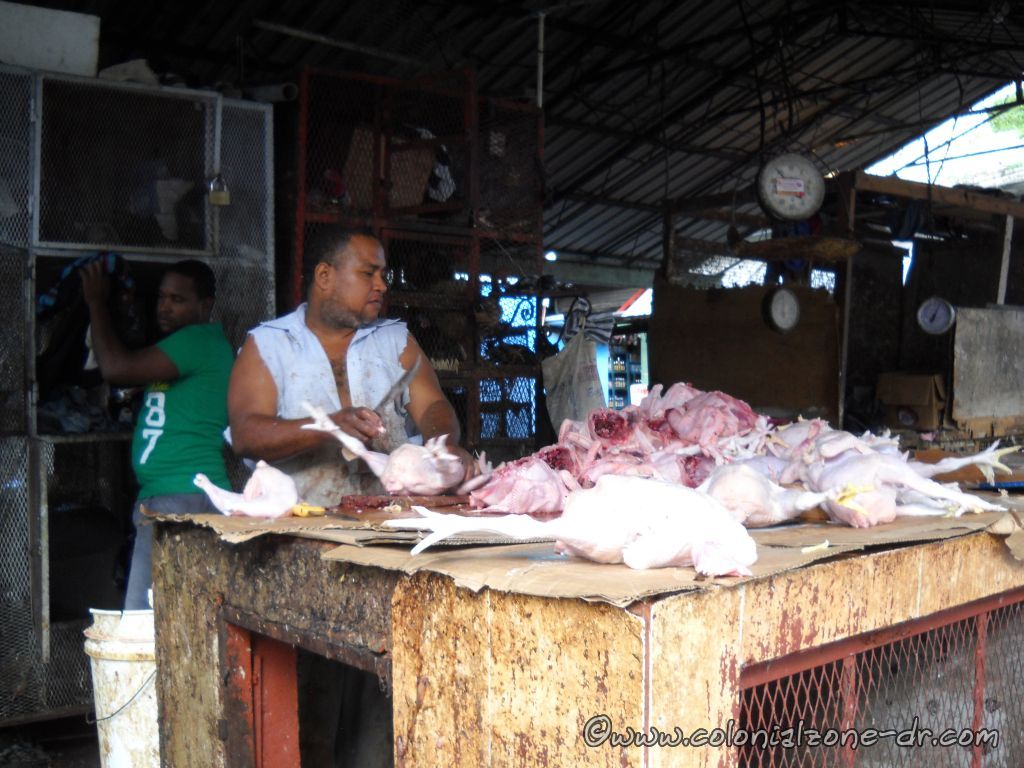 Picking out a chicken for Teli and I 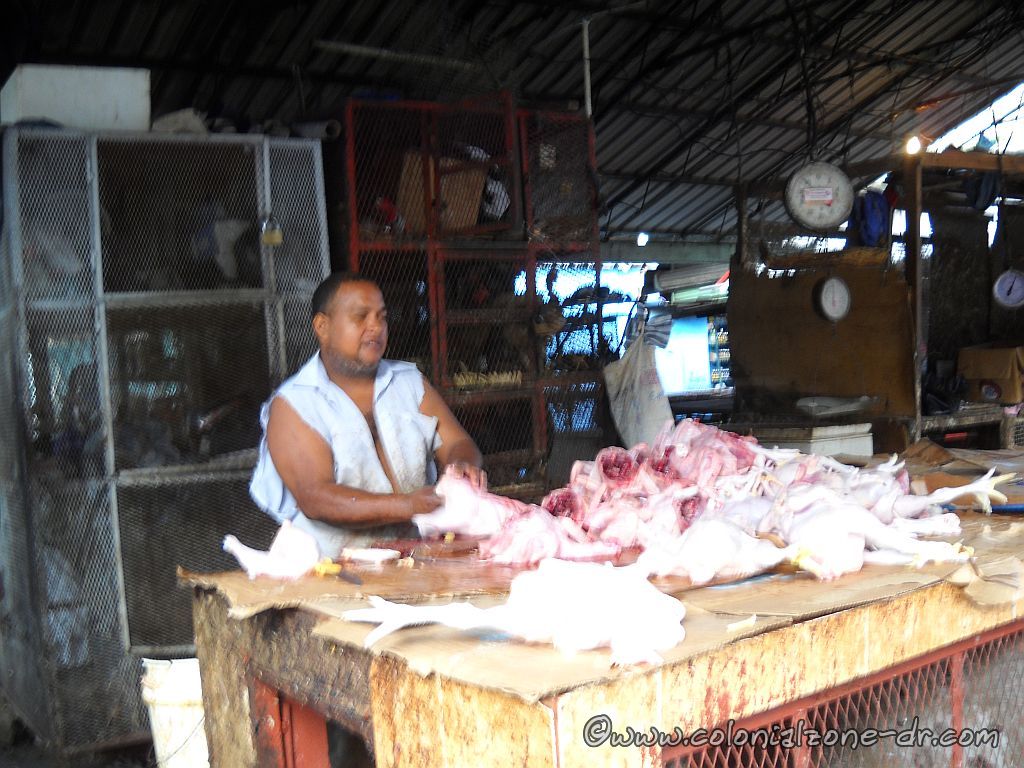 My very own perfectly selected bird.

While he was digging around in the bodies of the birds (note that even he was making a yucky face while his hand was inside that bird) I had to go and take a look at the chickens-in-waiting. I felt so bad for them all stuffed into the little box waiting for the chopping block. 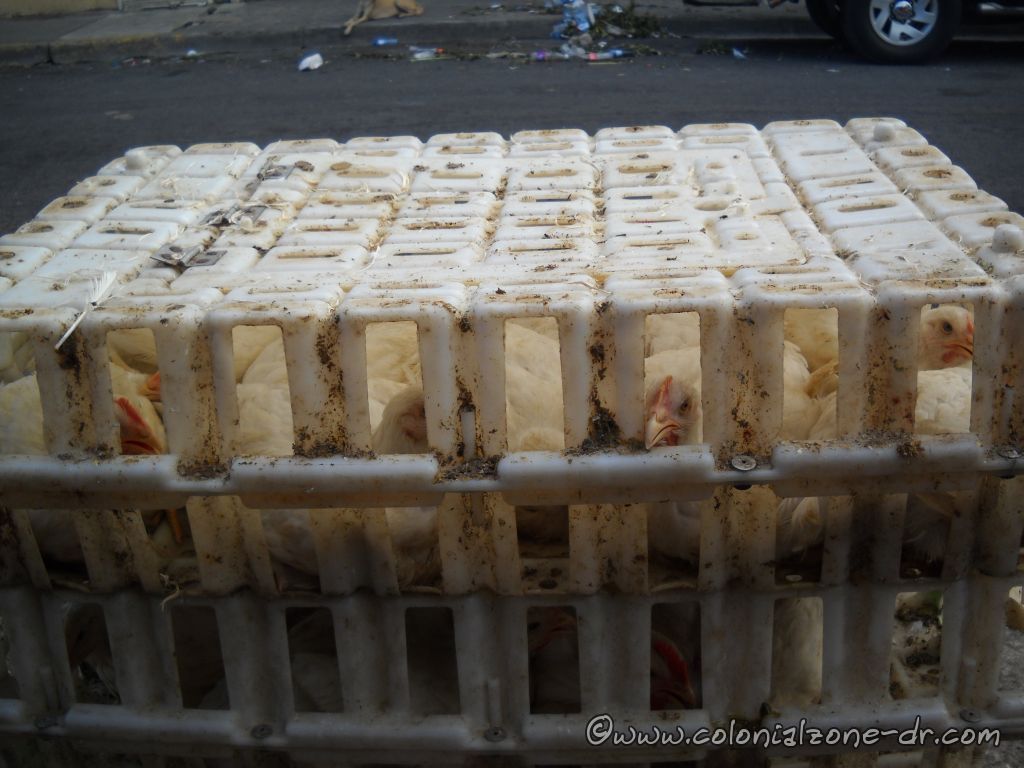 He picked out the perfect chicken for me, or so I thought, and I put it into my bag and paid the guy. We talked a little bit about Teli and we went off to get some veggies.

I got home and wanted to get the chicken all stuffed up under the skin with the herbs, spices and some butter.

I opened the bag and put the poor dead chicken into the sink. I cut off the neck (I had the guy cut off the head as I did not want to deal with that) and the feet. All good. Then I went to reach inside to get the giblet bag. This is when reality hit me in the head and stomach. Giblet bag, too funny.

The opening to the body cavity was filled with what looked like the liver. Put my hand in which is a bit gross anyhow and realized that this was not a bag of innards but the innards themselves still stuck to the body cavity! I was horrified! I was saying “oh no no no”..”oh my goodness” over and over, like it would help me to get that nasty flesh outta there. My hands were shaking too. I put my hand into the bird just a little and pulled. Blood came out! I was “Oh my goodness-ing” and “Oh my-ing” like crazy. Standing on tippy toes like that was going to get me farther away from the carnage. 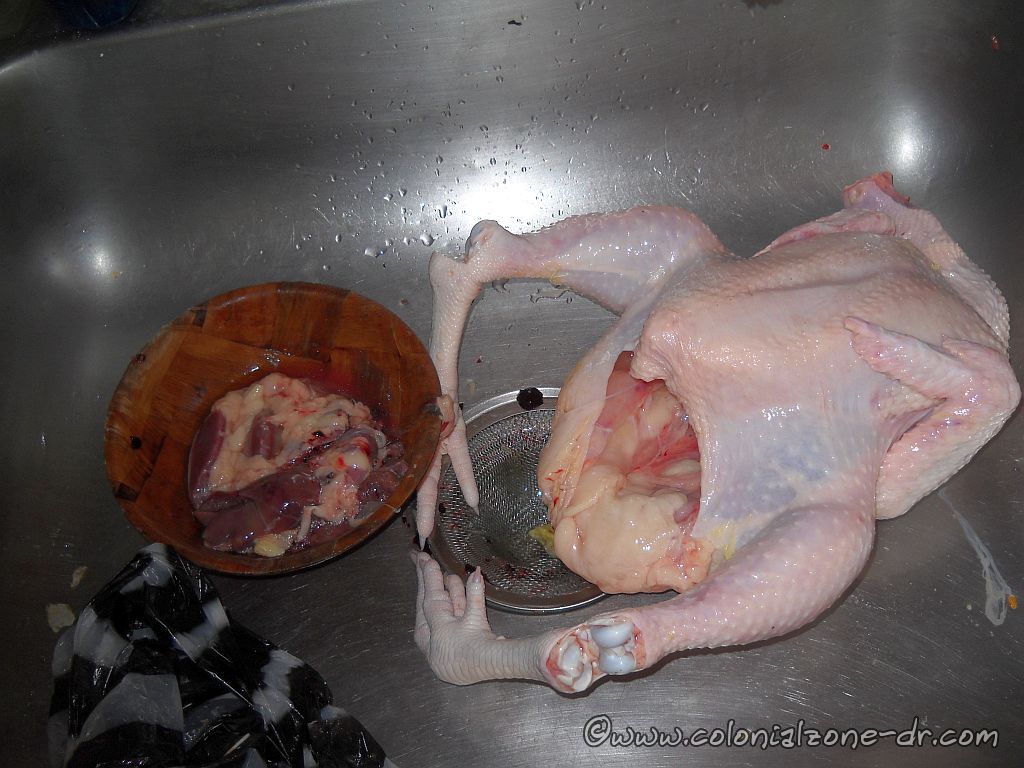 Cleaning out the raw chicken in my sink

I figured I just had to do it. I reached right inside that baby with real determination. There were blood clot thingys coming out. Then I was really sick! It was still warm in there. I could just imaging feeling the heart of the poor bird still beating as I unmercifully ripped it from the body. I was really oh no-ing and my goodness-ing by this time while my hands were shaking all the while laughing nervously out loud.

Teli was sitting at the kitchen entrance just staring at me probably wondering what was going on.

I was so close to just throwing the poor dead thing away and trying to erase the carnage from my mind. But I had to do it. This was a challenge I had to do. I waited for 11 years to buy this chicken and my goodness I was going to do this thing no matter how sick I was and how much my hands shook.

I kept the water running as I ripped, tore and washed that raw flesh clean. I was feeling a but queasy in the tummy. But I did it. Right away I took the nasty stuff I removed to the street to put in the garbage. Out of sight – out of mind I was hoping. The taxi and money changer guys were out in the street. I told them about my chicken while making a yucky face and shaking my hands. They got a good laugh at my expense.

So I boiled the giblets, feet and neck and roasted that poor bird in the oven. I do not want to think about that just a few hours earlier it was a living-breathing creature. But as I eat its succulent flesh roasted to perfection I could not help but think of that. 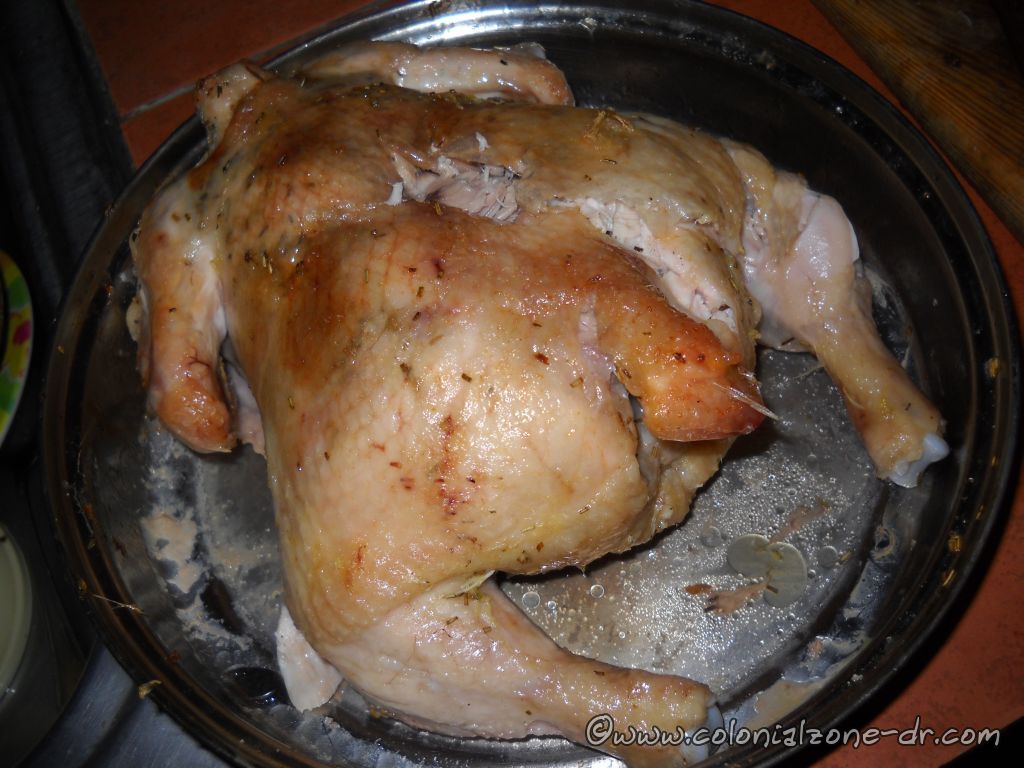 The finished chicken all cooked and ready to devour

(I almost forgot to take a picture)

Will I buy another fresh chicken? Yes, how that I had my first I can do it again.

Will I ask the guy to take out the innards before taking my chicken home? Yes, I sure will. I do not want to be pulling the still beating heart out of any creature, even if it was only my imagination that said it was beating.

Maybe I’ll get me a duck next time.