This week was a bit hellish. Sunday night I heard a gurgle coming from the toilet. I was afraid to open it thinking of the horror movies I like so much. I expected some face eating sewer monster to jump out at me. That was the start of the problem.

The next morning there was water all over the living room floor. Stinky nasty water. Black water or here auga negro. Water was gurgling up from the drain on the floor. 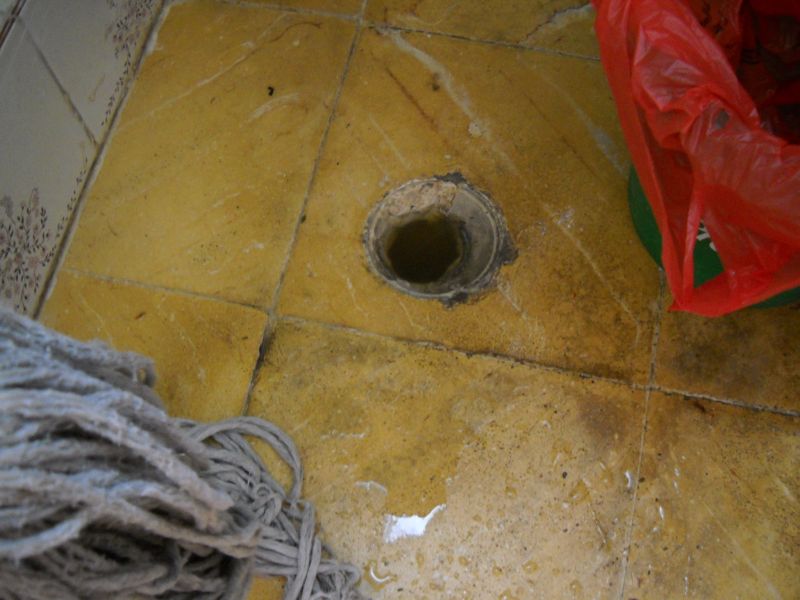 Called the office of the apartment and they said they would have someone come and see. The guy came ans said it was a problem in the street. So in the next few days I had to mop up the water. I had to take a bucket shower on the enclosed balcony. I had to dump all the water I used out the balcony drain and into the street. I had no choice. There was no place to put the water.

Finally on Thursday a bunch of men showed up ready to work. 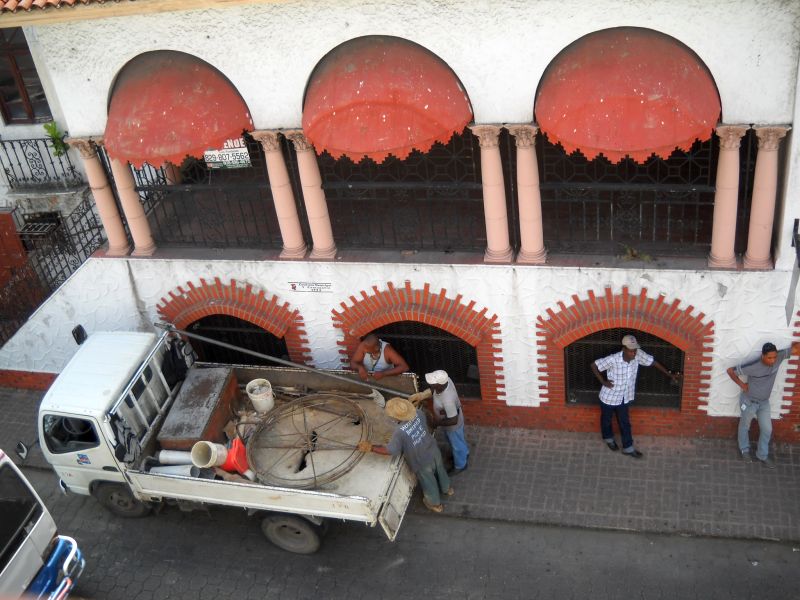 First they tried plunging and using a snake. Nothing. they were talking fast Spanish and I did not understand much plus I do not know plumbing terms so I was lost. 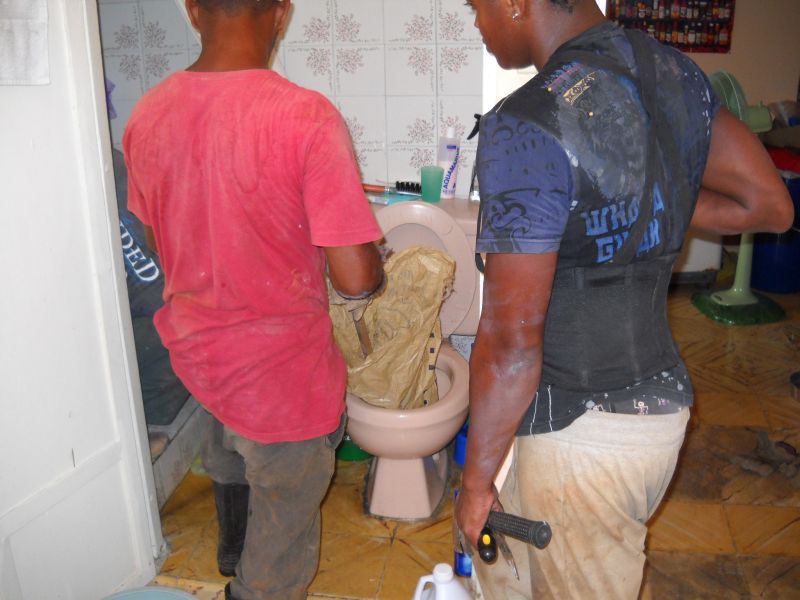 Then they decided they needed to tear up the floor. Of course they did not have their own tools. They had to use mine. Tank goodness I had what was needed to destroy my floors. They were hammering and hacking away at the tiles. Pieces of the tiles and cement was flying. All this mixed with stinky nasty poop infested waters. 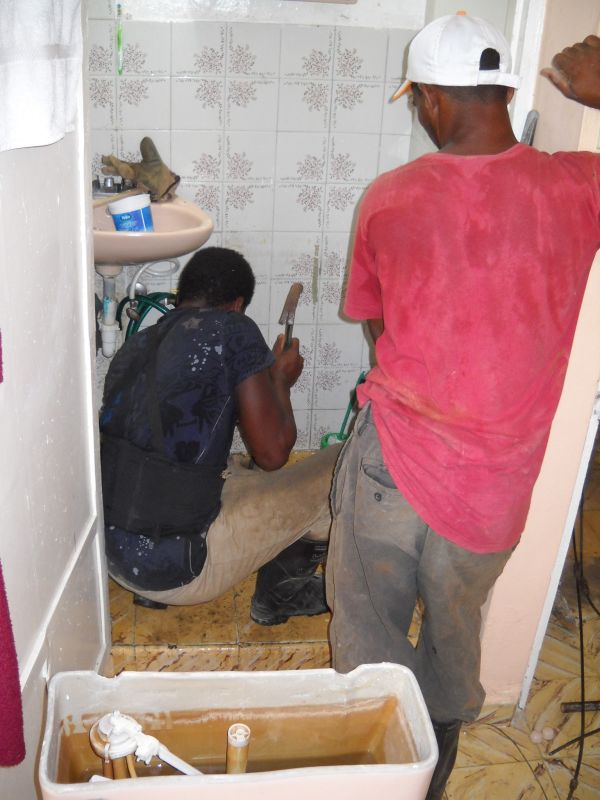 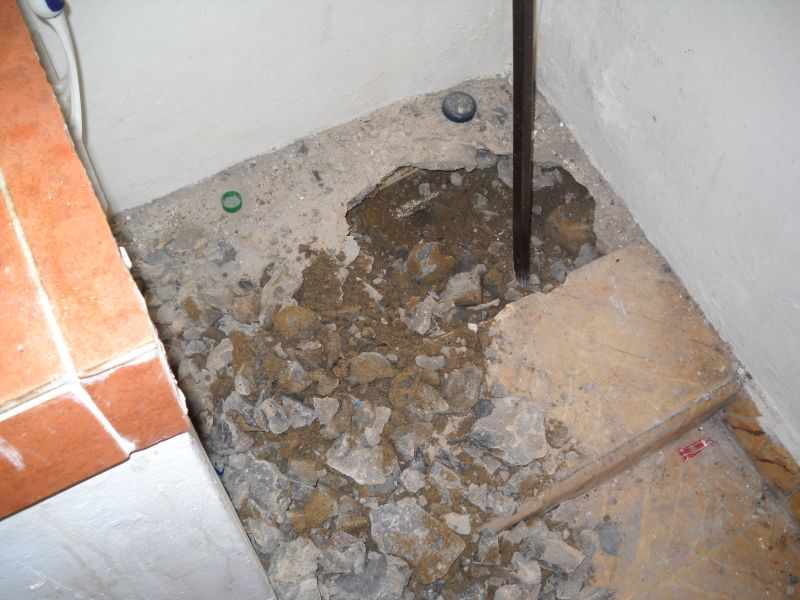 They broke the sewage pipes under the floor and it took a long time for them to finally get the snake to go through the blockage. The other 2 apartments did not have to get their floors broken but they did have to clean up alot after this fiasco.

Teli was making sure they were doing good. She was observing and watching who was coming and going. She barked any time someone went out or came in the front door. She did a good job supervising. 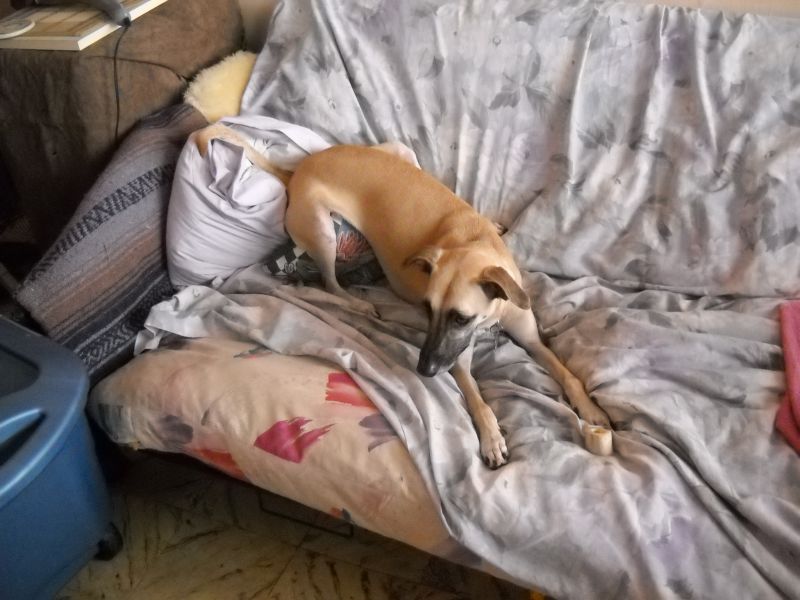 There were at the most 7 guys in this little apartment at one time. Teli and I just sat on the bed and I read the Kindle to stay out of the way. I did not want Teli tracking poop infested water onto the bed so she stayed right beside me.

When they were finishing up for the day and putting my toilet and sink back together I called the Colmado and got them a bottle of Rum. The 5 working guys were so happy. They seemed to get louder and to laugh more once they had that bottle in their hands. They deserved it working in this crap all day. I wish I could have got more for them.

This is what they left me with for the night with their promise to return and finish up. 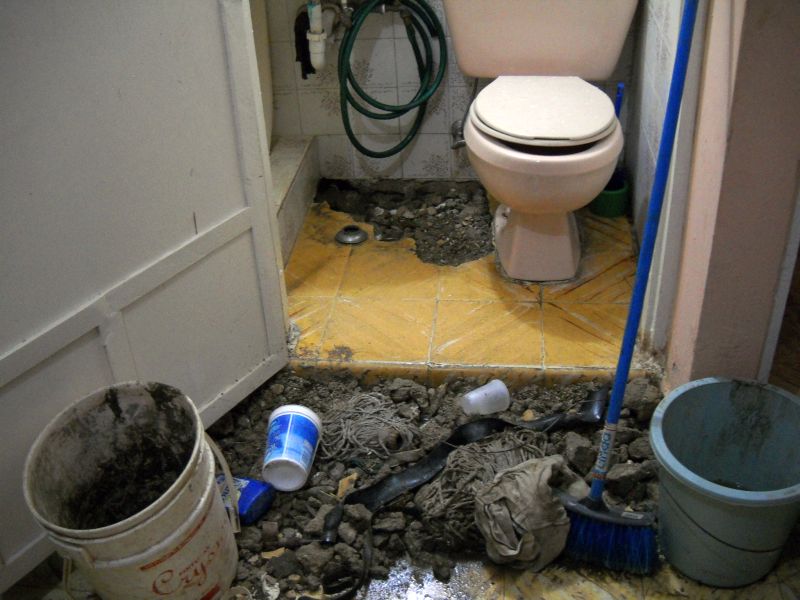 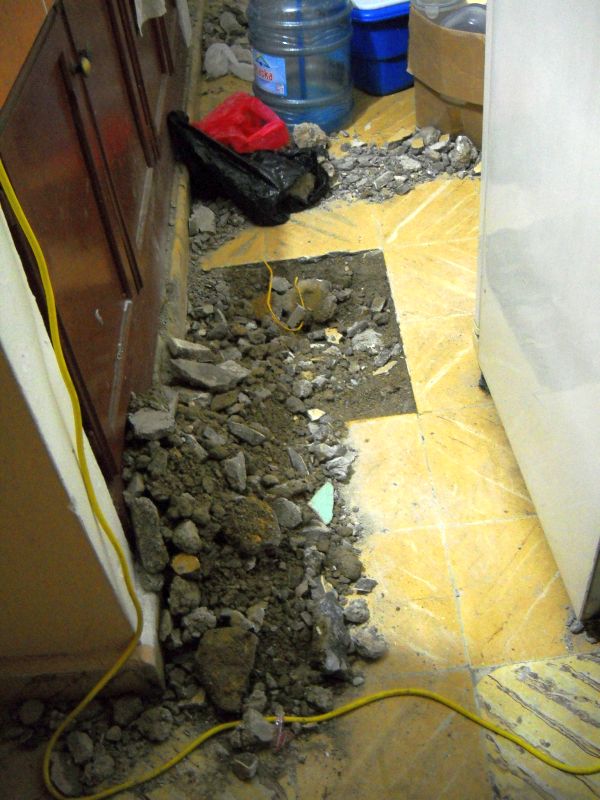 Today, Friday, the one guy returned at 9:30 in the morning. I was really happy. I was not sure when they would come. He fixed the holes. Took away all the debris. Fixed a drippy facet. 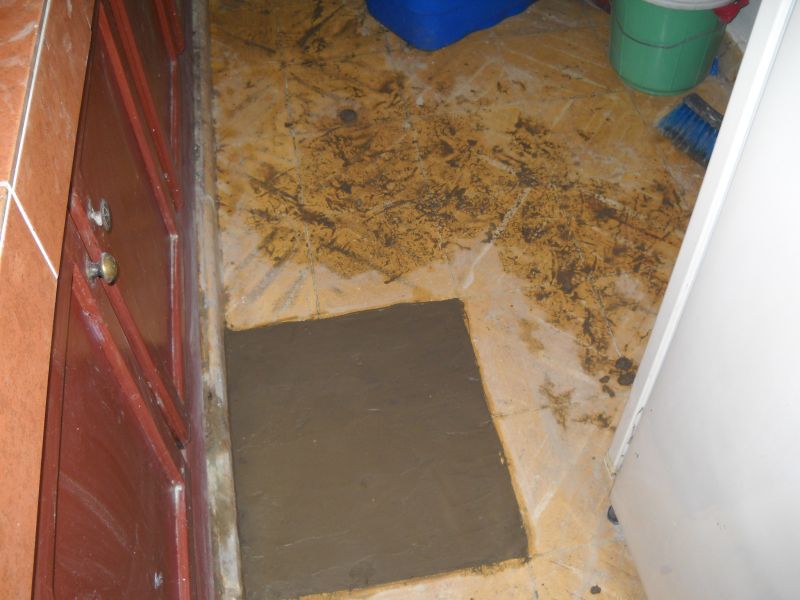 Teli, the thief, kept taking the pieces of the broken floor and putting them on the sofa and the bed. 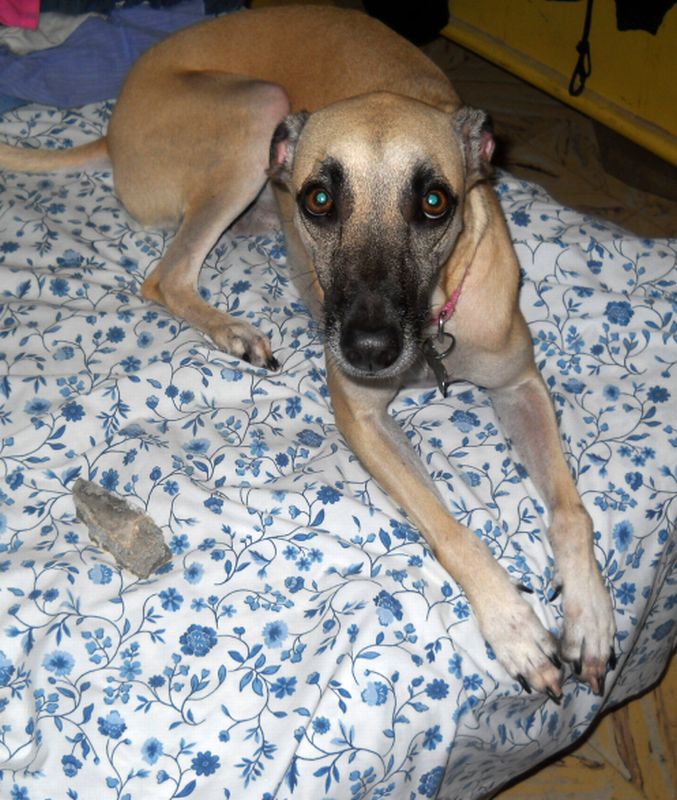 The cement is semi-dry now so they painted it to try and match the tile as best they could. It is not the most beautiful thing but it is good enough for me. They still need to return tomorrow to check it again and change one more facet. The owner of the building, whom I had never met, came to check on the work.

All in all this repair job was positive. The stench is gone. The problem is fixed. They cleaned up the mess. they returned all my tools after they washed them off. The one guy even refilled the water jug in the fridge that he emptied (I told them they could help themselves to the water).

Before they left today I showed them the pictures and then told them my big observation. I saw no plumbers cracks! I was shocked, very happy not to see a crack, but still shocked. I asked them if Dominicans do not have plumbers cracks. They knew exactly what I was saying even though I did not have the correct words. They started laughing. One guy said yes..they have that too. He said that 2 of the men that work for him have that. The other man with him was nodding and agreeing while laughing.

I can use the bathroom and let the water go down the drain without worrying about it coming back up. I can wash dishes. I can do my laundry. I can read on my throne.

Tomorrow after all dries I can put stuff back to normal. I am content. Life is good.

Update: The guys came back to replace 2 dripping connections in the bathroom. Teli greeted them like they were old friends. They did their work. I checked it. Then 3 of them were resting in the street waiting for the boss to check their work. 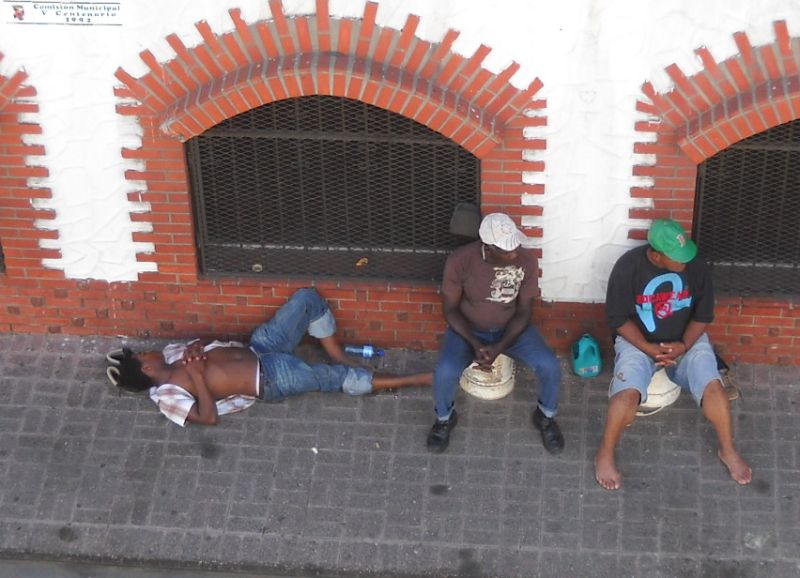