I met some friends at a little cafe in the Colonial Zone for drinks. We were just sitting outside talking and laughing with the dogs at our sides. 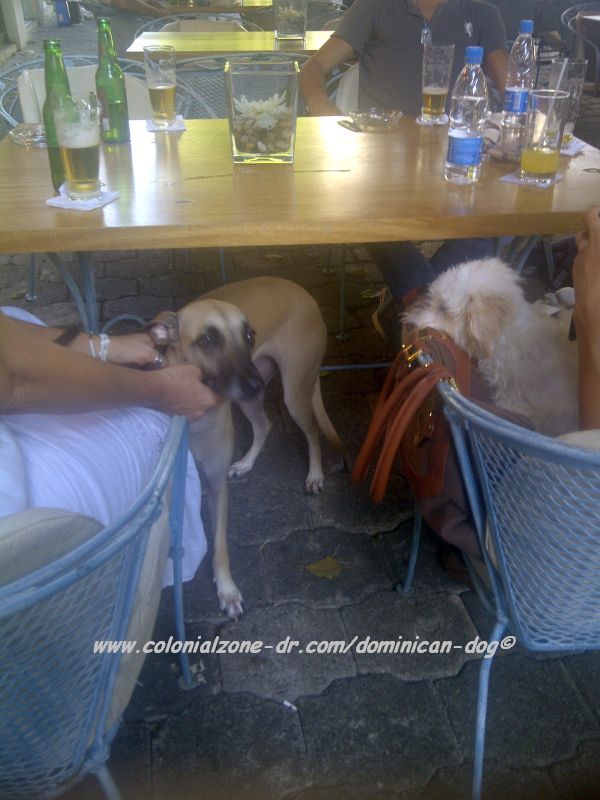 After filling up on liquids it came my turn to head to the bathroom to make room for more liquids.

Now, let me tell a little history about me. Every time I have left a group of friends to visit the facilities I get lots of thoughts in my brain. What else is there to do whilst releaving ones self in a bathroom but think, am I right? Well, my friends in USA who knew me well got used to my coming out of the bathroom with a story. All would shut up when I came back to the group waiting with bated breathe for some astounding revelation to change life as all knew it. Ok, it was never that profound but you get the idea. So on with the story.

I got the key bearer with the key to the main door to the hallway to get to the bathrooms. The mens room is first and the door was open to see 2 stalls and a sink. No one was inside. Then was the ladies room straight ahead. The door was open as well.

There was a large type body bent over the sink with the paper can blocking the complete view of the face. Well, the face connected to the bending body looked up. To my surprise there was a mans face. A black mans face covered in white. First thing I thought was why is this guy doing white-face comedy as he was really funny looking.

His entire face was covered in shaving cream. The only thing that was the original color was the lips, surrounded completely in white, and of course his eye area. His eyebrows were even covered. He must have been one hairy beast to need to shave his entire face. Well, I just started laughing as he looked so funny standing there in the ladies room, the direction I was heading.

He started saying that he would get out and was apologizing for being in there. I then pretended I was afraid. I yelled Ghost (in Spanish) and jumped and grabbed onto the key bearing waiter guy still holding the main door open. He looked like he thought I was going to be angry cause of the guy in the ladies room so I scared him when I yelled.

The white faced black man was shaking his finger apologetically saying no, no that he wasn’t a ghost (as if I really thought he was) and coming toward me. The key bearer got the little dumb joke and was laughing. I put my hands up for him to stop and said it was ok and headed for the mens room. I drew an invisible line across the doorway and told them that this is MY bathroom now and DO NOT cross the line with a little half smile.

They had a dumbfounded chuckle look on their faces as I went to the mens room to take care of business and get the story right in my head for sharing later, giggling the entire time.

When I came out I realized that there was no water in the mens room so this is why he was shaving in the ladies room. So I headed to the ladies room to wash up. The ghost was gone replaced by a young lady washing her hands looking at me with a puzzled look as I walked out of the mens room with a big smile on my face (I was still laughing about the episode). I didn’t have the words to explain the story so I just kept laughing, washed my hands and got outta there with the girl smiling quizzically behind me.

I was so excited to tell the story when I got back to the table but they were into some serious discussion so I waited then the moment passed and I never got to share my bathroom experience.

Note to self – I have to train my new friends to wait for me to come out of the bathroom with a story and to stop all conversations when I exit the facility. They never know what could happen in a bathroom or what story can come into my head whilst sitting upon my throne.