I have been living in this country for about 10 years now. Even the time in the middle years when I had to go back to USA for a time I still lived here because all my stuff was here. Anyhow, I only had hot water in the very first apartment I lived in for six months in Ensanche Julietta.

I remember when I moved in and could not figure out why there was no hot water in the kitchen when the shower had hot water. I was checking pipes to see if maybe it was turned off or was broken. I saw nothing. So I called the landlord. She spoke a little English and I spoke very little Spanish at that time. I tried to explain to her that the hot water was broken. She went in the shower and checked and said it was working fine. I took her into the kitchen and turned on the hot water facet and nothing came out. She started laughing at me. I had no idea what was funny. No water came out and she would have to fix it. Was that funny? Then she explained it all to me. The ole imaginary light came on above my head. The only place in the apartment that had hot water was the shower. Hardly anyone had hot water throughout the house. This is the way it is in Dominican Republic.

So when I moved to the Colonial Zone to my new apartment there was no hot water at all. But then half, or more than half, the time there was no water at all. I learned to bucket shower and run a hose from the facet in the street to get water. Then the last place I had we had water in the morning only so it was shower early when there was water pressure or bucket shower. If the water was too cold just had to heat some on the stove.

Now I moved to this new apartment. There is almost always water. The pressure is good. So I guess I am a bit spoiled now. I do not want to heat water on the stove when it is really cold. I want to take a real shower with hot water. So, for my Christmas present from my parents this year, I got hot water in my shower. 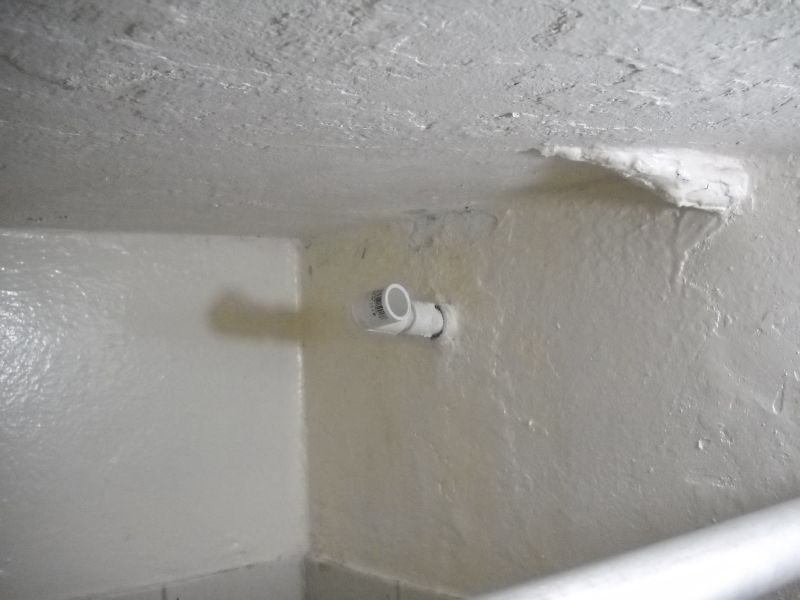 tube in the shower

It was too expensive to put in a hot water heater tank and we could not figure out all the pipes in this old building. So I opted for the shower head with the heat coils inside. It was the easiest way to install hot water. 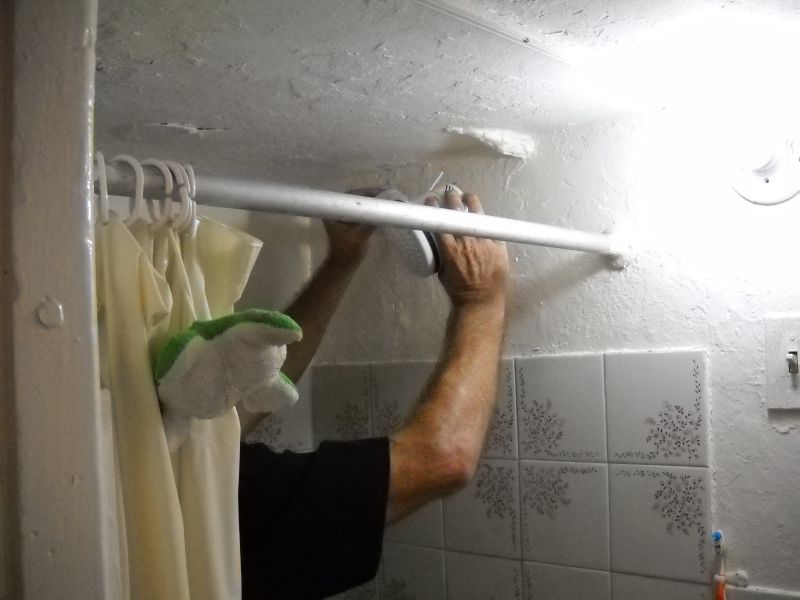 My shower is really small. If I drop the soap and have to stoop down to get it I have to get out and pick it up. It’s about the size of a refrigerator box and the ceiling is really low too. So it took some finagling to get the showerhead in where I didn’t have to take a shower on my knees. 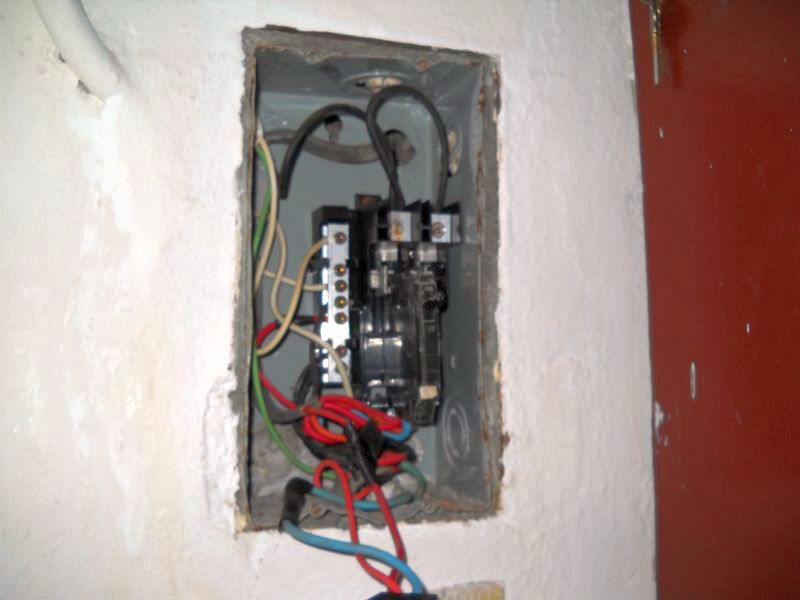 fuse box in my apartment

My Fit-it, repair man Rudolf, is wonderful. He came on time to check out the situation and to see what he could do to get me hot water. He thought he could get me a hot water tank but I did not have enough funds for that. So he said he could fix the pipe in the shower so I could stand underneath and shower in comfort. 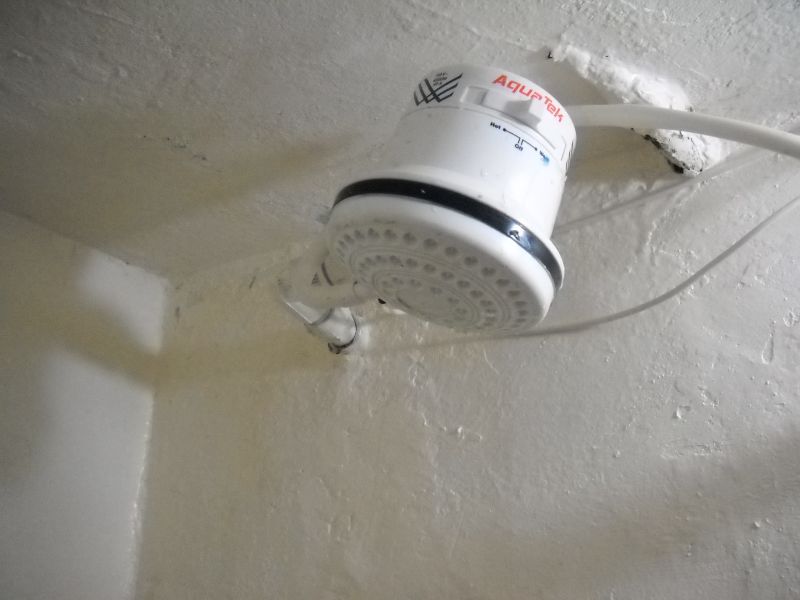 He got all the pipe in. Got the heater hooked up. turned it on and pop! The fuse blew. When he checked the fuse box the fuse was way too small to handle the wattage so he went and got a higher amperage fuse and put it in. When he had the fuse box open I was totally amazed at what I saw inside. Whoever did the electric work had the wiring all electric taped together. I never in my life saw anything like that before. But I shouldn’t really be surprised with the way stuff is done here. Yet every time I see the wiring, in houses, businesses and in the streets I am just amazed.

So I got my hot water all hooked up thanks to Rudolf and took my first hot shower in my apartment. I was so content. I will not use it all the time. Only when it is cold and there is no sun to heat the water in the pipes. Electric here is very expensive and I do not want to run up my bill. But it is so nice to know that I gave hot water when I want it. Thanks to my mommy and daddy for the Christmas present and to Rudolf for fixing it for me. 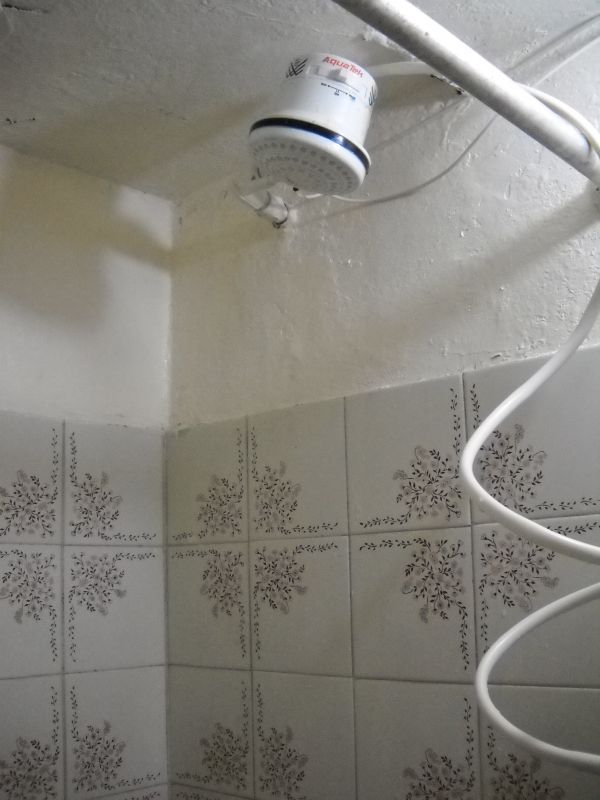 My shower all ready

By the way, I highly recommend Rudolf if you need anything done. His business is called Xpress Dominicana – (check the link for more information about the Handy Man Services) Maintenance and Handyman Services. He does Repairs & Maintenance, Handyman Service, Major & Minor repairs, Painting, Re-Refurbishments & Upgrades, Project Co-Ordinations, Moving & Packing Services, Point Of Sale Installations, Prepare Home for Sale or Auction. Commercial & Residential Cleaning Service. He speaks English which was a really big help. My Teli, The Dominican Dog, really liked him too! His contact information is: 829-665-4144, 829-474-4144 xpressdominicana@gmail.com. Tell him Janette, The Dominicana Gringa sent you!

One thought on “Hot Water For Me!”