Here are bits and pieces of an email I got and because of it I made some new friends. I love being able to make new friends.

(edited) I stumbled upon your writing while I’m researching a Christmas gift for my brother’s girlfriend who originates from the DR. She’s new to the family and none of us knows much about her. Your Christmas page was helpful in many ways but I think most helpful by being a friendly voice and a potential advice giver:)
As it turns out, we live in Pennsylvania! (Thanks a lot for including your current temperature on the site!). You’ll be aware that I can’t do much in the way of fireworks here…but I’d like to give her a piece of familiarity as part of her Christmas. I’m thinking about making a special food. Any suggestions about what that might be and recipes? I don’t know her family’s traditions so I’m looking for a truly universal DR food.
Thanks for your time Janette and thanks for such a great website.

I sent him some suggestions about making Sancocho or some other Dominican type food. Maybe getting some Mamajuana or some Dominican rum and got this response:

(edited) I think I’m going to make Sancocho d’Pennsylvania. There’s no cob corn available now and goat meat isn’t readily available….but it is Pennsylvania it is deer hunting season after all so I might adapt with some venison. My thought is that squirrel or rabbit might be better replacements but that venison will be gamey enough as a substitution. We have plantains aplenty though…amen to our diversifying population:)
My favorite thing about that recipe is its size! You can tell that it comes from people who value large family gatherings. There will be about 12 of us on Christmas day and I’m quartering the recipe. I wish there were 50 of us:)

We sent another email or two and we agreed that in PA Sancocho game meat could be a substitute, as the recipe is not set in stone.

On December 24th Greg sent an email:
(edited) Janette….It has begun. Venison defrosting now:) Debbie took over so I’m reduced to writing about the project….but hey, she’s a better chef than I am and doesn’t swear while dicing vegetables:)
I think this is going to work out well. Rick gave me a big Venison roast and probably 20 pounds of pork that his father raised. When I got the beef today, the butcher severely cut his price on the beef (just nice…I didn’t know until I was paying)
Anyway….Christmas music on and dogs asleep everywhere…kids cleaning the play room and Sancocho started. It’s a good Christmas Eve. Thanks for being part of it, Amiga:) Merry Christmas.

The next communication I got had the end results and the picture included.

(edited) PA Sancocho was a hit! Lorena was thrilled and surprised. She didn’t know it was coming but coincidentally had been describing it to my brother the night before.
We made a few substitutions based on availability. We used a turnip to replace one of the root vegetables and of course, the venison instead of goat. The first substitution went unnoticed but we asked for feedback about the deer. She said it tastes just like goat:) I even found fresh corn on the cob:)

The whole family really enjoyed it and my mother’s lasagna went un-eaten….which means I got a lasagna to bring home. (Bonus:)

They got to enjoy their PA Sancocho and all I got was a lousy picture..jejej. I am so happy that I could help them show their new Dominican friend a good Christmas. That was so nice of them to care about her and work to make her feel comfortable and at home. 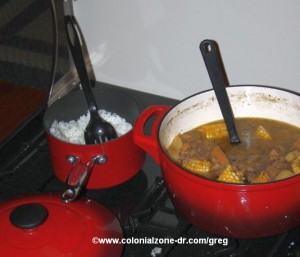 There are still many good humans in this world and this family is some of them.