It has been going on for a while. All the excitement, noise and craziness of the Presidential campaign. Roads blocked, lots of paid crazies and the political campaigners, helicopters in the sky, people arguing about who is the best and presents being distributed. All this is part of the political campaigning here in Dominican Republic. Oh, did I mention the loudness and all the music? this is fun when it happens in the afternoon but mush of the noise happens in the evening even past midnight.

Sometimes in these processions of very expensive Jepetas (know as SUV’s elsewhere), Hummers down to the local guaguas and public cars with their painted roofs of yellow and green, all take part and join in the hoopla for their chosen party. Sometimes the politicians are even in the parades, waving from the sunroof opening in their painted Jepetas and Hummers. Every where they pass they cause havoc. Traffic jams, noise, people fighting sometimes, there has even been instances where the fights turn deadly.

These are from a few weeks ago, in Santa Barbara away form all the campaigning, and still there were giant traffic jams with the locals direction traffic and I even saw people getting out of their cars to direct the traffic because no one could move. My friends, Teli (my dog) and I just sat there watching, laughing and drinking a nice cold beer (the dog didn’t drink). 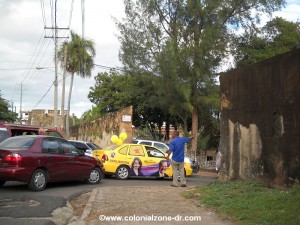 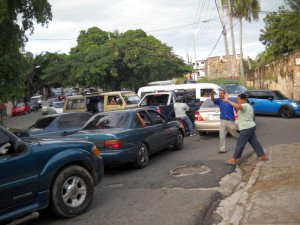 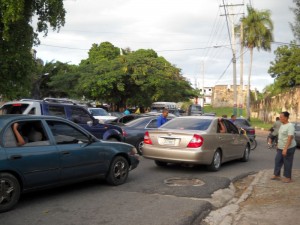 This jam lasted for about 2 hours. At one time no one could move as cars were all jammed together in all directions. They think if they just keep moving forward an opening will magically appear. I just couldn’t believe it when they got out of their own cars to direct the traffic as you can see in the one picture.

Twas the night before Christmas Eve in the Colonial Zone. I was snug in my bed with my dog Teli. Just dozing off there arose such a clatter. I didn’t want to get up to see what was the matter, but after the sirens and music came closer I had just to check. I went to the balcony, threw open the shutters and grabbed my camera. What to my wondering eyes did appear but a giant procession of lit up cars with lazer lights-a-flashing and speakers-a-pounding turning from Calle Padre Billini onto Isabel la Catolica. They were wahooing and yeahing all these political campaigning creatures. Not caring about the people trying to get some shuteye. There were jepetas and hummers with shiny bright lights. Then came music and sirens to no ones delight. These noise makers kept rounding the corner. I never thought it was going to end. The sirens were sirening and the car alarms alarming, the people in the vehicles just kept on careening. As they drove off into the night on up Isabel la Catolica on to disturb others in their beds. Distributing their mayhem. They left behind a ringing in the ears and a slight smile on the lips. But worst of all was the car alarms they left ringing. The owners must have been partying in some local bar oblivious that their cars were yelling into the night…for 2 hours!!! Gotta love this country even if you don’t always!

This is the video I took. My camera has not been taking the best videos lately. I think it is getting old and is dying slowly. Sometimes it works well and others it just is.

At least you will get the idea of that noisy night. You might want to check the speakers because it is a bit loud.