>I got an email from John that he wanted to visit Barahona after he read my trip report (Barahona trip). I was happy to return and share my discoveries as I had such a good time there the first time I went. The only thing I wasn’t sure about was that he and his daughter Kelsey wanted to rent a car and drive there. I am not really good on the roads here as I never had the guts to drive in this country but this is what they wanted so I went along for the ride as their guide. First I did tell them that I did not know the roads as I always use public transportation but they were up for the adventure and what an adventure it turned out to be for us all.

They were staying their first night in Boca Chica and I took a taxi early Saturday morning to meet up with them. We got along great and they were up for the adventure so we were off in the rental car after a good breakfast.

We did fine driving and enjoying the view along the Malecon. The highway to Barahona was for the most part smooth. We only had a few close calls on the drive there. One when someone stopped in front of us for a conversation in the middle of the street, as is the norm here in DR, and dodging a few large holes in the street.

We stopped at a Colmado for a beer mid trip. John was amazed at how much rice a man had on his plate for his mid day meal. I explained that this was the normal serving here. I was explaining the culture and things along the way. As my usual talking non stop because I love sharing stuff about this country.

We got into Barahona and stopped at a restaurant. I called my friend Ruddi and he came by and said hello to us. Then we drove down the coast to San Rafael. We had no real destination in mind. The only thing that was sure is that we had to get some raw larimar for John to take home with him. Other than that the day was clear.

The road was winding and the scenery was beautiful. As we drove up to the San Rafael beach/ river area the scene was breathtaking. The bay was bright turquoise and the waves were white. We stopped to take it all in. Then we drove down the hill to where the river enters the sea and took a few pictures. We stopped at a roadside place where a lady was selling larimar and they bought their stash or the gem only found on our island. Then we decided we best start looking for a hotel to stay the night. 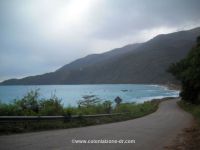 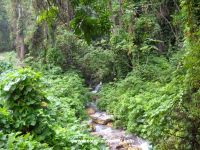 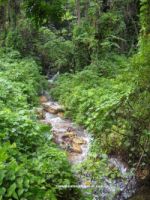 The Bay and River at San Rafael (click images to enlarge)

On our way back to Barahona we were stopped at one of the many police check points. The guys had their big guns and made us open the trunk for them to have a look see. There was nothing for them to find so we went on our merry way on our quest for a hotel.

We stopped at so many places. All were full. I never left the city on a holiday. Now I know why. Without a reservation on holiday weekends it is almost impossible to find a place to rest the weary head. We stopped at a friend’s hotel and they called around for us to try and find a place vacant. A guy from the hotel took us to one place that had a vacancy but the music was so loud there we would have never slept so we decided to head back toward the capital and maybe find a place in Azua. This is when the real adventure began.

We followed a sigh that said Santo Domingo. The road did not look familiar but we kept going as I thought maybe it was a new highway. There were deep ditches on either side of the road that made me a bit nervous. It was dark by this time and driving at night in the country is not easy here. We almost went off the road once when they sugar train tracks were not marked. We just barely dodged a few car-eating potholes. We got onto some dirt road where people were all staring at us probably wondering what a car with 3 Gringos was doing when the road lead to nowhere. We had to turn around and go past the staring humans again as the road got so bad we knew we were a bit lost. All the time we were laughing and enjoying the situation. But as the night progressed we all got a bit more silent. I could not figure out why we had not come to the town of Azua yet.

Finally we saw someone to ask where the heck we were, after at least a 1-½ hour drive in the dark. He said we were on the wrong road and the only way to get to Santo Domingo we had to go back to Barahona. We stopped to get gas and asked a man there where we could find a hotel. He said his wife’s cousin had a hotel, the only hotel in the entire area. He said it was about 5 minutes away and we could follow him to get there. It was more like 20 minutes away but we followed him. What choice did we have at that hour of the night (it was maybe around 10PM?

We got to the hotel. Hotel Restaurant Deysi Hermanos (809-527-3951/ 3679). This is the only hotel in the entire area. It was in the town of Neiba. Not very far from Lago Enriquillo. We really went the wrong direction. Thank goodness they had rooms! YEA! We had a place to lay our heads and relax a bit. The guy took me to get some water and ice as there wasn’t anyplace within walking distance at night to get this stuff. We gave him a few hundred pesos for his help and retired to our rooms for the night. 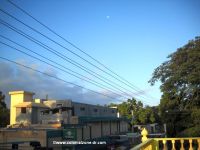 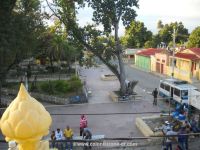 View from the Deysi Hermenos Hotel Balcony(click images to enlarge) 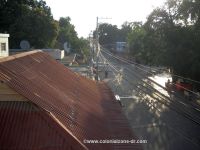 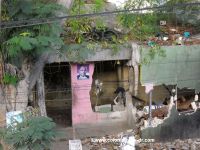 In the morning we decided we would just head back to the capital as we didn’t know if we would have more get lose times. Remember, I told them ahead of time that I did not know the roads. They were not angry with me instead they were enjoying the adventure. On the trip back we passed a lot of sugar cane fields and workers. Things we passed the night before but never saw. The sugar cane train went slowly past. We had a few close calls on the road but that’s normal here. We stopped for a horse in the street and waited for him to get off the road to protect him form the crazy drivers speeding past without paying attention to it.

Finally we got back to Barahona to start again for Santo Domingo. We turned around and followed the sign and ended up on the same road to Neiba! It was like we were in the Twilight Zone or in an episode of Children of the Corn (or maybe Children of the Sugar Cane) where you can never leave the town. There was a police checkpoint so we decided to ask for help there. I told the police our story and he had a great solution for us. We were in luck. A sergeant there needed to get to Santo Domingo and instead of him taking the bus he could ride with us and show us the way. What a deal, getting directions and a police escort. So he got in the back seat with Kelsey and we were on our way back.

The policeman was enamored with Kelsey, as were most of the Dominican men we encountered. He kept trying to talk to her but she knew no Spanish. She said his gun was sticking out of his pocket and one time it fell out on the seat. He saw that it came out when she was staring at it and put it back in his pocket.

Other than this the trip back was uneventful. We made one liquid refreshment stop. I would have never found the way back. There are no road signs worth speaking of. There might be one sign then the next turn there is none. So normally, without a sign, one would assume that you are to keep going straight. I learned not to assume anything here. Every fork and Y in the road you need to stop and ask if that is the way or you will end up in no mans land like we did. But the best way to travel in DR is with a PMA (Positive Mental Attitude). Take your time and enjoy the adventure. Laugh at your screw-ups and mark it up as one memorable vacation.

Well, we made it back to Colonial Zone. Then they checked into their hotel and we went on a little walking tour of the Zone. John did no have time to deliver the supplies he brought for the orphanage so he left them with me to deliver later. We walked a few hours in the Colonial Zone but we were all beat from the road trip so we returned to the hotel. We sat on the patio and recalled our adventure over a few cold Presidente beers then said our goodbyes.