I also discovered that each larger neighborhood is divided into smaller sections. (I’m trying to find out the exact information about Colonial Zone to place on the web site). I believe there are about 8 different sectors inside the Colonial Zone area. Each voting for their own President, Vice President, Secretary and so on. 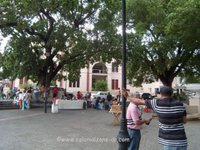 I got to watch my old neighborhoods vote (I could not vote as I don’t live in that section now. I hope to vote in the Parque Duarte elections coming up in a few weeks) and it was a serious matter indeed. There was even a policeman watching over the elections. There was a designated committee to take care of the voting table and to count these votes.

The first step is to go to the table where the committee sits, sign in and take 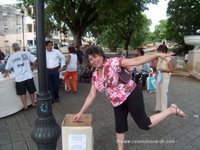 the ballot. Go over to the table with the policeman and write your selection (this table was a dominoes board which I thought was very interesting and quite official looking). The next step is to go to the big box to deposit your vote. Then sit and wait for the results, conversing with the neighbors and maybe partaking of your liquid of choice.

At 5 the voting was finished. It started raining so the election board guys moved into the Colmado owned by one for these guys, Colmado Arca. The 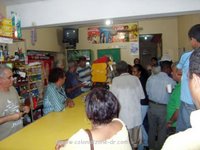 place got especially packed and loud as the votes were being counted. One of the counters had to even call for silence as this was a very critical moment in the electoral process.

I moved outside to wait for the results because there were just too many people inside the small Colmado. Soon after there was clapping and lots of commotion at the Colmado as the winner was announced. People were clapping and singing as they left the Colmado to share the results with everyone. It seems that the victors won by only 3 votes. Now lets hope her and her team will bring some good parties to the park and also do some good things for my old neighborhood.