My aunts came to visit and Jetta wanted to bring travelers checks. I asked my bank if that was an OK thing to do and , of course, they said “No problem”. Well, it was a big problem. 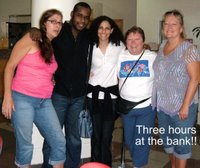 Jetta signed the checks and handed over her passport. The girl behind the desk took the stuff to the teller and we waited. A friend of mine came into the bank so we talked a bit. And we waited.
Finally we asked what was going on and they said they had to clear the checks…”No problem”. so we waited.
Another friend came into the bank and we chatted a bit. We were starting to get a bit annoyed after about an hour and a half and we were getting louder and hungry.

Some other friends entered the bank and they spent about an hour hanging out with Lois, Jetta and I. We made up a song called “Fat Chance”. The 5 of us were making up verses (my friends have a band and sing really well…my family and I don’t sing at all) for the song like “We have been waiting in the bank 2 hours. Trying to get our money. Will we ever get out money? FAT CHANCE”. We wanted to take a walk about of the Colonial Zone. Wanted to see the sights. Will it ever happen? FAT CHANCE!”. We wanted to get some beans and rice. Go to a typical cafeteria. Will we ever get to eat? FAT CHANCE!”. The 5 of us were singing away. entertaining ourselves. 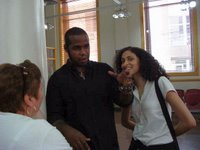 The friends finally had to leave and guess where we were? Still in the bank! One of the workers kept telling us we had to be quiet because it was a bank. Another brought us coffee. But we kept getting louder and more annoyed. I finally lost it and got angry. We got the bank manager lady out of her office to see what was happening and I called my friend Mamita to see if she could help. 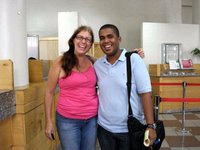 After 3 hours they finally said that the system was working again and they gave us the money! I finally got to take the aunts on their little tour to Mangito. We didn’t get to eat la bandera that day but we did get some great roast chicken in the street later. So even though we spent 3 hours in the bank we tried to look at the positive side. We had 3 hours of air conditioning. They met some of my friends. We made the Fat Chance song. We had some good laughs and another interesting story to tell.

The moral of the story is if you think travelers checks are accepted worldwide and you will get them changed easily and fast. Remember…FAT CHANCE!!