The starting point of this 10K race is the Plaza de la Puerta de La Atarazana at Avenida del Puerto in Colonial Zone. The route crosses the floating bridge over the Ozama River going around the Columbus Lighthouse, returning on the same route to Fort San Gil and then returning to the starting point. They are expecting over 3,000 people to participate. 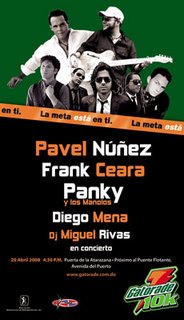 10K Gatorade advertising campaign slogan is: “La Meta esta en ti” / “The Target Is In You”

100% of the funds raised will be donated to the Asociación Dominicana de Rehabilitación / Dominican Rehabilitation Association, an institution that provides functional rehabilitation for people with physical and intellectual disabilities.