>This last week has been so sad here. The Tormenta Noel hit us without any warning. It was raining hard Sunday and then in the evening the wind started. It was whisteling through the streets and things were crashing and banging all night. We had no idea there was a storm passing by. The lights were out so there was no television and I didn’t have a battery powered radio (I wouldn’t have understood much anyhow as my Spanish is bad). The following morning it was still raining hard and there was noone in the street as usual. I didn’t plan on going out that day and hadn’t gone out on Sunday either as I was trying to rest to get rid of this Gripe (flu) thats been hanging on.
Finally the power came on and I turned on the TV. I couldn’t believe what I was seeing and hearing. A tropical storm hit and wasn’t moving fast. Places were flooding fast with the people having no warning. The rivers were overflowing and houses were covered. The rain was still coming down. The power went out again. It was out in the entire country.
The next day the rain was still here. The power was out in almost all the country. Here in Colonial Zone we did get power but it kept going out. Things were not bad here. But the rest of the country, outside of the city. People living in the campos and along the rivers had lost all they had which is not much. Big houses and small all wiped away. Bridges and roads gone. Crops whipped out. Lives lost.
Just watching the images on the television made me cry for these people. I had to go to a Colmado and wath as the power was out and I don’t have back up power. People were just watching the images in horror.
A friend of mine, living in a small barrio in Santo Domingo had been without electric for 4 days.
I spoke to a shoe shine boy. He siad that the water rose over his house in less than 2 hours and his families home was covered. They had no time to remove their things. All they have is gone.
Here in Colonial Zone life was going on as almost normal. I, in a way, felt guilty that I was in a dry bed. Was able to drink a cold beer and have hot food and these people were struggling for their lives.
Heres some pictures I found to share from some different newspapers.
Associated Press 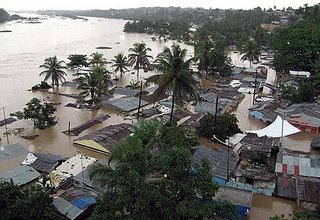 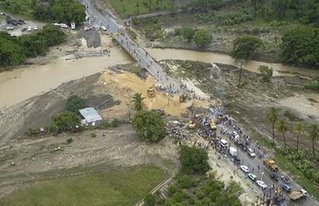 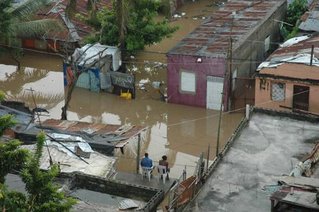 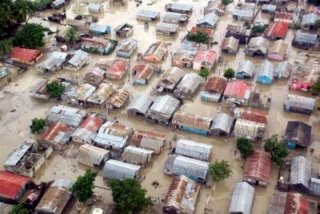 According to Dominican Today “the number of fatalities are now 73 and rising. 43 people are missing, 64,960 were evacuated, 22,758 of which were taken to shelters.
Police spokesman Ramon Rodriguez said 526,000 people have been rescued and 16,024 houses were damaged by the floods, 686 of those completely destroyed. He said 62 communities are still unreachable by land as 35 bridges and highways were affected.”
They also have a list of organizations to help the flood victims

This is just devastating for this country. The people, crops, farm animals and now the aftermath heath issues. The dams are bing watch closely. Clean water is hard to find. Food prices will rise because of all the crops and farm lands affected.
This problem started with the rains and it will be a long, long time before it is resolved.