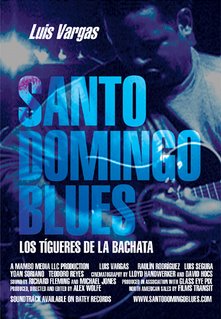 I saw the movie Santo Domingo Blues recently. I really enjoyed it. Being away from Dominican Republic when watching it made the movie so much better. It made me long to return home to the island (but then everything makes me want to return to DR).
My favorite parts of the entire movie were the scenes that showed the campo. The real people of the country living their everyday lives. Reality of life away from the cities.

There are many different well known Dominican performers from the past and present represented in this film. The one I most enjoyed was Aridia Ventura. She is known as “The Executioner” because of the way she puts down men in her songs. All we women can appreciate her bitter and true words about the opposite sex. She doesn’t preform any longer since she lost her eye sight. This rare performance is very special and informal.

The old timers include Eladio Romero Santos(he has past on but his music is forever with us),Ramón Cordero known as “The Sparrow”,and José Manuel Calderón. I loved watching these performers in their element. Sitting in the yard with a little ron or a bien fria (rum or a cold beer) and playing and singing from the soul.

This movie was about Luis Vargas, of course. He was one of the first bachata singers I ever heard. I went to Dominican Republic on a vacation and heard this music. I was not sure if I liked it with the twangy guitar and the strange old sounding voices. So when I returned to USA I ordered the Putumayo Presents: Republica Dominicana CD. This disc had some great songs along with their lyrics and the translations. After listening to it a few times I was hooked. So I searched for this new (new to me) music, even if I didn’t understand the lyrics.

Later, after I started understanding more of the language, I realized that Luis Vargas was a bit of a pervert. I liked his form of irreverence, even though his Machismo attitude does irritate me a bit (you must remember I am a woman). He sings songs with double meanings (which is elaborated on in the movie Santo Domingo Blues). He was even banned on the radio for a time. But I enjoy irreverence with style, and I do have to admit Luis Vargas has this attribute. I have seen him in concert and it is a really good time. The enthusiasm he brings to the audience it contagious.

If you would like to learn about Bachata music known as Música de Amargue(music of bitterness) this movie is great. If you want to see some of the real life in Dominican Republic this movie will show this also. For a documentary I thought this movie presented the information in a really entertaining way, not just a bunch of people talking. Another big plus was the narrator, one of my favorites, Luis Dias (read more about Luis Dias and hear a song of his).

For more information on Bachata music

You can rent this movie from Net Flix

To buy the DVD from Amazon…Santo Domingo Blues (2007)

to get the Putumayo Presents: Republica Dominicana