I did get to see much of the island but most of the time I had no idea where I was. I just went along for the ride. At times the rides were uneventful and others they were quite noteworthy.

Once I went with a friend and his family to La Vega to visit the grandparents. It was nice just hanging out with the family and sometimes I even understood the conversation.

From here we got in a truck and headed to the mountains. It was somewhere near Pico Duarte. We drove on some hazardous roads. It was dark so I had no idea just how dangerous this road was until the next day when I saw it in the light of day. I couldn’t believe the road. Dirt. Steep banks dropping down into the forest. Road half gone because of a rain storm that passed. But it was worth it just to have spent the time in the campo.

The home we were going to was some type of mountain biker stop off. There were a few rooms for sleeping but most of the house was open air. It sat on a steep hill that descended to a calm, cool river. It was so peaceful and serene just watching nothing, enjoying the quite. 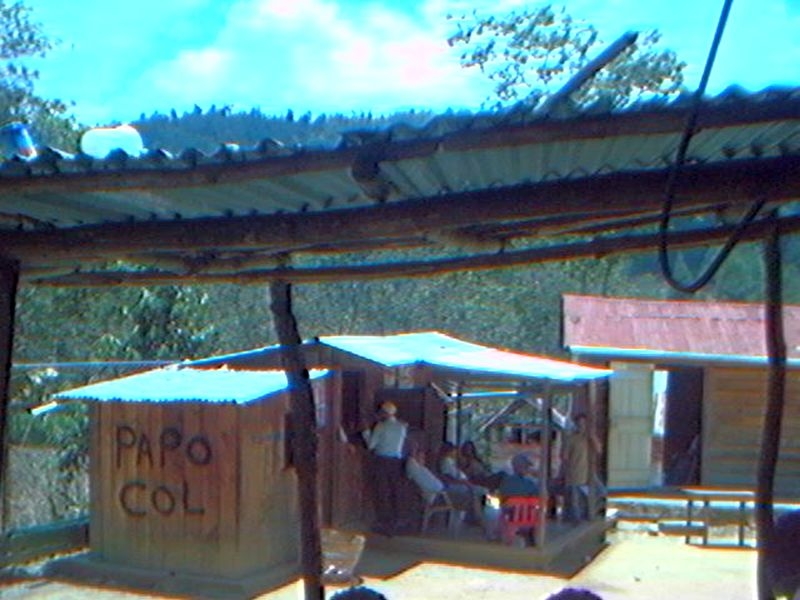 Colmado Papo only had electricity on the weekends.

There was a little Colmado down the street, or should I say, down the dirt trail. There was no electricity in the area just generators. This Colmado didn’t use the generator but on the weekend so we couldn’t get any cold beer. So the next best thing was some rum. We did bring some coolers with ice so we shared that with the people sitting in the Colmado and had a little party with the locals. I even danced a little bachata with some of the men around. They got a good laugh out of it. I will always be the first to make fun of myself. 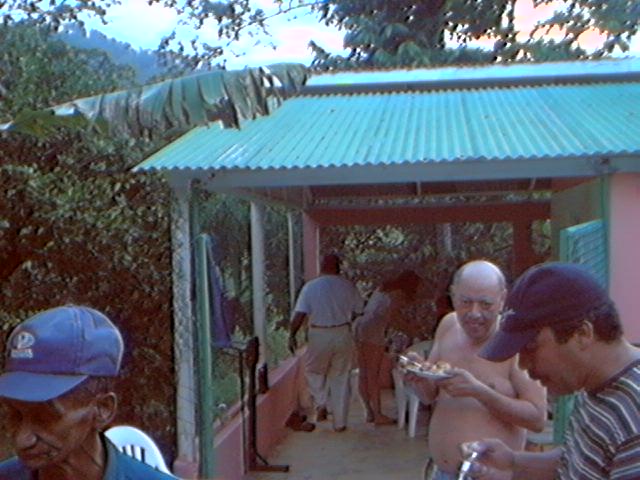 Everyone was happily eating their feast of Sanchocho

The caretakers of this house cooked us some sanchocho on a fire in the yard. There was about 8 of us that got to devour this typical Dominican dish. We were all so hungry after a day in the country we devoured that stew up.

Since I do love the outdoors and camping, I had to take a walk alone. I walked down some trails and ended up by the river. There was a horse tied near the river with no one in site to claim ownership. There was a swinging bridge crossing over the river which looked as if it was used often but there didn’t seem to be any life around. It was just amazing to me that people lived in these remote areas where there were no roads. Only foot paths. I could never imagine having to carry groceries such a long distance on foot.

I did a little more walking and my friend came to find me since I was gone, alone, for over an hour. We decided to take a swim in the river. Sin ropa / without clothes of course.

All was good. We found a deeper spot and were playing in the water when out of nowhere 2 boys magically appeared on the bridge. They were maybe 8 years old. Of course seeing a Gringa with her white butt shining like the sun itself got some unwanted attention. My friend and I knowing we were discovered could do nothing. Our clothes were across the river on a rock. Not within grabbing distance.

There was a large bolder so we clung to it. Hugging that rock because it was our only guard against those eyes that kept staring at us.

The kids would not go away. They were laughing and pointing. We were rock hugging and laughing with them. What else could we do? We were stuck.

Well, while we were hugging the rock and not moving much I kept feeling things on my legs. At first I thought it was just debris brushing up on my legs as it flowed down the river. Then the debris started pinching. It was not river muck it was fish! They were biting me! They were nibbling at my legs. It wasn’t big bites but I could for sure feel them and it wasn’t really pleasant. I kept thinking a bigger fish would decide to come along and join in the feast. We had to keep kicking our legs to keep the fish away, laughing at our situation, with the kids still gawking at us.

Finally the kids got bored. What seemed to be an hour was really about 20 minutes. We decided to make a run for it and get our clothes. I had just got my pants on when the kids reappeared. I had to put my top on under their watchful eyes. But it was too late. They must have been laying in wait for our escape from the fish and the river.

We got back to the house and shared our story with everyone there. Within an hour after getting back to the house these little red blotches started appearing on my legs. They were itchy and very noticeable. My friend had them also but his didn’t show up like mine. Red on brown skin isn’t that noticeable but red on white flesh really shows up! 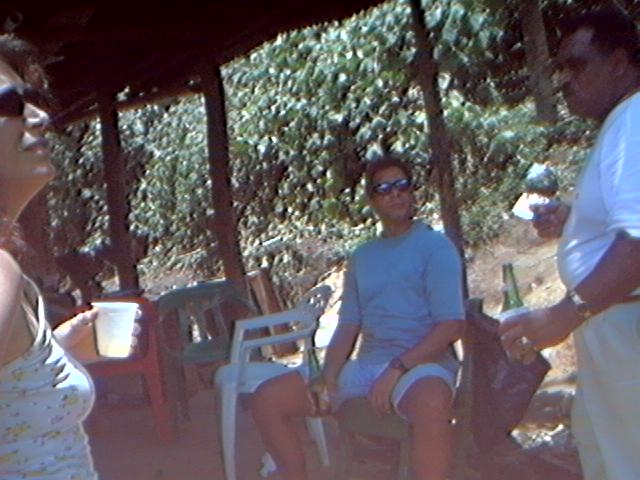 We were just hanging out and talking and enjoying the country

It ended up that the no seeums got me. I didn’t feel anything or see anything. I guess thats how they got their name..duhhh. But those dots stayed on my body for about 2 weeks. The itching went away but the blotches stayed. I thought they were never going to fade and I would be deformed for life. But in time they did leave. But my friend lost his dots within days. Not fair!

More information on nosseums(opens in a new window)

The experience in the campo was fabulous. I went out and laid in the street where there was no tree cover and watched the vastness of the Dominican sky. The stars were so bright. The air was so cool. Not a car or person passed by in the street. It was so quiet. Wonderful.