A group of friends decided to take me with them for a few days on their quest for the big wave. They are surfers and on weekends they go around to surfing spots. I don’t surf but I can always find something to do while they are in the water. I love exploring new places and meeting new humans. As long as there are people to talk to, sights to see and Presidente beer to drink I can be very content.
They decided to head to Nagua. I had been there before with some of my closest friends, Tony and Lenin, whose families live there. It is a fun city for sure. I love the saying for the town,”A Nagua tu entras si quieres, y sales si puedes” (translated, Enter Nagua if you want, leave if you can). Which I did not understand until I was there. 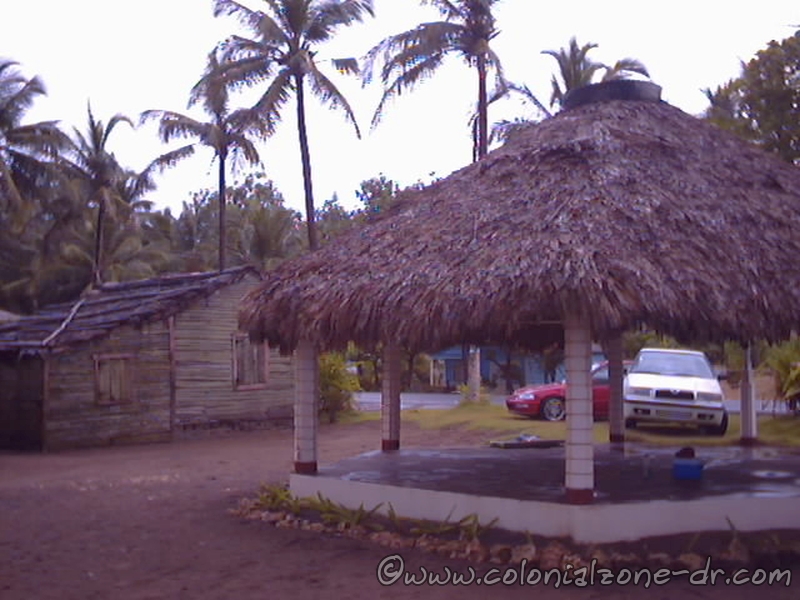 Where we went for the guys to surf in Nagua, Dominican Republic.

The surfers took me to a beach where there were no humans. It had a strong wave. It didn’t seem like a public beach as it had lots of debris on it. There was also a wall where the water washed away the sand and made a big drop off about as tall as I (5″9′). So I was sitting on this sand ledge watching the surfers doing their thing when these 3 children came over to investigate as to why this lone Gringa was sitting on their beach.

They were talking to me and they pointed to a small house almost directly on the beach. I figured this was where they lived. They were talking fast and I told them I do not understand that they need to talk slow because my Spanish is bad. So of course, instead of talking slower they talked louder. They thought I didn’t understand because I couldn’t hear. I told them again and they talked even louder, not slower. Finally, I got them to understand and their voices returned to normal level. 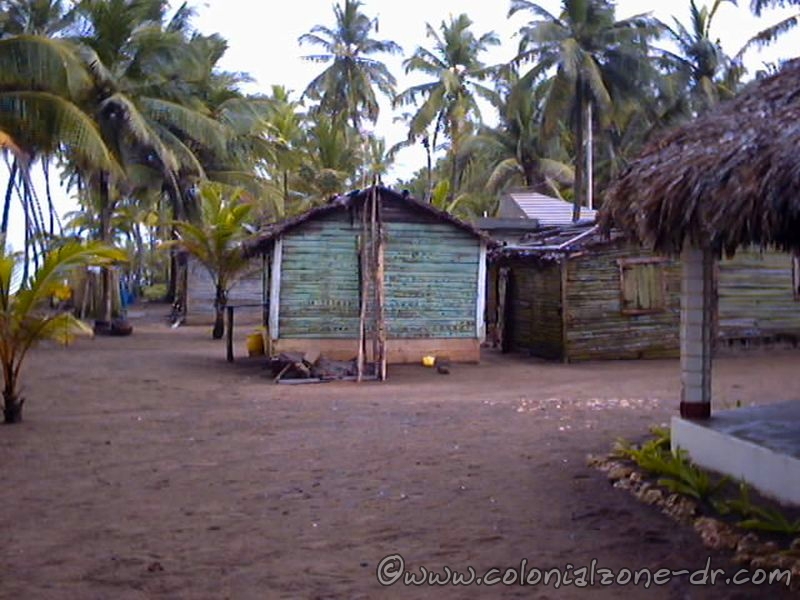 Where we went for the guys to surf in Nagua, Dominican Republic.

This took a while but I finally got the story. One girl, the youngest, maybe about 7 was so animated when she was telling the story. She was jumping around and getting all excited. The older girl, maybe around 10 was sitting calmly and agreeing with the younger one and adding a little more description to the story. The little boy, maybe about 6, was too busy being hyper and making the sand wall fall down, smiling at me and flirting in his little boy way. 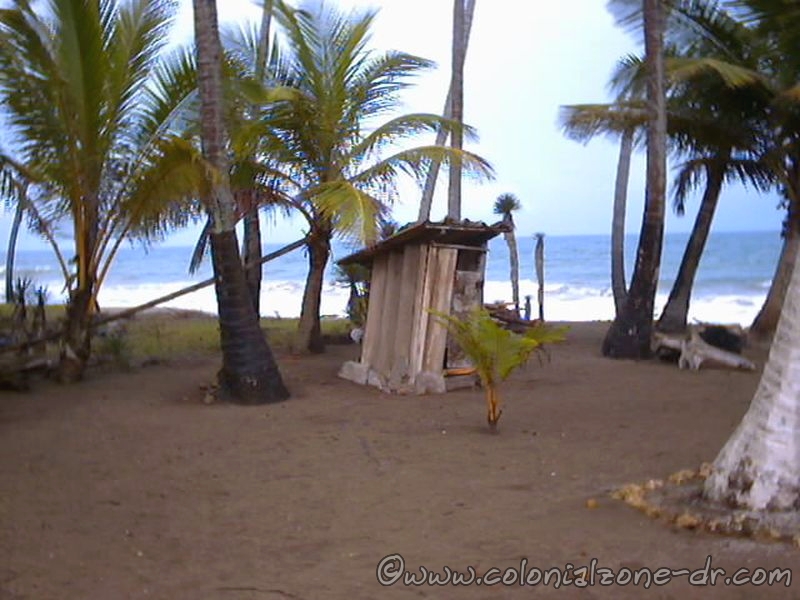 An outhouse on the beach in Nagua, Dominican Republic.

So here’s the story as I understood it..

There is a beast that lives in the rocks in the distance. He is long, sort of dragon-lizard like. It can walk and leaves footprints in the sand (about as large as my size 10 feet they said). It is very mean and only comes out at night. They have seen it on the rocks sometimes but they got too afraid to really look at it. This creature stalks the beach at night looking for dead fish and little children to eat. It had a large mouth and big giant teeth. It also has red eyes that glow in the dark. It has a long tail that drags behind it and leaves a trail on the sand. It makes a hissing sound that they could hear sometimes when they are in their beds. It is the color of the sand.

The way I understood it is it is a story the parents tell the children to keep them off the beach at night. A Boogyman story of the sea.

This story took a long time to tell, at least an hour. My lack of understanding Spanish was the biggest problem. During the story I had to make them explain in words I could understand. They had to draw things in the sad and dance around while they were telling this story. With the oldest sister chiming it to tell the younger when she said something wrong and the little boy coming over, wide-eyed adding his 2 cents when he felt appropriate. If only I had a video camera at the time. It would have been a great tape.

After the story the kids wanted me to go to their house which was close directly on the beach. There were lots of people moving around the home as the girls held my hands telling me something else that I had no clue what they were saying. The boy was in front walking backward probably to make sure I was really following. 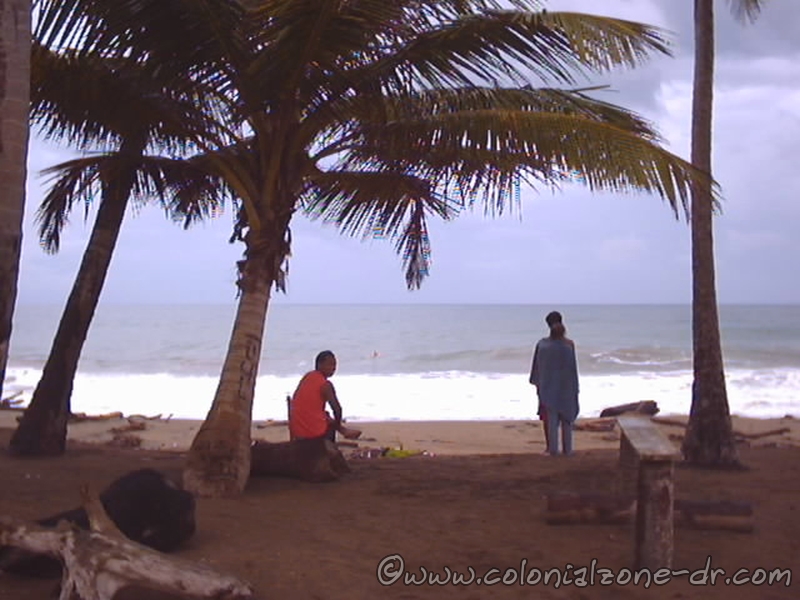 The rough seas perfect for surfing in Nagua, Dominican Republic.

We walked around to the front of the house and a wonderful scent hit me dead on. I saw what all the adults were doing. Over a fire where was a pig roasting. Snout and tail still intact. They were placing this huge feast on a cement table that was attached to the house. The smell was so wonderful. I was making yummy sounds because I didn’t know the words to say. They were inviting me to have some of their piggy dinner.

I excused myself and walked to the street where there was a Colmado and bought a few Grande Presidente beers for my donation to the feast.

I returned and they gave me some of this meat that had been alive probably that same morning. It was so good and of course, the kids were watching the Gringa eat like they never saw a person eat before. I didn’t think I ate much differently than them but I guess I was wrong by the way they watched me.

I couldn’t stay long as I didn’t want the surfers to return and I wasn’t there. Also, I was feeling a little uncomfortable sitting there in my bathing suit with a scarf wrapped around my bottom. There were a few of the men that made me feel as if I had no clothes on at all the way they were looking at me.

So I thanked them all and went back to my spot on the beach alone. The kids stayed behind. I sat down and was laughing to myself out loud remembering the children telling me their story, savoring the pig juices leftover in my mouth, and waited with bated breath for the surfers to return. Keeping an eye out in case I caught a glimpse of the “Beast from Nagua Beach”