Billy Jay always had problems, issues as the world calls it now. I hate that when people say someone has issues. Everyone has some issues. Anyhow, Billy Jay had substance abuse problems that he just couldn’t seem to fight. No matter how much all who loved him tried to help. Nothing worked. Yet he lived his life to the fullest. He had more adventures, both good and bad, than most people have had in their entire lives. He always kept a captivated audience with his adventure stories. All true. His short 23 years of life was filled with love, adventure, happiness and close friends. But it was also shrouded in trauma, sorrow and emptiness.

The evening he died, I did not know until the following day. I was at a friends home. Mamita and Jimmy’s place. It was a Saturday. I wasn’t feeling well so I left early. The cab we called, I knew the driver. He was a friend of mine. I got my dog and the 3 of us sat in the park in front of my apartment. We had a few beers and shared stories. I told him about my son and some of my little adventures. He went back to work and I went to my apartment. Early for a Saturday night.

In the morning on a lazy Sunday, Sniffy (my dog) and I were just laying in the bed. Thinking of which direction we would go for our traditional Sunday walk-friend finding adventure. Then my cell phone rang. It came up unknown number, which I usually wouldn’t answer. But I answered. I don’t know why.

A woman’s voice on the other end asked for Mrs. Keys. I told her it was Miss Keys and yes, it was me. She proceeded to ask me if I knew a William Keys. My first thought was “what did he do now”. She told me we have your son. My brain was still a little fuzzy from sleep. I remember I asked her what she meant. The first thought that entered my head was that he was arrested for something stupid again, like sleeping in a park. Same as before. She said “This is the Allegheny County Coroners Office and we have your son”.

I had to think.

I asked her to repeat herself. I asked her “What are you telling me? My son is there? Dead?” she said I’m sorry but yes.

I remember a sensation came over my body. Like a numbness just took over and sucked all feeling out of my body. Like even the emotion was gone. Blank feeling. So hard to describe. Was this real? Was I awake? Who would play such a crude trick on me? I asked her for her name and number and said I would call her right back. this I did right away and she answered. I asked her again what she told me.

She told me the sketchy details. He was found about 7:30PM in the woods near some railroad tracks in Pittsburgh PA. I don’t remember exactly what she told me or the exact sequence of events. All is fuzzy to me. I know I called my mother in PA to tell her. I asked her to call the coroner again to make sure it was real. I don’t remember crying just yet. Just not feeling. Too numb.

I called Mamita and Jimmy. Told them what happened. I just had to talk to someone while I was waiting to hear from my mom with the news. They came to my apartment within the ½ hour just to sit with me. I never even asked them. In the meantime I really needed a cig. I went to the Colmado. I didn’t have any money. I didn’t remember to take any. The guy in the Colmado asked me what was wrong. I couldn’t even think of the words in Spanish to say but I think he understood because a few of my neighbors came by within that hour to see if I needed anything.

My mom called back. She had already called my cousin, Josh, to go and see if it for sure was Billy Jay. Identify the body. Even though it is only a picture that you identify. She was getting me a ticket to return to USA for later that day.

I called a friend, x boyfriend, sometime this day for I don’t know what reason. He said he would take me to the airport. Mamita took Sniffy, my dog, to stay with her while I was gone. I really don’t remember flying on the air plane at all. I try to remember but I just can’t. Most of the time in USA, that week, fades in and out still.

Billy Jay, once so full of life, was found face down near some railroad tracks. His dogs leash in his hand. The dog set free for some unknown reason. His backpack was with him. His notebook inside. He always had his notebook with him to write some poem or draw some picture that was floating in his creative head. My phone number was in this book, this is how they knew to call me. He had some change in his pocket and his wallet. His wallet held a receipt. It was for a McDonalds breakfast he and his girlfriend had together before she went to work. Maybe that breakfast sandwich was the last meal he ever had.

He died easily, the coroner said. Time of death was around 4PM. He was found about 7:30PM. He just slipped of in a sleep. They said this because he died face down. They said a suicide is face up. Under his body was the needle and plastic bag that held the death potion that took my boy.

I had him cremated. We had a memorial service for him. There was over 100 people there. People I didn’t even know. Family and friends. Everyone so supportive. Many of us wore red, Billy Jays favorite color. I don’t remember much of the service. People told me I shook through the entire thing. I don’t remember. A few days later we took his ashes to the lake where he loved so much and set him free there. His grandparents, great grandparents, his school friends, his girlfriend and a few of his newer friends all showed up. We said good-bye to Billy Jay remembering funny stories and some of the crazy things he did.

His girlfriend gave me some pictures and some of his belongings. In the bag was a paper from his rehab he has just got out of a week before. On his list of things he wanted to achieve was 1) To get through Halloween clean (since it was his favorite holiday), 2) To get back close with his family (he stayed away from all when he was using), 3) To visit his mom is Dominican Republic (I told him if he stayed clean he could come and live with me. The family was planning on buying him a ticket to visit me that Christmas. Billy Jay never made it to that Christmas).

Sometimes I can feel his presence. Two times I heard him call Mom. I can remember his calling me so distinctly. I can remember what his hugs feel like. His 6’7″ body hugging tight. He was the best hugger. He always hugged. I can hear his deep voice saying to me “I love you Mommy”, tilting his head to the side in his cute impish way just a little bit, as he said this. I called him Baby Boy and he called me Mommy.

All I have are the pictures, videos, and memories. All memories, good and bad, seem to turn good when someone is gone. I try to never say he was or I had a son. I try to say I have and always will have a son. He is always my son. He is always with me. Even if he is not here physically.

Your Mommy loves you Billy Jay, my baby boy. I think of you and miss you every day, every minute, of my life. I try not to cry when I think and speak of you. I try to smile and remember all the good. I know this is how you would want to be remembered. With a smile and a laugh, never a tear. 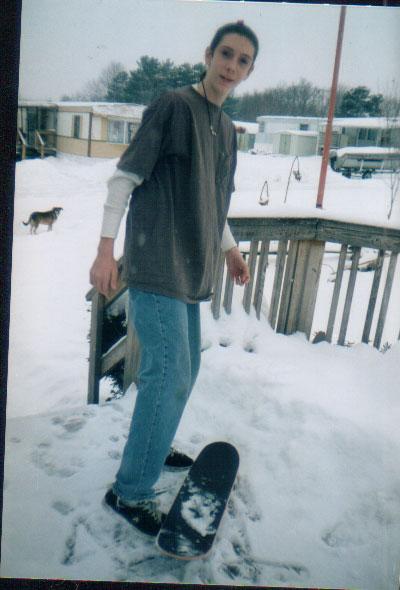 Please check out the link to see my picture collection of Billy Jay I made to celebrate his short life. Billy Jays Memories on Flickr. A picture gallery of my sons life. If you open the drawings and handwritten items toward the bottom of the page you can some of Billy Jays art. Also the memorial concert flier. Heroin Awareness group and his friends did this in Memory of Keys. , the name his friends called him. This is a picture of the railroad tracks near where he was found.

4 thoughts on “A Mothers Worst Nightmare”