My Grandfather whom we called Pappap died about 2 weeks ago. The family had the Memorial service for him yesterday. He was 93 and he lived a good life. He was always healthy. Up until the last few years when he couldn’t get out and work in his garden this is when he knew it was time to go. 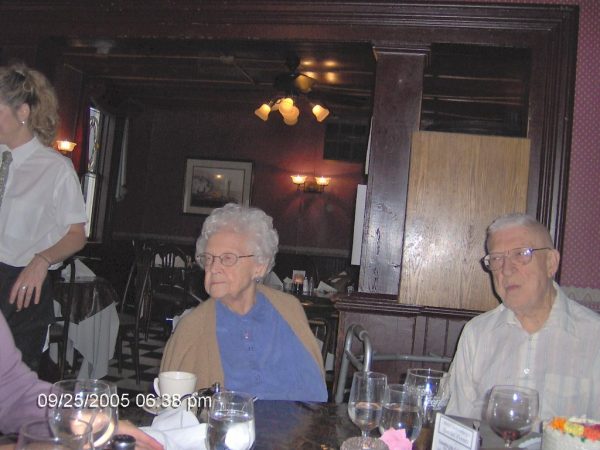 Maw and Pappap on Maws birthday

He wanted to die for the last few years. He told me he didn’t like not being in control of his life. Not being able to drive himself and his wife, my Maw, in the car when they wished. The diaper thing really bothered him. One day, when I was driving him home from seeing Maw., in the hospital he told me” No man should ever live this long” And I agree with him 100%.

The ancient question, what is better quantity or quality of life. I have decided quality. I don’t want to live to be old. I just hope the Doc. Kevorkian (can’t spell that) is in businesses when I’m ready for the jumping off. I don’t want to jump off on my own. After all you hear about committing suicide and not going to heaven, I don’t want to chance it. But if I’m old, all messed up, and someone takes me out could that still be considered suicide? That’s a grey area…I’m always in that grey area.

Anyhow. I’m not a funeral goer. And I can never enter the funeral home here in Mars. This is where they had my sons’ memorial service. I say they because I really didn’t want one but I was told it was for the other people to say good bye. I just can’t understand the funeral stuff. I had him cremated and set his ashes free in a lake area he grew up near. He died in 2003. It was hard but it happened. I conceder myself blessed for having Billy Jay, my son, in my life for the short 23 years I had him. I thank God everyday for letting me know and be the mother to such a unique, artistically blessed, memorial human.

I feel the same about my Pappap. He was the rock of the family. Now he’s gone well just wait and see what happens. If the family slowly falls apart. Who knows. Things change. Sometimes for the best.

I remember I saw a funeral on TV in Dominican Republic. It was in a persons house and all these people were standing around the man’s casket. They were all pouring beer inside the casket! I never saw anything like that before, wasting all that good beer when the guy couldn’t even enjoy it! But really I liked that. It was like they were celebrating the person by doing what he liked to do best.

I also love the tradition of pouring the first trago of alcohol on the ground for the dead. I, being the Gringa that I am, started doing this also. I made sure I said it was for Billy Jay, my son, but I didn’t give him much. I am still his mother and he’s not permitted to drink too much.

I was just thinking about the funeral stuff. Different traditions. I have a friend who keeps her fathers ashes in a box on the TV (sometimes she sits it near her when she watches TV). She has his pictures on the box. Other people wear their loved ones ashes around their neck in a little charm. I couldn’t do that. I could just imagine it like dismembering the bod and who knows what part you’d get to put in the little charm thing. I’d rather keep all the ashes together in one place. Even if it is sprinkled over a garden of placed in a lake.

Me personally I don’t like burying someone. All the embalming to preserve them. I say if your gonna bury them do it like they do in the country in DR. Put them in a family plot. For me that’s the best thing. At least its a little warmer feeling that being with a bunch of humans you don’t know.

Anyhow…I do think it is good to celebrate life. And when someone dies celebrate their life. Don’t remember them as dead (some people take pictures of the dead and save them…eewwhhh..yuck. To each their own I guess) Remember all the good things about their life. Smile when you think of them. Honor their memory by not being depressed over their memory but by being happy in remembering. Don’t you think they really would have wanted it that way?

Also don’t forget to give them a drop of your beverage. Couldn’t hurt!