Paper in hand. Dog sleeping on the bed. Friend finally there to pick me up..having always to remember about Dominican time…I was off on my quest for a new place to lay my little head. Hernando didn’t know where many of the places were that were listed in the newspaper. I had my map . I really didn’t understand a lot of what the paper said about descriptions and he was trying to explain all to me. I wanted a cheap place. I didn’t want to pay more than $100 USD and I wanted to be in a decent area where I wasn’t too afraid. Wasn’t that easy to find but I was very determined.

I couldn’t believe some of the places we saw. Remember, housing is much different in DR than in USA. I had no idea there were places to live in some of the buildings I looked at. Going back tiny little alleys. No driveways. No private entrances. One place I looked at had no doors or fixtures..no toilet, no sink..just holes where they were to be.

We spent all day looking. It was starting to get dark. I didn’t want to stop looking but Hernando wanted to go to his home so we agreed to one more place. It was about $20USD more than I wanted to spend but we looked anyhow. It was in Ensanche Julietta, nice area, some very nice houses in the area. It was a little studio apartment behind a ladies home. She had about 7 apartments and they were very clean and we all shared a patio. Everything was included, even cable TV. Everything except the telephone. She spoke a little English and said my dog was welcome. I found my home.

Hernando co-signed for me, I gave her the deposit and 1st months rent. Got the key and that was that. When I called Carlos and told him I found a place he was shocked. We went to Alexanders apartment that night(he is the friend I went to when the Embassy wouldn’t let me in). 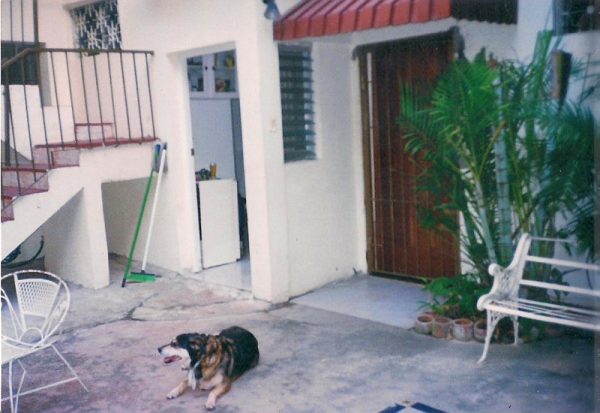 Sniffy on the patio of my Ensanche Julietta apartment 2011.

Now I had to figure out how to get furniture that I needed. I wanted a sofa bed because the place was so small. I needed a fridge, stove, and TV. The basics. Uncle Juan and Carlos came to take me shopping. They were so funny. I wanted to buy the stuff. They kept saying everything was too expensive. It really didn’t seem that expensive to me and I needed it so I really didn’t have a choice.

I finally got them to let me buy a futon (which I really didn’t want. My back doesn’t like Futons much). I got a college type refrigerator and a stove top thing. Got a plastic shelf to set the stuff on and Carlos went and got me a small used TV.

Got the truck to have it delivered. Went to the hotel packed up myself and Sniffy and we moved into our new place. First night had to sleep on the floor because I had to go and buy a screwdriver to put the futon together. Carlos said he would help but I had it all together by the time he got there. Uncle Juan just couldn’t understand why I would even conceder moving to Dominican Republic(he still asks me this question when he sees me)

The next day I tried to go shopping for food. The Sirena store was about 4 blocks away. I was going shopping for the first time. I went into the food area and was in for another shock. I had no idea what half of the food was. Veggies looked different. I didn’t recognize most of the fruit, either their names or the way they looked. A papaya didn’t look like the papayas we had in Pennsylvania. I finally realized..I wasn’t in Mars anymore(Mars Pennsylvania)! Even when I bought a few veggies and went to pay, I didn’t know I had to get them weighed first. I couldn’t find any milk. It was all in boxes on the shelf, not cold in the fridge. I was so frustrated. I had to hold in the tears until I got to where noone saw me. I put my sunglasses on to cover my eyes and walked home with the little bit of things I bought, saying not nice words under my breath.

When I got home I called Jose, I did get my cell phone changed and got a Dominican number. I told him my problem. He was laughing and came and picked me up. We had Mondongo at his house. Then he took me to the store. He helped me get the basic stuff. Mop. Broom. A big plastic bottle for the water (I didn’t understand where I was going to get the bottle filled but I bought it because he said to do it). He showed me some of the veggies. I didn’t even know what a platano looked like. I just thought it was a hard, not ripe, ugly banana.

He stopped at a Colmado (or course we had a few beers) close to my home to get the number so I could call them to have water and things delivered. I was really impressed with that. I could call and they would bring me beer, food and cigs. I was content!

So the next day I called to get the water. I found out that when they bring me the water jug I give them the new one. A deposit bottle. Good deal. So I get them on the phone. Tell them I want a grande auga. They didn’t know what I was saying. They did understand the cigs and beer but the water they just didn’t understand. So I went out knocking on my neighbors door and told the girl, she was from Trinidad-Tobago, what I wanted. She was laughing so hard at me, the guy on the phone was laughing. I found out that I wanted a bote un de auga (I think that’s how to spell it. I only have had to say it, never spelt it before)! Wow! That was a dumb name for a big jug of water. But the Colmado guy came. Sniffy greeted him. I paid. He put the jug in the holder I bought. Good thing cause I had no clue how to get the jug turned upside down without spilling the water. Dumb me!

Sniffy and I were happy. Another obstacle tackled. Next was to go out and explore the neighborhood and get a phone so I could get my computer on line.