Buenagentes girlfriend Fifi invited him to be on the TV show she produces. I got to tag along with him as “la amiga de Buenagente”.

The show is Esta Noche Mariasela on ColorVision Canal 9. The show was called “No Al Maltrato Animal en RD” which is English is “No Animal Mistreatment in DR”.

Buena and me got all cleaned up and had our baths before our big TV debut. Aunty Kay and her friend came and picked us up and we were off. Buena was a bit crazy in the car. He is not used to riding in the car and he always wants to sit up front on someones lap. I do not mind sitting in the back as long as I can see out the front and side windows. I love to watch the world passing me by and enjoy the different sights.

We got to the studio and met up with Fifi. She took us to the Colorvisions version of the green room to wait so we did not get all excited with all the action happening in the studio. I listened very carefully to all the instructions. 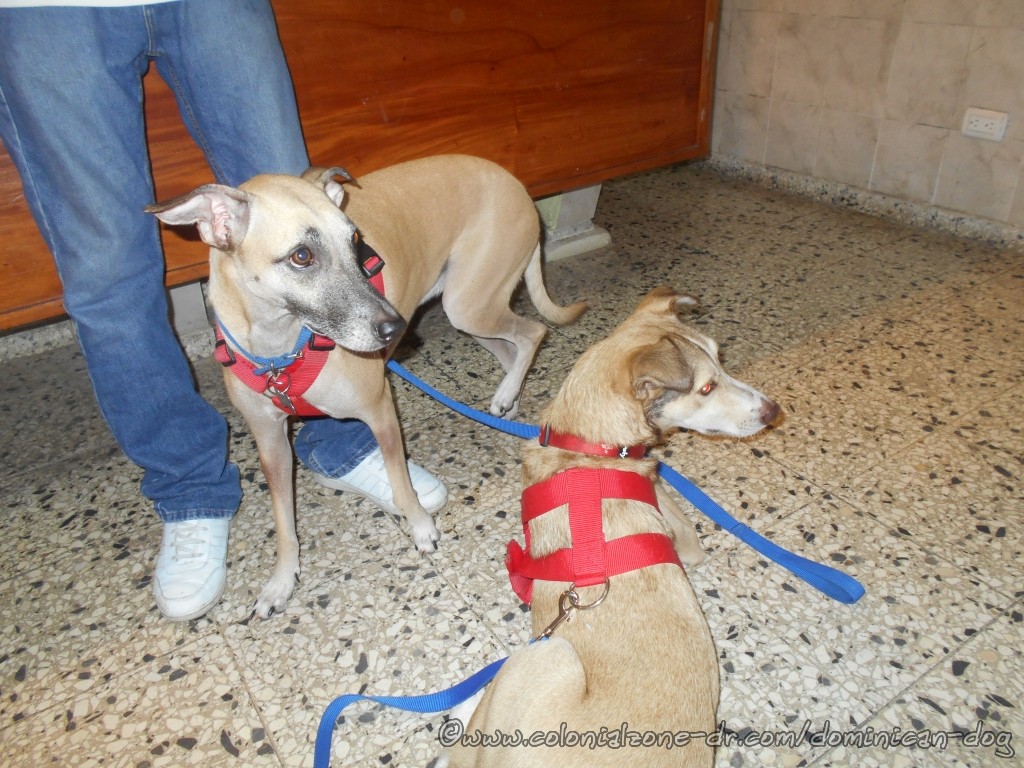 Buenagente and Inteliperra waiting to go to the green room

A very strange thing happened. Usually I am nervous and trying to pull on the leash but I psyched myself up to remain calm for momma so she could be really proud of me. Buenagente was a little nervous at first so I tried to calm him a little bit by giving him some kisses and whispering to him to relax. I was telling him that he is the star and he needs to behave like one. 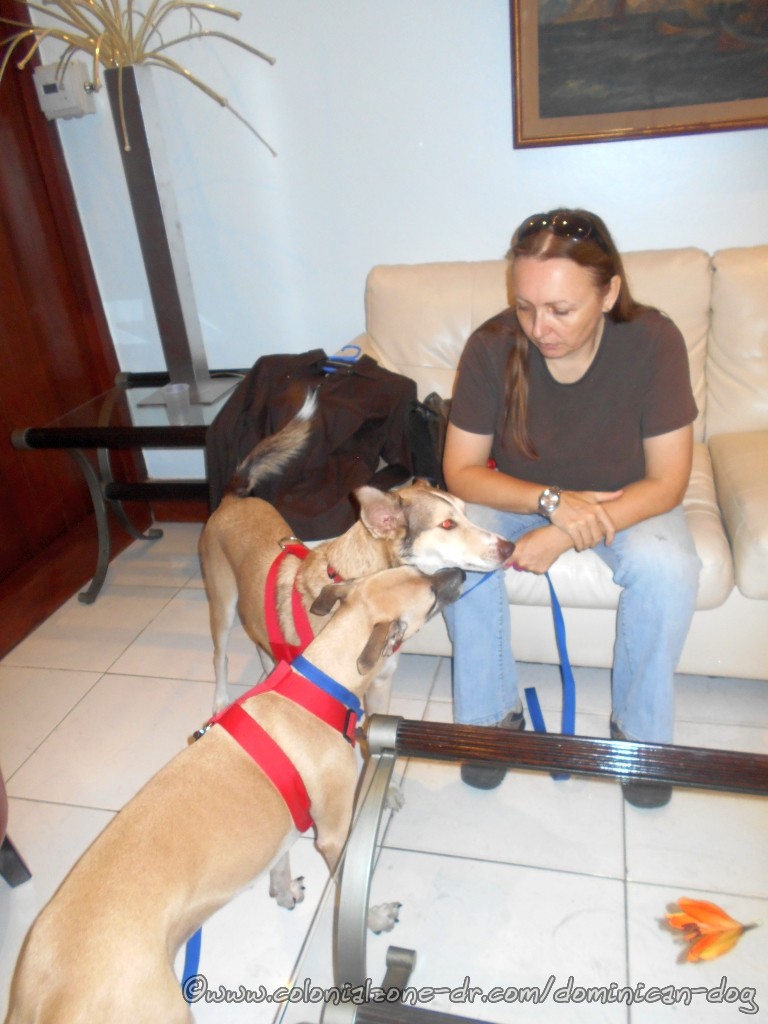 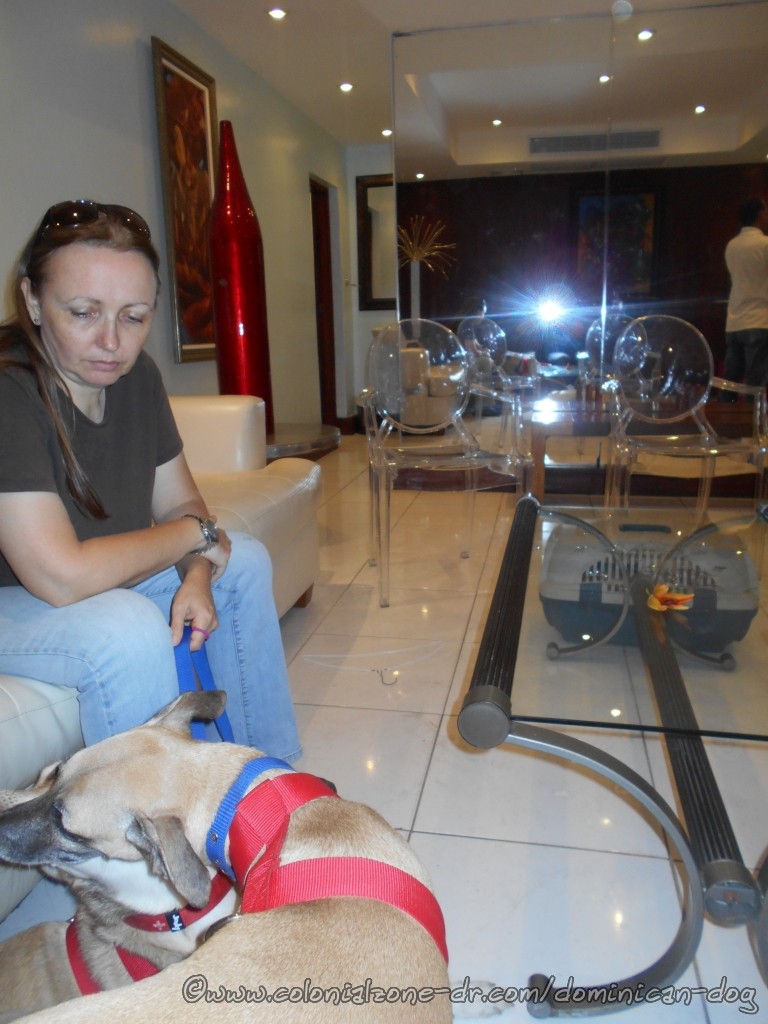 Inteliperra giving Buenagente a kiss with Aunt Kay looking on.

Both of us were checking out the amazing wall. I never saw anything like that before. An entire wall where I could see myself. We were trying to look behind the wall to see where those dogs were that looked just like us. Why were those dogs back there and trying to impersonate is? We wanted to find out why they were hiding back there. 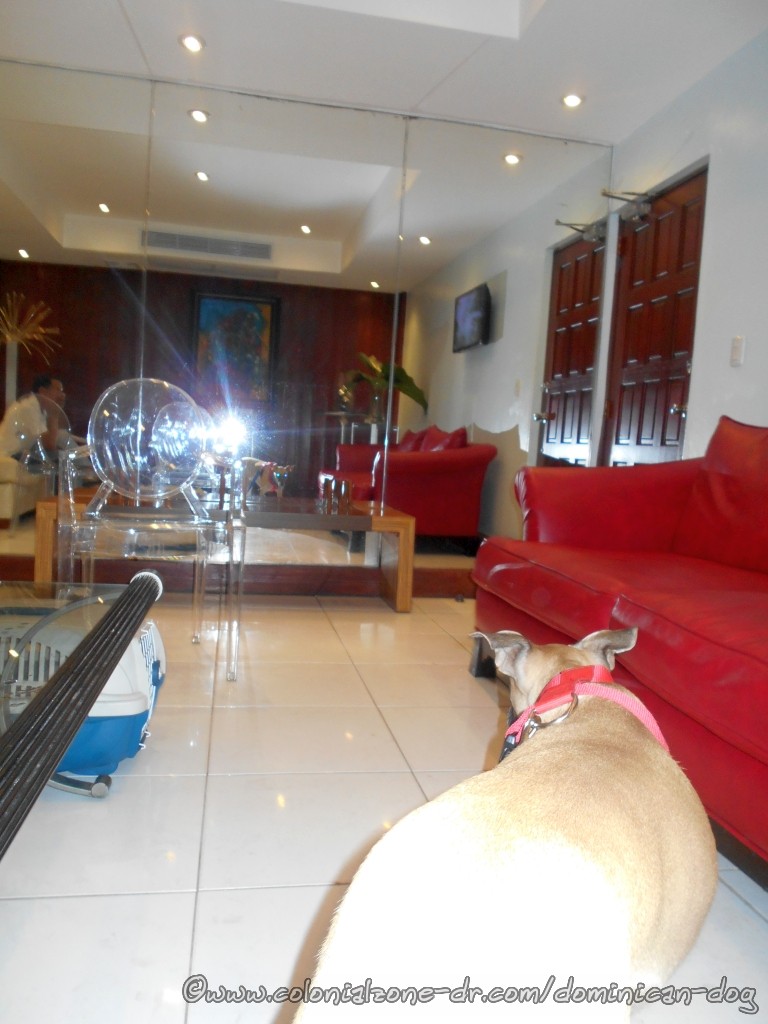 Teli sees another dog in the mirror.

I had to go and check this out a little closer so I snuck up on that dog-clone. I had to get a closer look. 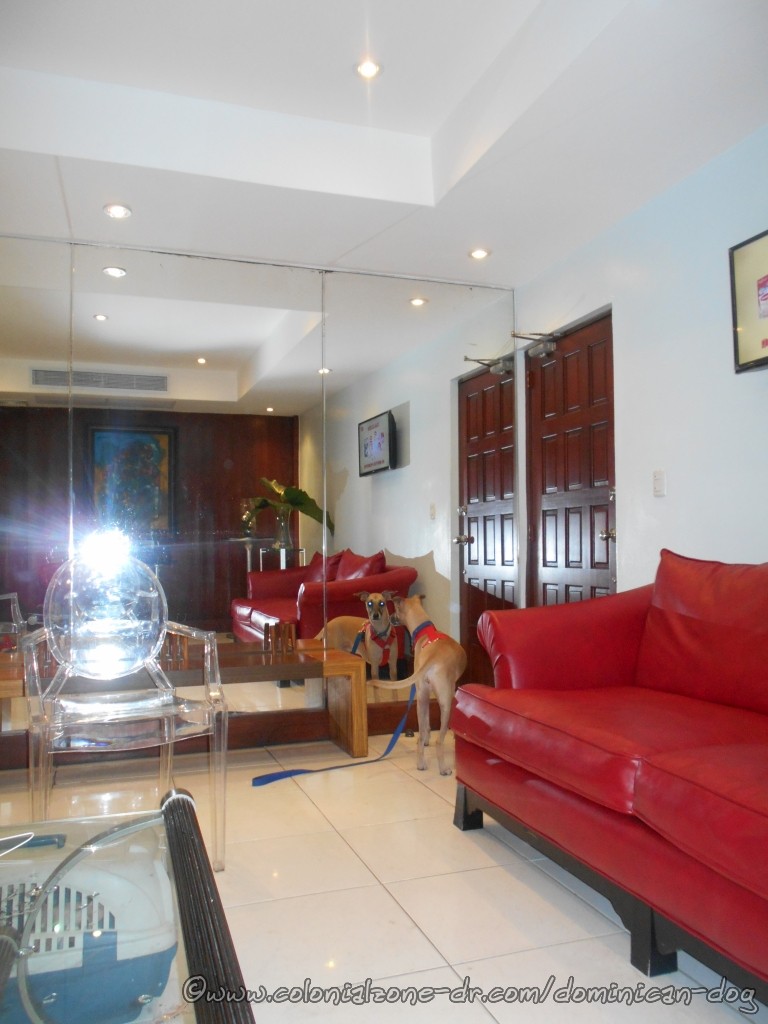 Teli getting a closer look at the dog in the mirror

OK. I figured it out. I realized that it was just me in there and I was not a threat to myself. I returned back to momma. All was safe. 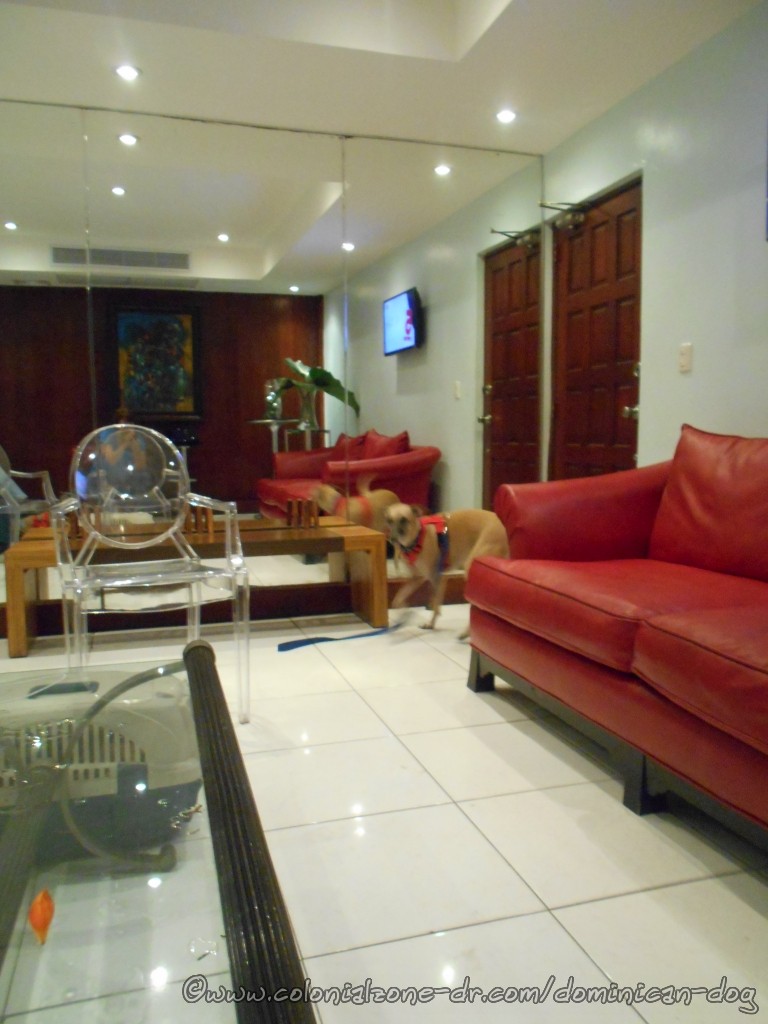 All is safe and sound

All of a sudden the door opened. It was Buenas girlfriend Fifi. She was coming in to check and see if all was OK. She had her baby with her. I think that maybe Buena was a little jealous because he did not run to greet her like he usually does. He just turned his head away. 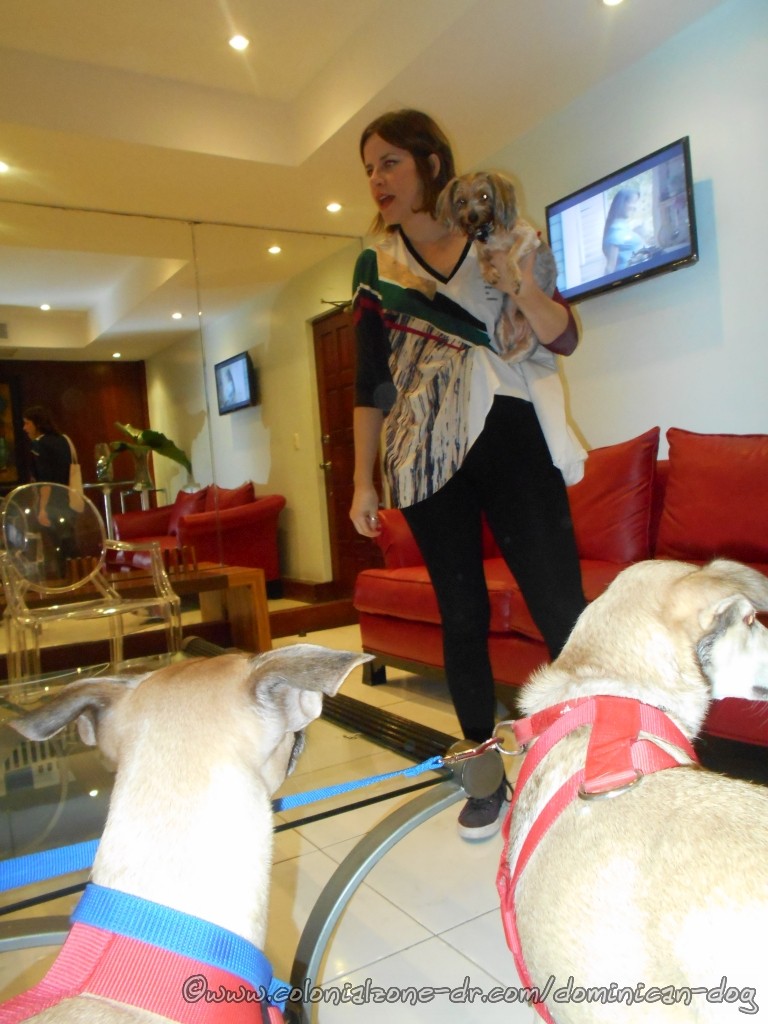 Fifi and her baby come into the green room

Finally Buenagente decided he would go and see his girl Fifi. She was trying to get him to take a picture with her but he was not being easy. Were they having a lovers spat? 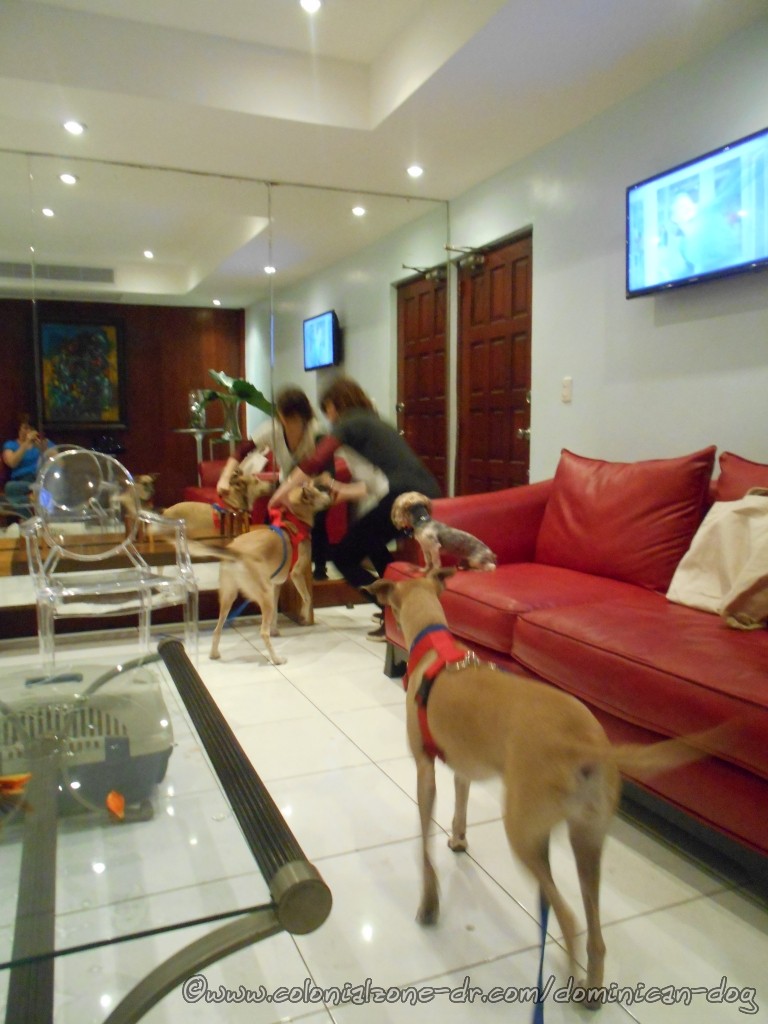 Buena and Fifi having a little disagreement while her baby and me watched.

Fifi finally got Buena in the picture taking position. I had to go over and make sure he was doing OK. 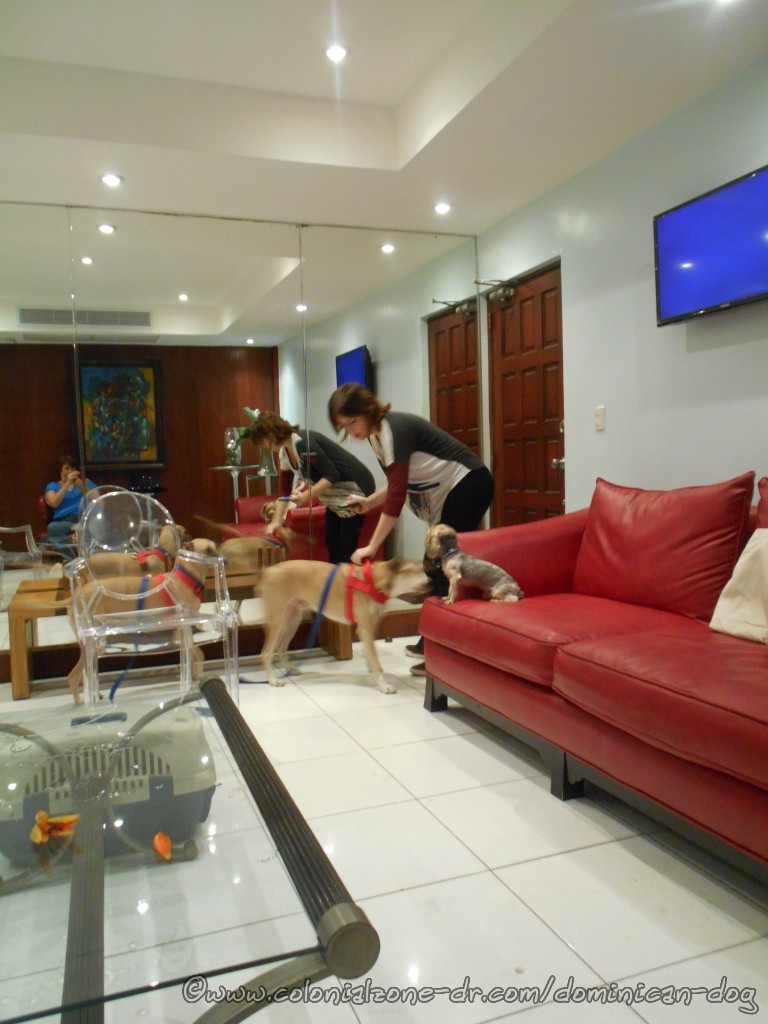 Teli checking up on Buena and Fifi.

We were all called into the studio to get prepared for the live show. There was the entire group of dog people there from some of the biggest animal protection organizations in Dominican Republic. 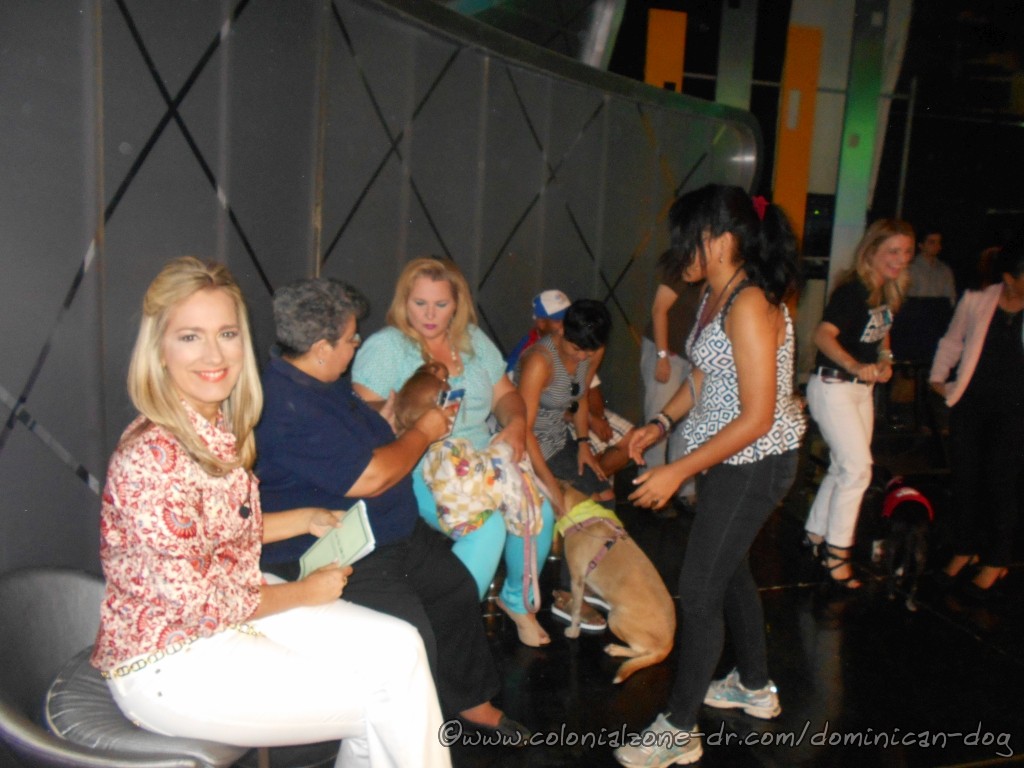 Getting ready to get on with the show.

The humans that were there included the dog lawyer that helped to get the animal protection laws past, Dra. Marilyn R. Lois Liranzo (Directora de la Unidad de Protección Animal del Miniasterio Público / Director of the Animal Protection Unit Public Miniasterio) along with Beatrice Simone (Fundación Mi Mascota Animal Rescue Dom. Rep / My Pet Animal Rescue Foundation), Jackie Troncoso-Voces, Wei Ling Gil (President of Barriguita Llena), Kay Aleksic (Buena and my Aunt and owner of Pet Plaza) and my momma Janette Keys. The dogs that were there included, Brownie (he was shot and thrown in the garbage), the little Chihuahua born with no front legs, Sirena (found at the La Sierna store where a watchman hit her with a machete and she lost her leg), Buenagente (the famous dog of the Colonial Zone), Inteliperra (me who was found as a puppy almost dead in a garbage pile in the park) and a few others. 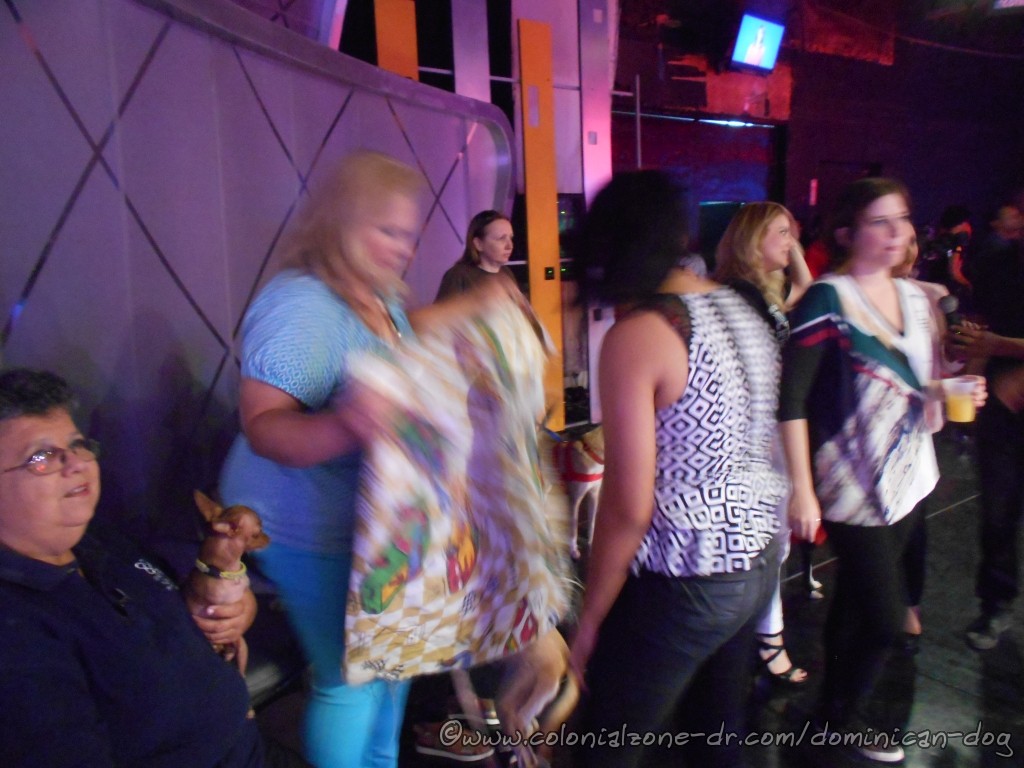 The humans were discussing some of the recent dog abuse cases and convictions that have already been issued in Dominican Republic. They talked about the animal abuse law. Then they presented some of the dogs that have been rescued and their stories. It was a very informative show and I was very good and listened closely. Buenagente got a little bored and took a snooze. He did not care that his pictures were on the TV. 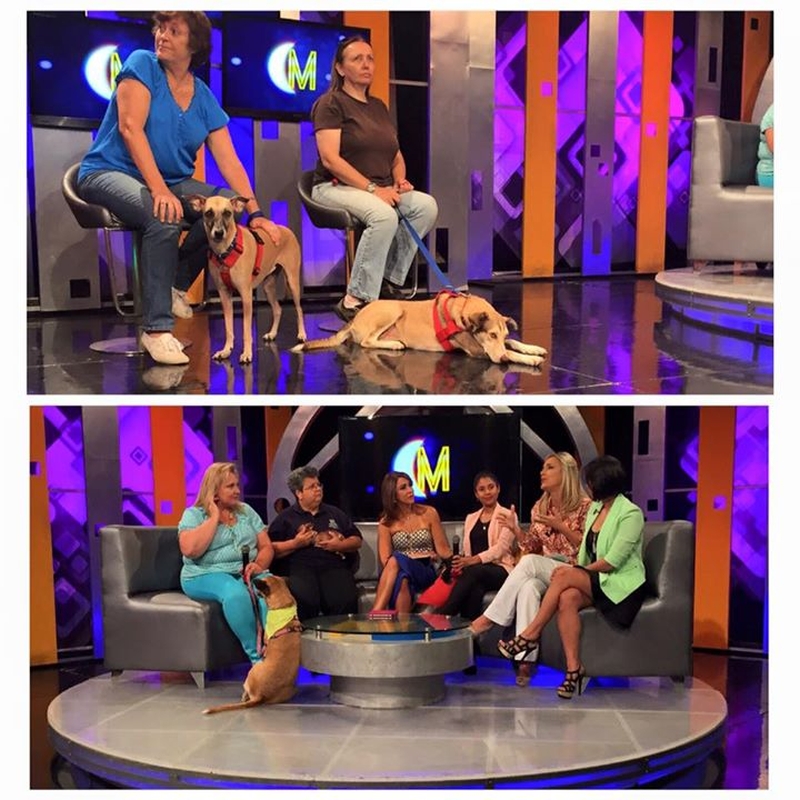 After the show was over they asked me to jump up and down but the camera cut off before I got to do my part. Oh well, it was about all the dogs. Buenagente was the dog star with all his pictures on the TV. 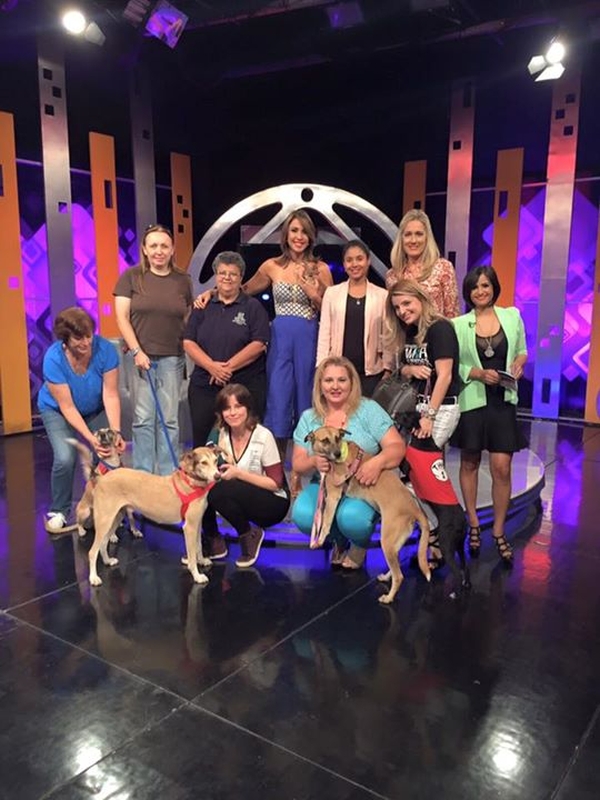 The whole group after the show.

This is the entire video of the show.

It was a good experience. I did some tricks for the people there. I pretty much just stayed in the background. Buenagente always gets the attention. I am happy for him. I have no problem being in the background and letting him be the star. I will just be his friend-sister and “la amiga de Buenagente” and share our momma together.

Oh, by the way, my momma officially adopted Buenagente. He now is part of our family. Buenagente “Buena” Keys, Inteliperra “Teli” Keys and our Momma Keys. I love my family.