Hi. Belinda the Great Dane here again. I now live in the mountains with the English Girl and her Dominican husband. I have a great life as there is so much to do here, and so many nice places to wander around. I have two other dogs to play with but they also have lots of other animals some of whom are very annoying.

I don’t mind the cats, there are three of them, as one of them washes my ears out for me and the others are great fun when I want to play chase the cat – they always get away though as they run up the trees which a Great Dane can’t climb at all. But what annoys me most are the chickens.

I don’t know how many there are as they are all in different enclosures and some of them are running around on their own in the garden at the back. They wake me up in the morning as they all start shouting at 6 o’clock and I need my sleep.

The worst of them is one they call Monster. 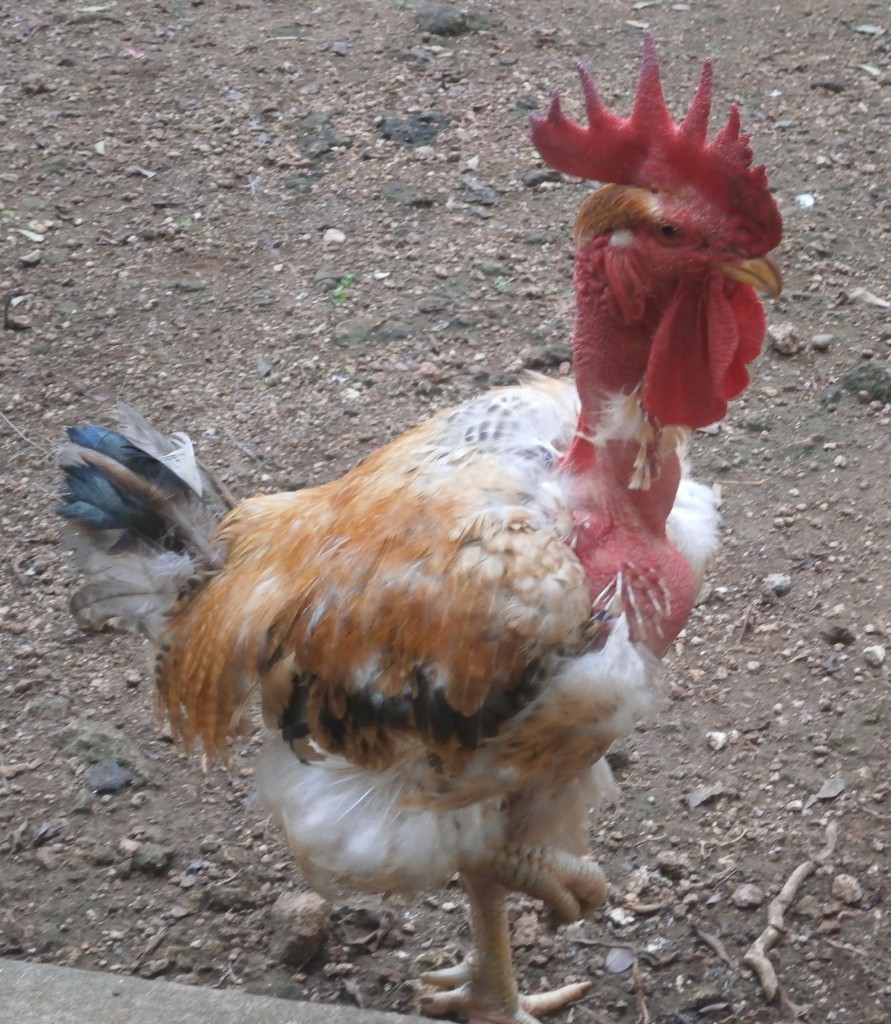 This is the rooster known as Monster

His wife is Mrs Monster and they wander around as if they own the place. 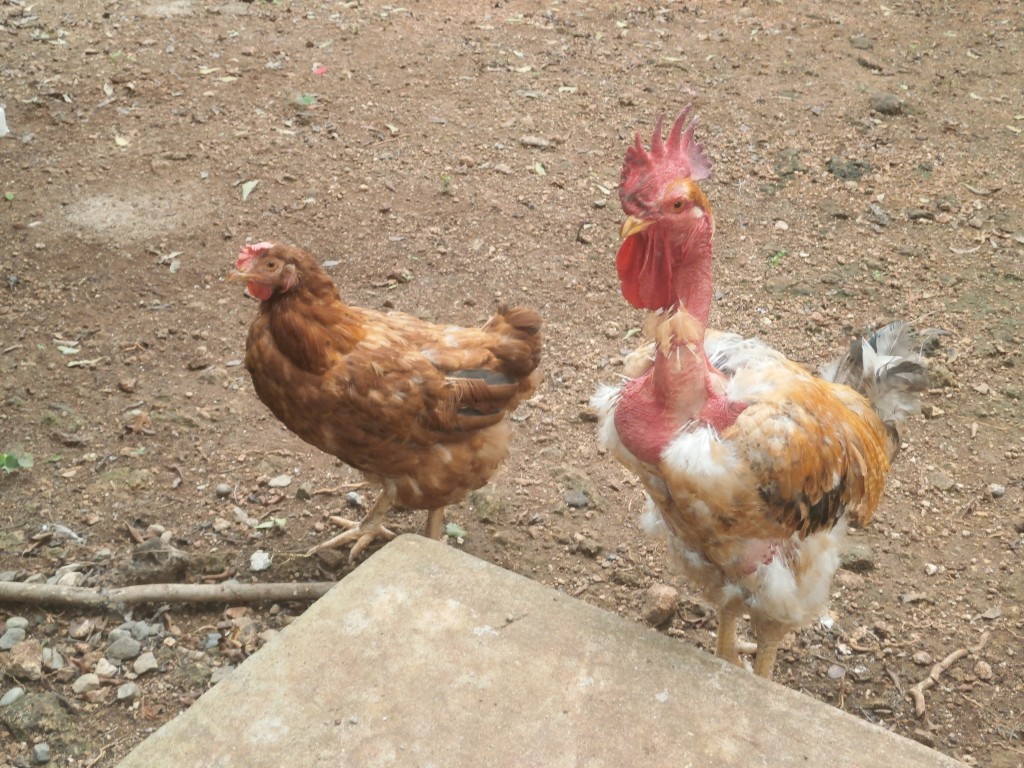 Monster and his wife Mrs. Monster taking a stroll

What has becoming increasingly annoying is that they stand at the back door and tap on it for bread and if anyone gets spare bread in the house it should be me. 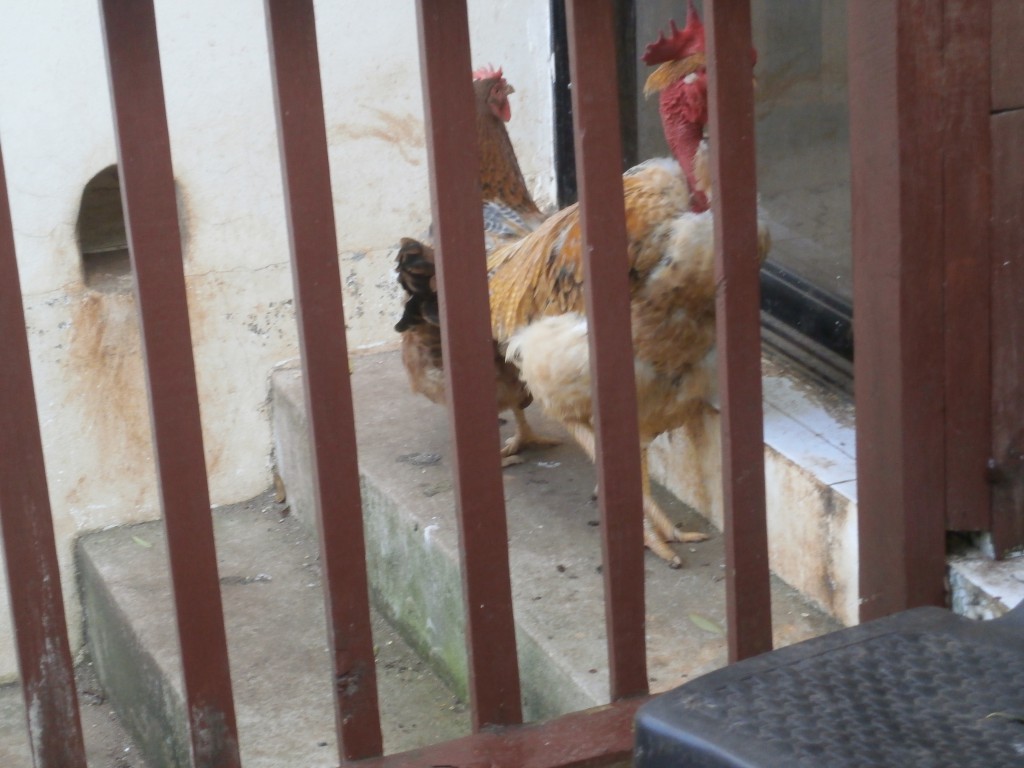 Mr. and Mrs. stand at the back door and tap on it for bread

They have taken up residence on the steps leading down from the house and if the door is open they just walk in! Chickens should not be allowed in the house and if I try and chase them out they make such a din.

Anyway, the other day I heard Mr Monster making a big noise in the back garden so I went to check out what was happening. 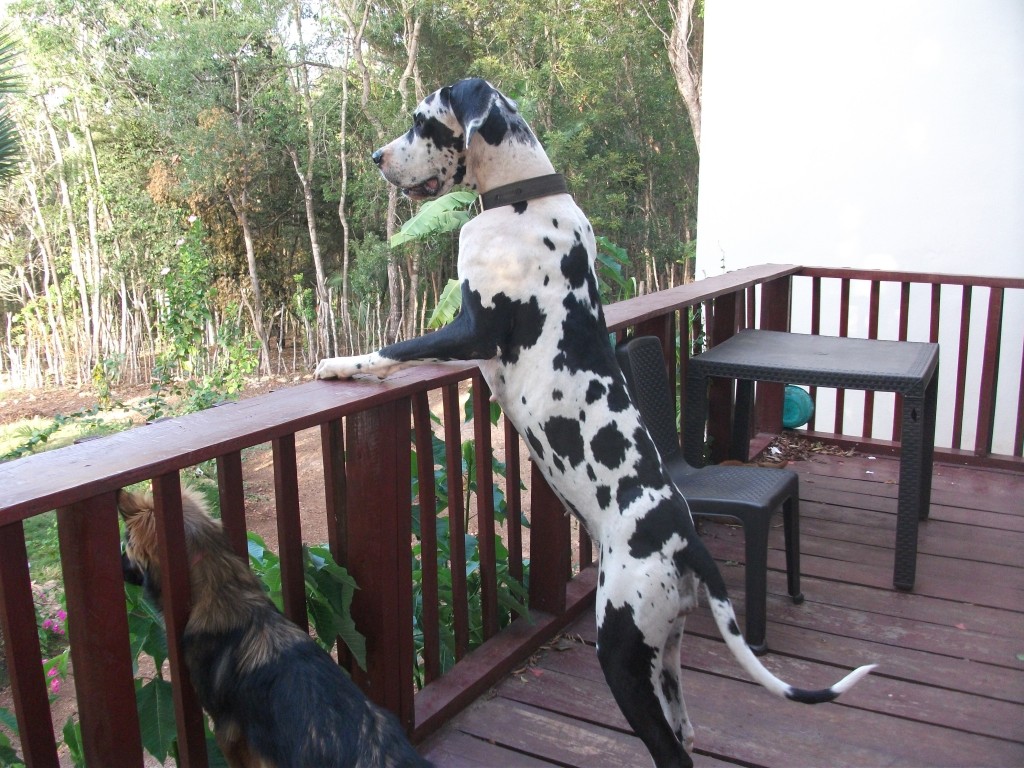 I heard Mr. Monster making a big noise and had to check it out

There he was hiding behind the barbecue which was a little strange and there was no sign of Mrs Monster. 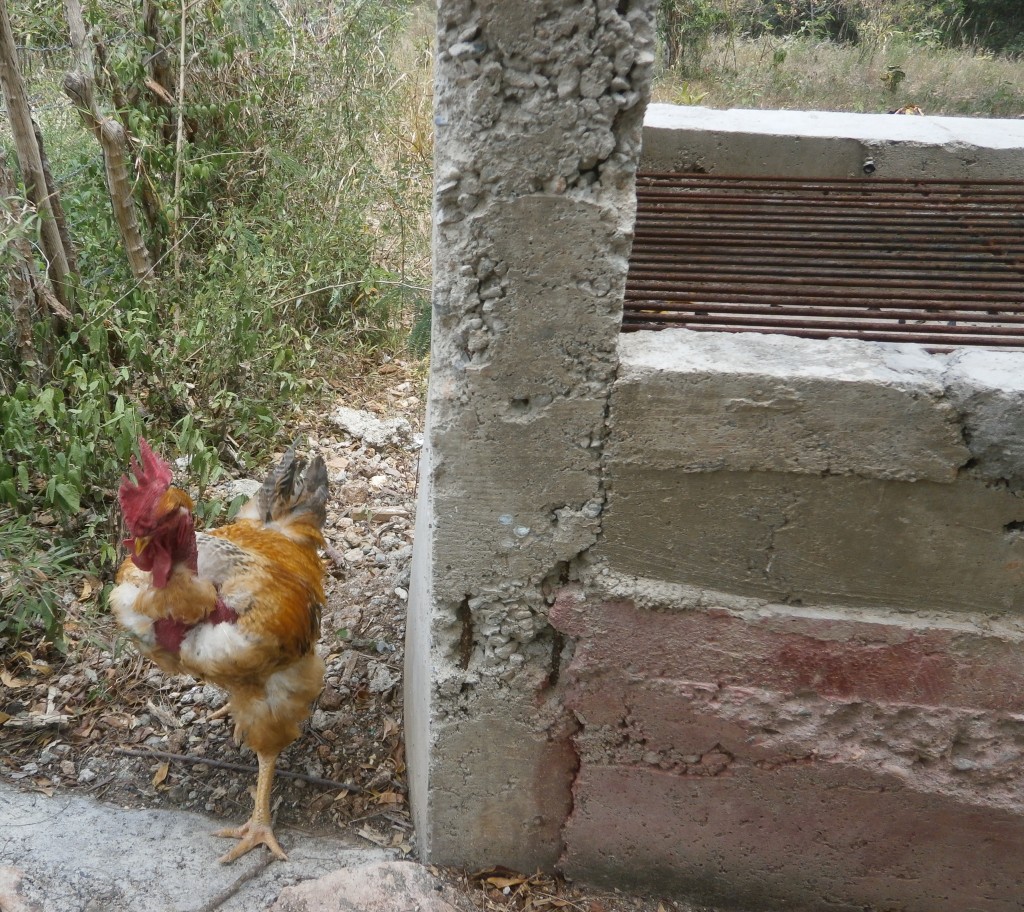 Mrs Monster was hiding behind the barbeque

Then I saw her. She was with another cockerel. His name is the Rapist as he is sex mad and attacks all of the hens and Mrs Monster seemed very taken with him. 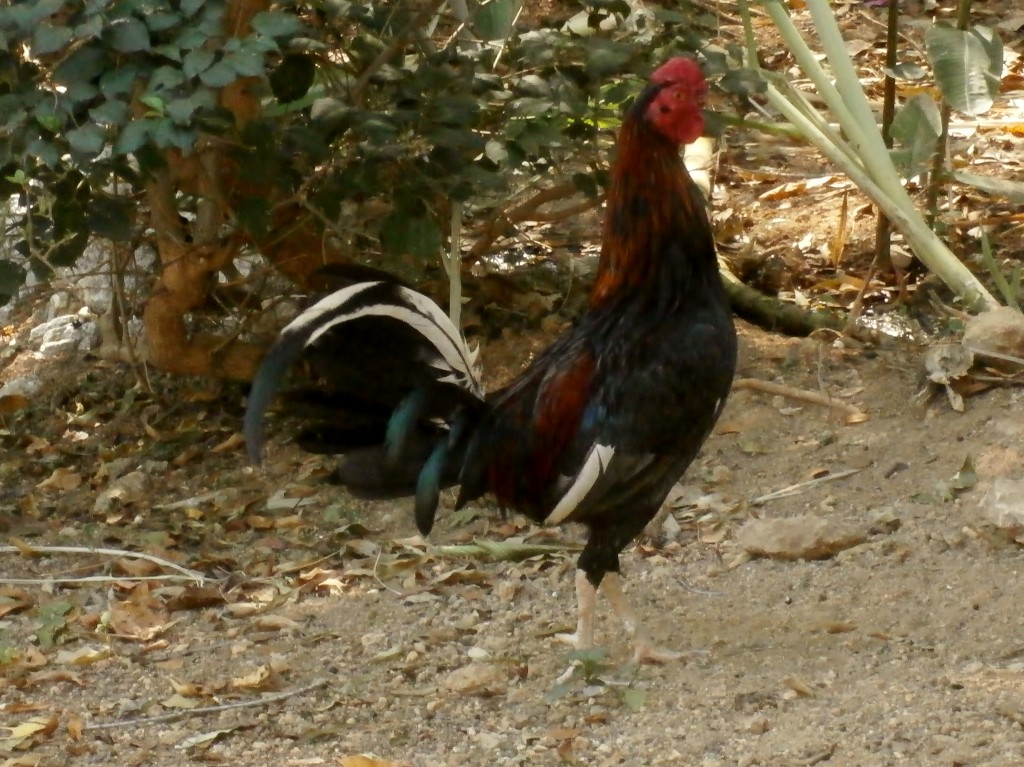 In fact that night she actually went to bed, well to her perch, with the Rapist in the cellar and left Mr Monster all alone in the dog crate he sleeps in. Poor Mr Monster I actually felt sorry for him and I had a chat with the English Girl and she agreed to talk to the Dominican Man and get rid of the Rapist to see if Mrs Monster would go back to her husband.

The next day the Rapist went to jail. 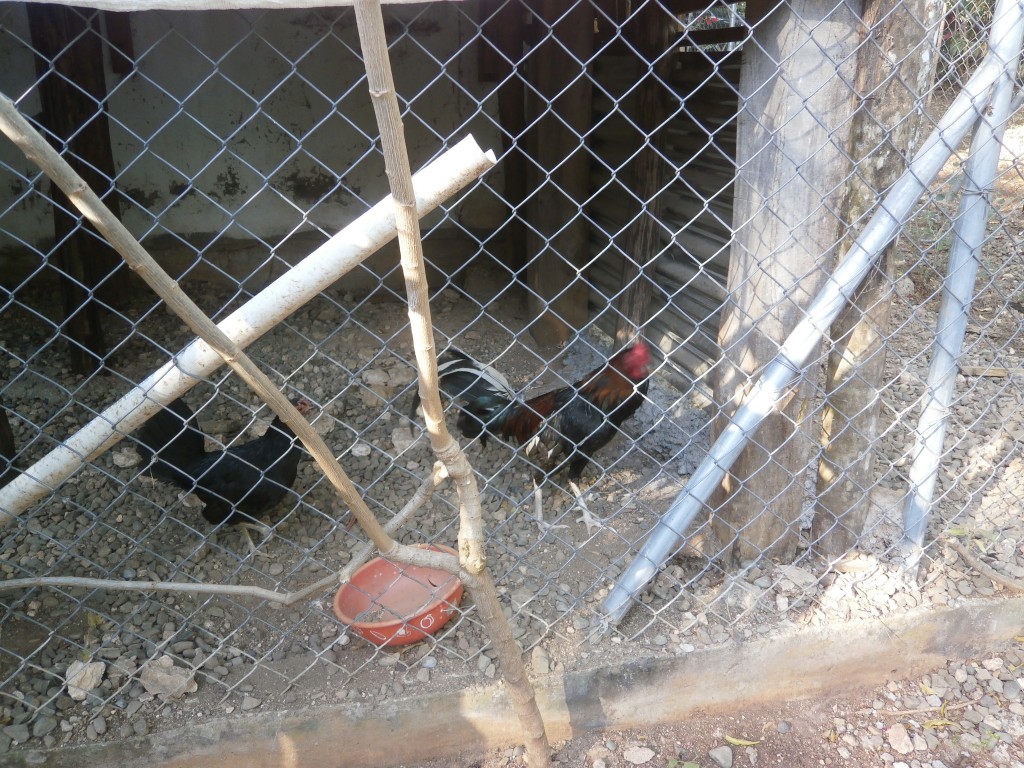 “The Rapist” was bad and went to jail.

And within minutes Mrs Monster returned to her husband and that night they were back together in the dog crate, so everyone was happy. 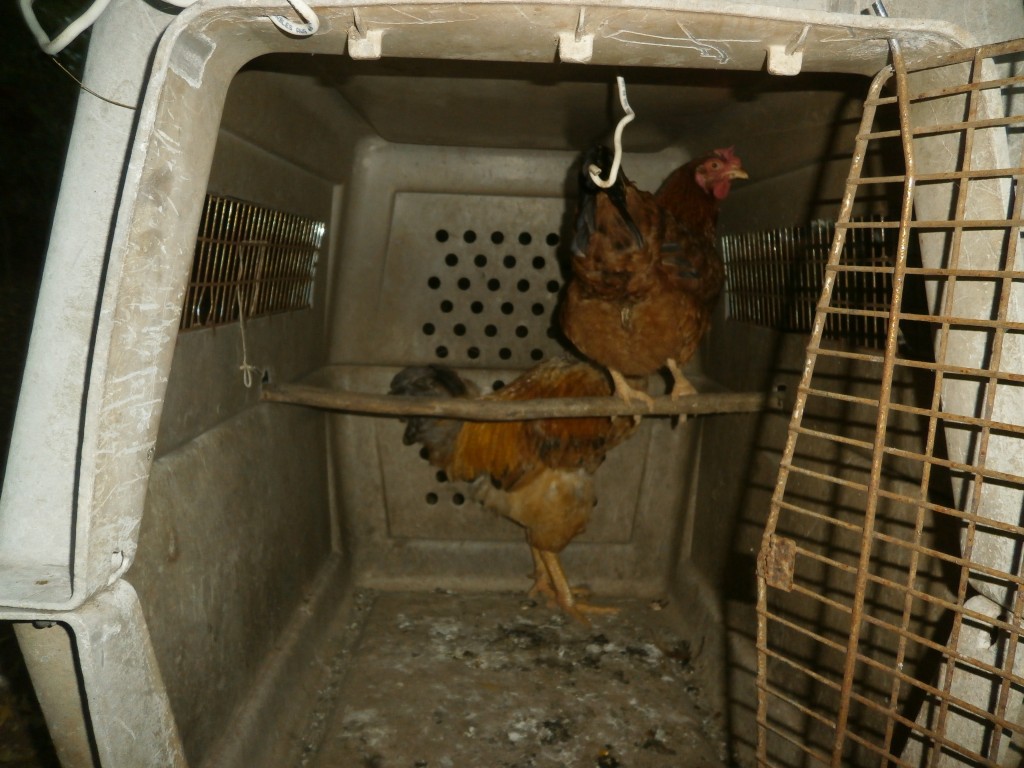 Mrs. Monster returned to her husband

So all is well again in chicken land, and, as the Dominicans say, Monster is as happy as a worm (as they live in earth and eat earth so are always happy as never hungry).