Christmas time is almost here. There are too many people in the streets being crazy. I do not like all the noise and the crazy humans out there woohooing and yipping. They complain when we dogs bark too much but they can go out there and act worse and make more noise than us animals. At least when we dogs bark we are saying something pertinent. Humans…gotta love ’em.

I went to Casa Reales. They were so nice to me. They said when there are not many visitors to the museum I can come in and check it out. They have the traditional Nativity Creche scene. The Mother Mary, Joseph and baby Jesus in the manger with the angel flying overhead. It was really pretty but moms camera just would not take a good picture so they are a little cloudy. She did not want to put them up but I told her that they were better than nothing and that if she was a good girl I would let her take me back and try for some better pictures. But, she has to be a really good mom or I won’t go there. 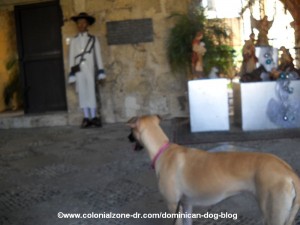 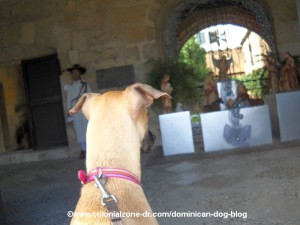 The big Christmas Tree by Coca-Cola is up at Plaza España. Mom says they do it every year but this is the first time I have seen it. It is really pretty and big. Wow! I wanted to go to Harry’s Bar and sit for a while, they are nice to me there, but mom wanted to keep walking. 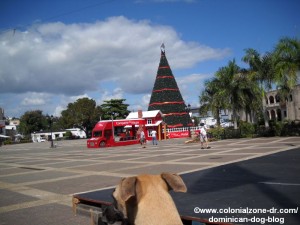 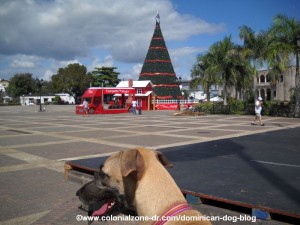 Mom and I walked around some more and came back to the Plaza when it was getting dark on our way home. We got to see the tree all lit up. The lights were so bright and pretty. I liked the top where it looked like the lights were dripping. There was a group of kids singing and talking on a stage. Mom tried to take a picture but none came out very good. 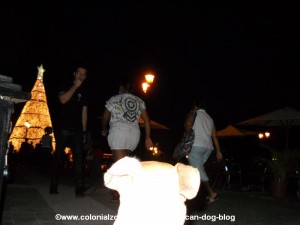 I was happy to get home. We made it just in time before the fire works started. I do not like them very much so I was happy that I could hide away in my house for all those banging noises. Mom and I had a fun time. I hope there will be more Christmas pictures coming soon.