We were walking around and we were just in time to see them take the flag down at the National Mausoleum called the Panteón Nacional and in English The National Pantheon. This is the place where all the Dominican Republic important people are interred. I am not permitted to enter there but it is OK. I do not think I would like the smells in there even though it looks very beautiful from the outside looking in. My nose is very sensitive, remember that I am a dog.

We were talking to the nice man in the uniform but he had to excuse himself to take down the flag. 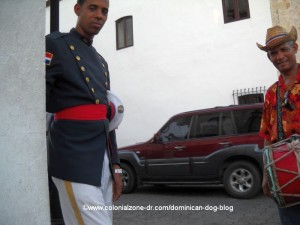 We all had to stand at attention and watch the man that was talking to me take down the flag. We were looking and waiting and the rope got stuck so it took a little longer than normal. 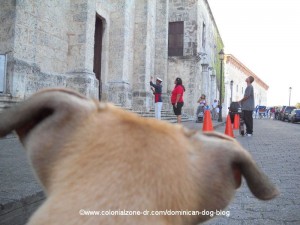 But the flag of my country, La Bandera de la República Dominicana, finally came down and was neatly folded. We then continued on with our walk. 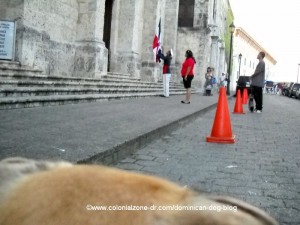