As with most people the first time I heard mention Mamajuana the green smokable substance cane into my head. Wondering why they could just sell it out right in Dominican Republic. I found out they are not alike what so ever.

Mamajuana is a drink, a very potent drink. It resembles Spiced Rum or Ron as it is called in DR. A sweet drink with a zip of spice that makes it quite unique.

I had no idea what it was and asked Carlos about it when I was still a tourist. He took me to his car and opened the trunk. He had an old gallon whisky bottle filled with a nasty looking liquid with bits of junk in it. He told me I could have the bottle to take home with me. I had no idea what it was so I stupidly declined. He never offered me a taste, which I would have tried because I’m always game for trying something new. I really had no idea it was alcohol or I would have taken a swig without an invite.

When I got back to USA and non vacation life I looked around on the puter for more info of DR and found a forum. There was a section about Mamajuana. This is when my eyes were opened to the treasure of this drink. I made a mental note that on my next visit in 3 months, I had to try this stuff no matter how ugly it looked.

So there I was again in the beautiful Dominican Republic hanging out with Carlos at a Colmado with some of his friends. Out comes the bottle of Mamajuana. A styrofoam glass was filled with ice from a bag then the mamajuana was poured on top. There was a few floaters on the surface of the drink but I have no problems with stuff like that. I had camped all my life and when you camp there’s always some of the flora and ash in the food that’s consumed.

I put the glass to my mouth ready to take a little sip. Didn’t want to guzzle yet. I noticed that the people sitting on the plastic chairs in our circle were all watching , waiting for me to take my first swig. All had a sort of evil, knowing smile on their faces. I had read that it was an aphrodisiac and this I remembered at that moment. I took my initial swig, letting the amber liquid flow slowly down the back of my throat. Of course I had to play it up a bit. Dominicans love to laugh at tourists doing new things so I made it good. Closing my eyes I pretended to get a chill, sort of a hot sexy chill. Finished it off with a semi orgasmic ahhh.Opened my eyes slowly with a satisfied smile on my face. There was a girl next to me with her lower jaw dropped to her chest, others were just looking at me with stupid looks on their faces. I started laughing. They looked too funny. Said an Oh Baby Baby, and that was it. Everybody laughed.

I didn’t know much Spanish but I said caliente. Carlos came over fast. I think he was wanting to get me to the hotel and fast! I loved it! Then I explained in my spanglish that it was a joke and we had a great time the rest of the night. I had a few more glasses of Mamajuana of course with some beer to back it up. Beer goes with everything.

So the next day I told Carlos I had to have me some of that stuff to take home. Of course he had some relative that sold the stuff so off we went to the market.

I’m not sure exactly where we were but it was a large market under roof. We came to it the back way. Walking up to it I could not believe they sold food in a place that looked this way. Where was the FDA inspectors?! I saw something that I’ll never forget as we walked up to the building. It was pure National Geographic. I wish I had a camera with me to have taken the picture but then maybe I wouldn’t have. I hated taking pictures of people as if I was gawking at them, but this would have been a prize winning picture.

There was a man sitting on the sidewalk with his back up against a wooden fence. The gutter was flowing with red tinted water ,not right next to him but very close in front of him. This man was not paying attention to anything, he was into his own thoughts. He had no legs. They were missing, one just below the knee and the other was mid thigh. He was sitting in the center of a bunch of chickens, maybe 20 or so. All these chickens had their legs bound with string and were just laying there looking around. This scene struck me, here is this legless man sitting in the midst of these leg bound chickens. Blood running in the gutter. Where is National Geographic when you need them?

Anyhow..we entered this market. All the sights and sounds of a market are quite interesting, especially when it is my first time seeing anything like this. We passed a table with long pea looking brown pods piled on a table. I was asking all sorts of questions. These were Tamarind (spelt wrong, sorry). Carlos opened one and let me taste it. It looks really ugly but tasted quite good. We were coming upon a booth where there were a bunch of chickens. At this second I slipped and Carlos grabbed me. Thank goodness he did and that I didn’t fall. I slipped on animal guts laying on the floor! Chicken guts! The booth was a murdering place for those unlucky, leg-tied chickens. It was nasty. Blood and little pieces of raw flesh laying about and those poor birds. I was just amazed that they killed them where all could watch. 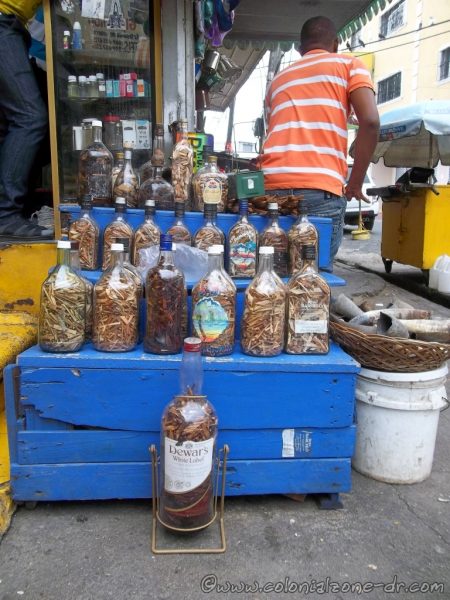 Carlos dragged me away from this spectacle. We entered a small booth lined with bottles of all shapes and sizes. Different labels, half missing but all filled with wood chips. The stuff I put around the trees in my yard. All stuffed into these discarded old alcohol bottles. We were in the Mamajuana buying place. We had arrived.

After the greetings and hugs the purchasing of the mamajuana commenced. I decided on 2 bottles. They were already primed with the wine so they were ready for the rum and honey additions. Then He opened the bottles, pulled out a plastic milk jug filled with a thick black-brownish liquid. Really nasty looking stuff and the jug wasn’t the cleanest on the outside either. He opened my bottles, stuck in a funnel (same cleanliness as the milk jug), and without asking, slowly poured this liquid into my bottles. He maybe added a cup, more or less. Then he closed up the jug and put it back under the table where it came from and covered it again with a cloth. He pulled out a stick and started jamming it into the bottle. Jamming it down hard, mashing all the black junk into the wood junk. So all the junks became one.

I kept looking at Carlos while this was happening to get the idea if this was normal or if I should run. Carlos kept giving me the wait hand motion saying that it was all OK.

The uncle capped, bagged and handed me the bottles. Carlos paid him for them. He said he wanted to treat me to the mamajuana so that when I was in USA drinking it I would think of him.

So all was good. I took them home, no problems on the plane. Filled them with the rum and honey. Gave them a few weeks to cure.

I was talking in Latin Chat one night on the puter. I really didn’t talk. I just waited for personal messages and could only say the basic stuff in Spanish. I went there to try and learn. Took notes of words I didn’t understand and asked English speaking Dominican friends to interprete. Anyhow, I did say hola and that I was drinking mamajuana. As soon as I said that about 20 men private messaged me! It was too funny! The ones that did speak English I told that my dog, Sniffy was drinking it also. Sniffy loved it. I set my glass on the floor and went to drink some and it was empty! So we shared. (now you understand why it didn’t bother me a few pieces of stuff in my drink, I share my drink and food with my dog)The chatters weren’t interested in my dog. I didn’t talk to them but for a few lines because I KNEW just what they were interested in at the mention of Mamajuana.

Buy your own Dominican Republic Mamajuana

2 thoughts on “My Mamajuana Experience”